The Unexpected Ignorance to the Virtue of Video Games

Picture this. Woody Allen’s got a new film coming out. He’s promised a rich story, full of lovable characters, a great plot, and sexual abuse allegations. The hype builds, but there are mass walk-outs at the premier. The film is just walls of text, one after another, for two hours. The text is well written, indeed delivering on Allen’s promises, but nothing like the ‘movie’ people expected. The film is a flop. “Why make a film like this?” ask critics. What you’re trying to make would quite clearly work better as a book! The public jests about the film, before forgetting it and moving on.

And that’d be the end of it. But in video-gaming, this absurd hypothetical of mismatching the medium with what you want to convey is a real, common occurrence, and is seeing a real heyday with the recent spate of walking simulators.

We’ve had The Bunker and Virginia in the last few weeks, Firewatch and Everybody’s Gone to Rapture in the last year, and Dear Esther from 2012 appears to have made a lasting psychic scar since everyone still remembers the name. These games, where the focus is very much on telling you a story, over which you have varying amounts of impact depending on the game, are like Woody Allen’s hypothetical movie. Their chosen format is not conducive to what they want to convey.

This issue is that these walking simulators put the player into the narrative as a character, often from a first-person perspective, which is a terrible decision. Player agency is essentially a randomizing element in the actions of a character. A player can, at any time, completely break from how they’ve previously acted with no justification presented within the narrative. If that were to occur in any other character we’d call it bad writing, and we shouldn’t think of ourselves as anything but another character within the narrative. After all, that’s the position we’re willing put ourselves in by playing the game. So we shouldn’t be lenient with this inclusion of player agency – constantly offering the chance for a character within the narrative to be a poorly constructed character is sloppy and, frankly, weird. One might say that we can act out, that we can try to have our character behave in a consistent manner. But why have player agency then? At best the player would only need to define the personality of their character at the start of the game before putting the controller down and watching things play out. This first-person, player-controlled character does nothing to actually service the narratives these games are built around – but if you wanted to make a walking simulator have a story at the center of your game, why did you purposefully worsen it with this kind of player agency?

Admittedly this is not the whole picture. Some games don’t even deign to give you the illusion of choice, at which point you’re essentially holding whatever button advances the narrative. They don’t matter to this article because that’s not a game. That’s holding down play on a faulty TV remote.

Some might reach for the argument that with a first-person view and player control, we can explore the world the narrative is set in, in a way that TV and films simply cannot. Yet films like the recent Mad Max: Fury Road quite clearly demonstrate that within a film format it is very possible to present a tactile, plumbable universe that the viewer can explore within the frame. All the small details you can encounter in first-person within a video game that enriches the world can just as easily be encountered from a third-person perspective, by noticing details or pausing the screen and picking through it.

This is not to say walking simulators are mistakes, but their choice to portray their stories through the format of a video game is. The format of video gaming, something that relies on player agency, is at odds with our (at the very least, classical) notions of what makes a quality narrative. 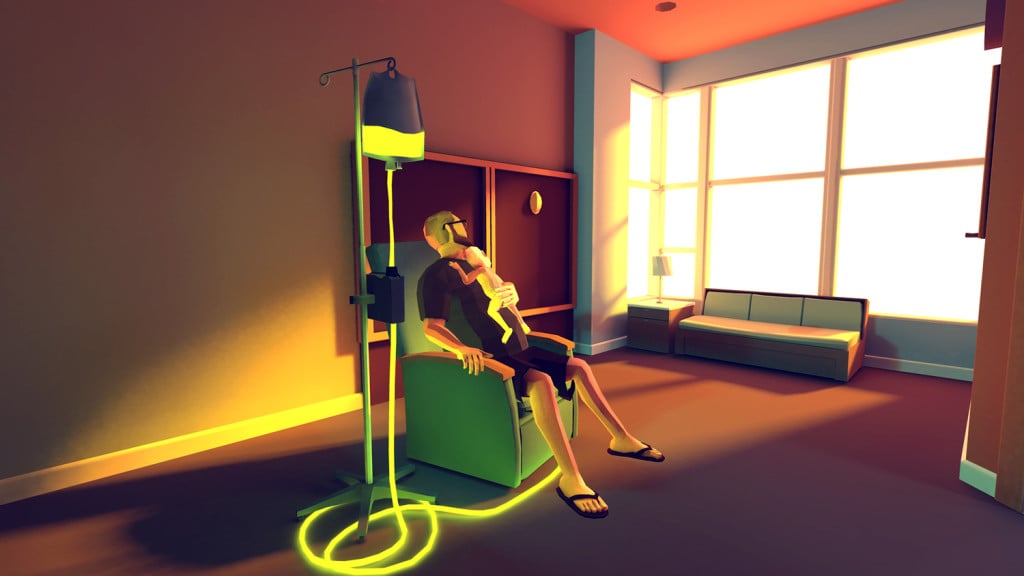 I suspect the reason there currently isn’t as much focus on this issue as there could be is due to video gaming’s genesis. A lot of time has been spent trying to make video games into something other than video games. A lot of early games were imitations of sports and pre-existing analog games, and many games as of late appear to wish they were blockbuster action movies, so I can understand why game developers might try to make something that isn’t a video game in video game form. But we have to mature. The current circumstance is unhealthy for all formats, as talent is squandered on weak games and stories are squandered on a format that doesn’t work for them.

This all may sound like a condemnation of walking simulators. It is not. Many of these stories are intriguing, original, and should be told, and the argument could just as easily be applied to some of Telltale’s work or anything David Cage has ever made, and so on. Writing this article reminded me of The Last of Us, which is a truly fantastic movie, which has unfortunately lost a third of its footage and replaced it with a rather bland stealth/survival/arena shooter. The replacement of that footage with a video game did not service the story that the entire thing was focusing on nearly as much as actual footage would have. So why was it there, and why did we think The Last of Us was good as a game?

Relative to the likes of literature, video gaming is but a fledgling medium, as of yet unable to stand alongside the giants. If we want it to, we need to start appreciating it as its own medium, otherwise, it’ll just be stuck as a lesser format playing second fiddle. We need to start striding forward by respecting that the format has its own strengths and by playing to them, rather than standing around wasting what could be good work to ignorance of a video game’s weaknesses. Unfortunately, walking simulators are walking in the wrong direction.