Dragon Quest is a monster of a series, and one of the big 3 older series in Japan alongside Final Fantasy and Shin Megami Tensei. It’s the forefather to most JRPGs, and set the foundation for what plenty of games, RPG or otherwise, use when constructing narrative or gameplay. Dragon Quest XI: Echoes of an Elusive Age feels like the peak of what the series can do. It’s a highly polished and refined game that makes use of only the basic building blocks of RPG and narrative design to create a solid, and enjoyable experience. 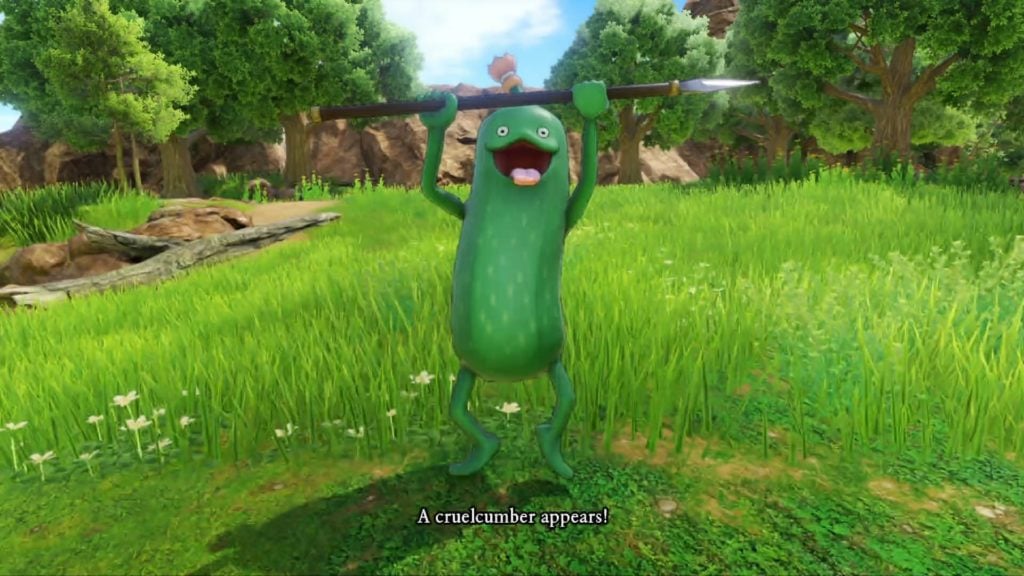 The story of Dragon Quest XI is paced very well. The game is broken into smaller, chapter-like, mini-stories instead of one over-arching plot. Your position as the luminary is one of hope, and while your goal is to defeat the Darklord, you also get to take opportunities to help the lives of those around Erdrea. It’s a “by the numbers” plotline when compared to most other Dragon Quest titles, but it does throw a few curve balls every now and then. Despite your role as the hero, you ’re labeled a villain by one of the land’s most powerful kingdoms. It turns your journey into one of redemption and proving to the other kingdoms of Erdrea that you’re not the evil dark spawn your falsified reputation has you painted as. The story plays out across roughly 60 hours of playtime with maybe an extra 30-40 that are filled in by side-material.

Despite the game’s length, it’s very easy to sit down and play through an “episode” or two a night and feel like things are constantly moving along. While the game isn’t presented in a chapter format, it plays out like one. Every location you visit or major character you encounter has a story and culture tied to them. IOften these differences are brought about in the localization and script. The Japanese mythos-inspired town speaks in haiku, and races of fantasy creatures speak in rhyme.  It builds Erdrea out to be a massive world. People talk and react differently from town to town, and it prevents everything from feeling similar. You never spend too long in one particular place, so the cartoonish accents and odd speaking patterns of certain people never become grating and instead add flavor to the story and writing. 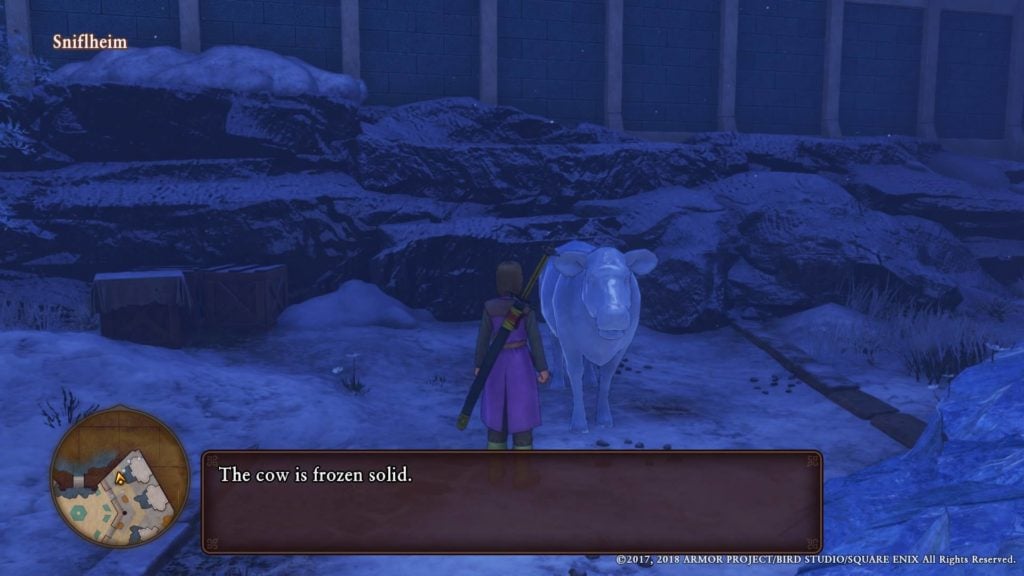 Truly the darkest of timelines.

The flipside is that often times these town arcs are very short, and the character growth in them can fall flat. There were at least two or three chapters of the game where things felt rushed or the cast started to act inexplicably out of character from how they had been for the entirety of the game before. Revelations are had without any real lead-up, but these events are few and far between. It’s off-putting, but not unforgivable. The few instances of inconsistency are far and few between compared to the rest of the story. The writing, voice acting, and pacing help make Dragon Quest XI’s story is one of the strongest the franchise has had in a very long time. 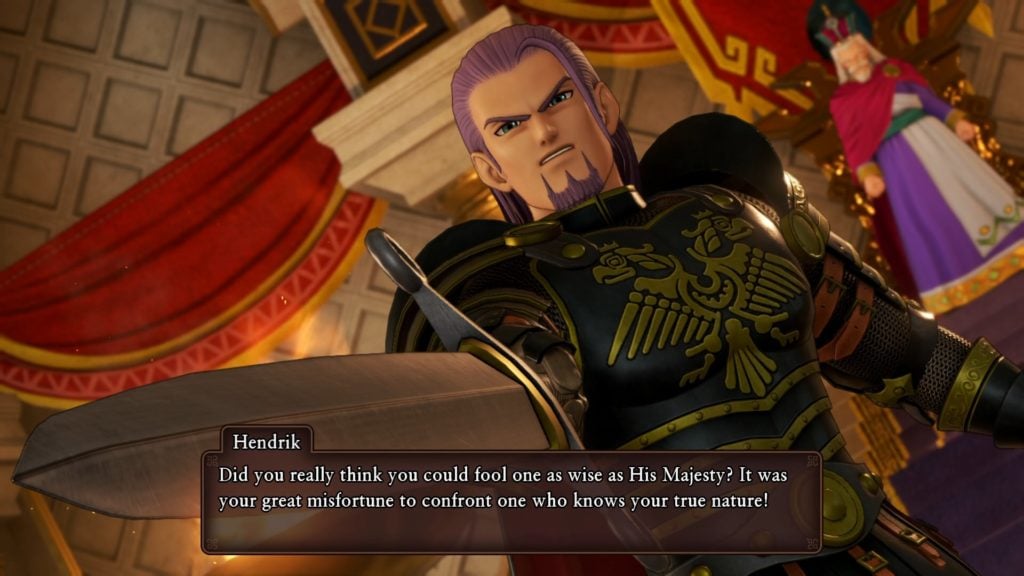 One of the more interesting aspects of the plot is how Dragon Quest XI handles direction. The story starts linear and begins to break to a more open setting as the game goes along. There will be certain scenarios where you can choose to do things in a particular order. You’re given a list of tasks to complete, but not the direct order in which to do them. Post-game is a large open world that has you tying up loose ends and side-quests across the continent at your own discretion. The downside is that the difficulty spikes randomly between the myriad of tasks you can do. There’s still a “directed order” that it feels like you’re supposed to do things despite the game letting you go anywhere. Sometimes grinding is the only way to reach a suitable level to deal with certain encounters, but the areas you can best farm experience in aren’t always obvious. Erdrea is an ever-growing world, and changes as different events play out. It’s interesting to see the development team create multiple versions of the same area, but it can get confusing in the post-game when you’re trying to figure out what side-material you’re best prepared for. 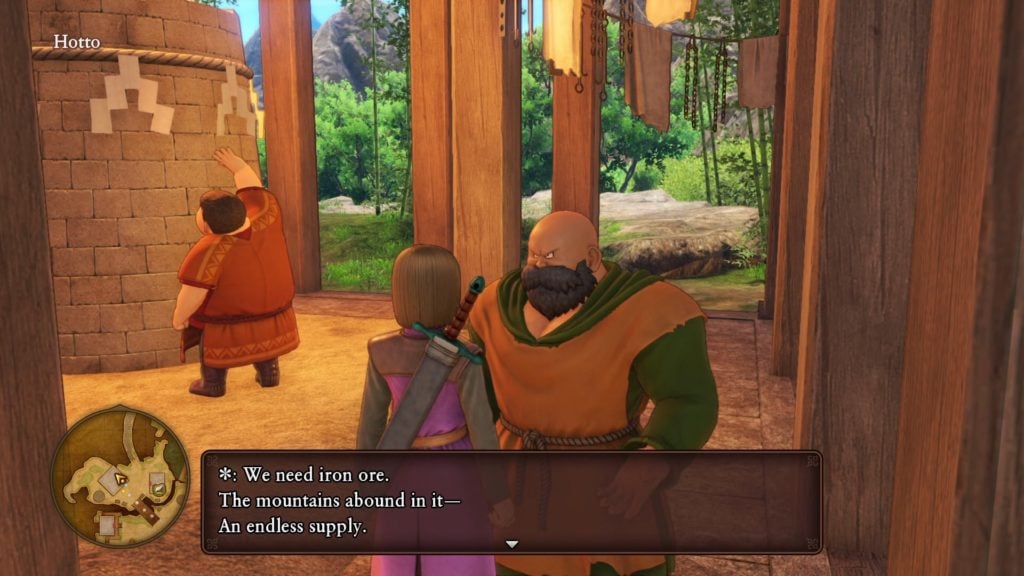 Combat plays out in a basic turn-based format: activating abilities, slinging spells, and brandishing blades against your foes. Matches aren’t just mindless button-mashes though, and you have to work proper team compositions along with buffs and debuffs to deal with certain enemies and encounters. There is never a party member that doesn’t have a use. Planning how to properly play to a certain character’s strengths is often the key to getting through tough encounters or having to face the continue screen.

Boss battles range from fun and memorable to frustratingly hard. The difficulty for many of the more agonizing bosses boils down to dodging status effects or surviving multiple waves of attack. Bosses often get two or three actions for each action of the team, and this can lead to full-party wipes if a boss happens to land a lucky critical hit or the RNG decides to use both turns for multi-hit attacks. 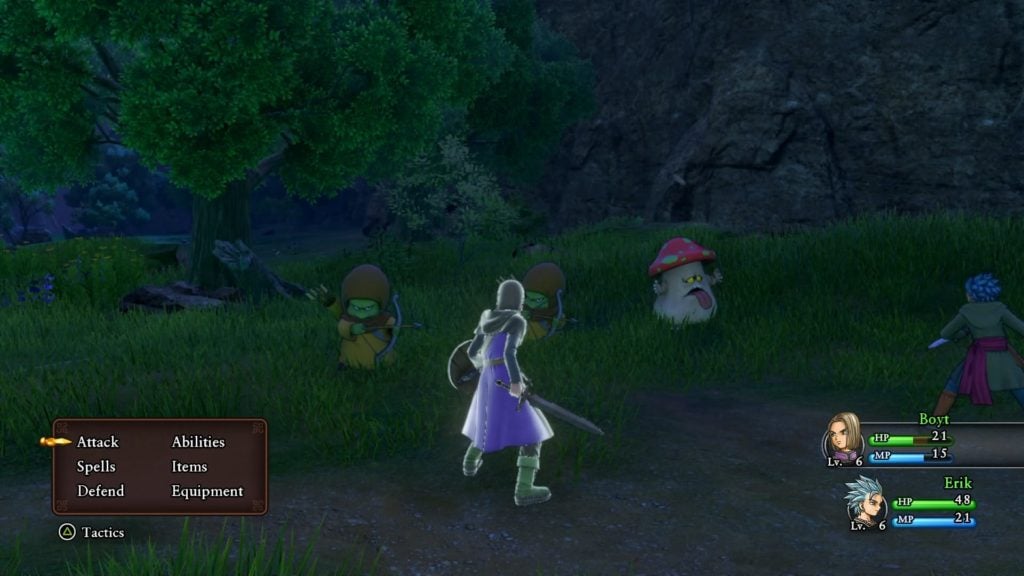 Surviving in combat comes from a mix of keeping up to date on your armor and accessories as well as wisely investing in your character’s skill trees. It’s often best to fully invest your points into one tree at a time to maximize your skills, especially since many of the cast’s best abilities are locked at the end of certain skills trees rather than being learned by leveling up. There’s no punishment for poorly investing points or finding out you don’t like the playstyle one tree gives you. You can reset your character’s skill points at any save spot for a small amount of gold, and reinvest them as needed. Gold is pretty easy to come by. The only time the party truly struggles financially is in the first few hours, but things pick up rather quickly. Equipment costs can also be offset by the game’s crafting mini-game, ‘the fun-sized forge.’ Forged items tend to have slightly better stats than most purchasable gear or can even give you access to things a few stops before you find a store that stocks them. You can also rework items in the force to increase their stats further, which is invaluable to keeping special weapons relevant after their base stats begin to fall off. 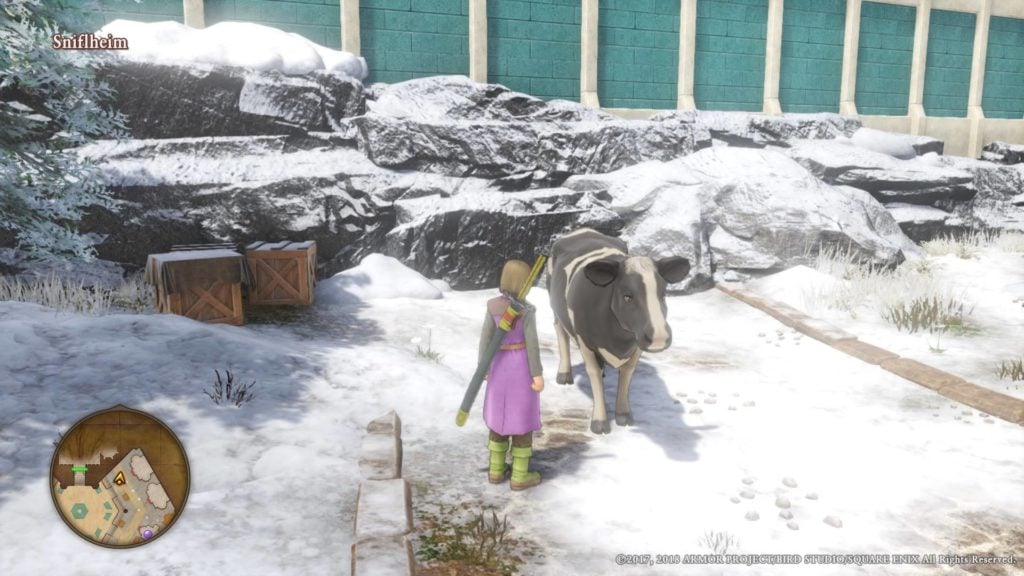 This chapter thankfully has a happy ending.

Dragon Quest XI: Echoes of an Elusive Age is a solid example of how to properly build an RPG game in modern times. It’s solid, yet simple, gameplay coupled with a creatively written world and cast show that you don’t need to continually reinvent your series with each entry to stay relevant. You don’t need overly complex plots to make characters likable. The sheer amount of things to do and places to explore in Dragon Quest XI is staggering, and the game has a level of polish to it not often seen in other big-budget titles.