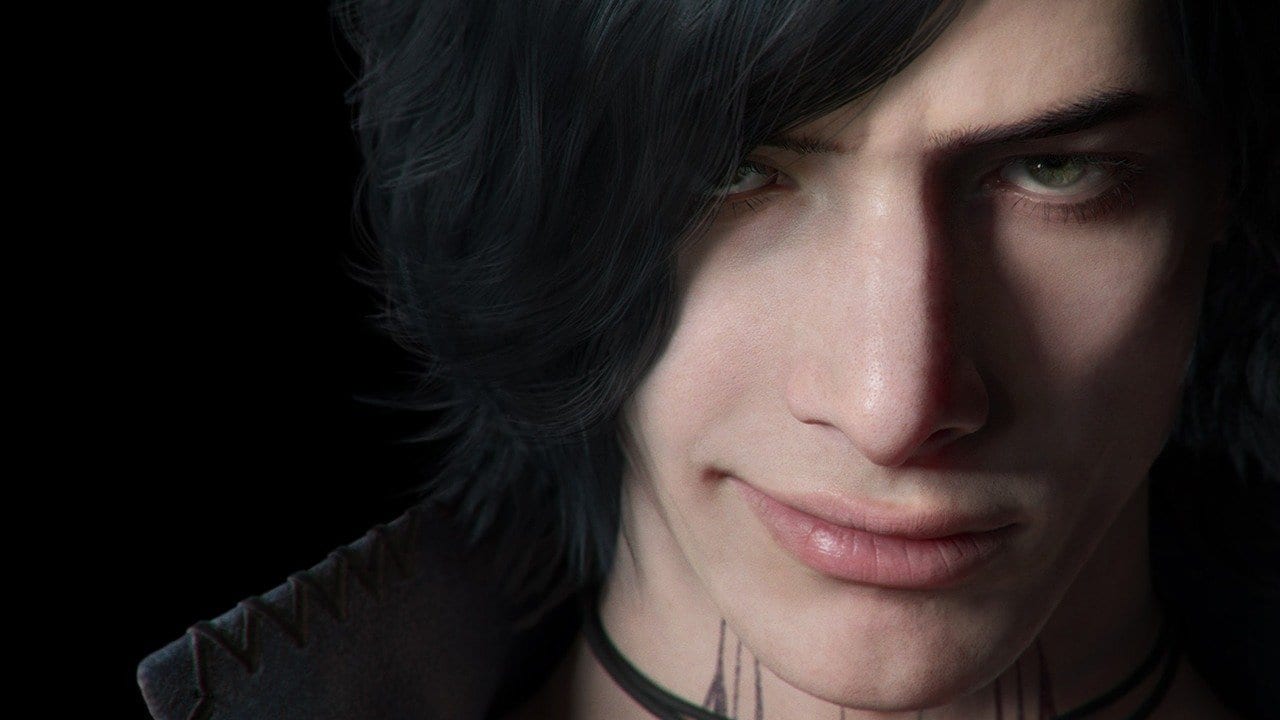 Devil May Cry and Visions of V

For the most part, Devil May Cry 5 is a game about refinement. It aims to build upon the already robust combat system and sense of style that Devil May Cry 4 had, and it succeeds greatly in doing so. But this does not mean that Devil May Cry 5 is afraid of experimenting with the established formula. Alongside returning characters Nero and Dante, the game introduces a third playable character that puts a unique spin on the series’ tried-and-true combat system. This new character, V, ends up being a surprisingly welcome addition in his own right. Although his implementation is far from perfect, his personality and the ways in which he plays with Devil May Cry’s mechanics make him an unexpected highlight of the game.

The aspect of V that initially stands out is his character. At first glance, his personality seems to have extremely limited appeal. He has a dark, brooding demeanor, completely clad in black and frequently reciting stanzas from William Blake poems. His almost cartoonishly edgy persona could have easily come across as off-putting or cringy, but it just about works. He delivers most of his lines with a degree of cheeky charisma, and although he has his fair share of serious moments, he isn’t above having fun with himself. This quirky side of him is best seen during gameplay; the midair ballerina twirls and air conducting performances that he can do when the player builds enough style points exude the kind of goofy charm the series is known for and then some. V’s character is also bolstered by one of his familiars, Griffon. Unlike V’s other familiars, Griffon is an abrasive, Iago-esque chatterbox that wisecracks every chance he gets, and this personality contrasts well with V’s dark persona. Griffon serves to keep V’s edgy tendencies in check, and it’s always fun to see both characters play off each other whenever they are onscreen together. This healthy mixture of serious and lighthearted elements make V a surprisingly entertaining character that sticks out in a cast full of bombastic personalities.

As enjoyable as he is to watch, it’s his unique gameplay style that truly makes him shine. Unlike Nero and Dante, V rarely attacks enemies directly. Instead, he uses his three familiars to do the dirty work for him, with the panther Shadow serving as the melee attacker, Griffon acting as the ranged attacker, and the hulking monstrosity Nightmare coming in when V activates his Devil Trigger mode. Shadow and Griffon’s moves are both mapped to the same buttons used for Nero and Dante’s melee and gun attacks, making them feel ergonomic and natural to use. V has little direct control over the familiars’ positioning outside of his dodge moves, but since the familiars are susceptible to getting temporarily knocked out by enemies, the player has to take advantage of what little control they have over Shadow and Griffon to get them out of harm’s way. This limitation does put V at a disadvantage compared to the other playable characters, but his familiars’ acting as entities separate from V provides a crucial advantage in that both melee and ranged attacks can be performed at the exact same time. No matter how efficiently the player can cancel moves into each other, Nero and Dante cannot use their melee and ranged weapons at once, so this unique quirk with V allows for a decent degree of multitasking and combo potential. And, of course, V can freely move around, jump, and taunt while his familiars are on the offensive, allowing the player to dodge enemy attacks while keeping enemies at bay.

Some of V’s mechanics really take advantage of this multitasking element. For instance, at any time, V can open his book and read it to slowly fill up his Devil Trigger gauge. Doing this slows him down considerably, leaving him wide open to attack, but since he can still control his familiars while doing so, the player is encouraged to find as many opportunities as possible to gain Devil Trigger in the thick of combat without interrupting their assault. In a similar vein, V can taunt to gain style points like the other characters, but his taunt animations are the longest in the game by far, so taking full advantage of them can be quite risky. But just like with the book, the player can still attack enemies with the familiars while taunting, giving the player a great deal of leeway to show off while maintaining the flow of combat. These risk-reward mechanics do an admirable job at keeping players active even when they are standing far away from the action, which goes to show how much the developers thought about making V feel fun to play no matter the situation.

Although V’s gameplay style inherently involves keeping distance from enemies, he cannot stay far away for long. His familiars cannot kill enemies on their own, but they can substantially weaken them, giving V an opportunity to move right into the crowd of enemies to finish them off. This aspect of V’s gameplay is important; by forcing him to land the killing blow, the game ensures that he is still at risk of getting damaged by enemy attacks. Devil May Cry 5 smartly balances his keep-away style by making him weaker to enemy attacks and by removing the healing property of his Devil Trigger state. As a result, although the player will generally get hurt far less often as V, each mistake is far more costly than it would be as Nero or Dante, which ensures that the tension associated with avoiding damage is preserved.

Although V cannot use Devil Trigger to heal him directly, it is nonetheless a powerful tool. As soon as V activates it, Nightmare will come bursting onto the scene and automatically attack demons using an array of devastating moves. Shadow and Griffon also become briefly invulnerable to damage, which makes Devil Trigger a fantastic option to use when the situation gets hairy. The downside to this mode is that the player has little control over what Nightmare can do, and the only way they can choose which one of his attacks to perform is by riding him directly, which is slow and somewhat cumbersome to get the hang of. This strange restriction is somewhat offset by the fact that V still maintains control over his other familiars while riding Nightmare, keeping the multitasking element of his gameplay strong. The developers may have implemented this restriction out of a concern that freely moving around on foot while controlling Shadow, Griffon, and Nightmare at the same time would be too unbalanced, which is a fair concern. But this ends up making it so that most of Nightmare’s actions are decided at random without the player’s input, which makes this restriction one of Devil May Cry 5’s more questionable design decisions.

Fleshing Out the Details

Whatever flaws V’s gameplay has do little to offset the many fun little details associated with him. As previously mentioned, V’s taunting animations are extremely expressive and fun to watch, which makes performing stylishly on enemies feel all the more rewarding. Normally, finishing off a weakened enemy plays a relatively quick animation to keep the flow of combat going, but if V kills the last enemy remaining in any given fight, he will perform a unique, extended animation that varies depending on which enemy type he does in. In certain areas, Nightmare will change the way he barges into the battlefield when V summons him, which often takes the form of him dynamically busting through a wall Kool-Aid Man style. Not only does this look cool, it also serves as a bona fide gameplay mechanic, as breaking certain walls with Nightmare will reveal alternate passageways and hidden collectibles. It’s clear that the developers had a lot of fun creating V, and it’s hard not to feel a similar level of enthusiasm whenever these details crop up.

As ludicrously fun as V is to play and watch, the ways in which he is implemented create a few problems. V’s move kit is nowhere near as fleshed out as Nero’s or especially Dante’s, and while this is understandable since Devil May Cry 5 is his debut title, his relative simplicity nonetheless sticks out like a sore thumb. V is also negatively impacted by the fact that he shares a campaign with two other characters, and the vast majority of missions can only be played with a specific character. This makes sense within the game’s story and general design, but it effectively means that V only has four dedicated missions in the entire campaign. To be fair, the player can choose to control him during two other missions and the Bloody Palace mode, but he still has far fewer opportunities to develop than the other characters do. Finally, there is the twist that V is the human half of Dante’s brother Vergil. The twist by itself is perfectly fine, but it ends up forever placing him in Vergil’s shadow, making him stand out less as his own character. This problem is only exacerbated by Vergil’s immense popularity within the Devil May Cry community, and while that popularity is justified given his history, it nonetheless deprives V of his potential. The twist also makes it difficult to bring him back and develop him further in future titles without clashing with the story. Of course, he could always be playable in a noncanonical campaign like Vergil frequently is, but given that V’s gameplay is somewhat divisive, it’s uncertain if the developers are willing to revisit him in the future.

These issues are a real shame, as V adds greatly to the Devil May Cry 5 experience. He offers what is easily the most distinct combat style the series has seen yet, and the developers put a great deal of care into making it feel fun and engaging without clashing too hard with what the series has established. It’s tempting to get caught up in the ways his gameplay could be improved to match the level of depth seen in the other characters, but it’s easy to forget all that and smile when he starts playing the air violin with his cane while his familiars create bedlam on the screen. Even if he never returns in future titles, moments like that will always make him worth remembering.