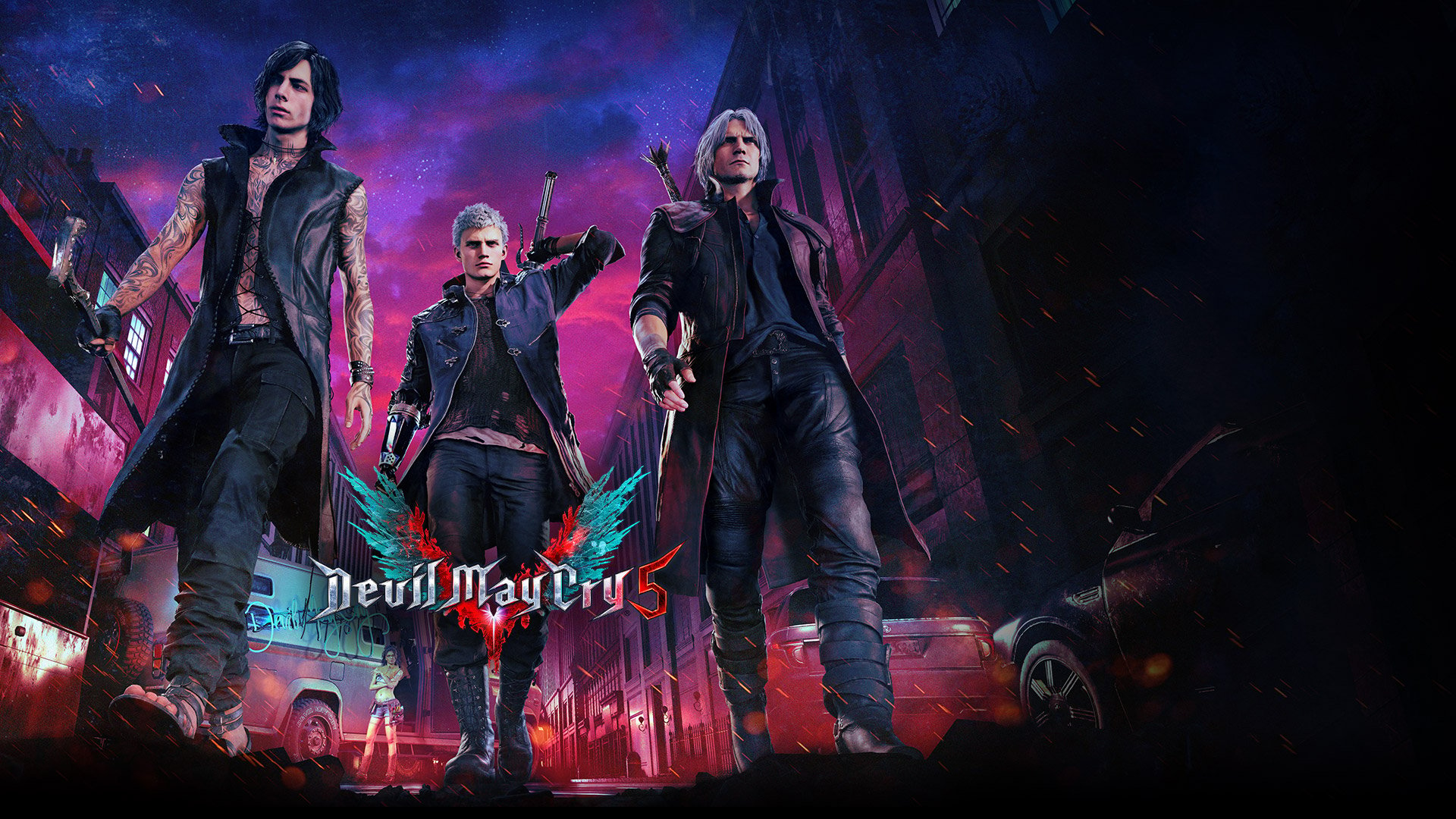 Capcom has spent the last couple of years in the rejuvenation phase. Cast your minds back to the early stages of this console generation – Mega Man 9 and 10 had effectively signalled an admission that Capcom had no idea how to develop the Blue Bomber outside of his NES formula; Resident Evil was derided as a lumbering, stale, irony-free joke after the abysmal 6th core installment; and Devil May Cry was reeling from the punches delivered to the appearance of DmC’s lead character. Welcome to 2019, where Mega Man 11, Resident Evil 2, and now, Devil May Cry 5 are spearheading Capcom’s resounding cry of IP resuscitation. Ladies and gentlemen, they’re back.

It’s hard to know where to begin with Devil May Cry 5. Traditional review structure usually leads you down a road of story, graphics, gameplay, conclusion, but going down that road with DMC 5 doesn’t set it off on the smoothest of rides, no matter how satisfying the rest of the journey may be. Devil May Cry as a series has always had a reputation for its bombastic, too-cool-for-school attitude, and the fifth installment isn’t deviating from that reputation; it’s practically gorging on it.

The game is structured with an anti-narrative set over the space of about a month (don’t worry, you’ll be told the exact date and time of every single moment of the proceedings), and revolves around series legend Dante accepting a job from an enigmatic fellow named V to kill the demon king Urizen – a massive bastard in a big chair who has taken up apocalyptic gardening by planting a giant tree in Red Grave City that is killing citizens for their blood.

Dante arrives to battle Urizen at the same time Nero does; he himself on a mission to track down the demon who ripped off his Devil Bringer arm. Surprise, it’s the same guy! The battle doesn’t last long, as Urizen lays the smack very severely down on everyone, incapacitating Dante and forcing Nero and V to flee. Thus, the beginning arc of the story follows Nero – now equipped with a robotic replacement for his Devil Bringer arm – and V in their attempt to return to Urizen’s chamber and rescue Dante.

Shut Up and Play!

Devil May Cry is frequently described as cool, but I’ve never really managed to decipher why. Sure, it’s self-aware and more camp than a row of tents, but it’s always felt more kitsch than cool; more Arnie than De Niro. DMC 5 fully embraces this, and it certainly has a lot of fun with itself. The story is full of twists and turns and quips and burns, with almost every character trying to score a SSS rating on the sarcasm-o-meter (the sarcasometer?), but it never really serves much more of a purpose than to set up the action whilst displaying as ridiculous a mix of action and puns as possible.

This is typically personified in one of three ways: characters throwing playful jabs at each other, heroes mocking giant villains with lame insults, or with some kind of visual chaos that is so over-the-top that you can’t help but laugh. Very rarely, it lands, but more often than not it’s to be taken as little more than a colorful distraction from playing the game. Nico, Nero’s robot arm-building mechanic, is especially insufferable; a buck-toothed hick with the wit of a teenager. She is on one end of the scale, while V, spouting breathy poetry through his floppy black fringe, seems to be single-handedly trying to revive the Emo scene. Dante and Nero are easily the most enjoyable of the ensemble, but I wouldn’t be inviting them round for beers any time soon. V would probably prefer a single plum floating in perfume, served in a man’s hat.

It’s a shame that most of what every character says is bollocks, because they look absolutely incredible. Devil May Cry 5 is an unbelievably good-looking game, and has some of the best character animation and face capture ever seen. The action is bathed in a gorgeous washed-out color palette tinged with vibrant neon, and augmented by an absolutely mandatory 60fps that just glides off the screen. The cut-scenes, the main action, the lip-syncing – it’s all an immense technical achievement by Capcom, and rarely ceases to amaze throughout the game’s run time.

A Touch of Character

They speak nonsense, they look great, and my word how these characters play. It’s been a very long and arduous wait for a proper core entry in the DMC franchise, but it feels almost as if the developers have been spending every day perfecting it since DMC 4. This is action gaming at its pinnacle. The original Devil May Cry revolutionized the genre and it’s hard to see it evolve to a more glorious level than is represented here. With three characters to play as, DMC 5 offers not only whiskey-smooth, breathlessly-flowing combat, but it offers it in three distinct varieties.https://abdcd736ea761b12ffb514837c5e6a4a.safeframe.googlesyndication.com/safeframe/1-0-38/html/container.html

The first of the three combat styles you’ll properly get your thumbs on is that of Nero. His aforementioned robotic Devil Breaker arms provide so many ways to build combos, destroy foes and hit that SSS rank for a combat scenario. In addition to his Red Queen sword and Blue Rose gun, Nero, with a press of the circle button, has a huge arsenal of moves at his disposal thanks to the frequency at which the game doles out new toys to play with. You start off with Overture – an arm that can shoot a blast of electricity to push enemies back – and along the way, you’ll be collecting additions that can do everything from slow down time, grab enemies in wrestling moves and even perform a Fortnite-esque rocket surf.

V is the newest member of the trifecta, and he is profoundly the most unique to control. Being the wussy modern art student-wannabe that he is, he couldn’t hurt a fly on the hurtingest day of his life if he had an electrified hurting machine. Luckily, he doesn’t need one. Instead, V has control over three demons linked to him through his tattoos (edgy, right?) in the form of Griffon, a wise-cracking bird that shoots electricity; Shadow, a big black cat who can mutate into any form to slice and dice enemies at close-range; and Nightmare, V’s Devil Trigger special move, who is basically an amorphous blob of pain and explosions.

In using the three demons (all of whom are sly references to old bosses defeated by Dante) to attack, V’s combat takes a little getting used to. The demons won’t finish enemies off themselves, and he must use his cane to land the finishing blow, which adds a really interesting dichotomy of needing to maintain distance but having to get up close to go in for the kill. Despite being fresh and interesting, V’s combat is a little hampered by being performed almost solely by familiars who may not even be on the screen at the time of their attacks – meaning you’re either hitting buttons and hoping for the right response, or you’re having to recall Griffon and Shadow to V’s side, and this can cause some combat delays. 1:1 button-press-to-attack response is so crucial in a game like this, and as such V feels the least satisfying without it.

Devil May Cry 5 is a lean, mean, action title that effortlessly does what so few games these days do…

Dante is, of course, Dante. He’s back and he’s better than ever. Capcom decided to go with a similar formula to DMC 4 and make the player wait to take control of the Son of Sparda, and my word is he is worth the wait. He feels like the greatest hits of himself… only this time he also has a motorbike that splits into two giant cleavers. He’s older, bearded, and a lot more jaded with this whole devil hunting gig, but he’s absolutely majestic to play as. With multiple weapons and styles to be switched between on the fly, his sections are unquestionably the highlight of a truly stellar campaign.

It’s not all about the characters, though, as DMC 5 boasts some absolutely brilliant enemy design and some even better bosses. They’re really frequent too, with almost every mission featuring a new enemy type and a bespoke boss at the end. As far as pacing goes, it’s pretty predictable, but then, DMC always has been. You fight through an area taking on multiple enemy waves, explore for orbs in every nook and cranny, stumble through some wonky-ish platforming and face a massive bastard at the end. It sounds formulaic, but it’s never felt this refined or fluid.

Some of the bosses can prove to be quite a challenge, too, and veterans of the series will be salivating at the chance to grab SSS rankings on Dante Must Die difficulty. Proving to do so will be relentlessly tough, but consistently exhilarating. The real beauty is that, even on normal settings, elements can be tweaked and backup items can be bought with red orbs to make sure that the game is as accessible for casuals as it is for the super hardcore without one interfering with the other. There’s a mass of depth if you want it, or just a ruddy good romp if you don’t.

It almost seems like it’s said so often that it can’t just be a dissenting voice of the minority, but it’s so great to see games like this still being made and still being great. DMC 5 is a wholly reverential iteration of a classic formula, and yet it’s both the exception to the 2019 norm and better than ever before. The perfect springtime tonic to a winter filled with epic open-world behemoths, Devil May Cry 5 is a lean, mean, action title that effortlessly does what so few games these days do – keep you constantly entertained and leave you desperate for more. Dante et al are well and truly back on top of the action game world. Over to you, Bayonetta.

‘Dawn of Man’ Review: Bones Waiting to Be Fleshed

‘The King’s Bird’ Review: A Fun Yet Turbulent Flight