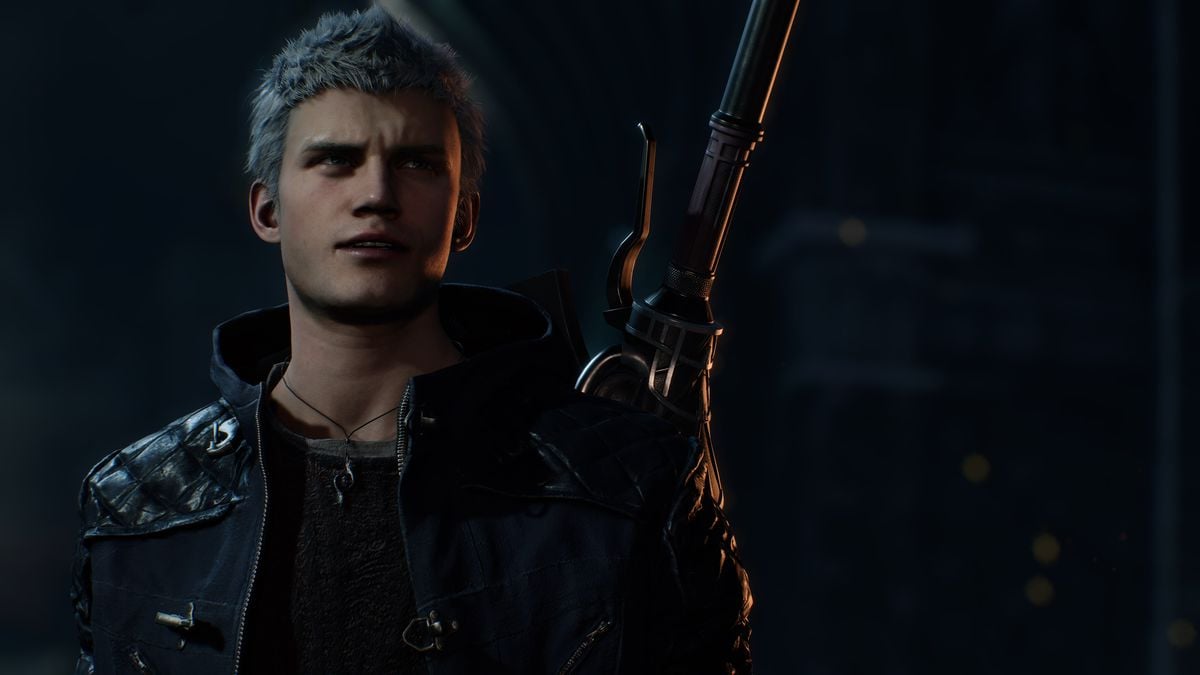 If you don’t count the spinoff/reboot DmC developed by Ninja Theory, 2019 marks eleven years since we last had a proper entry in the Devil May Cry series. That’s a long time to wait for loyal fans but thankfully Devil May Cry 5 is a return to form and more importantly, almost everything about those original games has been improved.

Developed in-house at Capcom by a team of series veterans, Devil May Cry 5 is sprawling, infectious, inventive, ambitious, and downright thrilling. The momentum never lets up from the second the prologue begins and for roughly 15 hours and exactly 20 missions, Devil May Cry 5 is electrifying. Director Hideaki Itsuno and his team have delivered quite possibly the goriest, craziest, most eye-blowing (there’s a lot of eyeballs), chunk-spewing, head-exploding installment of the series yet. Propelled by non-stop, over-the-top action, geysers of blood and fetishistic metamorphoses, DMC5 must be  seen to be believed. It’s spectacular, irresistible, unapologetically juvenile and totally fucken insane – a mesmerizing piece of art that experimentally pushes the series to daring new heights.

For a game that revolves almost entirely around frenetic action, Devil May Cry 5 features a surprisingly engaging story that weaves its fair share of twists and turns while also leaving plenty of room for meaningful character development. That’s not to say these characters are fully fleshed out, but by the time the credits roll, Devil May Cry 5 does an admirable job in at least explaining their motivations, past traumas, and their relation to one another. What starts out simple enough, eventually introduces a tangled mystery that should have most players invested, regardless of their familiarity with the series.

Set five years after the events of Devil May Cry 4, DMC 5 takes a non-linear approach in storytelling and jumps back and forth in time with events viewed from multiple vantage points. Dante and Nero are back, along with the mysterious V with the goal of destroying a demon named Urizen who has planted an enormous demonic tree that is draining the city of Red Grave of all its blood. When the assembled group fail in their attempt to stop Urizen and are forced to retreat, the demon king captures Lady and Trish, turning them into cores for the demons Artemis and Cavaliere Angelo. A month later, Nero returns to Red Grave after being outfitted with deadly prosthetic arms made specifically for him by series newcomer, Nico. Along with V, set out on a quest to stop the demon Goliath, who is seeking Qliphoth for its fruit – a fruit which gives whoever consumes it, the power to rule the Underworld.

It sounds dark and depressing but thankfully Devil May Cry 5 never takes itself too seriously, often shifting toward delicious camp and interjecting playful quips, zippy one-liners and zany interludes like Dante’s impressive Michael Jackson impersonation. It helps, the story is genuinely funny at times and supported by fine performances, impressive motion capture and an overarching tone of jaunty good fun!

Over the course of the game’s twenty chapters, the relationship among the three men becomes increasingly complicated. Sibling rivalry, daddy issues, and dark family secrets push the narrative forward and each of the three main characters is given just enough screen time; just enough flashbacks and just enough dialogue to make their motivations clear. For a game as bloody and violent as this, there are plenty of emotional beats and just enough human spirit to sell itself. And even if like me, you don’t recognize the nods to many of the series’ most iconic moments, you’ll at least walk away understanding what makes each of the three main characters tick.

What drives a story more? A strong plot or good characters?

The Devil May Cry franchise is known for its stylish fighting and so it shouldn’t come as a surprise that Devil May Cry 5 looks and feels very similar to the original series. This time around, players take control of three characters, each with their own unique and creative playstyles. Devil May Cry’s poster child Dante has four fighting styles in total (Trickster, Swordmaster, Gunslinger, and Royalguard) and can even wield a demonic motorcycle that transforms into two chainsaws creating a bloody spectacular setpiece when in battle. But while Dante may be the star of the series, he’s somewhat overshadowed by his two counterparts.

Devil May Cry 5 begins by first putting the player in the shoes of the one-armed, silver-haired demon hunter Nero who wields a giant sword, a pistol, and disposable prosthetic arms called Devil Breakers that give Nero access to an assortment of special abilities depending on which Devil Breaker he is carrying. Of the three men, Nero is arguably the most fun to control thanks to his rebellious nature and grappling hook. In contrast with Dante’s laid-back attitude, Nero leaves you caring about each character because he himself cares.

V, on the other hand, is a frail poet shrouded in mystery who commands a demonic condor with the power to control wind and lightning and a panther who can morph into a spear-like form to lunge at enemies. The latter (Shadow) attacks at close range by inflicting melee attacks, while the former (Griffon) fires projectiles from a distance. V is also accompanied by a third familiar named Nightmare, a giant black demon made entirely out of a demonic fluid who can inflict ridiculous damage for short bursts of time. At first glance, V doesn’t seem as fun to control as Nero or Dante given that he must rely on his three companions to inflict damage on his enemies, but it doesn’t take long to realize that controlling V and his three familiars adds a welcome change of pace to the combat, made all the more rewarding by having to teleport V to deliver the final blow.

Unfortunately, the three ladies in Devil May Cry 5 don’t have much to say or do, most notably Trish and Lady who make an appearance as the damsels in distress, only to be quickly captured, later saved and in one case, stripped completely nude for no reason whatsoever. Luckily, the chain-smoking gunsmith, Nico helps lighten the mood with her sense of humour as she drives around town selling our heroes weaponry. Nico may not get as much screen time as the men at the center of the story but when she does, she comes across as a headstrong, intelligent businesswoman with a positive outlook on life, no matter how many bad cards she was dealt.

Of course, every great story has a great villain and Devil May Cry 5 is no exception. One of the best things about the game is Urizen, a colossal humanoid demon who appears multiple times in the game, each time, reinventing himself. Devil May Cry 5 has plenty of other nightmarish creatures to fight as well, and there are few games out there that can match the intensity of these boss fights. A special mention must be made for the final boss (no spoilers here), who doesn’t just provide the story’s final twist but also represents the toughest challenge.

The Devil is in the Detail

Like past installments, Devil May Cry 5 focuses intensely on combat making it a nonstop visual assault, but for a game blood-drunk on its own artful excess, Devil May Cry 5 is also a character-driven game, and without these characters, I’d argue it would be just another hack-n-slash outing that leans towards monotony. It’s not just that you have three very different warriors to control. It’s not just that one of these three characters comes with three additional characters to also control. It’s not just that Dante, Nero, and V all look so incredibly stylish and each has a unique fighting style – but I’d argue that each cutscene brings with it a much-needed momentary break from the chaos unraveling onscreen. For a game in which the camera struggles to keep up with the action, these characters are the heart, soul, and center of it all. Personality goes a long way and despite some poorly written dialogue, Devil May Cry 5’s characters are a blast to watch.

A story certainly needs a plot but what makes a story even more interesting is who it’s happening to. Devil May Cry 5 will never win a Pulitzer but the developers went out of their way to create some of the most impressive cinematic cutscenes in order to spotlight their cast. And it’s in these cutscenes that the skills of the artists truly shine. The amount of detail in the character work is truly remarkable and at times, Devil May Cry 5 gives Hollywood a run for its money. The opening slow-motion credits sequence alone is worth applauding as Nero and co. move about the frame as the titles artfully blend into the environments.

Of course, it helps that Devil May Cry 5 is indeed a gorgeous game. It represents a huge leap in visual complexity for this series and is another brilliant outing for Capcom’s RE engine. They say the devil is in the details and every detail, from the motion capture performances right down to the facial expressions – to the blood-soaked apocalyptic ruins of the gloomy Gothic European city landscape to the intestinal corridors that transport our heroes deeper into the pits of Hell – is nothing short of spectacular! I especially love the cinematic lighting, the subtle shadowing, the reflections off wet surfaces and the urban graffiti covering the city’s walls.

Perhaps I’m still in that honeymoon phase, mainly because I just finished the game and mostly because Devil May Cry 5 is about as exciting as video games get, but as it stands, Devil May Cry 5 is one of the best games of the year so far, second only to Resident Evil 2 (another brilliant outing by Capcom). I’ll be curious to see what is written about this game long-term as I surely expect some pushback from longtime fans. Regardless, despite being one of the most hyped action games of the year, Devil May Cry 5 does not disappoint in the slightest even with the ridiculous amount of high expectations going in. One thing’s for sure, Capcom is back and I can’t wait to see what other surprises they have in store for fans in the near future.