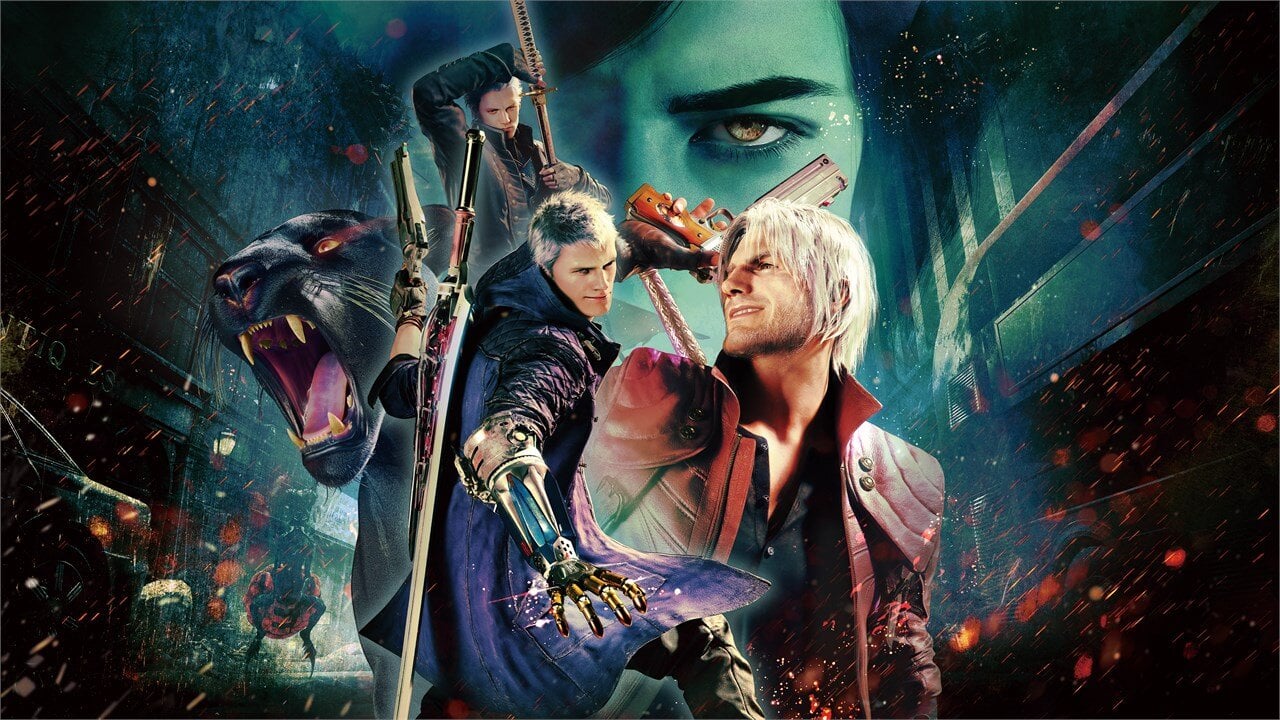 Devil May Cry 5: The Good and the Bad

There’s no such thing as a perfect video game. This is something I’ve come to notice is especially so in terms of a game’s narrative and how it coexists with, or compliments, gameplay. Very rarely have I finished a game and thought that both gameplay and story – or at the very least, the acting or cut-scenes – are on a completely level par with each other. It’s almost always a compromise with one in favor of the other – maybe not in terms of how the developer designed it, but in how myself, and often the gaming public at large, perceive the final release.

Obviously, this is a subjective perspective that cannot be generalized across the entirety of a medium, but it’s something that I feel is entirely evident in Devil May Cry 5. Those who have read my review will already know that I didn’t much care for a lot of the characters and their dialogue, even if the story was relatively serviceable, albeit a little predictable. However, I love the game and would absolutely have it as one of my candidates for game of the year; quite simply because its gameplay is outstanding.

There are numerous examples worth citing on both sides of this point, and typically it seems to fall more heavily towards story over gameplay in the West and gameplay over story in the East. Games like The Witcher 3, Mass Effect, Bioshock and Skyrim have all been lauded for their world-building and storytelling in recent years, but all had to settle for mild demerits when it came to their gameplay. Witcher 3 is too floaty, Mass Effect is too clunky, Bioshock is not a great shooter and Skyrim is too buggy and glitchy. These were, and are, the popular rhetoric surrounding those Western-developed games. Interestingly, Mass Effect 3 marked easily the most refined gameplay experience of the series, but is also criticized for having the worst story. Red Dead Redemption 2 is the latest example of a Western (both kinds) game telling an incredible story in a breath-taking world, but being wildly divisive when it comes to actually playing the game.

Of course, there are Western examples of the opposite being true, with many action-oriented titles victims of the gameplay-over-story angle. Games such as Gears of War, Halo, Call of Duty and Doom are all revered for their revolutionary gameplay achievements, but none have stories that particularly stand out or live long in the memory. It could really be argued all day long and with countless differing examples and opinions, but fundamentally this particular argument is bolstered when it comes to Japanese action titles. In particular, the ways in which they go beyond ‘having great gameplay but a passable story’ to transcend into these titles with incredible gameplay featuring stories that require a sizeable barrier of entry to be broken down.

Among the examples here are titles like Vanquish, Bayonetta, Metal Gear Solid, Resident Evil and, of course, Devil May Cry. All have excellent gameplay, but can appear – especially to outsiders of their respective series – to be overly convoluted, or simply utter madness. Resident Evil and Metal Gear Solid are two iconic Japanese video game franchises, but their stories are almost impenetrable unless you’ve followed from the start, and even that doesn’t necessarily help. Alternatively, Bayonetta and its sequel are chock full of complete and utter nonsense, and yet they are two of my favourite games ever made.

It’s this last example that rings truest to Devil May Cry 5. Its story isn’t terrible, but nearly every cut-scene in the entire game features an almost relentless mix of quips, puns, innuendo, lame insults, flashy imagery, or visual chaos. There are some moments in which the plot is required to take itself seriously (typically through the incredibly monotonous voice of new character V), but even those seem like the developers felt they needed breaking up with a one-liner or visual pun to avoid deviating from the ‘attitude’ of the game.

This is not necessarily a bad thing, and comes down to personal tastes – much as everything does. My personal tastes, despite being a huge fan of Japanese media and culture (and studying the language for almost a year) don’t often lead me to look at a story like DMC 5 and think anything other than “man, this really is trying to be wacky – I wish they’d tone it down.” It’s important to note that not all Japanese games are like this, and certainly not all Japanese media, but there is a definite subset of action game that is laden with this kooky and bizarre sense of humor. Suda 51’s games are notorious for it, and Devil May Cry is arguably the series that popularized it worldwide.

Perhaps to decry the humor in the game is missing the point (certainly the developers would argue that), but what is the point I’m missing? Does anybody on the DMC 5 writing staff genuinely think that Nico the mechanic is a laugh riot with an endless repertoire of classic gags, or is she supposed to be as groan-inducing and cringe-worthy as I found her? A label frequently tied to the DMC series is that it ‘doesn’t take itself seriously,’ and this is fine, but does that mean that the developers and writers want the jokes to be shit as opposed to nuanced and witty?

Would Devil May Cry 5 have worked as this bombastic action title full of insane imagery, blood, guns, boobs, and demons if it had a sophisticated sense of humor? Maybe the entire point of it is that you’re supposed to groan at the gags and then enjoy the carnage you get to take control of, ensuring that your mindset is always defaulted to enjoy the crazy, rather than be taken out of it. SEGA’s Yakuza series is one I absolutely adore, and every title in the series carries with it this dichotomy of narrative styles depending on what you’re doing in the game.

Yakuza 0, for example, is a game in which you can follow a gripping, emotional and brilliantly-acted crime drama, and employ an actual chicken as a real estate manager. One is among the best examples in contemporary media of how to tell a crime story, and one is absolutely fucking ridiculous, yet they never really cross over. The main stories in Yakuza games are almost always totally serious, whilst the substories and mini-games are batshit insane, and that is the entire appeal to a lot of its fans – myself included. DMC 5 doesn’t have the luxury of an open world and side quests to get its rocks off with the ha-ha stuff while the main story gets serious, so it needs to make sure the tone is either one thing or the other.

As already stated, regardless of the way in which DMC 5 portrays itself, the gameplay is just incredible. It’s fluid, it’s balanced, it’s exhilarating, it’s varied, and it’s been refined over multiple series games – many of which are equally as brilliant. Does Nico making shitty puns or V reading poetry take anything away from how the game feels when you’re slicing up demons? Absolutely not. Does it detract from the overall experience? Possibly; at least it did for me. Defining what that experience is becomes the real hard part, and that’s when it becomes a question of whether I played DMC 5: the ridiculous, self-aware rollercoaster of an action blockbuster, or whether I played DMC 5: the incredible action game with a bunch of idiot characters saying stupid things (I’m not even touching on the unlucky timing of the Michael Jackson dance scene – yeesh).

I may lean towards the latter category, but it’s in trying to understand the intention of the writers where concessions can be made, or faults can be ignored. Bayonetta 2’s Loki is one of the most insufferable little twats I’ve ever seen in a video game, and yet it’s comfortably in my top ten games of all time. I understand the tone attempted to be achieved by Bayonetta 2 and, while I find it far more annoying than funny, I can appreciate that it’s doing something that doesn’t click with me one on level, but completely blows me away on another.

Groan-inducing humor is something that isn’t exclusive to Japanese games. I’ve often found Nathan Drake to be pretty goofy, albeit in an admittedly charming way, and it can’t be easy for every developer to make a game like Portal 2 or The Stanley Parable, especially if they want their audience to wreck big-breasted demons rather than solve complex puzzles. The reason why Christmas cracker jokes are always so terrible is that they need to be on a level where every single person at that table can understand it. DMC 5 feels the same to me – the humor needs to be obvious enough that it can be seen to be having a fun time, whether I’m laughing along or not.

There’s definitely an implied negative connotation about being a jack of all trades and master of none, and that’s something I’m absolutely relieved DMC 5 avoids. I come to it for the fun gameplay and the humor can do what it wants, even if it’s bad, because I don’t need it to be a jack of all trades to enjoy it and take away my own opinion of its main selling point. In reading this, you’ve likely plucked several examples that go against everything I’ve said, and that’s what comes with subjective entertainment media, so that’s to be expected. Or maybe it really is just that there is no such thing as the perfect video game that has equally perfect gameplay and story… oh wait, I just realized it’s Chrono Trigger.

Sorry about all that.