In all of gaming there are few names more influential or more well known than Doom. It’s the game that solidified the shooter genre, was influential in the early days of the ESRB and gaming controversy, and made Windows the dominant OS for PC gaming. Despite all of this, there are only a handful games bearing the name Doom, and so people were rightly excited when Bethesda showed off Doom (formally known as Doom 4) at E3 last year. There’s been a few stumbles leading up to its release, such as the poorly received Beta and the lack of review copies to all publications which have had people on edge. Does Doom live up to the legacy of one of the most important games of all time, or is this just another pretender to the throne?

There’s nearly no plot to Doom, and that’s just the way it’s supposed to be. From the first moment it’s made very clear that you only exist in the game for one reason: kill everything in your way. You are the Doom Marine, brought into life in the wreckage of the UAC Mars research facility. The place is overrun with demon spawn and you seem to be the only thing that can overwhelm them, often through the use of lethal amounts of ammo. There are snippets of lore scattered throughout the game, and a codex you can slowly fill after encounters, but with a small handful of exceptions, this is pure run and gun gameplay and damn the idea of a story. 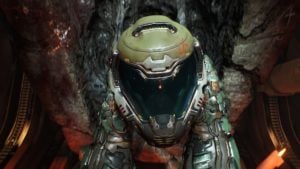 Doom feels like coming home after a long time away.

When it comes to gameplay Doom is sublime. Let’s not mince words here, this is one of the most enjoyable shooters of the last decade, and outshines even other oldschool shooter reboots like Shadow Warrior, Serious Sam 3 or id’s own Wolfenstein reboot a few years ago. The trick is its almost silly simplicity. Doom isn’t a complicated game, and that’s the best part about it. You see weapon, you get weapon, you use weapon on demon, you move forward. Objectives are kept simple so as to not get in the way and mostly just involve activating a switch, or more likely punching something to make it work.

There were concerns after the first E3 trailer that the gameplay wouldn’t be as fast as the old games, and while it’s hard to accurately compare them, there’s no doubt that Doom is miles faster than any other shooter on the market. There’s no sprint button, because you’re always sprinting. Guns don’t have reloads, save the venerable Super Shotgun, so you’re free to hold down the trigger until everything is dead. And you’re going to want to do that a lot because Doom does not mess around when it comes to offering you a challenge. The first few levels mostly serve as equipment runs, drip-feeding you new guns or abilities so the last two thirds of the game can beat you senseless with insane amounts of challenges.

Progression always follows a linear path of arena fight->hallway encounters->arena fight with the occasional collection puzzle thrown in for good measure. While the linearity of the game might be a turn off, in classic Doom fashion there’s a host of secretes littered in every level, often well hidden with secret walls, switches, or easy to miss openings. Each level also contains an unlockable Classic Level from the original games, which you can play through in HD once unlocked. On top of this some of the levels contain Challenge Runes which teleport you into a self-contained challenge for the chance to unlock powerful runes that add bonuses like more ammo from ammo drops or better jump controls. There’s also an upgrade system for both weapons and armor that sees you hunting down all the upgrade drops, giving plenty of reason to explore the massive levels.

On the technical side Doom remains a masterpiece. Graphically it hits the sweet spot between overly realistic and cartoony stylization. Demons that were scary in the original games like the Cacodemon and the Baron of Hell are downright terrifying when they’re rendered in HD, standing fifteen feet tall and bellowing a challenge at you. Lighting in particular is well done, a signature of id’s games since the 90’s, casting oppressive shadows over the level with scant illuminations from errant torches or burning wreckage. Weapons look great too, well modeled and as enjoyable to watch in action as they are to use.

A special mention needs to be made for the animations in Doom, which are absolutely amazing. There’s been much talk about the over the top Glory Kills – melee finishers that you use to brutalize enemies at low health for the reward of ammo and health drops – and rightly so, as they’re brilliant, both in their execution and the smart way they’re kept lightning fast, meaning they feed perfectly into the flow of battle. There’s little more satisfying then blasting a Barron with a rocket barrage only to follow-up by tearing off his horn and shoving it down his neck. 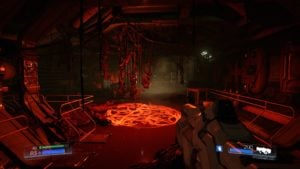 the atmosphere is oppressive, be it the mechanical halls of the UAC facility, or the depths of hell itself.

The audio work is nothing short of perfect. Weapons are destructive, with a special shout-out to the absolutely thunderous Super Shotgun. There’s an extra oomph to everything, and the weapons provide a satisfying level of kick when fired. Then there’s the music, and while there are tracks that felt out of place with an over abundance of wub-wub, when the heavy metal kicks in during a particularly nasty arena fight it’s hard not to get pumped up and it adds a lot to the experience. It might not be as classic as some of the tracks from the original game, but it does a great job of standing up on it’s own and it’s one of the better shooter soundtracks in a long time.

Unfortunately, everything truly great about Doom gets tossed out the window as soon as other players are added. Multiplayer just isn’t enjoyable enough beyond a few matches. There’s some fun moment to moment gameplay, and blowing players apart is giggle-worthy at times, but it’s just not satisfying, and can’t sustain itself for very long. There’s little reason to play it beyond trying it out, and the gaudy and pointless unlocks left a bad taste in my mouth. For what it’s worth, as far as gameplay goes it at least retains the speed of the single-player and there’s been a few tweaks made to the game since the Beta, but weapon damage is still laughably low, being restricted to only two guns is annoying, and PVP just doesn’t do anything special. Let’s break the narrative here and make this abundantly clear: whatever you do, please don’t buy the Season Pass for this game, multiplayer just isn’t worth it.

The third game-mode is the SnapMap player map creator tool, which adds some interesting longevity to the game. It’s not as great as actual mod tools would be, and don’t expect anything like the mods or .WADs from the old games, but it’s powerful enough to create interesting single and multiplayer maps while being easy enough that anyone can piece together a decent map with only a little time investment.

Doom is catharsis made video-game. It’s everything great about the original games given a brand new coat of blood-red paint. It’s an apology for Doom 3, and an apology for the modern shooter genre that some would argue has lost it’s way. It’s the shooter we always wanted from a new Doom game and the shooter Doom was always meant to be. Multiplayer might not be the greatest addition, and some may find the addition of upgrades to be an necessary modernization of their game, but it’s hard to deny the beauty of this game. Fans of the original need not fear the modern shooter, Doom is back.