In a move nobody saw coming, SEGA has finally brought the cult classic Yakuza series to PC, starting with the sixth entry in the main series, the prequel: Yakuza 0 (originally released all the way back in 2015 for PS3).

It’s pretty much a straight-up but much nicer looking port of the PS4 release, offering a good amount PC-centric options, but don’t expect anything new beyond that. Delivery to a new audience was more of the point than anything else here. So, what do we have in terms of the game?

In true Yakuza fashion, our heroes’ journeys are waded through a turmoil of mafia conspiracy, goofy melodrama, corny comedy, and a whole lot of charmingly pointless, meandering side quests.

Trust me. You wouldn’t want it any other way.

The World of “Yakuza” 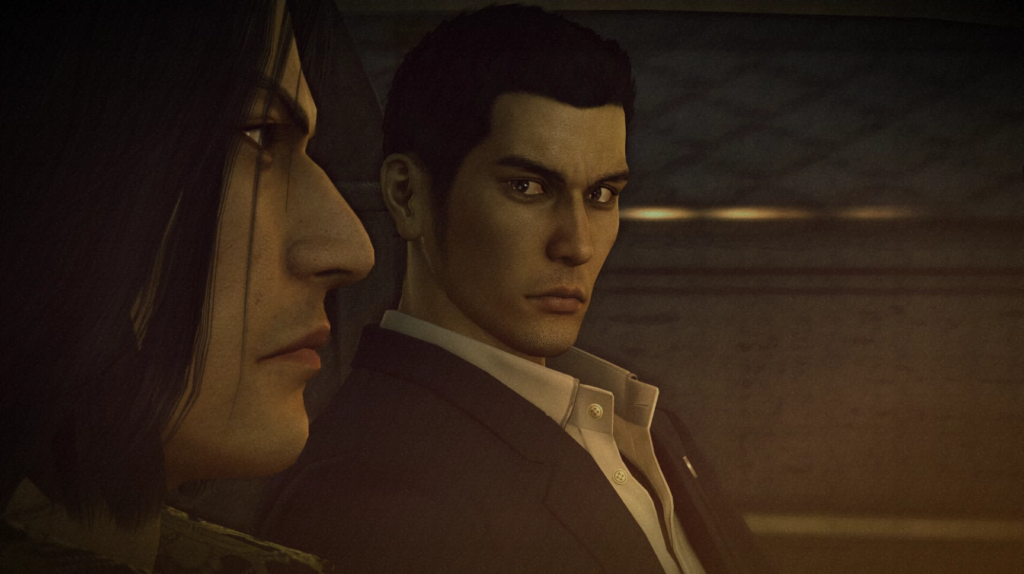 The Yakuza series is what I consider to be a relic of PlayStation 2-era game design, and I mean that in the most complimentary sense.

While a lot of 3D action games today have moved on to more open worlds, movie-like experiences, and a standardization of just how a game should look and feel, the Yazkua series has stuck to its guns since the first entry and has molded how things were done back in the day into its own specific genre.

Everything from roaming the streets (which are more like long hallways, not at all open world) to talking to NPCs and engaging in combat, it all has a very quaint bygone-era feel that is nostalgic, but also completely new; with Yakuza 0, the series has evolved into expanding the horizons of those limitations into something completely unique.

Gameplay-wise, 0 brings in a lot of improvements to the series to better cater to new players, but if you’re a hardcore fan of Yakuza, you have nothing to fear. 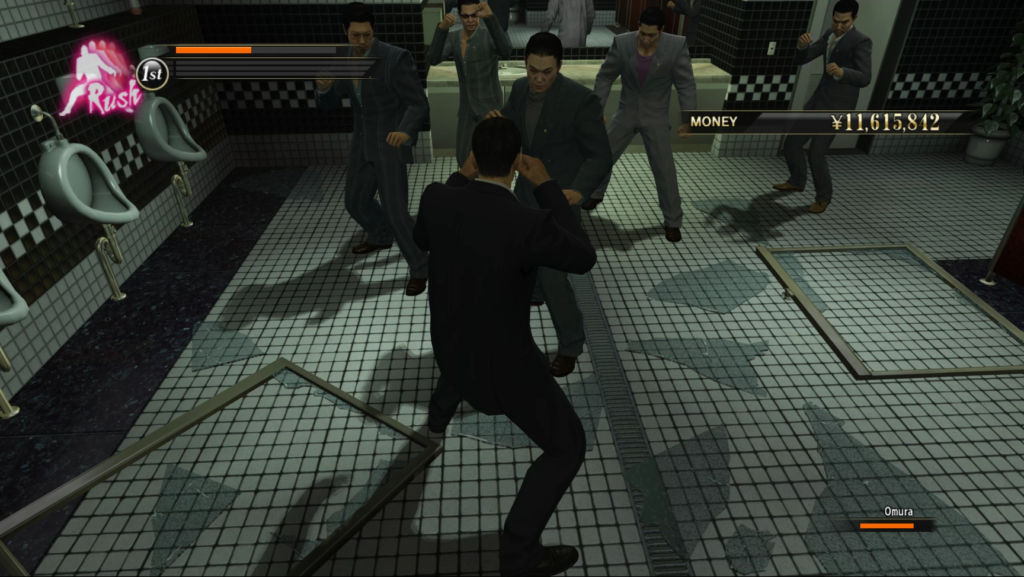 The series hasn’t taken a serious turn with this entry and even though there is an emphasis on more authentic storytelling at times, it’s not long before it devolves into cheesy karaoke music videos and after school special style lectures about the downsides to selling panties to perverted strangers (whether this kind of stuff is intentionally or unintentionally funny, and to what degree, is just as ambiguous as it has been in the other Yakuza games)

Yakuza 0 also brings back the series’ encounter-based, bare-knuckled, beat-em-up combat, complete with different fighting styles (three for each character), all with their own specific combos and movements.

The “heat” meter is back, as well, which, when full, lets loose crazy situation and environment cinematic finishers, including kicking dudes off bridges or brutally giving someone a concrete-assisted makeover.

“Heat” actions also apply to some weapons, of which there are plenty, and you can craft new ones using all sorts of material that can be found through quests or bought at a store. Or, you can just outright buy new weapons, if you can afford it. 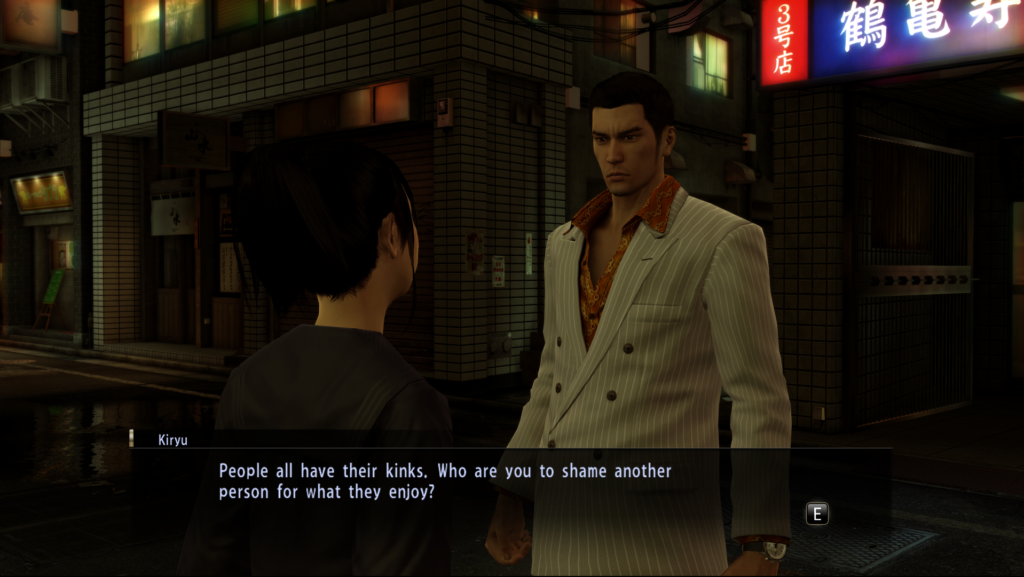 In a way, Yakuza 0’s gameplay is kind of a “greatest hits” of the series to this point.

It’s all good fun, though there is one major setback: the localization is at times criminally cringeworthy. Memes and out-of-place slang is everywhere, to the point of frustration. Not only is it often anachronistic since the game takes place in the ’80s, but the criminally unfunny dialogue sucks the life out of moments in the game that are already funny on their own.

Money Talks, and Fights, and Does Everything Else

If Yakuza 0 has a central theme to its gameplay, it’s money. A lot of it. 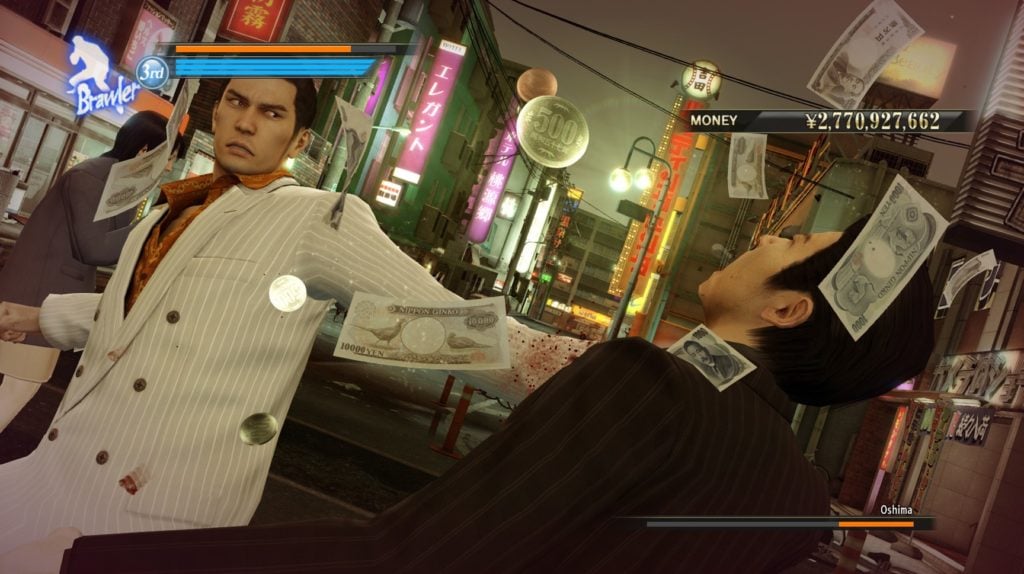 Acquiring large sums of wealth is intrinsically tied into what Kiryu and Majima are trying to accomplish within the game’s plot, but it carries over into how you’ll play the game in a pretty significant way too.

During combat, with every punch and knockdown enemies drop hundreds of thousands of yen. Different enemies will have different money drop chances; a random street hooligan might not drop a lot of cash, but a flashy gangster just might. Keep the fight interesting with varied combos, weapons, and “heat” actions, and you’ll be rewarded with bonuses that multiply your payout.

In a rush or simply not in the mood to fight? You can literally “make it rain” with cash, distracting your enemies so you can walk by leisurely.

(Side-note: I played the game on “hard”, so the as far as the difficulty of these fights go, your mileage may vary; I only died a small handful of times in my playthrough, so it’s really up to how you play) 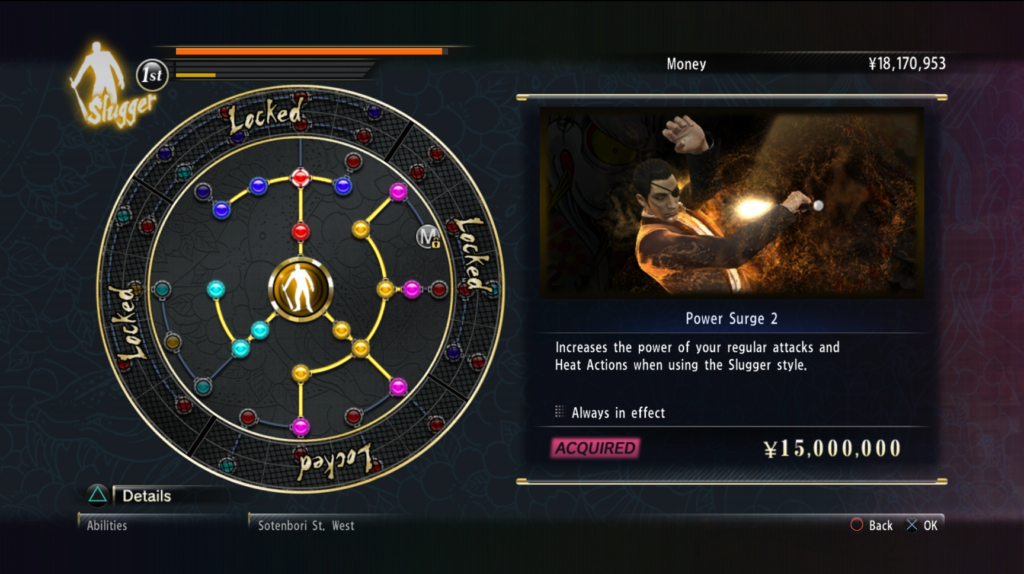 Investing in yourself. Literally. (“Yakuza 0”, SEGA)

You even use money to level up your character with new moves, abilities, more HP and so on. You literally have to invest in yourself.

But, don’t worry, there’s a lot of other ways to make money outside of beating up whoever comes your way. You can get money from a variety of mini-games, including casino games, an underground wrestling ring with scantily clad women that more’s like an elaborate rock-paper-scissor game, running a cabaret club, seizing and managing real estate, and a whole lot more.

There’s also “Mr. Shakedown” encounters: super tough enemies that roam the streets as kind of optional bosses. Defeating them nets you extremely large profits, with each clash yielding more and more cash, to a limit of 2 billion yen. But if they defeat you, they take all your cash, and they only get harder the more they’re defeated.

Money not only talks in Yakuza 0, it also does pretty much everything else.

Dragon in the West 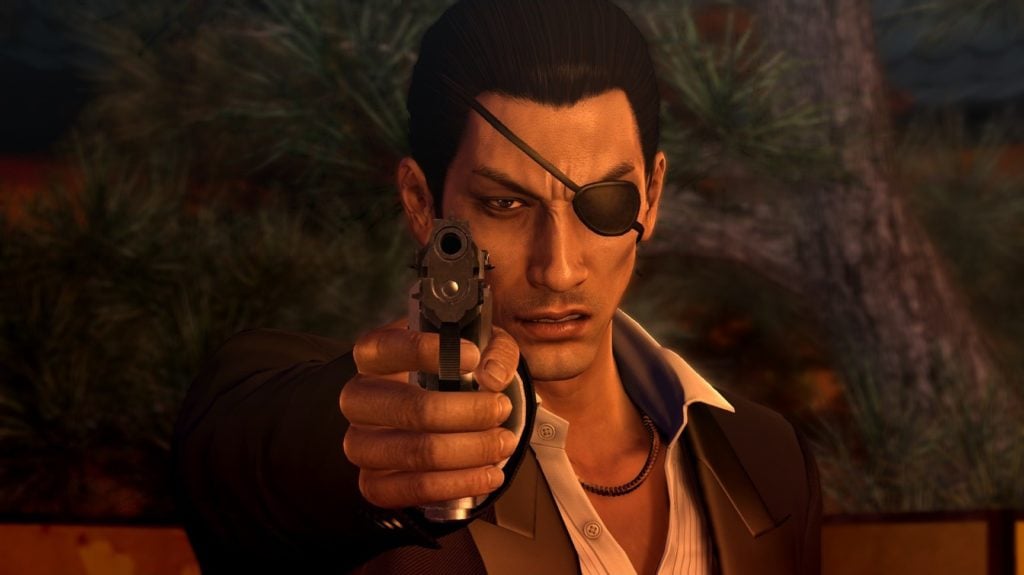 In the West, Yakuza is often described as Japan’s take on the Grand Theft Auto series, but If GTA’s rowdy antics are akin to shotgunning a beer, the Yakuza series is more like relaxing with an Old Fashioned…while assembling a macaroni craft project.

And Yakuza 0 embodies that duality in a way that’s pretty accessible to newcomers, making it a perfect debut for the PC gaming market.

Yakuza is the kind of series where you can start with any game as the entry point, but 0 makes an effort to be pretty damn accessible to someone who hasn’t played the franchise before. Outside of the story mode, a challenge-based “Climax Battles” mode is available, alongside local and online mini-game modes, where you can play mahjong and poker to your heart’s content. So, there’s a lot on offer here.

The series that was for a little while completely dead outside of Japan has finally found its niche, and it’s simply delightful to see its open-armed acceptance in the West, and to see it explode onto the PC gaming scene. With Yakuza Kiwami coming to PC later this year (maybe), and Yakuza 6 possibly slated for an early-2019 release, there’s never been a better time to be a Yakuza fan.

UPDATE: “Climax Battles” was mistakenly referred to as “Climax Mode”. This has been fixed.