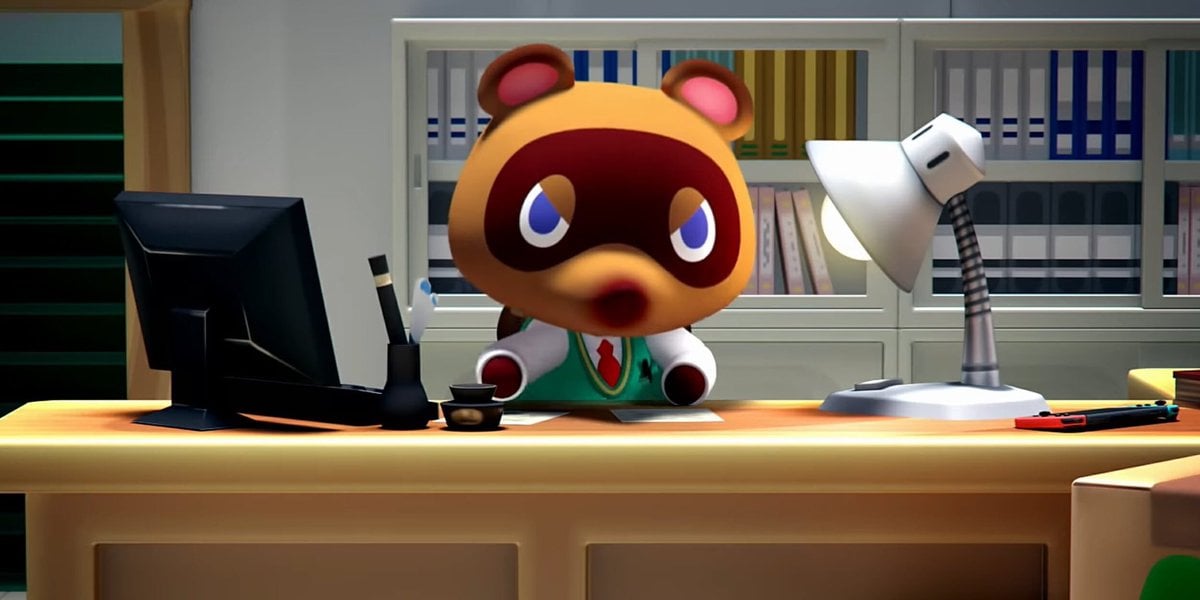 So we are all voluntarily back in debt again are we not? For what is going to be the fifth time in two decades for many of us now, the Japanese raccoon dog himself, Tom Nook, is about to shove another large debt onto our backs. The Animal Crossing business tycoon is already garnering a bad rap as he offers us a trip to a tropical type of paradise this time around in New Horizons– and that comes with no surprise. Pushing us to constantly upgrade our homes? Large debts that no entering villager can possibly pay-off so soon? Keeping innovative world-changing energy trade secrets from the public according to Nintendo’s latest official comic NookTails?

Yeah, Tom Nook definitely has some rough patches to deal with when it comes to some of his stakeholders, but is he truly the greedy businessman that so many people make him out to be? From small neighborhood village shop owner to corporate entrepreneur, Nook’s long-term philosophies actually come off as rather altruistic when taking into consideration his extensive lore hidden deep in the Animal Crossing series. From a real-world perspective, he might just also be one of the most generous landlords the world has ever witnessed. While several entertainment outlets may spotlight him as the next Ganondorf, Tom Nook secretly hides his true good-natured purpose throughout the series- but only the most hardcore fans will find the truth. A little history lesson and a shift in perspective from a veteran of this franchise may just sway your position on the animal village’s most hated individual.

Let’s start at the surface. So you step off a train, taxi, or most recently a plane and who is the first supposed friendly face you encounter in your new town of anthropomorphic animals that are hoping to help you settle in? Tom Nook. He is always the only Animal Crossing mainstay that helps you ground your own steady way of life in your new area of residence- and I really mean the only one. The second you step off the entrance lot of the game’s locked location Nook is prepared to get you settled into a new small cozy home that can be expanded upon in the future by his personal company. On top of that, he is willing to give you- a person he has never even met before or has little to no knowledge about- a part-time job, a leadership role, and useful advice. There is no real flat-out payments required for the home now being deemed under your name- in fact, the loan Nook gives you never even has to be completely paid off and has no exponential interest. Finding a real entrepreneur that is so eager to see the underdog with nothing to offer but the clothes of their back grow is hard to come across these days- probably next to impossible.

You are not the only one being given a job too by all means. Tom Nook may be mesmerized by bells, but perhaps that greedy mindset is actually for a common goal among his friends and frienemies. His support of his fellow business owners through the ideology of expansionism is actually rather admirable. From his own two kids to his ex-lover, Nook is always pulling new faces into the Animal Crossing economy through a cycle of beneficial rewards for everyone. As seen in nearly every entry of the franchise, as business booms thanks to the player’s actions, Nook’s Cranny is able to expand into a superstore. Alongside his shop, other store owners are able to expand and open their businesses both within and outside of Nook’s empire. Harriet’s Shampoodle, Leif’s Gardening Store, and Kick’s shoe popup that might be egotistically named after himself Kicks all have Tom Nook to thank for their constant persistence in the market. Even the highest class members like Gracie are able to open GracieGrace thanks to him. Nook may benefit from helping his colleagues, but they certainly reap more rewards than him.

According to the official Animal Crossing mythology that has slowly been solidified through each entry, Tom Nook has had a rather melancholy teenage and adult life. A string of bad business decisions and a relationship that may have fallen sideways led from him being part of a “house one could never imagine” to a dusty old shack near a trainyard. According to the Sable Sisters and Nook’s commentary throughout Animal Crossing: Wild World for the Nintendo DS, the Tanuki was born into a wealthy household and had a healthy relationship with his neighboring hedgehog family- possibly even a real love relationship with the tailor Sable.

Nook decided in his teenage years that he was going to pursue the big city and corporate empires in favor of the small-town neighborhood. Out of pure aspirations, Nook packed up his bags and left everything he had behind, while the Able sisters fell into a dark period of time where no one seemingly helped them when both their parents had suddenly passed. While the Able family continually struggled, a fox with a get rich quick scheme partnered up with Nook during his city days, but the latter ultimately was betrayed and humiliated by his former colleague. Nook returned home depressed, tail down, and ready to give up. Later he would further destroy his long-time relationship with his love Sable who was seeking to help him. Nook’s past presents a clear indication as to why he is always searching to help the newest arrivals in town. The hardened dreamer is just trying to make sure that the new resident with so little to offer never falls into the same spiral of accidents he once pursued. Animal Crossing has a known history of portraying our characters as big dreamers, so perhaps Nook just sees a little bit of him in all of us.

Let’s talk about the one final obvious elephant in the room. Not the villager Opal, but the bells Nook is constantly collecting from the player over time. Do you ever wonder though where Tom Nook is dumping all of these bells he has been raking in? Rather than going full-on Scrooge McDuck money pool diving, you might be quite surprised as to where the man is storing- or should I appropriately say quickly dumping all of our bells. Animal Crossing: Happy Home Designer for the Nintendo 3DS actually provides us with the exact answer from Nook himself. According to the Tanuki, he donates ninety percent of his personal income to a nearby orphanage. To go a step farther, he proclaims happily to the player that the orphanage has a dedicated wing named after him due to his deep generosity to their establishment. How could we ever deem someone as evil for enacting such kindness?

Is Tom Nook the terrible dictator money-grubber many portray him as? According to the official lore, he really is not the public menace many will continue to complain about constantly. If you want to point fingers at Animal Crossing lifestyle threats than you may want to take a look at that cold-hearted fox mentioned previously. Redd should really be the one under questioning here; the devilish fox inferred to be the one that ruined Nook’s career. He is a con artist that is well known for selling artistic forgeries and manipulating market prices in an attempt to sell fake work only recognizable by owls for extreme prices. Or perhaps tackling the topic of the insurance selling fraud that is Lyle the otter who is now part of the Happy Home Academy is more concerning…

Animal Crossing: New Horizons is available now exclusively on Nintendo Switch and we highly recommend you pick it up!