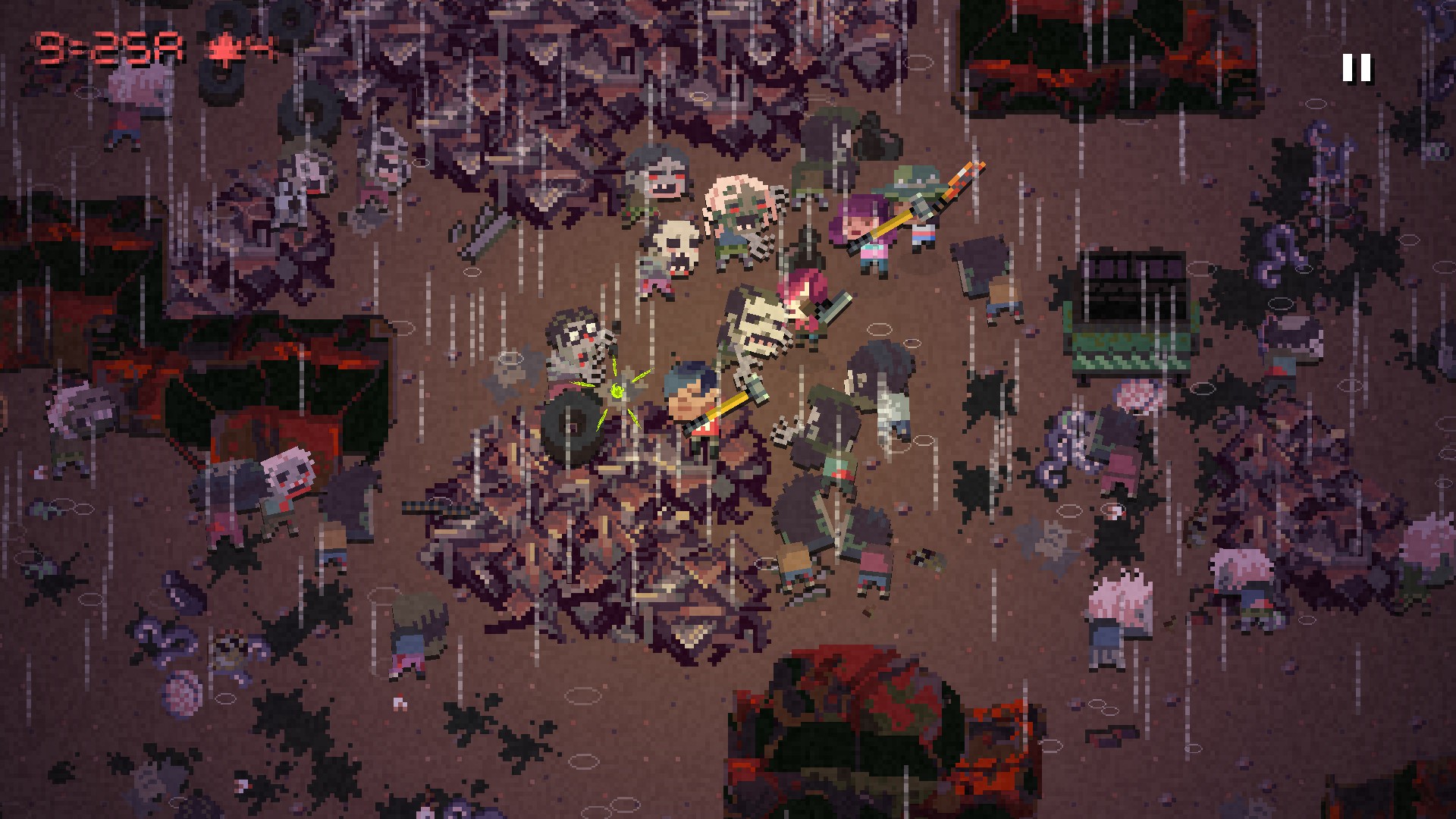 If nothing else, Death Road to Canada presents the first time in gaming that Canada has had star billing. The True North Strong and Free is so sparsely seen in gaming that it’s actually something of a treat to see my home country on display, and not only that, but as the goal of a game. In the zombie apocalypse, is this a road trip worth taking, or just a waste of gas?

The goal should be somewhat obvious from the title. It’s the end times, the apocalypse, and you’ve found yourself stuck in Florida. You’ve heard through rumours and murmurings that Canada has survived this nightmare, so you pack up your car, grab your best friend, some weapons and supplies, and head off north making whatever necessary stops along the way. The plot then plays out as a series of mostly disconnected events that affect your trip, like supply raids, bandit encounters, or the occasional stop at a trading post.

In many ways Death Road feels similar Organ Trail, a zombie-themed re-make of the classic Oregon Trail game from the 80s. Much of the gameplay is in a similar vein, including the road-trip theme. The biggest difference is the player’s direct input in most of the encounters. Supply raids actually require players to get out of the car and raid for supplies, fighting through hordes of zombies and scouring locations all the while hoping they don’t get boxed in and eaten. It adds an extra level of depth not only to the gameplay but also the storytelling, as you feel each death personally, watching the horde devour you or your friends while you swing your weapon impotently, hoping to clear some room. 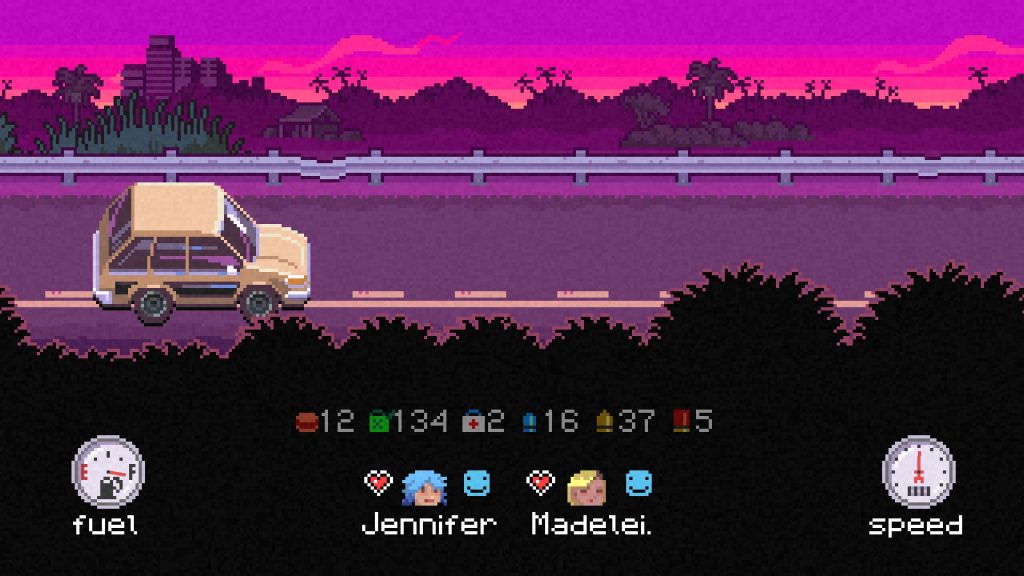 Cruising along presents some of the game’s best moments, and a welcome reprieve from zombie slaughter

Unfortunately, you’ll be swinging impotently a lot. Despite an isometric camera perspective, the game lacks any sort of proper aiming control. In fact, when using a controller, the right thumbstick is never used at all; a shame since the game really should have gone for a traditional twin-stick approach. Aiming melee strikes often feels awkward, and you’ll find that more often than not, you don’t connect as solidly as you should. Worse is when this wastes stamina without any return, your character growing weary from swinging at nothing.

This issue is further compounded by the game’s randomised difficulty spikes. As is the case with many Roguelikes, inconsistent challenge is a problem. A successful play-through requires equal measures of luck and skill, hoping the game decides to give you the necessary resources. It sometimes seems like the game punishes you too harshly for things you have little control over, like how often something falls out of your backpack or or bandits attack your group when you’re without a car. Obviously the idea is that you don’t want to lose your car, but that all depends on the game deciding to spawn gas cans for you to loot, which it may not always do.

Then there are the occasional horde moments where you’re trapped in a location with an endless stream of zombies, or forced to run through maze-like sewers while the undead pop up all around. These aren’t nearly as fun as you would think, and often this is where a run can go sour with very little warning. They add a new level of tension to the experience, but it seems manufactured, and losing everything to a siege two days into the trip can really ruin the experience. Never mind the nearly endless battle you’ll need to suffer through to actually enter Canada. 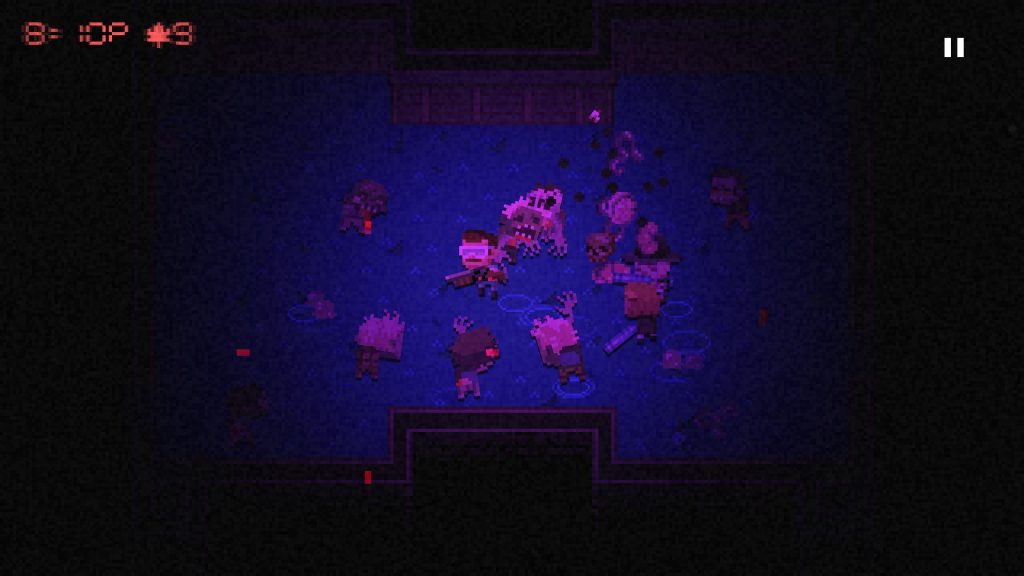 Sewer levels are a low point, and more annoying than enjoyable.

You’ll need to manage your resources, as well as the psyche of people in your group. Each person you add will have their own personality, as well as skills both obvious and hidden you’ll need to discover. While there is character interaction, it rarely amounts to anything more than meaningless chatter to showcase the game’s sense of humour. There’s little emphasis on realism, and pretty soon you’ll be encountering talking dogs and mystical forces in your journey North. Still, the random encounters that don’t require killing zombies present some of the best writing in the game, and a few special moments are downright weird. These rare encounters are memorable, and really help as you write your own story.

Visually the game is mostly standard “retro” pixel graphics, trying its hardest to look like a long-lost Sega Genesis game. As far as that goes they nailed the look pretty dead-on, sticking to a mostly authentic 16-bit colour scheme. Characters are easy to pick out, as are the items you’ll be looting. If there is one problem with the visuals it’s that occasionally lootable containers don’t stick out as much as they should, a small issue remedied mostly by the button prompt that appears when you’re next to them. The game becomes downright spooky at night as the screen switches to an ominous red overlay and reduces visibility to next to nothing.

Then there are the zombies, and as promised the game generates a lot of them on-screen at once. The aforementioned siege moments pit you against a seemingly endless stream of zombies and it’s something to behold. There’s just enough visual variety to the zombies to keep them interesting, although the real treat is how they explode in a spray of organs and viscera with a successful kill. Clearing a location completely will reward you with an ocean of black blood and gore, to go along with the feeling of accomplishment. 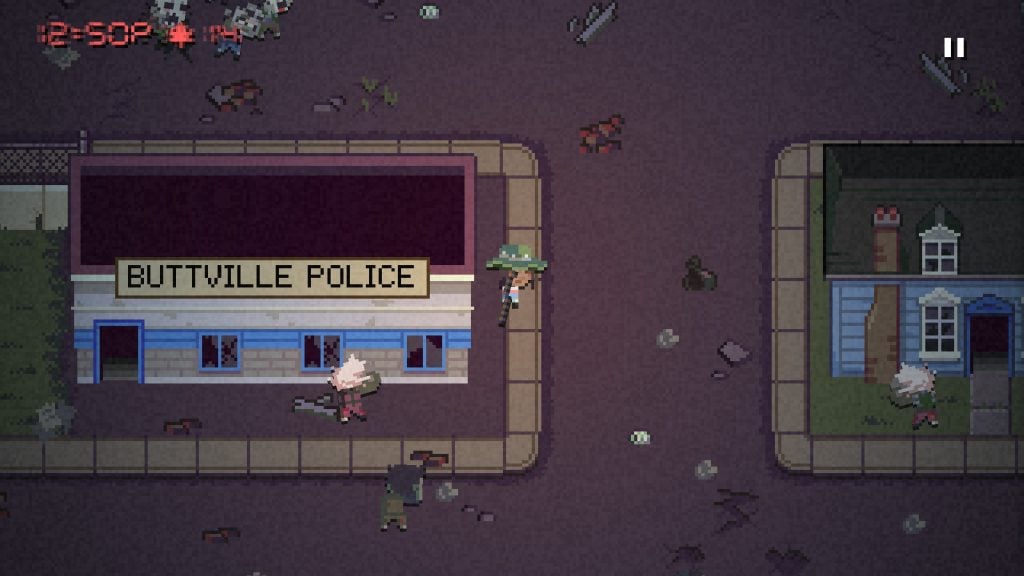 Calm moments let you take in the scenery, and the game’s sense of humour.

On the audio side the game retains its retro feel pretty well. Music consist of awesome chiptunes that go perfectly with slaughtering the undead. There’s a good mix of upbeat funky tunes and chill vibes that never seem to feel repetitive, even after hours of listening. Sound effects are somewhat minimal, and mostly constrained to zombie grunts or the chunky 16-bit sounds of you smashing your foes. It helps sell the feeling of a classic old-school game pretty well, and reminds me of a time when every sound effect sounded like a small explosion.

If the goal of Death Road was simply to provide a road trip with zombies, then it accomplished that task perfectly. While never quite reaching the level of depth found in Organ Trail, or reaching the zombie-killing zen of games like Dead Rising or Left for Dead, Death Road finds itself in a mostly comfortable middle ground. Still, for fans of the genre it’s a great little romp that provides plenty of reason to keep trying over and over, if only to see how the journey changes each time. This is one road trip that’s worth the time.