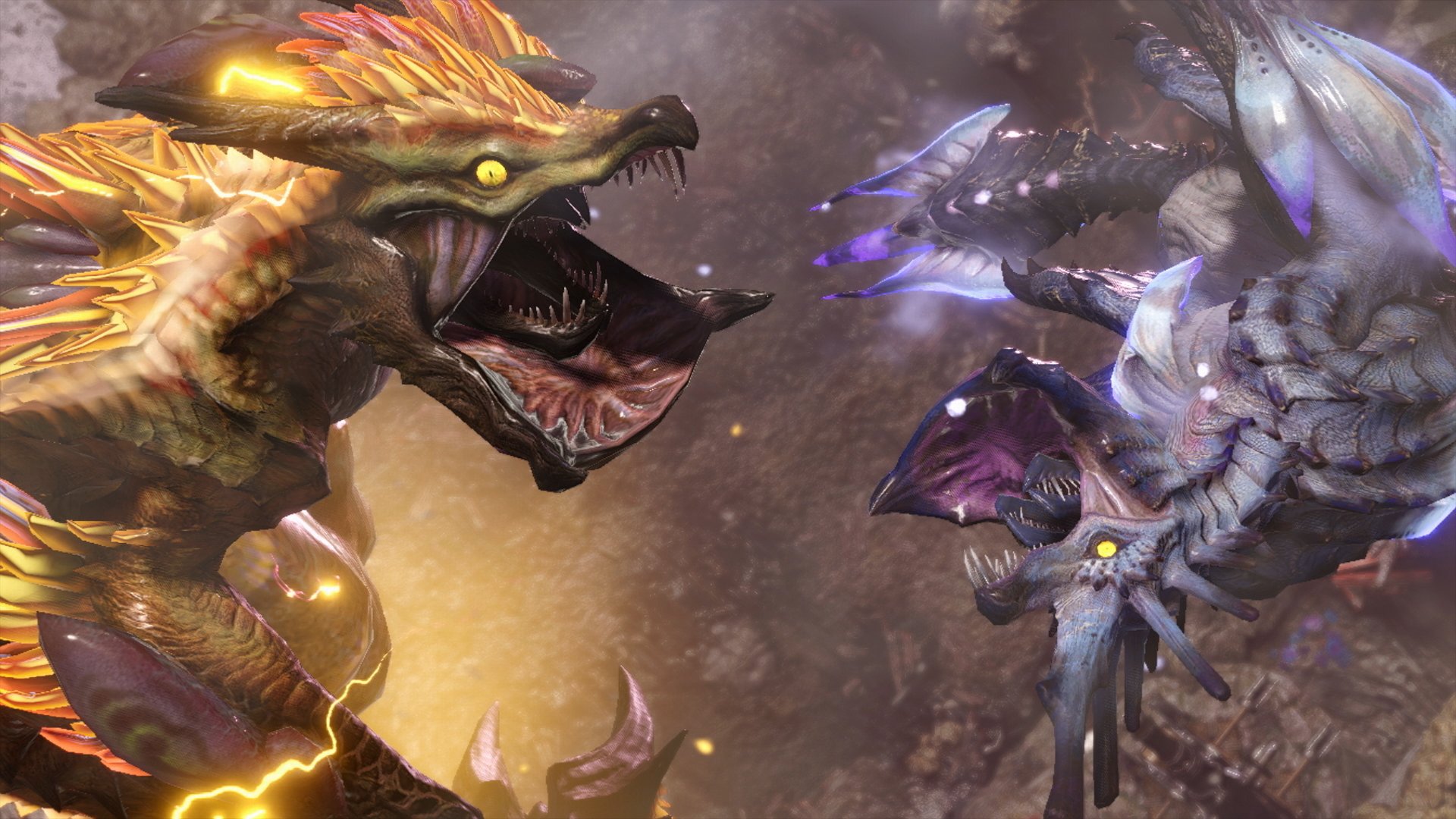 On May 26, 2021, the much-anticipated 3.0 title update of Monster Hunter Rise was finally released. Up until this point, the game infamously ended on a cliffhanger, leaving many unsatisfied despite the overall positive reception of what was then the final quest. Now that the 3.0 update is here, players can experience the true conclusion to Ibushi and Narwa’s story arc for themselves and save Kamura Village from its plight. Despite its best efforts, the new ending cannot entirely make up for the disappointment that inherently arises due to being sanctioned off from the original release. That being said, it succeeds where it matters most, and it serves as an overall worthy conclusion to the game in spite of its faults.

Unfortunately, the ending kicks off on a somewhat sour note, as players who boot up Monster Hunter Rise after the update downloads will immediately be notified that the final quest is now available if they had beaten the Narwa quest and reached Hunter Rank 50 beforehand. On one hand, it is fair to assume that players who reach Hunter Rank 50 should be appropriately rewarded by gaining access to the final boss immediately, as this process takes a lengthy amount of time on its own. On the other hand, it is strange that the final quest has such little buildup from a narrative point of view. The buildup to the Narwa battle in the base game is fairly extensive; as players complete the Hub Quests, they are made aware of Ibushi’s presence, and every major story event that occurs from this point onwards serves to either hint at or prepare players for their inevitable encounter with the Thunder Serpent. Apart from the base game’s ending cutscene, Monster Hunter Rise does little to psych players up for the newly-released ending — it essentially comes out of nowhere. Even an additional plot-critical Rampage Quest would have gone some way toward mitigating this issue.

If anything, this approach demonstrates how relegating the ending to a free update only detracts from the game. When players purchase any given title, they usually expect it to offer a cohesive, satisfying experience from beginning to end. Content updates and DLC may come later to enrich that experience further, but adding a conclusive finale to the base product generally ensures that the game feels complete right from the get-go. By requiring players to wait for a content update before accessing the ending, Monster Hunter Rise pulls them right out of the game world, and it risks leaving many of those players deflated or disinterested in the game even while knowing that the story will be completed soon. Granted, the game could have handled this much worse; another Capcom title, Asura’s Wrath, infamously required players to fork over $6.99 USD if they wanted to experience the last few episodes. In addition, it is fair to assume that Capcom did not have the true ending ready by the time Monster Hunter Rise shipped, so spending a few more months to polish it up is warranted. But it would have benefitted the game more if Capcom had chosen to delay its release until the ending was completely finished. That way, the title would not have disappointed players with its inconclusive ending at launch.

A Proper Bout With the Wind Serpent

Although the buildup to Monster Hunter Rise’s final quest leaves much to be desired, the quest itself opens with a great deal of promise. Players return to the Coral Palace, the location where Narwa was fought last time, and the game shows the two dragons flying together in dramatic fashion, with a thunderstorm raging in the background and the narrators revealing the serpents’ inner thoughts. Once players warp to the Coral Palace arena, they are immediately greeted by Ibushi, who was previously only encountered through Rampage Quests. Now players finally get an opportunity to take on Ibushi proper without any distractions, and the encounter is about as engaging as one would hope. The unique wind mechanics are so much easier to appreciate now that players do not have the threat of a destroyed gate looming over their heads anymore, and Ibushi even gains Narwa’s ability to spawn rock platforms from the ground, allowing players to really flex their Wirebug skills. Using hunting installations to shoot down the rocks that he summons feels just as gratifying as it did during his Rampage Quests, and just like with the Apex monsters, it is remarkable how well the developers adapted his moveset to fit in with the standard hunting formula.

Unfortunately, the thrill of fighting Ibushi in a traditional hunting quest is short-lived. Ibushi’s fight only lasts a handful of minutes, after which he crashes through the Coral Palace’s floor and transitions players into a new underground area, where Narwa awaits. The Thunder Serpent then absorbs the last of Ibushi’s power, killing him in the process. The fact that Ibushi finally gets his own hunt only to be upstaged by Narwa yet again almost feels like a joke, and to add insult to injury, Narwa adopts Ibushi’s wind mechanics from this point onward, making Ibushi come off as redundant. Even though the two dragons look extremely similar to each other aside from their color schemes, it is evident that a lot of work and passion went into designing Ibushi, so it is unfortunate that he ends up being so underutilized.

A Rematch to Remember

This issue ultimately does not hurt Monster Hunter Rise’s finale by much, however, as the rematch with Narwa, who is now referred to as Narwa the Allmother, is executed almost perfectly. Narwa gains access to a whole host of new attacks as well as variations on her old moves, keeping players on their toes at all times. Rings, orbs, and lightning columns come out in more complex and challenging formations, and she uses her lighting powers in conjunction with Ibushi’s wind abilities for some incredibly unique, multilayered attack patterns. In a game that is generally considered to be easier than past entries, Narwa is a genuinely demanding test of skill, as the complexity of her moves combined with their frequency and sheer lethality severely punishes players who do not stay on top of their pattern recognition and dodging skills. It is likely that many players will fail the quest their first time through, not because the battle is unfair, but because it tests their knowledge on the mechanics to a greater extent than practically any major quest before it.

The fight really starts to shine around halfway through, when Magnamalo, Monster Hunter Rise’s flagship monster, arrives on the scene. As mechanically comprehensive as the previous Narwa fight was, it did not test players on the Wyvern Riding mechanic, one of Rise’s major new features. Taking control of monsters to wreak havoc is one of the most fun parts of any hunt, so some may have seen the feature’s absence during the base game’s final battle as a minor disappointment. As soon as Magnamalo jumps into the battlefield, it is hard not to smile at the realization of what the game is about to do. At this point, what was once one of Kamura Village’s biggest threats becomes an unexpected ally, as players are given an opportunity to whale on Narwa using Magnamalo’s exceptionally powerful strikes. Not only does this moment give the Wyvern Riding mechanic one last time to shine, but it also grants players a brief, yet a much-needed burst of catharsis in the middle of an intense battle. It also succeeds in leading players into a false sense of security; Magnamalo’s appearance gives the impression that the tide of the battle is turning, but Narwa only becomes more aggressive from this point onwards, forcing players to be even more alert than they were before.

The soundtrack marks yet another point in the fight’s favor. During the first half, a dramatic, tense rendition of both Ibushi and Narwa’s themes plays in the background, reflecting the dire situation that players are having to deal with. Once players have finished riding Magnamalo, however, the track is replaced by a bombastic, triumphant version of Proof of a Hero, the Monster Hunter series’ main theme. This exceptionally heroic track serves as an excellent reminder that victory is well within players’ grasp, even as Narwa bombards them with everything she has. It is a wonderful touch that adds a great deal of energy and emotion to the fight, and it really helps to keep players motivated throughout the battle’s final stretch.

The actual ending cutscene plays out exactly like how one would expect, with everyone in Kamura Village commending the player character for its accomplishment. Considering that Monster Hunter has usually never focused on its story, this ending is perfectly acceptable. It is bizarre how abruptly the cutscene ends, however, as players are immediately taken back to the Gathering Hub without any display of credits. As arbitrary as this may sound, endgame credits can be incredibly valuable, as they are perfect for giving players time to reflect on the journey they just had. To be fair, the developers may have felt that using the credits here would feel redundant since they already appear after the Magnamalo Village Quest. But the fact that players are immediately thrust back into the game as soon as the ending cutscene finishes makes it come across as weirdly hollow, even though it largely succeeds in what it tries to accomplish.

In the end, though, it is fair to say that Monster Hunter Rise now has a conclusive, reasonably satisfying finale for players to enjoy. Even though the ending really would have benefitted from being part of the base game, this sentiment will ultimately not mean much to players who pick up the game later down the line, especially since the ending is completely free of charge. Its execution may have been somewhat clumsy in a few areas, but it more than succeeds in offering players an immensely enjoyable, rewarding monster to hunt. And in a series all about hunting monsters, that really is all one can ask for.