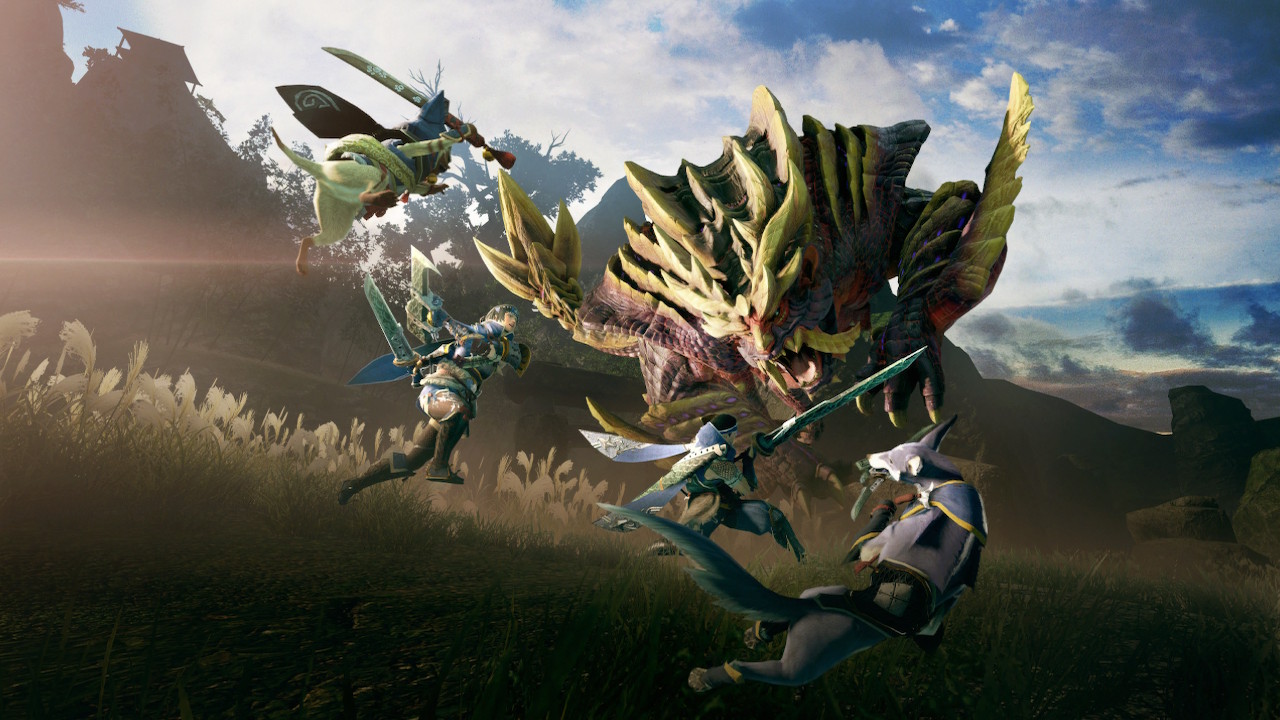 In 2018 Capcom launched one of the most successful titles of the last generation in the form of Monster Hunter: World. Its larger-than-life beasties combined with a more approachable design philosophy propelled the once niche franchise into the mainstream consciousness. Like the crafty hunters it prominently features, though, Monster Hunter has never been a series that rests on its laurels and Capcom proves this with Monster Hunter Rise. A combat system that’s more fluid than ever before, a sense of exploration absent from any previous entry, and new monsters bursting with creativity demonstrate how Rise is not letting the lesser hardware of the Switch hold it back.

You enter the game as a hunter of Kamura Village, a cozy settlement with a heavy Japanese ninja aesthetic that would not look out of place in a corny samurai flick. Unlike the ramshackle outpost of Astera in World, Kamura Village feels appropriately established and lived in lending some weight to the threat it faces. The village is under siege by a phenomenon called “The Rampage” that causes many of the nearby monsters to go berserk and, well, rampage. After customizing your hunter and companions’ appearances with a surprising amount of options, you’re tasked with defending your home from The Rampage while also seeking its cause.

Mainline Monster Hunter games have never been ones for gripping stories, and Rise is not any different. The occasional cutscene serves as dressing to an otherwise plain salad, but the main course here is, of course, the titular monster hunting; the story is just connective tissue to give the most minimal of context to go beat them up.

Hunts are accepted in Kamura Village and are divided between single-player Village Quests and multiplayer Hub Quests, both of which are required for overall progression. This is a small step back from World’s lack of distinction between single-player and multiplayer quests as it requires you to potentially double up on hunts to progress. However, there are licensing exams that become available to progress Hub Quest ranks if you want to play by yourself and focus on Village at the start. Hunting online in a group is a painless process, and luckily I personally never encountered any significant lag or connection issues in my 60 plus hours of playtime.

Quests will take you to one of five locales. These hunting grounds check all the boxes for standard environs; you got your standard forested zone, you got your icy tundra, you got your fiery volcano, and so forth. While well-populated with flora and fauna and designed with neat little touches like old Dragonator relics, these aren’t particularly exciting biomes at first blush when it feels like we’ve been through them a dozen times before. Where Rise makes up for this deficit, however, is the sense of freedom in movement thanks to the addition of Wirebugs.

Wirebugs are a type of creature that your hunter carries around at all times that allow them to zip around the environment with ease by using them as transient grapple points. A quick button press sends you skyward almost instantly while manual aiming provides precision when needed. When combined with the new ability to wall run, Wirebugs provide immensely satisfying 3D mobility that’s intuitive to get the hang of. Traversing gaps and obstacles with well-aimed and timed Wirebug dashes to quickly close in on a fleeing target is exhilarating and keeps the thrill of the hunt alive through lulls in the fight. Beyond that, though, Wirebugs open up opportunities for exploration on a scale far greater than anything the series has attempted prior.

Nearly every single surface in the game is scalable through a combination of Wirebug dashes and wall running. Dilapidated shrines at the tops of mountains or a massive pyramid smack dab in the middle of a swamp strike imposing figures on the landscape and beg the player to check them out up close; if you can see it, you can probably reach it.

Thanks to the longitudinal freedom afforded by the Wirebugs, just the act of reaching these areas is a fun, intrinsically rewarding experience sometimes even akin to a puzzle. Chances are you won’t find your target in these tucked away locations, but Monster Hunter Rise goes out of its way to reward curious exploration.

Dotting the landscapes of each zone is various endemic life, living creatures that can be collected and utilized in numerous ways to get an edge in battle. Spiribirds come in different colors and grant bonuses to your health, stamina, attack, or defense. Various toads and beetles can inflict debilitating status effects on monsters to turn the tide in your favor. A Stinkmink can lure one monster over to another, forcing the two creatures into awe-inspiring turf wars that leave the unfortunate loser in a world of hurt.

Even though monsters are now clearly marked on the map from the outset of a quest, it often pays to take a few minutes to go out of your way to wrangle some endemic life before engaging in particularly challenging hunts. Wirebugs and your new rideable canine companion, the Palamute, make these little side trips a joy and a breeze to go on, and eking out a victory due to a snail you literally found on the ground is utterly invigorating.

Of course, it takes more than snails and birds to come out on top in a Monster Hunter title. True to series form, the hunts of Rise are white-knuckle tests of mettle that demand the entirety of your mental faculties and how you approach your encounters will vary wildly depending on which of the fourteen weapon types you take into battle.

The greatsword is a massive, hulking slab of destruction that specializes in devastating single hits while the dual swords grant agile footwork and the ability to exploit small openings with quick attacks. The insect glaive lets you free yourself of earth’s shackles with numerous aerial maneuvers while the lance and gunlance plant you firmly in the ground with a stout defense.

There’s a weapon that suits every style of play and settling on a favorite is much like finding a main in a fighting game. As you progress through the game you will unlock various Switch Skills that allow you to swap out certain weapon moves for others, allowing you to fine-tune your preferred weapon even further.

Each weapon also has unique Silkbind Attacks that utilize Wirebug charges to unleash. Not only do these attacks augment weapons further by playing to their strengths — giving the hammer an even bigger bang — or covering their weaknesses — giving the great sword some much-needed mobility with a short dash — these also play into Monster Hunter Rise’s new Wyvern Riding mechanic.

By dealing damage through Silkbind Attacks, aerial attacks, or having monsters fight each other you will eventually force them into a rideable state. This differs from the mounting first introduced in Monster Hunter 4 in the fact that you completely control the monster through Wirebug strings like some prehistoric puppet master.

Monsters control appropriately unwieldily with the turning radius of an 18-wheeler and the weight to match, but unleashing their raw potential on other monsters to deal bone-cracking damage makes for an incredibly cathartic release. Where non-target monsters were seen as target practice for dung bombs more than anything in previous Monster Hunter titles (I am looking at you Bazelgeuse and Deviljho!), in Rise they are key strategic assets to be leveraged appropriately.

And you will need to utilize all the assets at your disposal considering the ruthless ferocity your queries will be coming after you with. It’s not uncommon in later stages of the game for a monster to shave off more than half your health from a single attack and while Rise does a decent job of gradually ratcheting the difficulty up, some monsters may still seem like imposing walls to newcomers. Attacks are well telegraphed, though, and a steady 30fps in both docked and handheld mode make sure every defeat falls squarely on your shoulders, allowing you to learn from it and do better on the next attempt. Patience and perseverance are rewarded with exhilarating victories, and crafting weapons and armor from your foes serves as meaningful trophies for those triumphs.

In addition to regular hunt quests are Rise’s new Rampage quests. These tower-defense-like missions have you placing fortifications on a map to fend off hordes of incoming monsters. It is an interesting take on the standard Monster Hunter gameplay formula that encourages strategy over skill, but it falls flat in solo play as it is very easy to be swarmed and overwhelmed. Things are better when you have a full hunting party together to split the duties but these quests do not approach the raw excitement of traditional hunts. Fortunately, Rise does not force these quests often and most of their rewards can be obtained elsewhere, so they can mostly be ignored if they’re not doing it for you.

You certainly won’t be able to ignore the monsters when they’re in your face, though. Series mainstays like the draconic Rathalos and unrelenting Tigrex continue to strike fear and awe but, of course, Rise has its fair share of new monsters as well. The new flagship monster, Magnamalo, spews purple hellfire from its spear-like tail that will blow you to smithereens if you have not already been skewered. On the sillier side, the Bishaten is a breakdancing bat-monkey hybrid whose off-kilter movements make for a tricky target to track on top of the salvo of fruit it will fling your way. Almost every new monster is a quality standout winner that feels unique to fight compared to everything else and Capcom’s RE Engine does wonders in bringing them to life with grody details.

With a total of 34 large monsters to hunt at launch, Rise is about on par with World in terms of quantity. But with the true end-game currently unavailable and nothing in the way of Tempered or Frenzied monsters like in previous entries, Rise ends abruptly in its current state and may leave veteran hunters twiddling their thumbs as they wait for a new challenge. Capcom plans to supplement the game with regular free updates like previous titles — including a proper ending — but it’s hard not to feel a little cheated by the carrot on a stick.

Make no mistake, though, that Monster Hunter Rise is a complete package even now. Wirebugs add a dynamic layer to every aspect of the gameplay to the point that it is already hard to imagine a Monster Hunter game without them. New incentives to explore your surroundings cast tried and true biomes in a new light and expand the paths to victory available. While the new Rampage quests are mostly forgettable along with the story they accompany, they don’t affect the simple but immensely satisfying loop of, “Beat monster, make good armor and weapons, beat bigger and badder monster.” The thrill of the hunt calls, and it’s never felt better to answer it