Arc System Works has a long history of producing stylish, anime-inspired 2D fighters, most recently developing the critically acclaimed Dragon Ball FighterZ released earlier this year. BlazBlue: Cross Tag Battle takes characters from Arc’s own BlazBlue series, Persona 4 Arena, Under Night In-Birth and the popular show RWBY and pits them against each other in one of the more robust crossover fighting games in recent memory. This past weekend the game’s open beta was finally launched on the Switch ahead of its June 5th release date. and it was the best move Arc could’ve made. 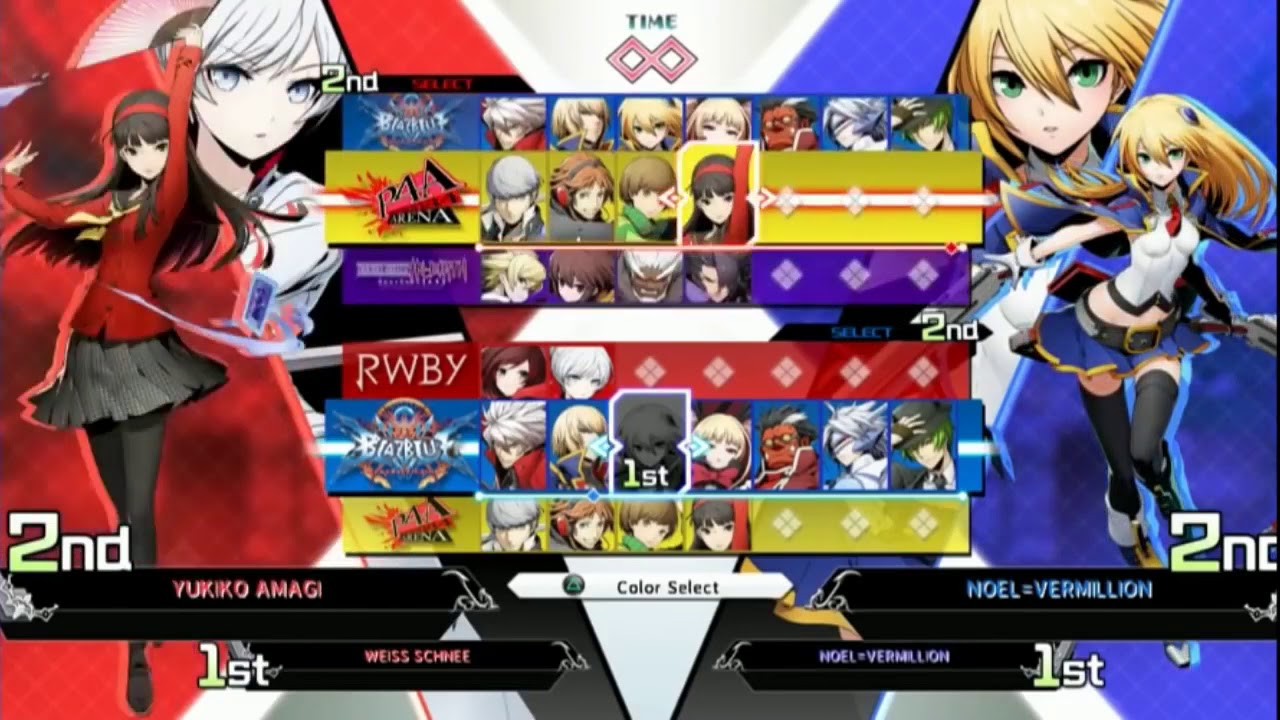 The open beta was surprisingly robust. After playing one match online, Switch players had access to the full 20-character roster and 24 stages included at launch. Modes were more limited, only allowing access to the basics V.S. mode, Tactics (tutorial) mode, and online casual play. It’s notable that though BBTAG features a story through its Episode mode, there was no traditional arcade mode to be seen.

If there’s one thing BlazBlue games nail, it’s presentation. Everything in BBTAG comes together to create a fighter that’s not only visually impressive, but that also really sells its characters. Sprites aren’t necessarily the most fluid, but the slightly choppy animation style feels deliberate rather than constricted. The character design–though based on existing characters–is simply top-notch and beautifully realized. I’m not sure if the original voice actors from all franchises involved are reprising their roles here, but the voice work in the game is also stellar. Despite not being familiar with any of these series, I can tell that the personalities of each of these characters was translated with effort and purpose to their in-game counterparts. “…both deep and approachable.”

But what’s a pretty fighting game without tight, enjoyable gameplay? Anyone who’s played a BlazBlue game (or FighterZ, for that matter) already knows how well the devs at Arc can create fighting games that are both deep and approachable. I found at least five characters that I was able to pick up in the first few hours, but it wasn’t until after 6-8 hours of grinding online that I started to actually get good with them. Eschewing ridiculous button combos for actually learnable sequences is a godsend, and the feeling of knowing that you were able to best a button-masher with a basic understanding of the game is second-to-none.

No matter how great the actual fighting mechanics are, though, BBTAG still falls victim to one of the worst and most prevalent sins in the fighter genre: a bad tutorial system. That’s right, you can expect the typical blocks of dry text before prompting you to try a move, and the actual console buttons not lining up with the combo list buttons (where’s C on the Switch controller?). This ultimately lead me to jump straight into the V.S. mode, only coming back to learn more advanced techniques much later on. DBFZ Online, This is Not

BBTAG’s online infrastructure was a genuinely pleasant surprise. Players have the option to enter into casual or ranked lobbies, host their own room, or join a friend’s. Once in a lobby, anyone who’s played Dragon Ball FighterZ should feel right at home. Lobbies are divided into sets of 64-person rooms, and once in a room players  can walk around as chibi versions of their favorite characters and challenge each other.

The pleasant bit is that it actually works this time around! Arc obviously learned a ton from their mishaps with all of the Dragon Ball FighterZ betas and implemented that knowledge here. Getting into rooms was fast and seamless, and challenging another player once inside was natural and effective. I encountered lag several times during opening sequences, but it always smoothed out by the time the actual match started. The avatars themselves are absolutely adorable, something Arc wisely capitalized on by allowing them to do things like wave, sit, jump for joy, throw tantrums, and dance. They even do little punching motions while queuing up for a match!

Times Are Tough & Pickings Are Slim

To partake in the cuteness with your favorite character, you’ll need to stack some serious cash. Each match rewards players with money, offline or online, with amounts varying depending on the mode and results. While it’s always a smart idea to incentivize players to keep coming back with unlockables, BBTAG doesn’t quite nail its economy or selection of buyables.

Players might earn 100-300 per match depending, but each lobby avatar comes in at a shocking 25,000. Players start the beta with 20,000 in what’s either a kind or dubious move, but once that’s spent it’ll take hours to earn enough for another character. This might as well be the case, though, since BBTAG doesn’t offer much else of interest for players to buy. Title plates, title frames, icons and color packs for each character make up the rest of the Item Shop’s offerings (an unlockable made slightly less valuable by the default inclusion of seven alternate colors per fighter). As it stands, there really isn’t much reason to grind outside of nabbing your favorite character avatar or unlocking even more alternate colors for them.

I went into the BlazBlue: Cross Tag Battle open beta with relatively low expectations, and came out dying for more. The characters were so colorful and full of personality that it actually made me want to go back and check out their individual series. I typically hate playing fighting games online, and yet the online experience was so seamless and reliable that I couldn’t help but come back every time. The game is dripping with style and charisma, and playing it in handheld mode just felt perfect. There were some confusing decisions when it came to menu navigation, and there were several times where I got trapped in a seemingly endless string of attacks without being able to recover. But in the end, neither of those things kept me from coming back and further honing my skills.