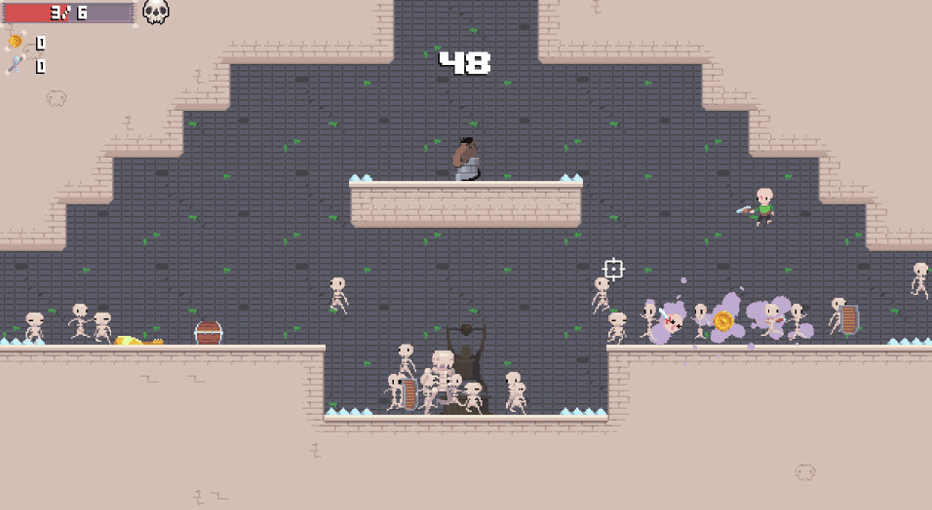 When people hear the words “bargain bin,” certain ideas tend to come to mind. They think cheap, they think old, and they think crappy. But it doesn’t have to be that way. Bargain bins can hold so much more than just the obsolete and rejected. Some of the best titles can go under the radar, completely unnoticed, because no one bothered to see past a silly price tag to realize that they had a hidden gem right under their noses.

While it’s true that a lot of the games in the lower price range of Steam and the like tend not to be of the highest caliber, there isn’t anything inherently wrong with a cheap game. Maybe it’s a small game by a new developer, or maybe someone made a game not so much for the money, but for passion. Or maybe it’s crappy. It happens. Whatever the case, no rule book has ever stated that cheapness and low quality have to go hand in hand, and as such, a dedicated party of one has decided to put his money where his mouth is. All $2 of it. At its core, Temporal Temple is simple. The protagonist is a lone gunman, trapped in a small arena and faced with a never-ending horde of skeletons. There is no winning the game, however. The gunman enters, and then will die. The only goal is to delay the inevitable.

The game starts with Bob, a stock character equipped only with a pistol. As the player progresses and gains achievements, five more characters become unlocked, each with their own strengths and weaknesses and armed with their own specialized weapons, from exploding skull cannons to laser pistols. Each character feels, looks, and plays differently, having their own advantages and disadvantages depending on the level. The levels themselves are all fixed stages, seven in total, each designed for different play styles, varying between run and gun and defending a corner. The player can encounter stores and chests lying around stages, the stores offering three randomized perks for gold coins dropped by the enemies, and the chests a randomized weapon. Enemies can also occasionally drop perks, which stack, allowing for each run to have a bit of a unique quality. As for the actual gameplay, it can be hit and miss. On keyboard and mouse, the game plays well, with solid, simple controls. Left-click to shoot, mouse to aim, spacebar to jump. There is gamepad support, a go-to for many with this genre, but aiming can be finicky here, as the reticle tends to automatically aim down when letting go of the right stick, making it hard to jump around and shoot enemies. One necessary feature sorely missing is the lack of auto-fire on many of the guns. While not as much of an issue when playing with a mouse, the constant smashing of the right trigger on a gamepad can become tiresome and stressful on the fingers. This becomes very apparent when playing the game for the first time and being forced to constantly use the trigger using the pistol. The game does try to make up for it by having a perk specifically giving auto-fire to all weapons, but it feels like something that should have been implemented across the board. Another issue with the gameplay is a lack of cycling through weapons. Since chests randomized, buying a new weapon can often lead to a downgrade of gun type with no way of going back, taking the fun out of a run. It’s also unfortunate that the game lacks any leaderboard system, either locally or online, as it could really add to replayability and community-building. For those looking for customization, Temporal Temple doesn’t have a lot to work with. With two separate bars for music and sound effects and a toggle for gamepad support and full screen, the only standout feature is a “Screen Shake Amount” option, which can often be distracting when in-game, as well as cause the occasional slowdown. Lack of options means there’s no key binding, which could have been a great feature to ease the use of the right trigger on gamepad.

Lack of variety in general is the main issue here. Even for those not skilled in shooters, most of the achievements can be unlocked after two hours of playtime, leaving the player to feel like there isn’t much else to do. There are both timed and infinite modes, but they don’t feel substantially different since most of the skeletons add five seconds to the clock when killed. In fact, the only feasible way to gain the achievement of making it to the end of a match would be to avoid shooting any of the enemies, just jumping around until the clock runs out. There’s also a hardmode, making the enemies move faster and do double damage, but it doesn’t really add much to the challenge and feels like more of the same. Once the player figures out a pattern that works on a certain map, they can basically go on forever.

The enemies are limited, either being a variation of a small or large skeleton, with or without a shield, and two types of flying ball things. Making it past just a minute in a run, which is not difficult, will spawn every available enemy in the game. It wouldn’t necessarily be such a problem if the difficulty at least ramped up, but it doesn’t raise the amount of enemies as time goes on, and it doesn’t add more variety to them, plateauing until the player either slips up their play pattern or just quits. Even the music lacks variety, every stage playing the same one song on a loop, though that can be forgiven due to the nature of the game. With all of this being said, there is still something here. Playing the different maps and characters feels good, with a variety of different achievements adding purpose to a playthrough. A particular saving grace is the inclusion of a level editor (with arguably the catchiest song in the game). With simplicity in mind, all in-game assets are available at the player’s fingertips to make the perfect level. While there’s no Steam Workshop support at the moment, the developers have said that its integration is not out of the question, and hope to grow a community around mapmaking. In general, the developers seem to be very involved post-release, already uploading several patches in response to players’ comments in the community hub; a good sign to see from newcomers on the scene. The game also features a full set of Steam trading cards, for those so inclined.

Made by a small group of friends, Temporal Temple is a product of love, and it shows. The work that these young developers are putting into this game is admirable, and it looks like they’re learning a lot from their mistakes. Is this the best arcade shooter out there? Far from it. But with all its faults, there is a fun game to be had, albeit short. For the $2 price range, Temporal Temple gives players their money’s worth, and while it could gain from more variety, there’s enough talent on display to show promises for the very near future.

This guy likes playing games. He also likes writing about them. There isn't a lot more there, but he's nice enough.