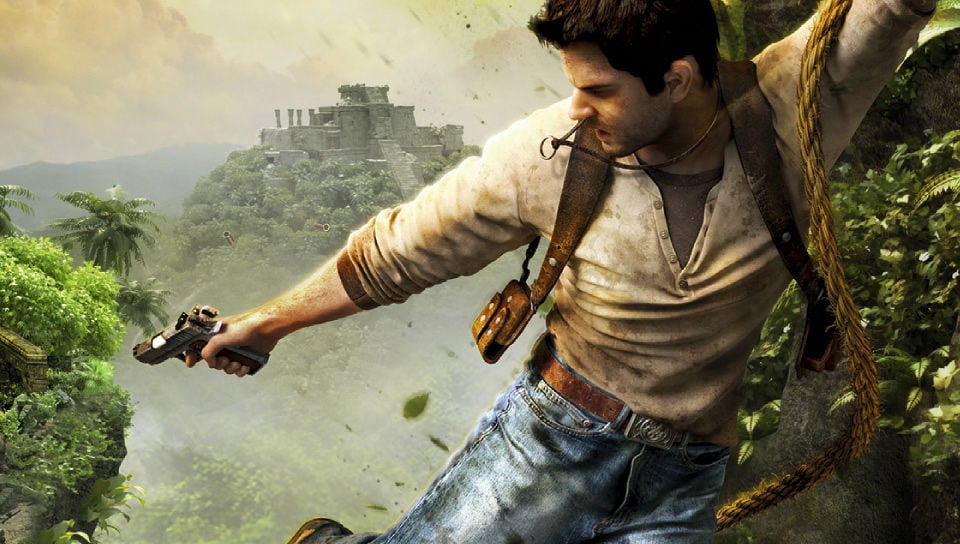 On February 15th, 2012, Sony’s next-generation handheld saw its late launch in the Americas and Europe, and with it came worries and spectacles. As the company’s next iteration of the PlayStation Portable suffered from a lack of support, the PlayStation Vita quickly had developers questioning whether their efforts to create titles for the handheld would be worth their while. While Sony may never acknowledge the PlayStation Vita’s existence anymore or Bend Studio’s undertaking of Naughty Dog’s legendary action franchise, Uncharted: Golden Abyss was one of the system’s shining triple-a launch titles that deserved a better fortune.

From a messy development to being Sony’s obvious choice for spearheading the system’s biggest advertising campaign, Uncharted: Golden Abyss became the ultimate showcase for the PlayStation Vita as it hindered its engaging adventure to be one. Like the messy charcoal rubbings and unstable bridges Nathan Drake must endure to discover his riches, Golden Abyss forced players to fight for their glory as they pushed through the tiresome aspects of a slightly glorified technical showcase to experience another stellar Uncharted entry.

A decade after its release, Uncharted: Golden Abyss still stands as the shining figurehead that resonated with Sony’s idea of what the PlayStation Vita could have been at its height. However, the game also often represented how the system could easily collapse beneath the company’s push to make the system a success. Nonetheless, even with plenty of hardships on its hands, Golden Abyss merits more than a mention from Uncharted fans and Naughty Dog.

While Bend Studio was able to uphold many of Naughty Dog’s high production values in their final product, the race to get Uncharted: Golden Abyss onto the PlayStation Vita’s launch slate took a crucial toll on development. From its inception, Golden Abyss thrived from Naughty Dog’s concerns and suffered from Sony’s demands.

Originally unable to convince Naughty Dog to stall their projects and work on the in-development handheld, Sony managed to convince their first-party developer to supervise one of the company’s partners when creating a portable Uncharted game. Eventually, Naughty Dog’s leaders settled on a partnership with Bend Studio that contained strict conditions. Initially, Bend Studio wanted to tell a story that would spotlight Nathan Drake’s origins all over the world, however, Naughty Dog raised problems with their partner’s proof of concept.

Uncharted’s creators were not in favor of sending Nathan Drake to populated locations like New York and they had already planned to explore their hero’s narrative in the sequel to Uncharted 2: Among Thieves. Still impressed by Bend’s initial concepts and wanting to see their franchise make the jump to a handheld platform, Naughty Dog helped the partner studio craft an optimal Uncharted story for the Vita. From carefully examining the game’s story to assisting the team in getting important cast members back in their roles, Naughty Dog’s supervision of Bend Studio may have seemed harsh but was only caring as they sought to ensure every party involved in the project would be satisfied.

While Naughty Dog only held good intentions for defending their franchise and keeping it on a consistent path, Sony’s objectives posed an evident hindrance to the final product of Golden Abyss even if there was no malicious desires. The company demanded that the PlayStation Vita’s launch title would utilize almost all of the system’s special features such as gyro controls, the rear and screen touch controls, an accelerometer, and the discontinued “near” application. Uncharted: Golden Abyss managed to cram in every single one of the PlayStation Vita’s functionalities into the franchise’s typical gameplay formula at the cost of hampering the game’s pacing and minor action scenarios.

The glorious technical showcase Golden Abyss presents wears thin in terms of play after the first few chapters and only occasionally gets to shine through its interruptive chasm of ideas. Whether it is having to swipe to make parries, putting intricate map puzzles together on a touch screen, or rotating the PlayStation Vita to avoid falling off a log, Golden Abyss is a prime example of fine game design being at odds with an echo to demonstrate new system features. Even though Bend Studios had worked on several Nintendo Wii and DS titles that held many of the PlayStation Vita’s functionalities, the developer was unsure how to incorporate some of Sony’s requested features into something action-packed and ongoingly tense like Uncharted.

To top it all off, Bend Studio had one major fight on its way to meet their demanding deadline: working through crunch to ensure the game would release during the system’s launch window. With such a large scope, it was a miracle the game turned out the way it did even if it had to make large cuts to its content. Supernatural enemies, the appearance of a young Harry Flynn, and more complicated action setpieces all had to be abandoned to accommodate for production time and cleaning up the final product. As such, Golden Abyss ironically became one of the most grounded Uncharted entries as it focused more on character building and smaller-scale Hollywood setups rather than extravagant supernatural-driven finales and over-the-top sequences. Perhaps though, the end date for the project was a blessing in disguise.

Underneath the difficulties of being a launch title and having to show off the console’s capabilities, Bend Studio was able to just about uphold Naughty Dog’s quality standards with their one chance to work with PlayStation’s most iconic modern treasure hunter. In terms of character chemistry, an overarching narrative, and general gameplay, Golden Abyss lives on par with the franchise’s first release. If there is any aspect of Golden Abyss that makes it a success it was bringing Sony’s console-quality games on the go with mostly positive results. When Uncharted: Golden Abyss is staying true to Uncharted’s norms it thrives.

At its heart, Golden Abyss contains another compelling tale spearheaded by Nathan Drake even if it suffers from the issues of being a prequel with no important revelations for the protagonist or key developments for the player’s perspective of him. With three mainline games out at the time of its release, there were little stakes for Uncharted’s hero to embrace in a spin-off after audiences saw the character and his partners survive three catastrophes and potentially hitch the love of his life–but that’s okay.

Golden Abyss’s simple narrative and small cast of characters connected to Nathan Drake help keep the less than important story afloat. Marissa Chase and Jason Dante are compelling companions that stand tall next to the likes of the game’s same lovable version of (a slightly younger) Nathan Drake and Victor Sullivan. Whether it was the hook to find out where characters would go or getting a chuckle out of the game’s humor and charisma, Uncharted was still itself at the heart of Golden Abyss. If it were not for the barrage of gimmick interruptions, the game’s pacing would actually work rather well as it slowly builds upon a mystery that leads players through jaw-dropping locations before the expected showdown between Nate and his overarching adversary.

At its true height though, Golden Abyss continued to bring Uncharted’s gameplay to its very best as it built upon collecting while translating its gunplay to a smaller screen. Uncharted’s controls worked exceptionally well on the PlayStation Vita despite the system having fewer buttons than the standard DualShock controller. Without any options to use L2, R2, L3, and R3, Bend Studio smartly blended the system’s touch controls with button inputs for an optimal experience that rarely ever doesn’t work. The only time in which gunplay could get frustrating is when the player has to multitask touch inputs to use scopes. Meanwhile, climbing was greatly improved thanks to the addition of giving players the option to swipe their fingers across the screen to make a path for Nate.

On a side note, a smaller issue that Golden Abyss suffered from was a move on Bend Studio to tie the game’s more complicated collectible system into their side project Uncharted: Fight for Fortune, a digital cash-in card game approved that was later swept under the rug due to poor reception with critics and audiences. Adding an extra incentive for finding all of Uncharted’s treasures along with new challenges like photography was a great idea, but tying the collectibles and puzzle rewards into another game audiences had no interest in was redundant. But perhaps this wasted opportunity perfectly represents where Golden Abyss and the PlayStation Vita failed with audiences. Sony did not have to get complicated to impress fans. Like the console itself, all Golden Abyss had to do was be Uncharted but on-the-go.

When Uncharted: Golden Abyss was being an Uncharted game, the title was thriving amongst the impressive recreation it offered of its console counterpart. Collecting, climbing, and combat remarkably worked without the need for reinvention on a handheld. Graphically the game captured the same magic that Drake’s Fortune formally presented when first being shown on PlayStation 3 hardware. Even with all of the game’s technical problems, Uncharted: Golden Abyss still stands as a wonder of its time and a relic in a bygone era for Sony–the game was a promising experiment for what could have been.

After ten years, Golden Abyss is still a must-play exclusive for PlayStation Vita owners and an absolute recommendation for passionate fans of the Uncharted franchise who have the means to access it. It may be far from perfect unlike Nathan Drake’s other globe-trotting adventures, but Golden Abyss should not be discounted from Uncharted’s greatness. As the PlayStation Vita’s digital store hangs by a thread, it is at least reassuring to see that Naughty Dog has not forgotten the efforts Bend Studio put into Golden Abyss even if the game did not make the cut for the Nathan Drake Collection. Perhaps one day, if Sony decides to introduce another Uncharted compilation in the future, the franchise’s handheld treasure will get a fair chance to be unearthed once again with a remaster.

Nate’s escapades across South America and into the Golden Abyss still deserve a better fortune.