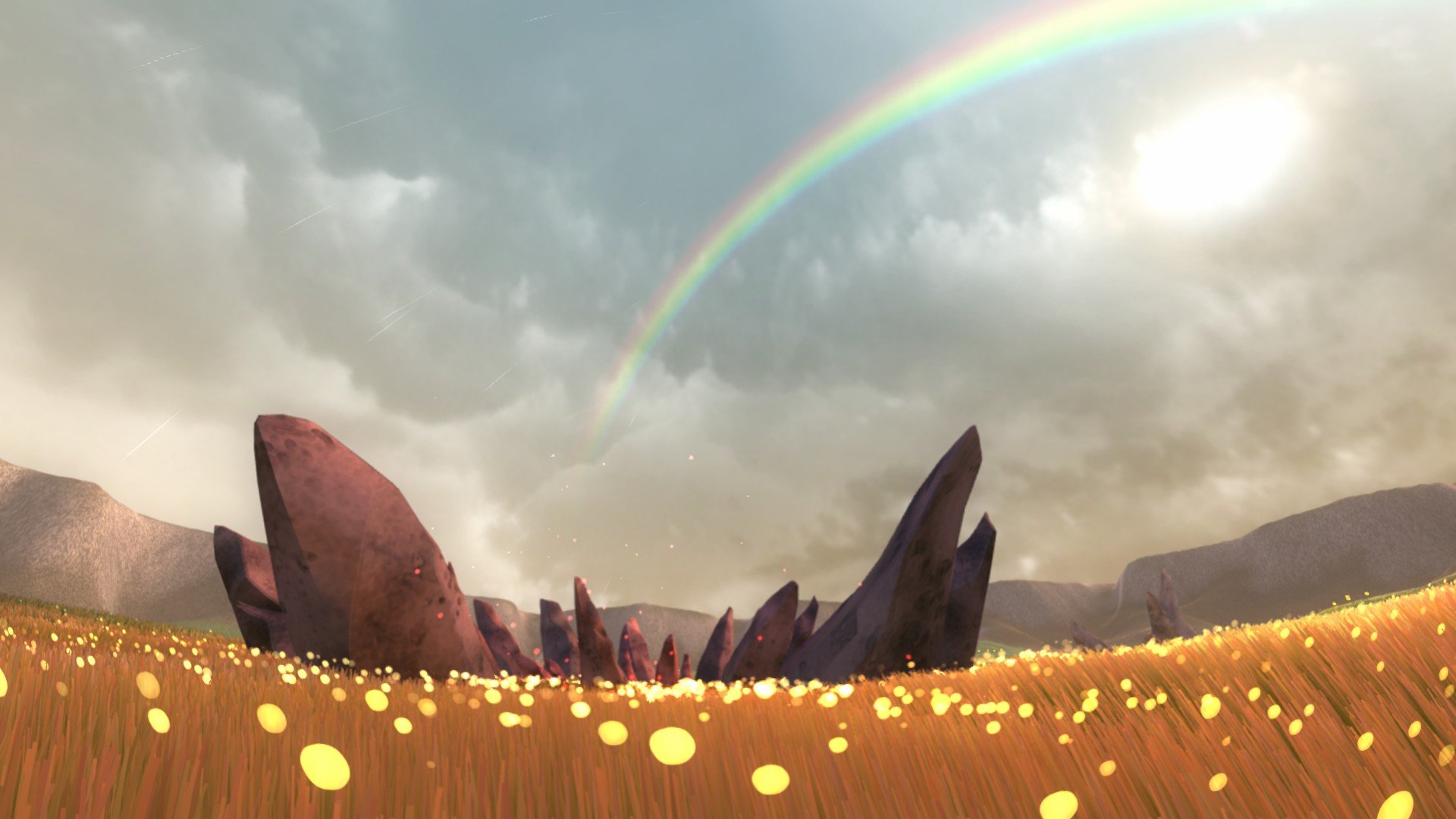 The language of videogames constantly evolves and has over time cemented itself as a
form of nature. It is a language we all learn both consciously and unconsciously. It’s how we
know what a floor that will crumble looks like, that a cracked wall means “bomb here for
something good” and that those unique pillars around the world means a hook-shot upgrade is
coming. But swathed over all these mechanics is something that goes much deeper into our
artistic roots long before videogames even existed. It’s the language of colour.

We can start a game we know nothing about but immediately and intuitively
understand what the interface and world are telling us. The green (or maybe red) bar is health,
the blue underneath is magic. We know that red potions heal and purple water damages. The
use of colour in game design was not something decided at its advent with randomly chosen
colours; the language of colour is something we have learned throughout human history. It
comes from our cultures, our understanding of nature and our emotions. It’s both genetic and
memetic.

Green and red are colours often used for health. They represent life in the flora and
fauna of our world. Green is a colour commonly associated with life due to its prevalence in
nature, in plant life. An area void of green is an area void of life. This is seen in frozen
wastelands, deserts, and cityscapes. Red on the other hand is the colour of blood, the colour of
the life force itself in humans and animals.

Green and red are often used in tandem. Green health bars turn red when health is low,
because while blood keeps us alive, seeing it, seeing the colour of red, is something we as
human beings associate with injury and perhaps death. We watch the leaves on trees in autumn
turn red before they vanish in the winter. Two seasons that constantly remind us of the cycle of
life and our own impending autumn.

Another thing that ties red to life is its connection to fire. While fire in a modern world
can be seen as a disaster, throughout human history fire has been a sign of warmth, of rest and
home, a sign of people and thus safety. While red lets us know a red barrel will explode when
shot, it is also something akin to a fire in the distance; it draws us in. Just like the other colours
of light; yellow, orange, white and the black it inhabits.

As gaming shifted from 2D to 3D environments, navigation became an element that
level designers had to pay more attention to. Designers subtly use space, movement,
environmental lines, and colour to guide players to where they need to go, often in a way they
don’t even realize. This can be the intersection of lines, objects framing a path, the movement of
wind or birds, and paths of colour guiding your eye. It’s how you instinctively know where to
go in a chase sequence like the ones in Uncharted 3 or Mirror’s Edge.

Yellow & orange, and black & white are often reserved for navigation. These are the
colours of the fires or lights in the distance and stars in the night sky. In the past, travelers used
nature to guide themselves on long treks whether it was star constellations or a lighthouse or a
town in the distant horizon. Maps and sea charts, drawn in black ink, began to slowly
incorporate yellow showcasing built-up areas, deviations in paths and bearing lines that helped
with the difficulty in traversing a spherical world. Even in maps today we use white, orange
and yellow to indicate major roads and highways.

While white and black work for stark contrast, like lines on a road, yellow and orange
are colours that don’t look out of place yet stand out just enough to draw your eye. A patch of
flowers, a pipeline, or a fire escape. Naughty Dog (developers of Uncharted and The Last of Us)
often use yellow to subtly guide a player without resorting to icons. Yellow marks metal
ladders, girders to cross, beams and pipes to climb up or jump to and even caution tape to
guide. The Horizon series uses this as well with yellow beams in the ruins of old Earth. Mirror’s
Edge, a game focused on fast-paced parkour and chase sequences, takes place in a future
dystopia where everything is so clean and white that splashes of orange, red and yellow line
hallways, stairs, and appliances stand out creating not only a stylistic world but a guide. It
ensures you remain on track even in the chaos of a chase where a split-second decision means
life or death.

In games that take place primarily in darkness or have sections at night, the use of the
contrast and light becomes more apparent. The latest Thief game uses white scuffs and
scratches on services to guide players through the rooftops. A Plague Tale uses white flowers to
create areas to sneak through that naturally lead forward. Both these games often place lit
windows, or braziers by a gate ahead as goal post that also helps orientate and guide.
Blue is commonly tied to magic or energy. Blue is a colour that is both common and rare.
It is natural yet frequently unnatural. While it is the colour of the sky and water, it is a colour
rarely seen in nature. Blue plants and animals are quite uncommon because there isn’t really a
true-blue pigment found in nature. It’s a trick of light. While we associate blue with the natural
world, we also associate it with concepts of the inner self. Water is used frequently when
discussing martial arts or mindfulness. It represents concepts like tranquility, focus, and
discipline. It’s because of this dynamic that we often tie it to magic.

Magic is something that in worldbuilding is natural yet rare. The population may know
of magic, but only a few can use it. It’s an inner discipline that is frequently tied to tapping into
nature and conjuring it in a form known as magic.

Blue, worldwide, is the most popular colour. Studies have shown the colour to have a
calming effect on the brain. It lowers your heart rate and promotes peace, leading offices, spas,
counselors, and classrooms to use blue in their spaces. Blue is also, however, the least appetizing
colour. With the lack of blue food in nature, our brains perceive blue as poisonous whether you
are aware of it or not. Old fad diets even suggested eating food on blue plates or in blue lighting
to discourage overeating. Blue while calming like the ocean, also reminds of its danger and
triggers a biological response of a natural, ingrained fear of the abyss. Its power and
otherworldliness are what lend it to magic so perfectly. Unless we are talking about dark
magic which is often purple.

Purple is as rare as blue but holds a more sinister place in games, history and in nature.
Purple in games is the colour of the unnatural and alien, the poison and infection, the tainted
and possessed, the corrupt and malevolent. Purple is often used to show this otherworldly
danger. We see this in toxic bodies of bubbling purple water in Metroid and Mario, on torches
of purple fire in the castles of Dark Cloud and Dragon Quest, in the infection spreading through
the worlds of Hob and Ori and the Blind Forest, and the robes of a sinister villain like The Dark
King from Mystic Quest.

Purple is not often seen on the creatures of our planet. It is not a helpful colour for
camouflage from predators. However, many use aposematism, an act of advertising through
bright colours that they are dangerous to attack or eat, that they are venomous.
Furthermore, the rarity of purple meant it was the most expensive dye to produce which
is why purple became tied to royalty. Purple to the commoner became a sign of power and
wealth but it wasn’t connected to a benevolent ruler, but usually a corrupt one. Roman
magistrates for example were known for their purple robes.

These things together naturally demonstrate something malevolent and corrupt that is
dangerous to mess with. Something that does not belong.

While we continue to defy colour conventions and new events cement themselves as
part of our history, perhaps this language will evolve into something incredibly new. But these
colours and their meanings will always live on somewhere inside us and in the history of
videogames.

Geordi fell in love with storytelling when he was just four years old. Watching movies that kids maybe shouldn’t, reading books with too many big words, and exploring new worlds on his NES and SNES, he found his passion. Left with a deep empathy for countless worlds and all who inhabited them, he pursued not only media, but firefighting, much to the confusion of his teachers. When he is not consuming every film, book, and game he can get his eyes on, he’s writing about them… and perhaps making his own.