Vampire The Masquerade: Bloodlines, aside from having an insanely obnoxious name, is probably one of the best PC games ever released. It’s buggy as hell, full of half-baked ideas, goes downright insane towards the middle, and aged like milk, just like all PC classics. It also was just re-released on GOG.com which is great news for anyone trying to avoid Steam or DRM in general these days. It also means another reason to talk about VtMB again, an opportunity I’ll take full advantage of.

VtMB is one of the most interesting attempts at a game of the early 2000s. It’s the video game adaptation of a pen & paper game that not a lot of people know about, as well as the follow-up to an Interplay game no one played. It had exactly two things going for it:

The team banked pretty hard on the second one, and VtMB was actually finished before Half Life 2, but was delayed due to a contract with Valve. They made pretty great use of Source 2.0, specifically it’s ability for lip-sync and facial movement, although VtMB lacks a lot of the texture work of Half Life 2 and other Source 2.0 games. 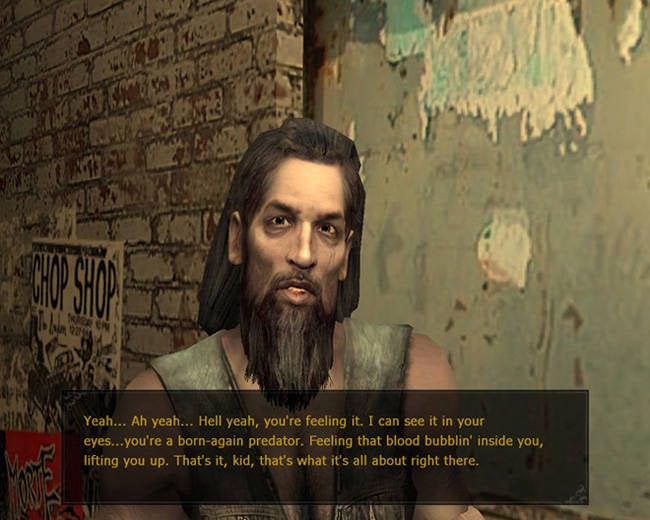 Actually, VtMB lacks a lot of polish pretty much everywhere. There are dozens of half-baked ideas still lying around, some completely in plain sight. When Activision decided the game was going to use Source 2.0, they failed to realize that maybe using an engine absolutely no-one had any experience with could cause some issues. As a result playing VtMB can sometimes feel like working through an unfinished beta, and it’s easy to get caught in one of the games many bugs without knowing it.

Thankfully, like so many classics on the PC, the community saw the diamond in the rough, and in the decade since it’s original release there’s been a series of unofficial patches to fix the bugs, as well as a number of overhaul mods and expansion packs to work the game into a more playable state. While some games deserve to be played in Vanilla before jumping into the modding community, VtMB isn’t one, and here’s a helpful thread full of patches and mods that make it more playable.

And it is a game worth playing. It takes a lot of ideas from Deus Ex, an equal amount of ideas from traditional P&P gaming and throws them into a blender with a healthy helping of sex, guns, and the sleazy nightlife of Hollywood. It’s got humor, it’s got horror, it’s everything great about late night 90s TV in one interactive experience.

You awake as a recently turned vampire in Los Angeles. Your sire, the vampire what turned you in the first place, is immediately beheaded, a fate you’re only barely saved from thanks to some quick politics in the local vamp community. In exchange for your continued un-life, you’re recruited to act as an errand-boy/girl for the local vampire prince, the self-imposed ruler of the area vampires. Pretty quickly you figure out that the undead are exactly like high school and you find yourself caught between the different factions vying for control of the night.

One of the biggest themes in VtMB is choice and consequence. Every quest has multiple ways to approach it, ranging from blasting fools with a shotgun to seducing and convincing your way past all opposition. You can’t do a pacifist run of the game, since certain sections will always require you to take up arms, but you can significantly reduce or increase the body count based on how you approach the situation. More to the point your approach will have different repercussions with the different vampire factions and it’s plainly impossible to satisfy everyone, no matter how hard you try. Eventually you’ll have to throw your chips in with someone and it’s up to you to decide who and why. 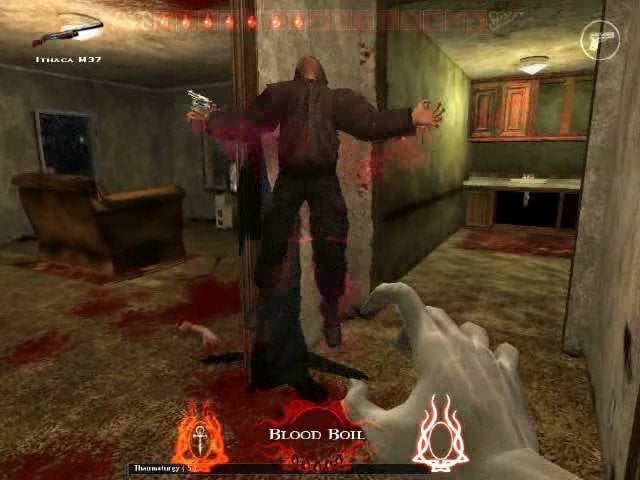 The world of VtMB is probably the most interesting part of game. It’s LA by way of extreme exaggeration, inspired by pulp fiction, neo-noir, and softcore smut all wrapped in a layer of mysticism and occult magic. It’s the version of LA mothers in the mid-west use to scare their kids, and teens from the farm belt dream about at night. Everyone is a star, everyone is perfect, and everyone has ten or twenty skeletons in the closet and a 12 gauge under the bed. The characters that inhabit this darkness are similarly twisted and over-acted, larger than life with huge personalities and glaring flaws to ground them. A lot of them have to deal with being several hundred years old, while keeping up with one of the fastest moving cities in the world, skeletons with cell phones and corpses with web pages. It’s an interesting mixture of watching ancient beings prattling about the state of the film industry or running a club, all the while worrying about ancient blood magic and apocalyptic prophesies.

There’s plenty of back story and lore too, drip-fed through conversations and investigation. Nearly every character has a past, and a lot of them have an angle to play too, provided you can dig it up. The way the various plots you can become embroiled in weave themselves is masterful, and VtMB still has some of the best RPG quests I’ve ever played, managing to mostly avoid the old tropes of “Go to X, and kill/activate/collect Y”. It may not be The Witcher 3, but in 2004 it was downright impressive.

Unfortunately there really is only one Vampire: The Masquerade  game. Well, two if you count that other one. There were supposedly plans for a sequel, but the developers, Troika Games, have since gone under and scattered to the wind. It’s a shame, since a more modern setting would fit perfectly with this style of game, and Deus Ex: Human Revolution showed that not only does the formula of this style of game still work, but if it’s done well people will buy it. Last we heard the IP had been sold off to Paradox, and this is probably the best move for it given their outstanding track record, not to mention one of the best RPG devs in their wheelhouse. Maybe one day we’ll see the IP resurrected, until then there’s a world of darkness to explore in this underrated classic.