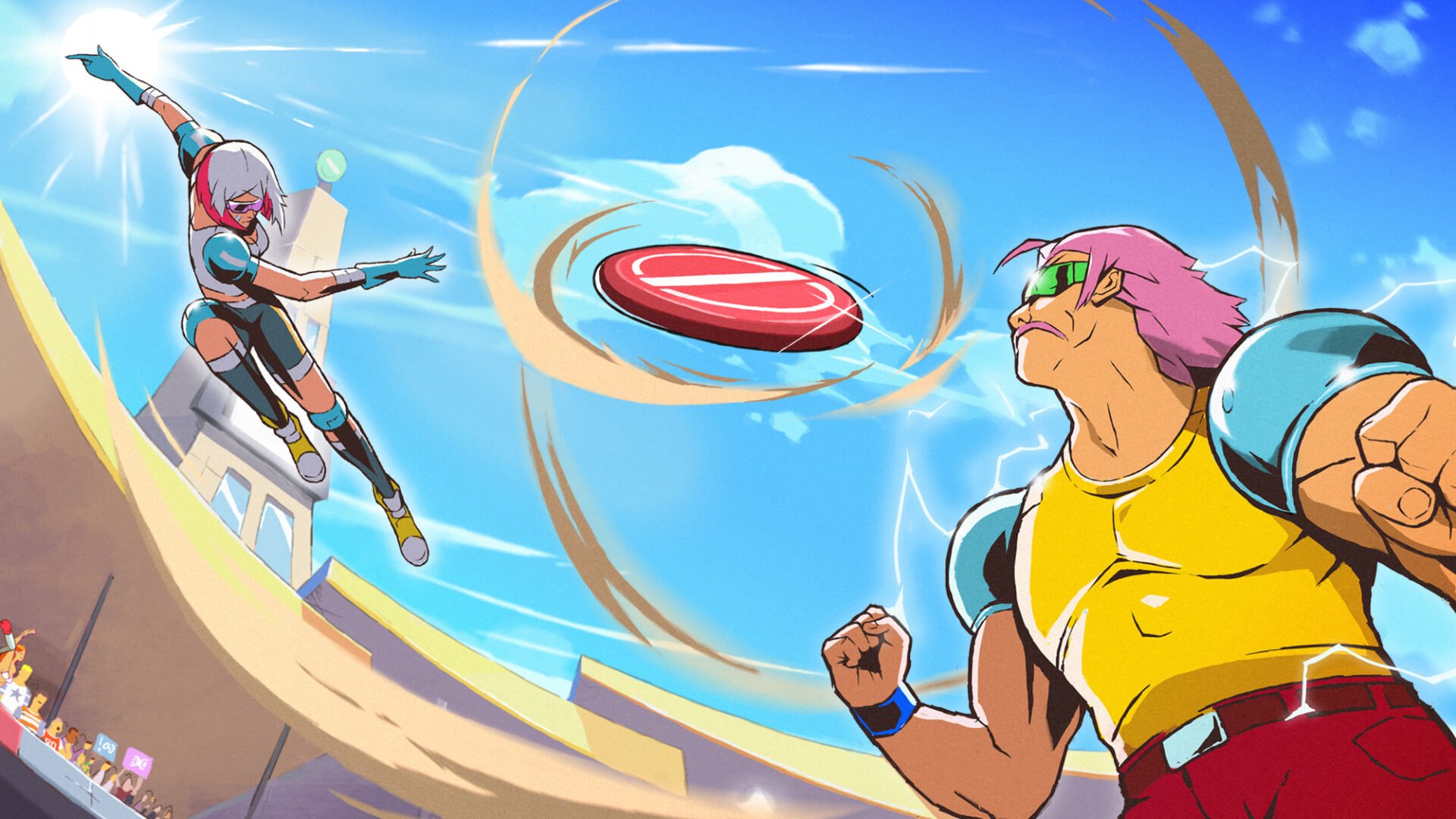 Think of the most intense game of frisbee you’ve ever played, throw in a dash of soccer and tennis, and you’ll get something like the little-known, totally real sport of windjamming. First introduced with Data East’s 1994 arcade classic Windjammers, the retro revival experts at DotEmu (of Streets of Rage 4 fame) have seen fit to revamp the game for a new generation of players with an original sequel in the form of Windjammers 2. It doesn’t matter whether you got to spend your childhood pinching pennies for another round at the arcade original–this sequel refines and extends the Windjammers formula to make it one of 2022’s first great multiplayer experiences, a package that champs and series novices alike can’t miss.

Windjammers 2 blends the format of a sports game with the fast-paced action and combos of a traditional fighting game. Every match plays out simply enough at first: each player guards a goal at their end of the stadium, and they attempt to throw a disc into their opponent’s goal zone. Each player is both defense and offense, simultaneously—you’ll sling the disc, but you’re also responsible for catching it before it lands in your goal. The controls for basic actions like moving and throwing are simple enough, but things get a bit more complicated through the addition of lob shots, tosses, jabs, jumps, and over-the-top special moves that add new dimensions to the gameplay.

There’s no denying that the game’s mechanics can pose a lot to wrap your head around, and your first few matches may feel like you’re already being thrown in the deep end. But thankfully, it doesn’t take too much floundering to learn the ropes, and once you do, it all clicks into place. When you’re in the middle of a match, frenetically dashing from side to side to protect your goal and send the disc soaring past your opponent, it’s hard not to get caught up in the adrenaline. Hectic and frenetic in the best way possible, each match of Windjammers 2 is a satisfying test of skill no matter whether you’re playing against an NPC or a real-world player. Gameplay demands lightning-fast reaction times and nimble reflexes to get points on the board, but no matter how chaotic it can become, the gameplay’s equally high speed and high stakes make it difficult to resist coming back round after round.

A lineup of ten playable characters, as well as a selection of unique stages, also help add some variety and strategy to the experience. Each character has a balance of power and speed, determining how quickly they can move across the field and how forcefully they can toss the disc back at their opponent: the girthy Max Hurricane wields incredible strength and can send a disc crashing through even the swiftest defenses, but he’ll have trouble matching the sheer speed and versatility of a lightweight competitor like Sophie De Lys. The stages, meanwhile, each introduce a gimmick of their own: some will feature adjustable dividers in the middle of the field that can deflect your disc, while others might change the number of points awarded for each goal. It may not be the largest roster around, and the stages may not offer dramatically different experiences between each other, but there’s more than enough variety here to let any player find a character and stage suited to their preferred playstyle.

Just like its arcade predecessors, Windjammers 2 is at its best when you’re side-by-side with your opponent, duking it out on the field in local multiplayer. That’s not to say that the game lacks any offerings for solo entrants to the championship: rather, it boasts a full-fledged single-player arcade mode that takes players through a gauntlet of matches against the best (computer-controlled) Windjammers champion hopefuls on a quest to win it all. Complete with two mini-games interspersed throughout plus a unique ending cutscene for each character, this mode may follow a tried-and-true formula for an arcade adventure, but it nicely complements the multiplayer main attraction and provides a welcome opportunity to practice with each character.

Beyond the multiplayer and arcade modes, though, Windjammers 2 doesn’t provide much else. Two main gameplay modes is a meager lineup of content even by arcade standards–including dedicated training modes or additional minigames would have gone a long way towards making the game more of a robust package. As it is now, if you ever tire of the straightforward Windjammers gameplay, you’ll be fresh out of luck. Of course, there’s something to be said for a game that knows what it sets out to do and does exactly that: Windjammers 2 reinvigorates the classic arcade gameplay loop with a fresh coat of paint, some new mechanics, and an expanded roster. It’s simply disappointing that the game didn’t aim for higher ambitions.

The core content may lack some substance, but like all of DotEmu’s previous games, Windjammers 2 is brimming with style. Bursting with neon colors as any loving tribute to the pop culture of the 90s should, Windjammers 2‘s hand-drawn graphics are nothing short of stunning in action, making every moment of gameplay a fluid feast for the eyes. It’s the little details packed into every frame that make the experience come alive: the excited audience members cheering around each stadium, the players’ hair flowing in the wind, and the clouds of dust sent shimmering through the air due to the sheer speed of the disc hurtling across the stage are just some of the artistic touches that demonstrate the love poured into the game. Throw in an upbeat soundtrack packed with 90s-inspired pop-rock tunes, and Windjammers 2 delivers some beautifully beachy vibes.

The first Windjammers was an arcade romp nearly lost to time as other multiplayer hits hogged all the attention in the mid-90s, but Windjammers 2 gives the series the attention it deserves. Challenging yet compelling and beautiful in motion, Windjammers 2 is a striking multiplayer romp that’s easy to come back to time and again. The full package may not be as robust as it could be, but with the core multiplayer content being as strong as it is, players will still find plenty to love. DotEmu has done it again and delivered a beautifully polished retro yet modernized package, giving windjamming champs an opportunity to jam out once again.