Nightmare Creatures II marks the end of the 90s and the beginning of the 2000s almost perfectly.

Released first in April of 2000, it’s a cumulation of very specific sensibilities at the literal turning point of two very different decades. Going in, it’s immediately obvious that, even for the time, the execution of it’s imagery and atmosphere is deeply flawed yet captivating in a way that strikes a personal chord with me, and I’d imagine also a chord with a lot of folks who were into the same stuff I was as a kid.

But, removed from the poetry, it’s…not technically what anyone could call a good game.

While Nightmare Creatures II takes place in an early-to-mid 20th century setting, its inspiration isn’t from that time period but rather a takeaway of the death rock, industrial goth and metal scene of the 1990s.

Locations vary from a mental asylum, to a German Expressionist graveyard, to a haunted house-esque film theater in Paris, complete with a projection room with Bela Lugosi’s face beamed to the screen. Like most games of its time, levels are designed like stage-backdrop rooms, often giving the feel of cardboard cutouts – which works with Nightmare Creature II’s theatrical aesthetic.

The enemies, or I suppose the “creatures”, come in the form of big slow zombie guys, slender experimental looks things with boobs, some guys with chainsaws and a really dumb laugh, evil grey Hulks, and other such things. They’re not exactly scary, and really don’t feel like they fit within the same universe, but as individual concepts, most are interesting enough to remember. 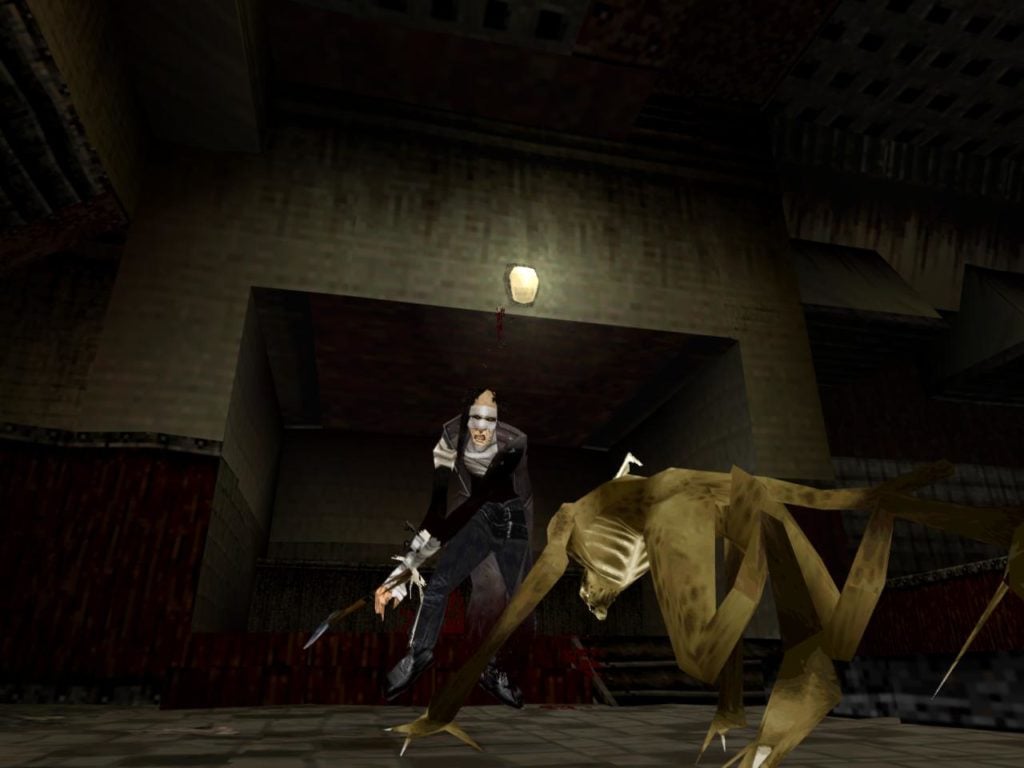 Our protagonist, Herbert Wallace, is a trench coat wearing, bandage-faced, ragdoll looking dude, whose facial features simply have to be modelled after Marilyn Manson…if Manson was a burn victim.

Oh, and there is a story to back up all this imagery, but it’s not that important. Some evil guy (named Crowley, because why the hell not?), who was also the antagonist in Nightmare Creatures 1, is trying to take over the world by using the Necronomicon or something, it doesn’t really matter.

A lot of the game, including a whole campaign with a completely different character, was cut from the final release, and it looks like not a lot of work was done to make the remaining part make all that much sense. But hey, the imagery works really well on its own, in a kinda unrefined, adolescent way. I’m pretty sure my MySpace profile looked a lot like how this game does.

And did I mention that Rob Zombie songs are used in cutscenes? Nightmare Creatures II probably deserves some credit for licensing Rob Zombie’s music in 2000, but not using “Dragula”; a true miracle.

Predating the standardized third-person camera system we have today, character movement in Nightmare Creatures II is pretty typical for a 3D game of its time, with Herbert controlling a bit like a tank with a camera fixed behind him. It’s not as awful as it sounds – it’s easy to get used to and holds up pretty well today, unlike something like Dino Crisis.

Herbert also moves a lot like Lara Croft does in the early Tomb Raider games, inheriting her hilariously high lunar jump that is completely out of place here, and does not exactly fit the very narrow passageway design of the levels.

Ol’ haggard Herbert doing twenty times a Michael Jordan jump to get over an ankle high obstacle is something else. 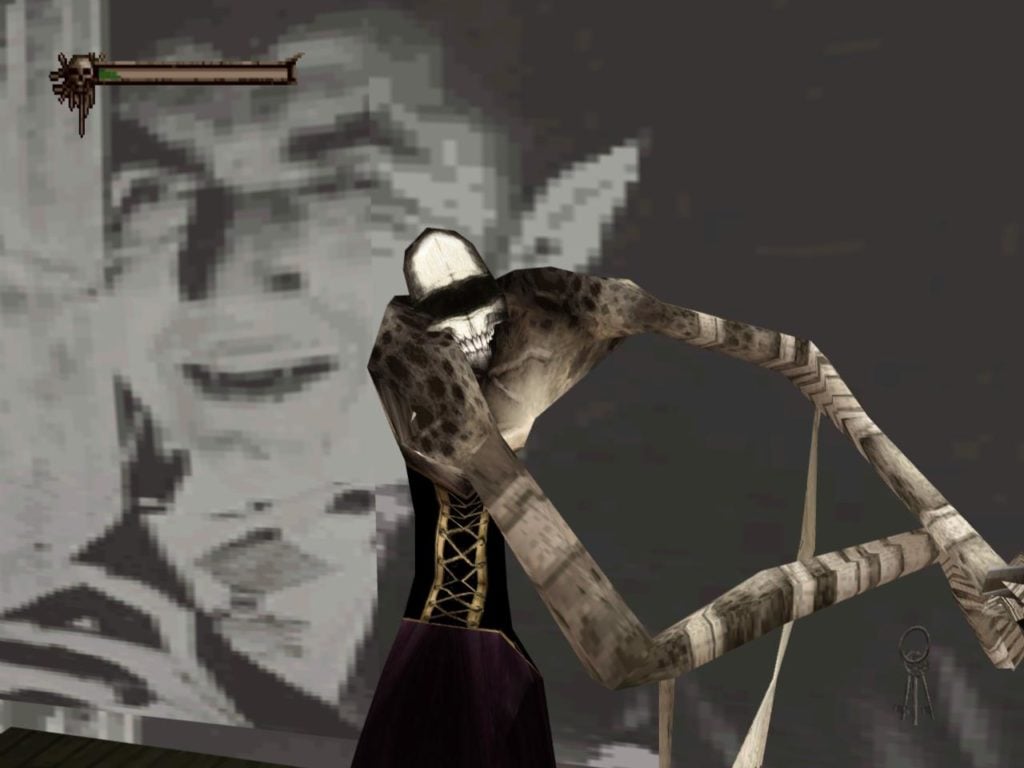 Speaking of obstacles, if you’re looking for sensible level design, you won’t find it here. The game’s progression takes you through a series of levels, but there is simply little to no consistency in what difficulty of enemies you’ll be fighting where, and what items you’ll get when.

Health items, represented by medical blood bags of course, are sometimes scarce, sometimes needlessly abundant. Same goes for “spells”, which are items usable in combat, which, save for maybe one or two, all do the same thing: kill an enemy in one hit. That’s basically it.

(Some of them make enemies explode with a really cartoony splatter sound, which is pretty great if you ask me).

Also, this might be the first game where finding a health item can be a problem.

You see, health items are used automatically upon collection, even at full HP. But, breaking a box often moves Herbert in such a way that he steps directly into whatever item is in there, collecting it. So, if you want to save a health item for later, you have to be really careful about it. It’s a bit of an annoying gamble each time you come across a box.

But what about the combat? Well, combat is more like a sketch of an idea than something that should be in a final game. You have an axe, with which you can do a vertical or horizontal slash. You also have a kick that’s pretty useless against most enemies. You can do two basic combos by mixing up your attacks, which can hack off limbs and heads, though some enemies can interrupt your combos with a throw.

Watching an enemy’s movement can be helpful, as you can do little hop dashes to get behind or away from an enemy, but it’s only worth the effort for the more difficult enemies. For the rest, you can kinda hack away and hope for the best. Or, if you don’t want to bother with an enemy, just use a spell.

It’s a janky experience, as sometimes your attacks refuse to connect, or Herbert gets stuck in place as the game glitches out. 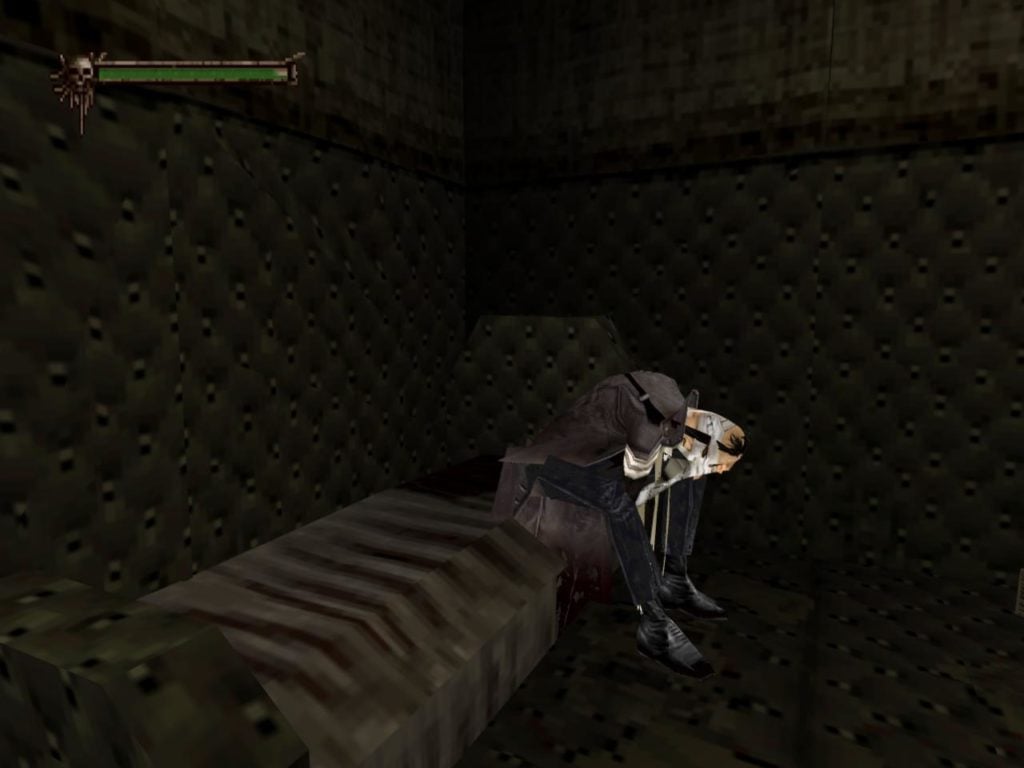 Sure, Nightmare Creatures II isn’t what you would call a technically “good” game.

It’s a bit of a buggy mess, its level design is all over the place, your character moves and fights awkwardly, and the enemies are pretty awkward too. The game attempts to create a meaningful narrative, but when it’s not hodge-podged together, its writing and delivery is unintentionally goofy.

What it’s got going for it is a charm that is wholly unique to itself. What’s lost in creating a “good” game is made up for in the sheer ambition oozing in every corner of the game’s atmospheric world.

Yeah, it’s mostly corny, but that’s part of the charm, just like any good B-movie or shot-on-video horror flick from the 80s.

You just have to appreciate the scope of what the developers tried to do with what they had, even if it wasn’t successfully conveyed. Their lofty goals might have been unrealistic but, it’s a good reminder of the Wild West days of three-dimensional games.

Nightmare Creatures II is the kind of game that exists in a perfect time capsule, and revisiting is like re-reading early works by writer who went on to do better things. But, within that first spark is something beautiful, and at times unattainable, that explains where everything came from.

There’s a charm in its, for lack of a better word, purity that is far more important than any technical achievement.

For that, Nightmare Creatures II is an aged yet ageless gem.

“Way Back Review” is a recurring column by Maxwell N where he reviews and talks about games of all shapes and sizes, classics and obscure gems, from….well, way back.