The Virtual Boy is now known as a catastrophic failure. The console’s reputation is nearly as low as ET for Atari. It’s easy to say it was always poorly conceived, hindsight is a wonderful thing. With its limited library, it’s easy to see why the Virtual Boy usually ranks bottom of Nintendo’s consoles. The contemporary reaction though was a lot more optimistic. Original coverage of the console reveals excitement at the ‘coming wave’ of virtual reality. The Virtual Boy was the first consumer-priced VR headset. The first of a new type of entertainment. The reviews were mixed, but it was not critically condemned.

The games that came to the system all had their fans. The clunky headset, strange graphics, and headaches were often just the price of admission for this level of immersion. It was viewed as a technological achievement, but it seems it may have missed its moment.

The initial reaction ranges from excitement to bewilderment. No one suggested that the system is too bizarre to ever be successful, the confusion was over where this was going to take home entertainment. Nintendo Power toed the party line. It’s always hyperbolic excitement promised to:

“To bring you exclusive, in-depth coverage of this revolutionary game system. There’s been anything like Virtual Boy, and you won’t want to miss even one 3-D moment.”.

There never had been anything like the Virtual Boy, even the grown-ups agreed.

An article in The Observer begins by proclaiming that ‘Virtual Reality draws a little closer to actual reality this week with the launch of the first affordable VR headsets.” This might sound familiar to the recent wave of VR. This piece goes over the high-end headsets before coming to Nintendo’s entry. Many non-consumer prices units are discussed, and the future of VR seems bright: 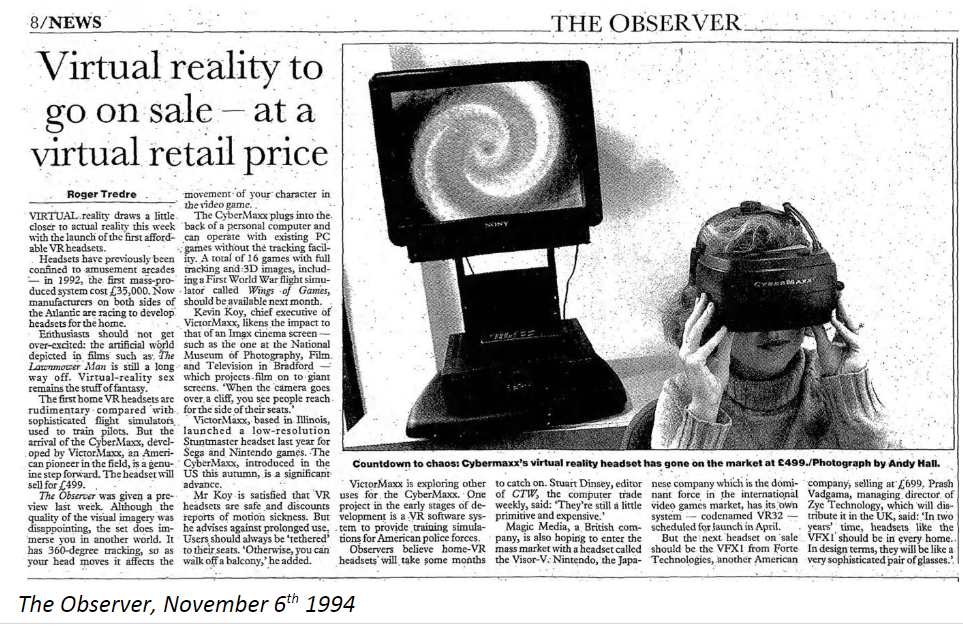 The majority of Nintendo Power’s early coverage focused on the tech inside of the Virtual Boy. Praising the accomplishment of making the 3D image. Promising upcoming games that would render Star-Fox like experiences in the red and black screen. This focus on tech already suggests that even Nintendo Power saw the idea of the system as the biggest selling point.  It also shows how central the future of VR was to the Virtual Boy. It was a low cost beginning in a promising new field.

After devoting a few issues of coverage to very technical explanations of how the system worked, Nintendo Power eventually progressed onto what you could do with the system. While they hype up all of the confirmed titles, they also devote a lot of space to discussing what 3rd party developers are working on the system. They are the only publication that talks particularly about the system as a platform for the continued release of games, rather than a tech curiosity. 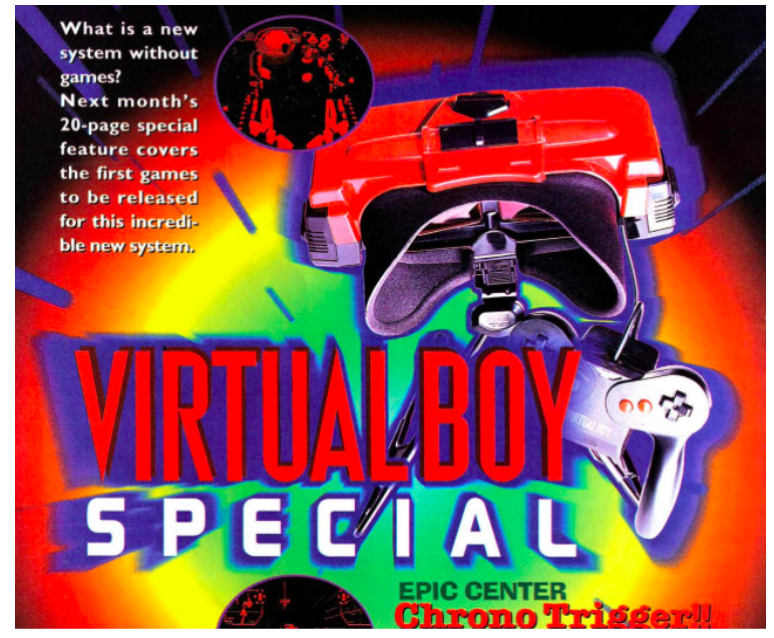 The Nintendo Power staff are the only people asking this question. From Issue #74

What Even is A Virtual Boy?

The excitement over VR extended across to the next E3. One reporter gave a rundown of all the virtual reality being shown off. Its coverage of the Virtual Boy contains this gem:

“Nintendo did, however, put the Virtual Boy system on display. This odd-looking red machine is touted as a portable virtual-reality unit. Scheduled for release in August with a price tag of about $190, the unit almost defies description.

I’m not sure yet whether that is good or bad.”

Defying description is a reaction that’s aged well. The ‘tough on the eyes’ factor was already at work. However, this reporter suggests this could change. Implying some hope that the system will arrive more polished. The language that was used to compare each VR offering is nearly identical to its modern counterpart.

The Virtual Boy was proof that the VR concept was finally becoming affordable. This sort of tech could even be a games console for kids. That was the impressive part, the concept. One article discussing Nintendo’s future prospects summer it up this way:

“With the appearance of Virtual Boy, Nintendo has taken video games hand-held children’s toys and into the hi-tech equipment league. Characters jump out and fall away through space instead of just falling down as in existing games.”

This gives Nintendo a lot more credit for immersive VR than they probably deserve. It also positions this new technological central to Nintendo’s business. Increasing competition is now making things harder for Nintendo, and apparently, a high tech headset is their best weapon against Sony.

The release brought a different type of coverage. The system wasn’t exactly beloved, but it was not critically condemned. At least at first. The Virtual Boy definitely had its champions. Many found the system impressive and genuinely revolutionary, even some people outside of Nintendo Power. 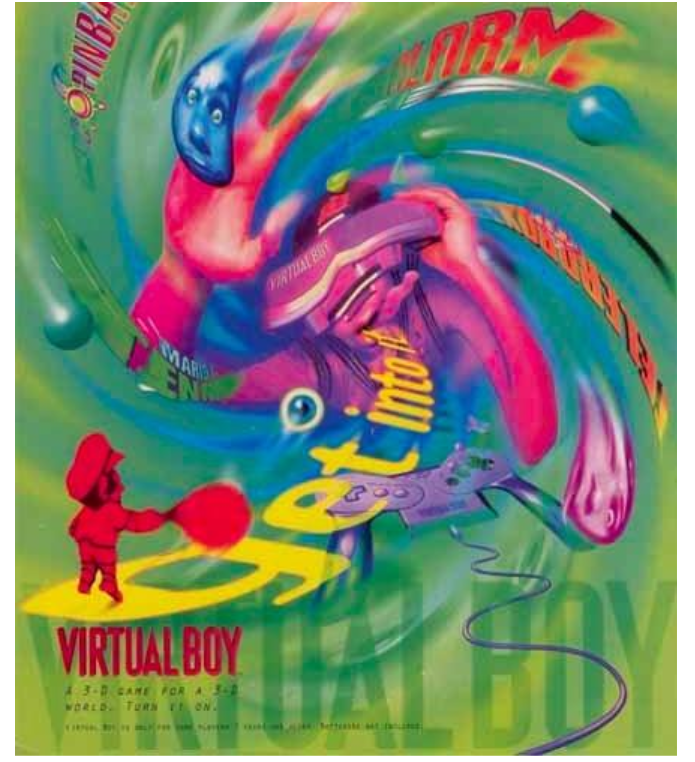 The drawbacks and quirks were noticed, but they didn’t ruin the experience. A review that settles by wondering who exactly the Virtual Boy is for, is still full of praise. While addressing headaches and awkwardness of the system, Aaron Curtiss wrote:

“Virtual boy with it’s immersing three-dimensional graphics offers a novel experience… All of it’s launch titles are excellent and more are coming. It’s high resolution LED display is top drawer. Its controller has a comfortable, intuitive feel. Its stereo sound is great.

Everything about Virtual Boy works, but to what end? “

It’s a common theme in reviews. An awful lot of praise, but wondering who exactly the console is for? Who still cared about VR? It was no longer the future of home entertainment. 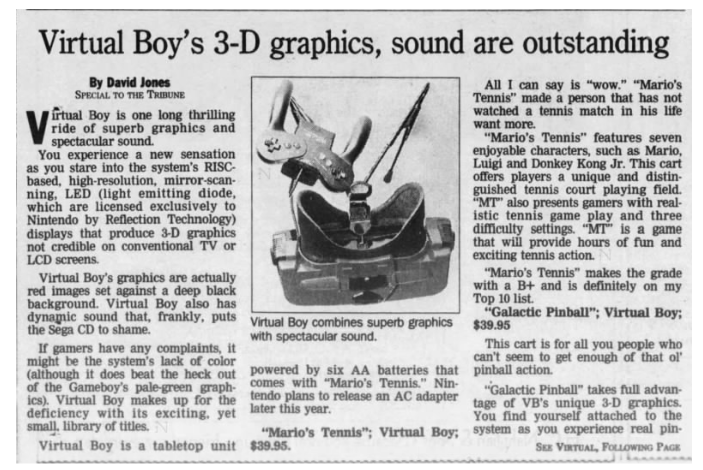 Praise for the games, for the immersion, for the overall package. What went wrong? Well, this reaction wasn’t universal. Many criticized the lack of portability, or that it was unsuitable for children. The New York Times explained the difference between a Virtual Boy and a Game Boy instead of actually discussing the console. This implies some confusion over who should buy one. The early pieces praising the technology achievement gave way to confusion over who would actually want to use the technology.

A Hard Core, High-Tech, in Your Face Experience

Nintendo Power continued selling the Virtual Boy as ground-breaking. It’s noticeable how much time they spend trying to describe the actual effects of playing. The issues around the release date plug a Blockbuster deal. Money off renting a Virtual Boy, to try before you buy. Competitions offered the chance to use a Virtual Boy. It is not framed around an ongoing ecosystem with continuing new releases.

It’s notable that Nintendo’s mouthpiece decided it was easier to suggest renting a Virtual Boy to show off the console. It must have been a better option than trying to convince anyone to take the plunge based on screenshots. This marketing problem comes back to the earlier issues that reviews highlighted. No one is really sure who it is for. Finding a market for the Virtual Boy seems to have been its biggest problem. When VR was all the rage and the future, it looked bright. However, on release things had changed.

Mario Tennis was identified as a system selling game. One that actually took advantage of the 3D system. major selling point. Wario Land also found an audience, with a review claiming it was the first game to make the system worth all the headaches.

The New York Times expressed very little interest in the system beyond as a tool for analyzing business. From this perspective, Nintendo were banking hard on Virtual Reality. These pieces often coincide with growing excitement or praise for the PlayStation. The bizarre Virtual Boy coincided with the emergence of Nintendo’s biggest competitor. For Nintendo, it was sink or swim with VR, while Sony dominated your TV set. 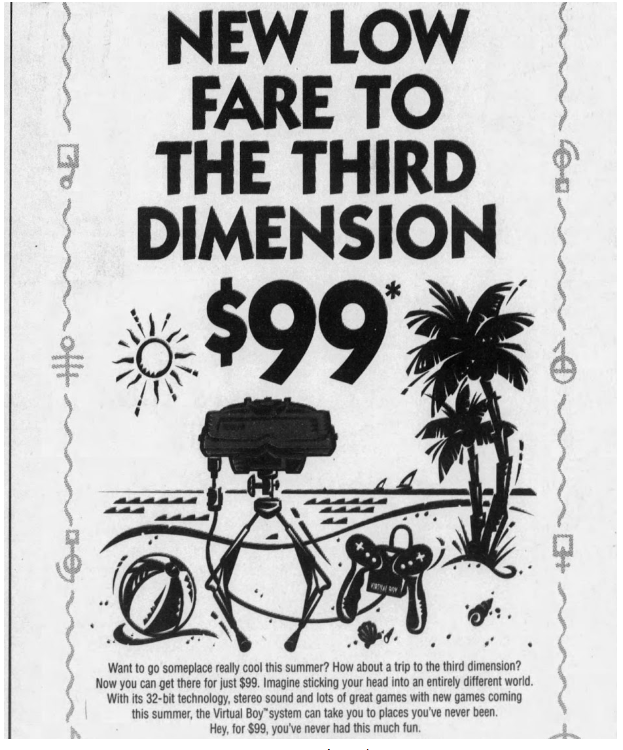 In the period following release, the Virtual Boy had price drop after price drop. Ads began focusing on it’s lower and lower price point. These ads dropped the playful confidence of the earlier pieces. Gone are the psychedelic appeals to the fun of VR, or the caveman suggesting opening up a whole new medium. Instead, there is a beach and a low price, an ad that seems almost exclusively geared toward getting curious adults on board.

Re-reading press responses, it seems VR in the early 90s was a passing fad. Unfortunately, it was one that had already passed by the time the Virtual Boy released. The initial wave of excitement was for the prospect of the machine; it could never sustain interest beyond this. VR was no longer a big deal in gaming tech.  After the unveiling in November 1994, the Virtual Boy was an impressive retail alternative to high-end devices that would be the future. By the time of launch, however, it was a novelty and VR was a passing fad. Interest had already waned in even the high-end VR machines, let alone Nintendo’s budget version.

The great reviews the majority of the games received are in contrast to this, the games were clearly worth writing about. It’s a shame that most are stuck in a dead format.