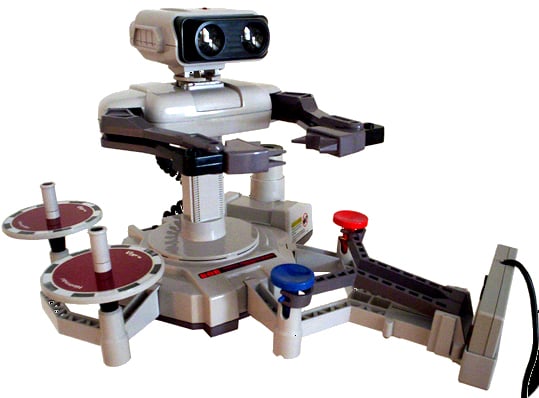 While many journalists were lucky enough to attend the GDC this week and get their hands on the latest virtual reality games, I traveled back in time and played one of the original NES launch titles, accompanied by R.O.B. a.k.a. the craziest video game controller ever made. Technically R.O.B. isn’t even a controller since the player must use the classic NES controller to make him move. Hell, he’s not even a robot but he takes the shape of one, and everyone loves robots, so we won’t hold that against him. As we are about to usher in the age of virtual reality, it’s crazy to think how Nintendo has always understood and recognized that video game entertainment doesn’t always have to be confined to a button-based handheld input controller. Consider the NES Zapper, the SuperScope, The Virtual Boy and even the Wii nunchucks, to name just a few. But while innovation is great and all, many of these gimmicks have done little in the way of making Nintendo increasingly popular. Most often it actually makes consumers angry that they spent their hard earned cash on yet another product that Nintendo either quickly abandoned or did little with. If amiibo feels like the latest cash grab/slap to the face for fans of the Big N, imagine how gamers must have felt back in the ’80s when they purchased the Robotic Operating Buddy, and Nintendo only released two games to go along with it. Let’s face it, R.O.B. was a Trojan horse. Knowing that they were entering a market that had just experienced a video game crash, Nintendo realized they needed to offer something different. They packaged the Nintendo Entertainment System with a light-gun and a robot, both of which offered new ways for the player to interact with their games, and disguised the whole package as a toy, and not a video game console. It was a stroke of marketing genius since parents who were unfamiliar with the industry or had a negative view of video games could justify a purchase of the NES because the R.O.B. bundle came with the robotic sidekick. The novelty of owning a robot was the extra push many customers needed to spend their hard-earned money, and that was R.O.B.’s reason to exist. Unfortunately, the infamous R.O.B. itself was met with poor reviews for moving too slow, and the fact that the gaming peripheral only worked with two games didn’t help. But here’s the thing – his two supported games, Gyromite and Stack-Up, are not only unique – but actually fun to play. Gyromite is the best of the two games and this side-scrolling platformer/puzzler is often overlooked and underappreciated. It stars Professor Hector and his assistant, Professor Vector, as players navigate the side-scrolling platform levels with the help of their creation, R.O.B. Their laboratory is threatened by man-eating bird-like creatures called Smicks, who rig the lab with dynamite during the late hours of the night. Thanks to Professor Hector’s sleep-walking tendencies, Vector is able to use R.O.B. to control where he moves by raising and lowering red and blue gates. The goal is to disarm all the dynamite sticks while avoiding running into the Smicks. However, the professor is limited in his movements. He can only walk, climb ropes and pick up turnips which he can use to distract the Smicks, who feed on it while he sneaks by them. It is all pretty straight-forward, but compared to the hundreds of puzzle games released each year, Gyromite still holds up well today – not to mention it comes with a robot to play with. How cool is that? Gyromite actually features two modes of play, Game A having 40 phases and Game B having 25, which then repeat with faster gameplay speed for added difficulty. Game B is somewhat different, as players must skillfully manipulate the blue and red columns in order to ensure the sleepwalking mad scientist can safely travel from the left side of the screen to the right while avoiding danger. The column-manipulation gameplay is an interesting twist and places a heavy emphasis on timing and patience, as much of the game is spent waiting to raise and lower barriers at the right time. Game A, however, is where players can really have fun since it allows for multi-player action – one player takes over for R.O.B. and the other controls the Professor. Not having a jump function makes the game challenging, and chances are your worst enemy will be the second player or a lack of communication between you both. The levels themselves seem fairly simple, but this is not an easy game to finish since you must rely on the help of your robotic buddy. R.O.B.’s movement is slow, and considering each stage also has a time limit, the game can be frustrating at times. The only true complaint I have about the game itself is that there can be times when you will get trapped with nowhere to go and have no choice but to either wait until the time runs out or reset the game and start all over again.

As puzzle platformers have matured, people are more likely to evaluate a game by the quality of its story and graphical presentation than by the ingenuity of its puzzles, and in this case, its accessories as well. Gyromite may not stand the test of time the same way a masterpiece like Tetris will, but I do believe it is one of the best games released on the Nintendo Entertainment System and is criminally underrated. The graphics aren’t anything to write home about, but it still looks better than many other games released for the system, and the lighthearted soundtrack and old-school sound effects are actually pretty good. If you enjoy puzzle platformers and classics games from the 8-bit era, give it a shot. Although good luck finding a complete, working R.O.B. to play Gyromite, let alone a CRT television to bounce light signals off of.

R.O.B. was clearly a gimmick that Nintendo used to push sales of the Nintendo Entertainment System, but despite all its flaws, R.O.B. is just another example of Nintendo willing to take the home video gaming experience into uncharted directions. Much like how Nintendo experimented with connecting players to an online system before the days of the internet and like they experimented with virtual reality in the mid ’90s, Nintendo’s consistent thrive for evolution has put them a step ahead of the competition. R.O.B. was the NES poster boy for only a year, but he accomplished his mission – helping Nintendo sell over one million systems of the NES and putting the company at the top of the video game industry. History repeats itself, and while the Virtual Boy was an absolute bonafide disaster, it hasn’t stopped others from following suit decades later. Perhaps one day we will see another robotic operating buddy, and maybe next time they’ll get it right. Regardless, R.O.B. will always have the bragging rights to say he was the first.