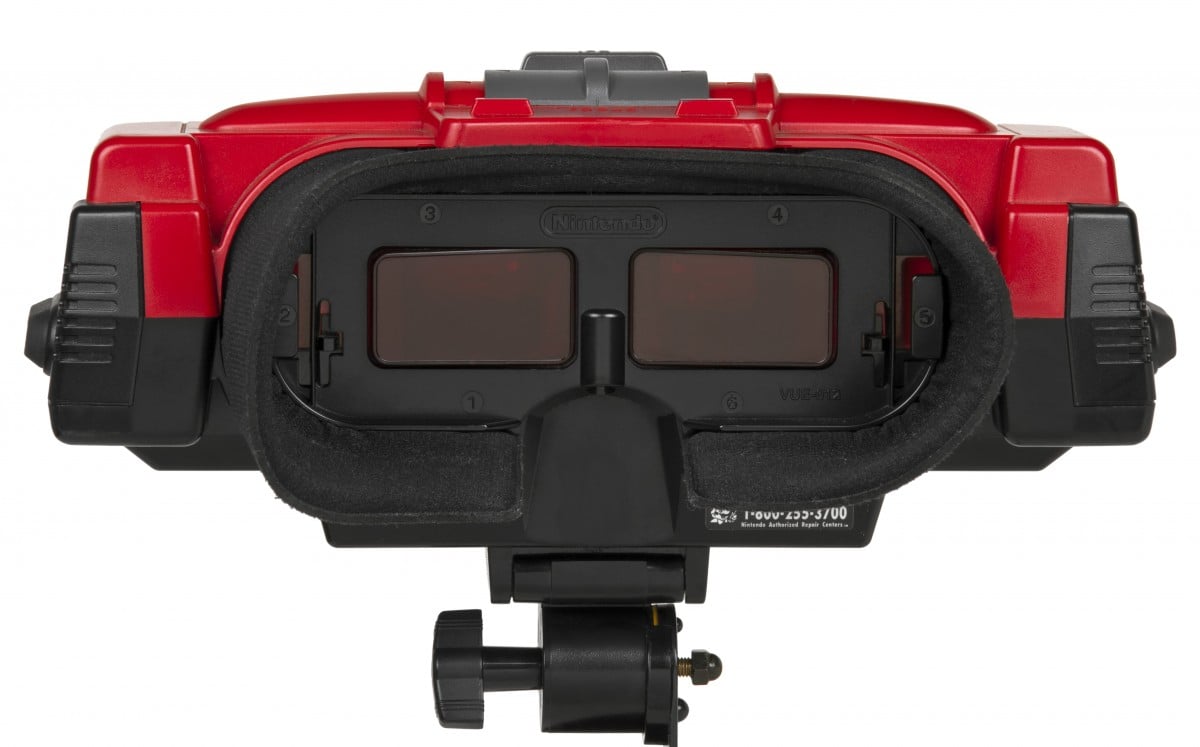 Those who fail to learn from history are doomed to repeat it, and because of this, despite the media hype surrounding virtual reality’s big push into gaming that will supposedly happen this year with the arrival of Oculus Rift, Playstation VR, and HTC Vive, Nintendo will most likely stay out of this emerging tech space, and with good reason. They’ve been there, done that, and for anyone believing that VR is somehow the future of gaming, I have two words for you: Virtual Boy.

Sure, the tech has grown and become incredibly more sophisticated, but no matter how powerful the processing power is, no matter how neat the engineering, it can’t compensate for a bad idea. VR may seem cool to those who have limited-to-no experience with it, but as one of the very few in the world who actually bought Nintendo’s doomed 3D headset console the day it released back in good ol’ 1995, I would caution players from getting too excited about the magic beans these companies are selling. Playing Virtual Boy taught me and Nintendo (I assume) some important lessons about gaming in general, and while VR has been the talk of the town for the last couple of years, there are a few reasons I believe its fifteen minutes will soon be up. 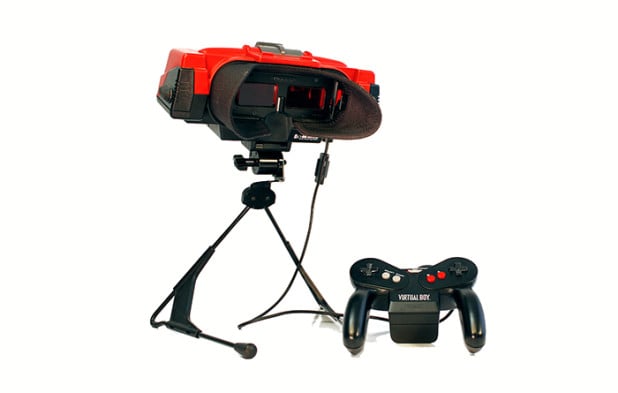 How people game is an important element when discussing VR. While countless innovations and advancements have been made over the decades, gaming has essentially stayed the same: a person looks at a flat screen and uses input devices to play. Though some variations have existed, like the motion control of the wiimote, Playstation Move, or Kinect, the popularity and interest surrounding these was based more on novelty than need, and these “game changers” have since faded from wishlists, all but left behind by console makers. Another such variation was the Virtual Boy, which used lasers reflected off oscillating mirrors to create the illusion of depth through parallax. Let me tell you first hand that it worked well and looked very cool, but what was the gaming advantage of 3D? Nothing I played really made a case (sound familiar, 3DS?), and no longer masked by the strangeness of Virtual Boy’s biggest feature, the flaws, and inconveniences of the system became more apparent.

Because of the bulk, there was no comfortable way to sit down and relax with Virtual Boy. The best options were hunching over at a table and dealing with a stiff neck, or laying on your stomach and dealing with an un-vacuumed floor. Regardless, you couldn’t do either for too long without eye strain, which could lead to queasiness, being a serious concern. With a loyal SNES loaded with gaming classics accessible from the comfort of the living room couch, and the N64, which wouldn’t shoot lasers into my eyes, looming on the horizon, reasons for playing the Virtual Boy began to become less convincing. As far as modern VR goes, how long will people get enjoyment out of clearing their rooms so that they won’t bump into anything, walking and waving their arms around, turning their heads, looking like that kid on the cover of Time Magazine? I still read complaints about wiimote waggling, begging Nintendo to return to a traditional controller so that they can relax to the next Zelda game, and somehow VR is the future? Hmm. 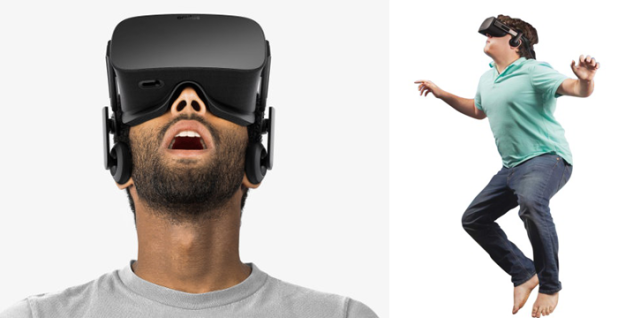 I’m betting this isn’t how people want to look doing anything.

Nintendo has also long emphasized that they make games for the living room, for families and friends to enjoy together, and I think they are right to do so. Yes, solo gaming is a great way to unwind, but the social component has been present since the first annoying friend or brother started backseat platforming. Couch co-op and trash talking the competition next to you are some of the best reasons to play video games, but VR will completely lack that option. Playing Virtual Boy was a solitary experience (unless you happened to know someone else who owned one, almost a mathematical impossibility). The only way to show someone how cool something looked or played meant switching places so they could look. We could never be seeing the same thing at the same time, never sharing a moment, whether the elation of victory or the agony of defeat. With eyes and ears covered by a headset, shutting the player off to the world, this idea of solo play isn’t exactly in line with Nintendo’s social philosophy, no matter how many online features it supports, and it limits the market in general. So at what point will the new VR headsets become the overall nuisance they surely are destined to be?

3D TVs might be a good indicator of the shelf life of these types of innovations. Turns out that even wearing those silly little glasses is enough to cause buyers to look the other way. But wait- obviously after the success of Avatar, 3D movies are now the standard in theaters, right? Just like James Cameron and everyone else predicted back in 2010, the peak of 3D hype? Flash forward a few years, and despite releasing the highest number of films in 3D (47), 2014 saw the lowest percentage of 3D revenue. I guess that explains the decreasing amount of those surcharged showtimes these days. The bright flame of interest has burned out, and most people have gone back to the tried and true. Perhaps what isn’t broken didn’t need fixing in the first place. The process of watching a film at a theater has remained relatively unchanged for over one hundred years for good reason, and maybe the system delivering video games as a medium doesn’t need to evolve either; just the games developers create. Wearing goggles or a headset to see something different is neat once or twice, maybe even cool enough to become a fad, but it doesn’t fix a bad movie, and unless it addresses a fundamental flaw or something lacking from the original experience these things tend to waft away like Smell-O-Vision. Just ask the Virtual Boy. 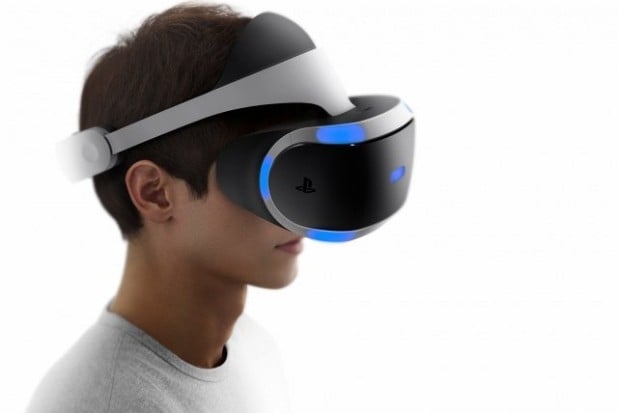 Tech wasn’t the failure of Nintendo’s little experimental system; misreading the audience was. Just like people amazingly preferring to walk over using a Segway, gamers already have a pretty good system in place for how they play. Virtual Boy was neat, but not the gaming experience that people wanted, and I’m willing to bet that it still isn’t, even all dressed up in prettier clothes. VR wants to change the way people play games, to force innovation on a medium that is currently only experiencing increasing success. There’s nothing wrong with pushing a medium forward, but the move to Virtual Reality feels more sideways, done simply because it can be. While the gaming world prepares for the onslaught by the supposed future of gaming with the long-awaited releases of the many VR systems that are currently in development, Nintendo is quietly readying the launch of its next machine, codenamed NX. Will VR be a component? Most likely not, and for Nintendo’s sake, that’s a good thing.

For more on my experiences with Virtual Boy, check out this episode of the NXpress Podcast