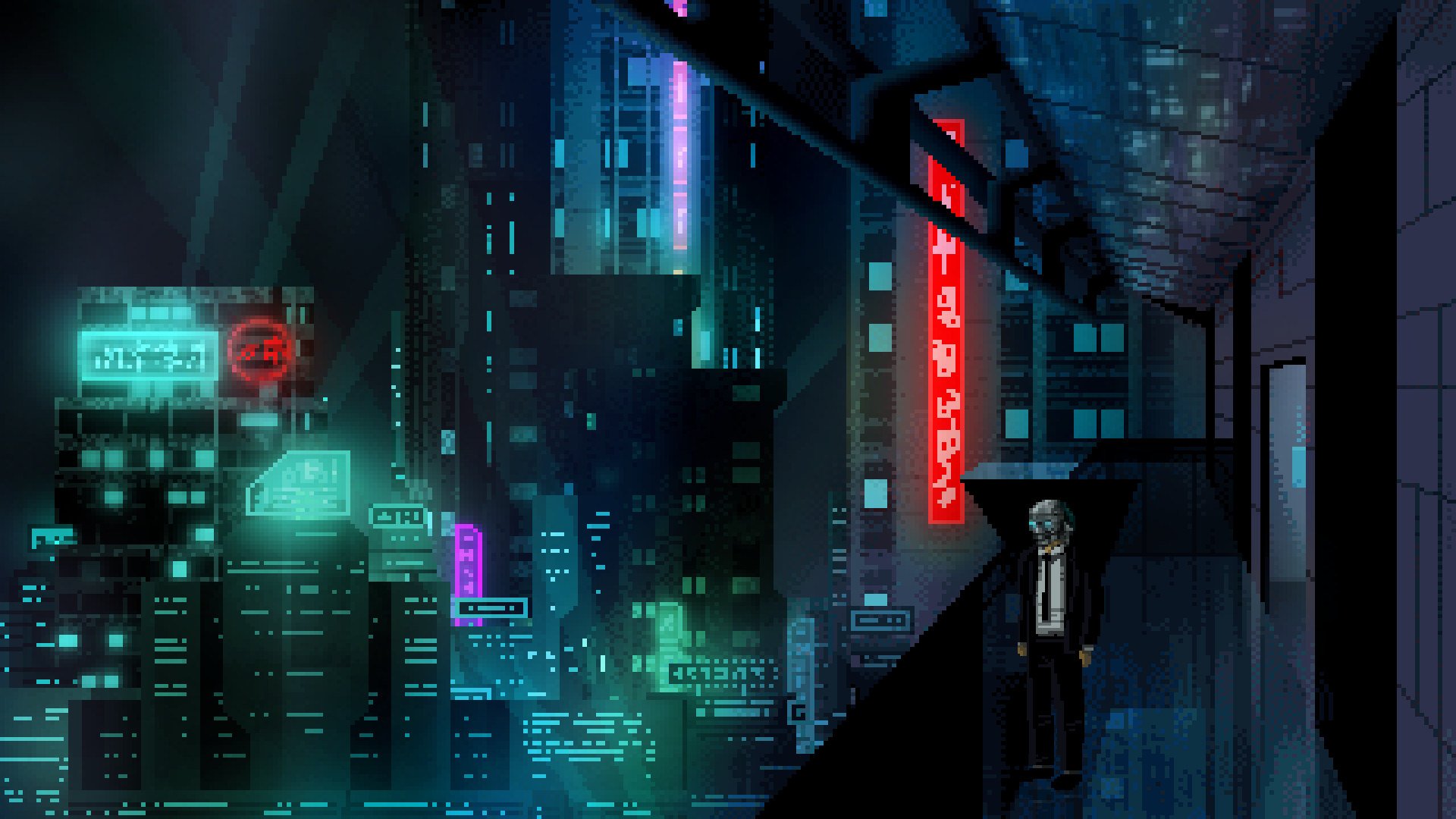 Sometimes games do things you don’t expect. Sometimes they have a great combination of ideas that surprise and delight, that fit together in a way that makes a game more than the sum of its parts. Until I Have You combines a host of good ideas in an interesting package with a lot going for it, and does indeed surprise. But how many of those surprises are successful?

Until I Have You is a side-scrolling action platformer at its most basic level, but it aspires to quite a bit more. It sports a cool cyberpunk aesthetic highly reminiscent of Blade Runner, done in attractive and detailed pixel-art style with some great music, and tells an intriguing story of a man with a mysterious past, of figures that emerge from that past as adversaries, and of his relationship with his missing wife. It’s not an entirely coherent chain of events, but that seems to be largely by design, and while it takes a bit to truly get going, it’s a fairly compelling narrative.

The story unfolds via cutscenes, holographic videos, and TV news reports that pop up as chapters are completed, and each chapter consists of several levels that must be finished in sequence. Running and jumping take up the largest consideration, and movement is ultra-quick. The player can attack enemies using both ranged and melee weapons, and the enemies can do the same. Player death from the environment or enemy attack results in an instant restart of the level (think Super Meat Boy), and learning to manage speed is an inherent part of the experience. Storytelling is one of the game’s highlights.

While this is a compelling part of the gameplay, it’s also one area where the game has a tendency to fray at the edges. Parts of the game almost feel designed to be a more puzzle-oriented version of an endless runner, and when the game is at its best, this is what it feels like. But it makes an admirable effort to keep things from getting stale by constantly shaking up the formula, adding new twists to the existing gameplay, and while this is sometimes a great thing, it also sometimes causes the experience to stumble. If these new elements were introduced somewhat less frequently, allowing for a slightly longer sequence of levels to focus on one wrinkle at a time, the experience might gel a little more consistently.

That, and not every new element ends up being valuable. While they all contribute to mixing things up, some of them aren’t especially fun, or don’t work as well with the game’s basic formula. Sometimes it’s actually hard to tell if mechanics are working as intended, too. One stretch of levels introduces exploding enemies that drop from the ceiling, and this causes the game’s speed to grind to a halt as one tiptoes forward to safely drop them. However, it seems that rapidly firing certain weapons will keep them glued to the ceiling, but it doesn’t drop any hints about it and performing the action feels really inconsistent, leaving one to wonder whether this is a design element or a bug. But a lot of the elements are cool in their own right. There are levels where the player has to memorize a series of jumps and manage their speed to keep from falling, where they have to avoid timed sequences of environmental traps, and where they focus almost exclusively on chasing someone, breaking and leaping through windows as they go. A sanity meter is introduced that causes the main character to slowly hallucinate as he commits more acts of violence, and it’s used in clever ways on several occasions. There’s a time-slowing mechanic that can make tricky jumping or combat sequences a bit easier, and a dash ability that allows for jumping across greater distances or gliding through otherwise-impassable walls. Every chapter ends with a boss fight, and these often make good use of the various abilities.

Ultimately, when Until I Have You is firing on all cylinders, using these things to their full advantage and not getting in its own way, it feels satisfying and fun despite some of its smaller problems. The interface isn’t great, animations are often clunky despite the great artwork, the engine sometimes stutters during loads or causes the player character to spawn at inconsistent movement speeds, and while the voice acting and writing generally feel pretty solid, they falter just often enough to be noticeable. These things are easy to overlook when the game is at its best, but are more grating when larger issues with mechanics or pacing drag the experience down. Not every idea works as well as it should, and the whole isn’t always cohesive.

Until I Have You is still an interesting game with a lot going for it. While it isn’t always more than the sum of its parts, that sum can be—in moments—quite substantial. It’s clearly a labor of love, and the developer has been listening to feedback since the game’s release, having already added things like checkpoints and difficulty levels to make life easier for players that found the challenge a little too stiff initially. It’s a shame that Until I Have You doesn’t quite manage to live up to its full potential, but it never goes stale, and it offers a sizable chunk of content to anyone who connects with its dismal world, grim story, and audiovisual polish.

‘Kirby: Planet Robobot’ – Annihilation Has Never Been So Cute