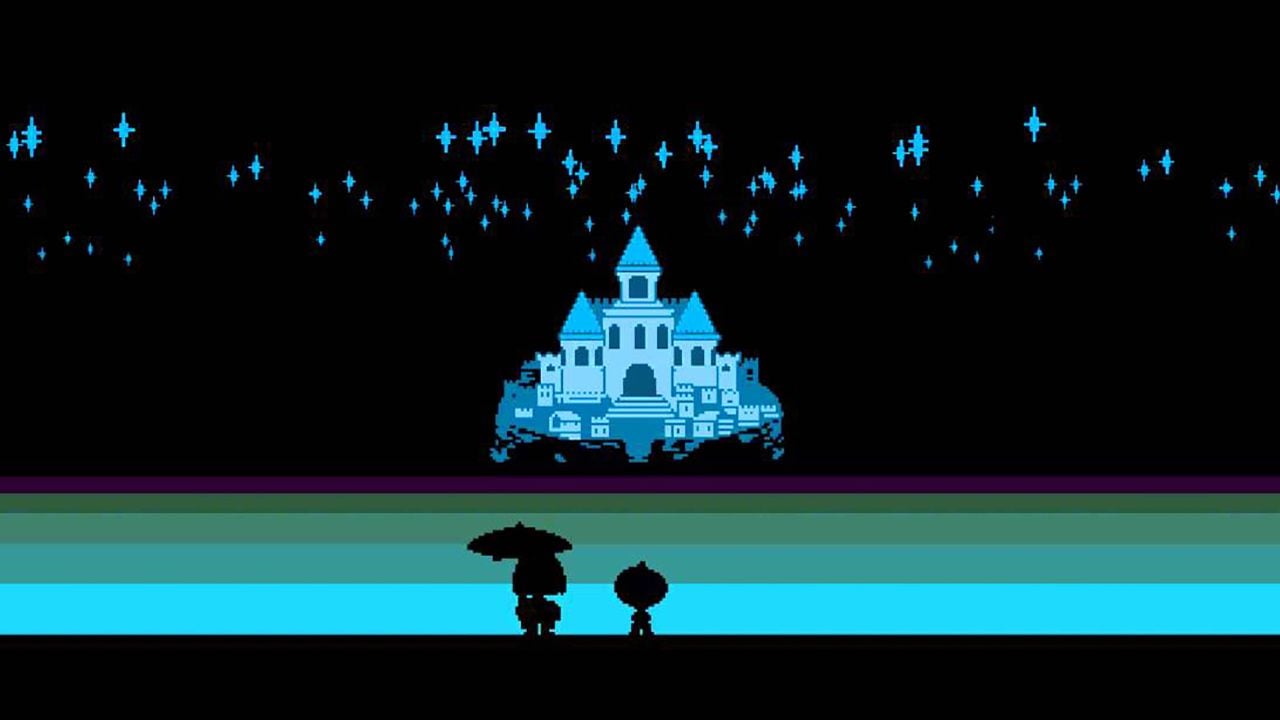 Undertale made an impression on not only the indie scene but the entire video game world when it released last month. The result of a wildly successful campaign through Kickstarter which began two years ago, this revisionist take on the classic RPG was said to blend elements of Earthbound, Shin Megami Tensei  and Touhou into an entirely originally package. The effort of over 2,000 backers and the mind of Toby Fox helped create one of the most unique and charming releases this year.

The game tells the story of a young human child who falls through a hole while climbing up the legendary Mt. Ebott and enters the underground which is a strange new world home to monsters. The child then finds that he/she must fight or befriend their way through the underground to find King Asgore in hopes of making it back to the surface. It’s a simplistic premise but through characterization and dialogue, Undertalebecomes an endearing narrative about hope and determination.

An aspect of Undertale that seems to overtake its reputation is its humor. The game is drenched in it with almost every line of text cleverly embedded with a joke or subtle commentary. Each character is either introduced as a comedic character, most notably exhibited by the boney brothers, Sans and Papyrus, or has their funny bones tucked away under self-loathing angst against the child or frustration over their situation. Almost everything in Undertale attempts to be funny and while the humor hits its mark most of the time, sometimes it can seem overdone. Fortunately, the humor is balanced out with its warm use of dialogue to summon an emotional facet to the tale.

The story is very much character-driven as each member of the cast isn’t just a standalone joke-telling machine. Most characters are multidimensional and have something at stake in regards to the child’s adventure. How you treat the monsters also determines their character and how things will play out in the game. Some might hate you. Some might love you. Some might do whatever they can to stop you while others will do everything in their power to help you. Amidst its sometimes overwhelming humor, Undertaleis surprisingly full of heart and can easily make the players fall in love with the monsters during their time in the underground.

Undertale as a whole is an experience-driven game, so much so that it isn’t afraid to sacrifice gameplay to drive key points of the story home to the player. The game is an RPG, taking many cues from Earthboundin aesthetics but using a vastly different scheme in terms of game mechanics. Puzzles are abundant in both exploration and combat. There are two ways to win battles, to kill the monsters or to find a unique way to make the monster forget about fighting, thus allowing the child to take mercy on them.

Killing enemies is not satisfying in the least and it is actually the easy way out when it comes to combat. Killing monsters and bosses ensures that you will receive EXP and gain levels but you will never see those monsters again, meaning you lose out on certain scenes of the story. Not to mention attacking only consists of a few consecutively timed button presses. Taking pity on the monsters and taking the mercy route is far more rewarding and requires much more thought. For instance, the enemy Ice Cap wears a shiny and pointy hat of ice that is twice the size of him. Selecting ACT and choosing to “ignore” him turns the child’s gaze away from his hat and deprives the monster from the attention it so desperately needs. After a few rounds, the enemy will forfeit the fight. Each monster has a unique way to inflict MERCY on it and it’s up to the player to take in clues represented by the enemy sprite and its dialogue in order to win the battle. It serves as a much more captivating method to the game than simply pummeling the monsters to death. 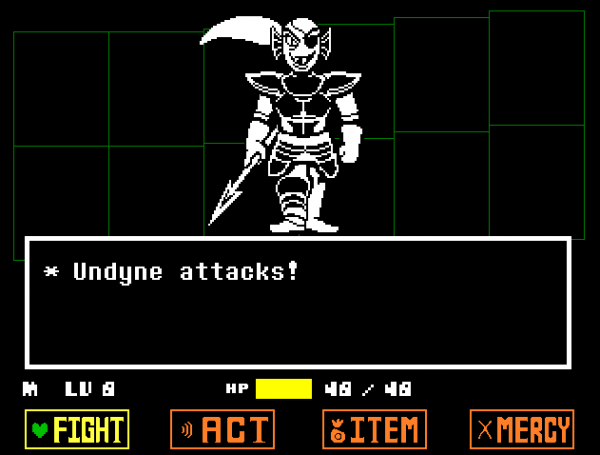 Depending on whether the player decides to spare or kill the monsters changes the outcome of the game, opening up different options in the story as well as encounters. While choosing to fight might just be a simple QTE session, discovering the outcomes of player choice makes it worth while to kill to your hearts content

Amidst attempting to stab a monster or figure out their gimmick, the player must also avoid attacks.  Every time a monster attacks, the child’s heart is placed into a sort of quick-time event style arena where the player must control it with the arrow keys in order to avoid whatever the enemy throws at them. There are so many different features to each enemy’s attack that combat never becomes stale. You might be dodging bullets, shooting mines, evading a man-eating spider or even answering essay questions during these instances. Even fighting the same enemy, you might come across an attack you’ve never seen because you picked a certain ACT action. It’s a much more participatory approach to combat which differentiates itself from the turn-based JRPGs of the past, including Earthbound.

The game is obsessed with giving the player a satisfying narrative, rather than a complete gameplay experience, by taking control away from the player at times or having it be impossible to lose during boss battles. There were interesting puzzles introduced to the player with intricate details that are abandoned for the sake of a one-off joke. While the jokes are certainly worth the careening of the game mechanics and puzzles, it would have been more satisfying to be able to test out the puzzles at a later time.

Each playthrough of Undertale will last about six to eight hours but there are plenty of different scenarios and routes to keep the player interested in completing the game even more. Undertale is one of the most unique and heartwarming experiences offered in quite some time. The charm in both story and combat is something that really begs to be experienced, especially for fans of Earthbound.