If you read my review of Total War: Warhammer 2 then you’ll know that its expertly crafted combination of two beloved gaming franchises is an act of unification that even Sigmar himself would have been proud of. But even with four new races to choose from and an entirely original campaign there was definitely something lacking in the release version of the game. Something that, the absence of which, may have resulted in me being a little harsh in my perspective on the game with regards to content and my final rating. That something was the Mortal Empires grand campaign; a post-launch addition to the title which utilizes all the content from the first Total War: Warhammer as well its sequel to build a sandbox strategy experience that opens up the vast majority of the Warhammer world for conquest. Bigger isn’t always better, but when it comes to strategy games increased map size is always welcome. Expanding the map to include the vast majority, but not all, of the regions and settlements from both games takes what was an already impressively intricate simulation of conflict within one of the darkest and grimmest fantasy intellectual properties ever devised, and makes it one of the deepest and most engaging strategy titles that Creative Assembly have ever produced. 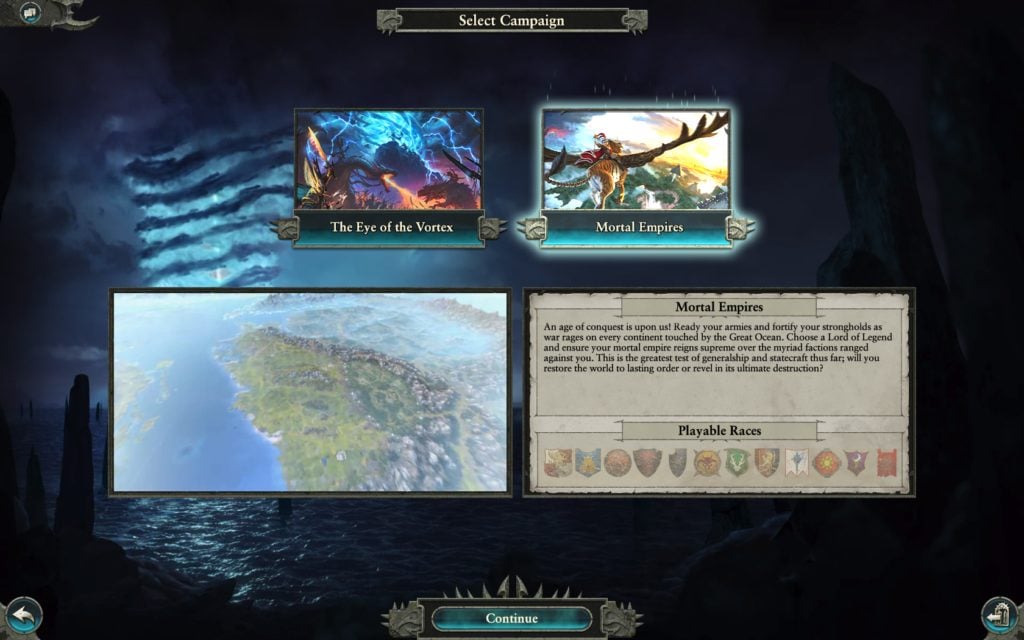 This being a content update more than anything else, the core gameplay remains largely unchanged with the exception of some minor alterations made to the starting units of various legendary lords and a couple of balance tweaks. Not that the game really needed many changes. As it stands Total War: Warhammer 2 is already one of the most feature complete strategy games released in recent years, and with this update it becomes an even more appealing addition to any gamer’s already voluminous Steam library. The battles are just as good as ever, maybe even a little better in fact seeing as now it’s possible to watch the stalwart men of the Empire clash with the relentlessly fiendish Skaven or witness your slathering swarms of Chaos minions assault the glistening shores of Ulthuan. Each engagement still allows players to focus on the brute force tactics of an infantry mass but definitely doesn’t discourage the application of more subtle magically inclined approaches to warfare. The breath attacks that made some of the new factions so deadly, the Dark Elves and Skaven in particular, have been carried over to the older races as well which means they’re not entirely outmatched by newer additions when it comes to arcane firepower. 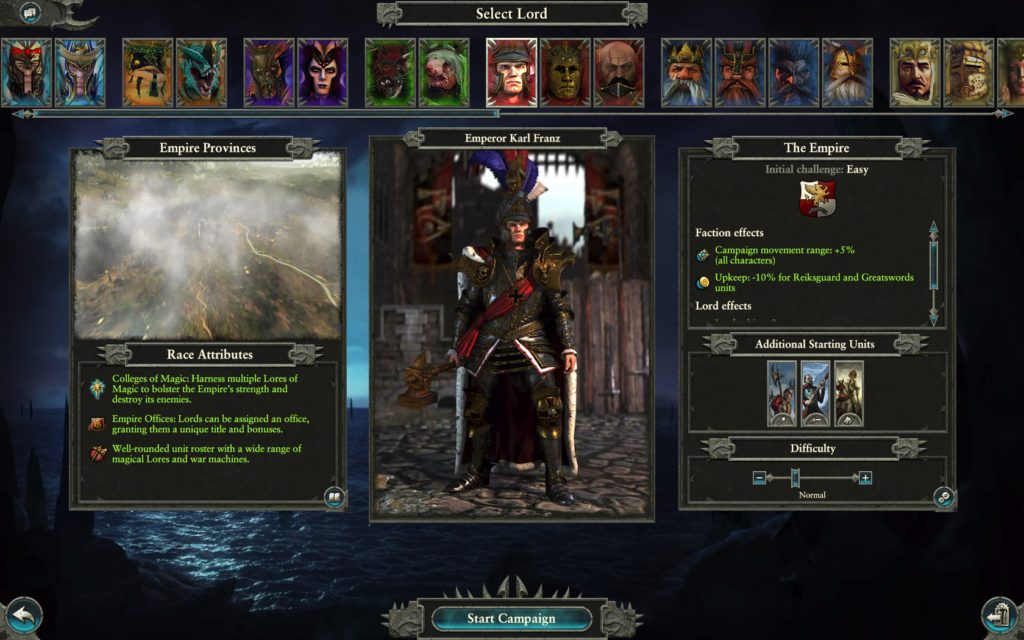 However, opting to play as the new races does give you access to their rites from the Vortex campaign which provide minor but significant advantages, from public order bonuses to recruiting discounts, over the factions from the original game. It would have been interesting to see what Creative Assembly could have come up with if they’d decided to expand this new mechanic to the older races. Not only would it have promoted better overall balance but it would also have added some extra flavor to the previous factions. One mechanic that has been carried over to all available factions is the settlement suitability system. Players of the original factions are no longer bound by the restrictions placed upon them before, where the game arbitrarily decided that only certain races could occupy particular territories. Although it made a certain amount of sense that Greenskins couldn’t occupy Empire provinces, such restrictions had the effect of limiting free form expansion which may have been lore appropriate but ultimately took a huge amount of fun out of what should have been a no limits campaign. Being the unchallenged ruler of the world is part and parcel of the long game victory conditions and whilst it’s perfectly possible for players to conquer every settlement, it wouldn’t generally be advisable. Occupying inhospitable regions comes at a significant economic penalty that can quickly become crippling. Careful attention to economic and population development is actually quite important in the Mortal Empires campaign, as even though you can still amass vast amounts of wealth and gather together mighty warhosts, not keeping the negative impact of unsuitable settlements to a minimum can devastate your treasury and put players at a disadvantage when compared to their multitude of rivals. 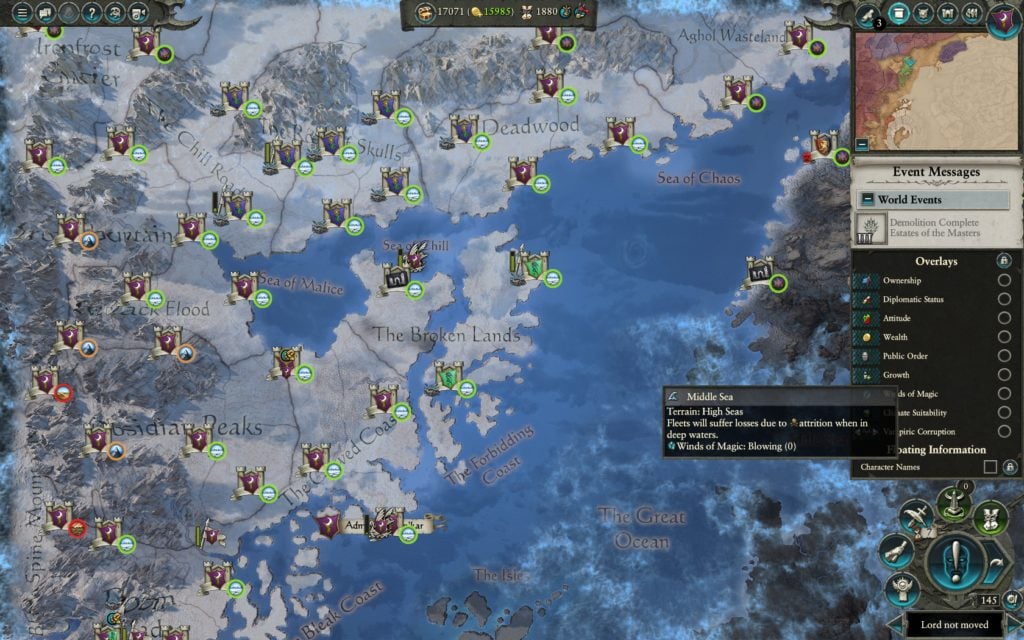 There are 117 total factions, all of which are looking to carve out their own share of close to three-hundred settlements spread across a map that stretches from the tainted wastelands of Norsca in the far north to the jungle realms of Lustria in the south west. In between are all manner of unique locations that offer local buffs to specific resources or unit types to tantalize you into bringing them into the fold one way or another. With so many factions vying for total dominance over both the old world and the new, there’s no denying that end-turn phases are a little longer than is ideal, especially once you take into consideration the movements of various rogue/rebel armies and minor factions. Beyond that little gripe though, the inclusion of so many different armies adds a surprising amount of variety to a campaign. As divisions and alliances form across continents and oceans the campaign becomes a sweeping drama of rivalry and revenge, which sees former allies turn against each other in squabbles over how to divide newly acquired provinces and has old enemies unexpectedly unite to crush foes previously beyond their means to defeat. Most of my time with Mortal Empires has so far been spent playing as Malekith, the spiteful yet surprisingly dignified master of the Dark Elves. 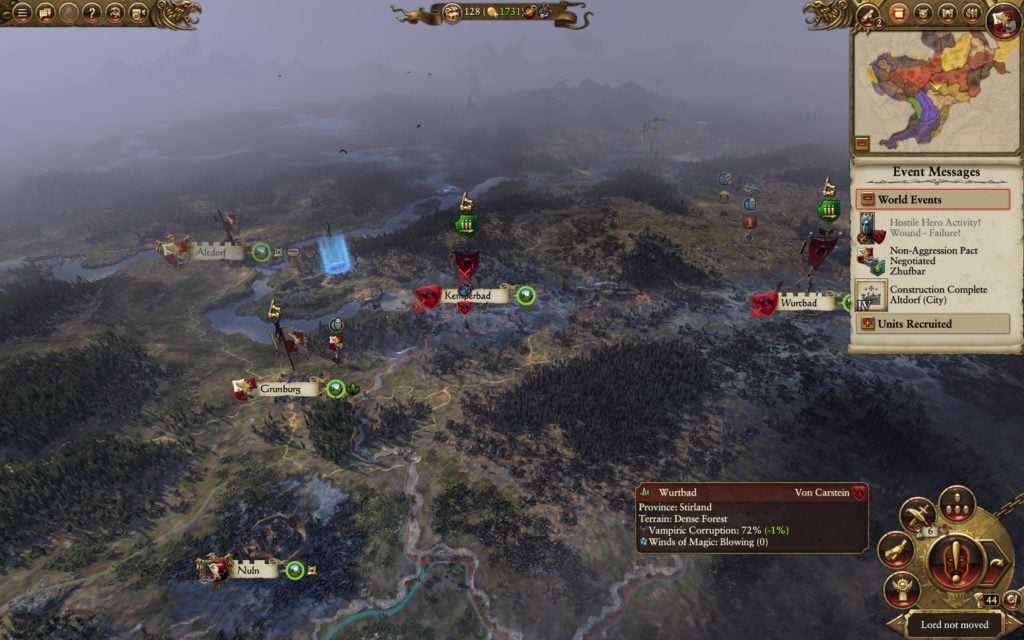 I’ve lost count of the number of times I’ve been betrayed by trusted allies and unwittingly saved from severe losses by sworn enemies who happened to eliminate troublesome roaming armies at just the right moment. At one point I found myself in a desperate race south to help Morathi (the other Dark Elf legendary lord) in her war against Mazdamundi and his reptilian cohorts before the armies of Ulthuan could reach the southern-most shores of Naggaroth and raze her capital, the Ancient City of Quintex, to the ground. Between us stood a vast swathe of peninsula that had been conquered and corrupted by a rogue Vampire Count army, The Scourge of Aquitaine. With no other option but to launch an all out assault on the undead mercenaries I invaded their provinces. One by one their armies crumbled, their cities fell to relentless sieges and their leader was slain forever on the very edge of the world on the borders of the Red Desert. There’s a surprising amount of role playing that goes into these kind of long form games and since Mortal Empires‘ campaigns can easily run into multiple hundreds of turns you’ll have more than enough time to forge your own personal legend. With still so much of the world to bring under my sway, I begin each play session with gleeful anticipation of who and what awaits me beyond the fog of war. 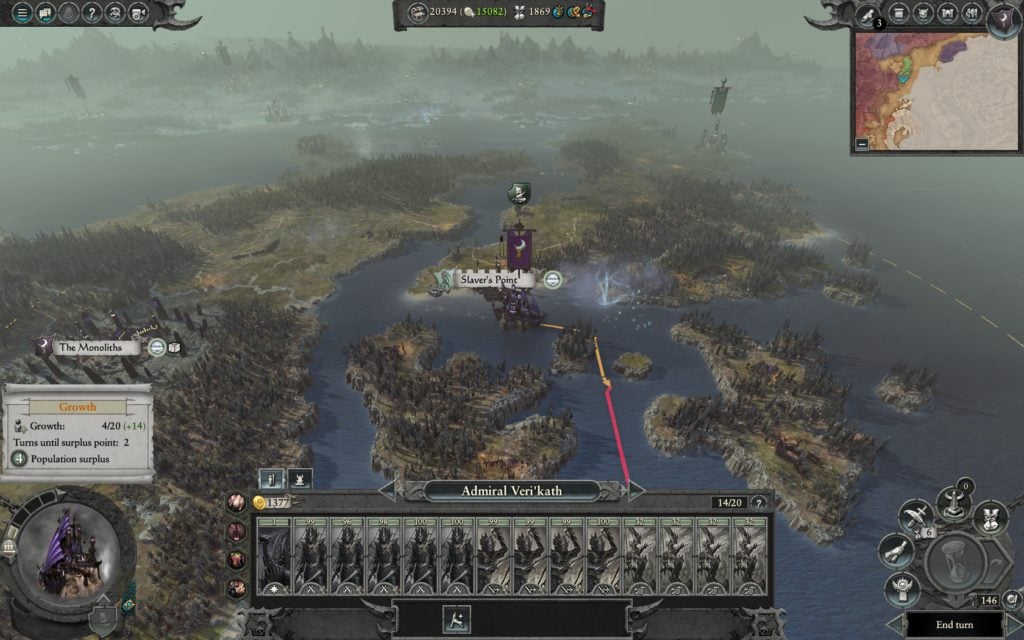 Improved gameplay opportunities aside, probably the best thing about this update is that it is completely free with nary a loot box in sight. That may seem completely unbelievable (in an age where micro-transactions are running rampant across the gaming landscape like a horde of avaricious barbarians and it’s even possible to pre-order currency for games that haven’t even hit the market yet), but it’s actually true. If you own Total War: Warhammer and Total War: Warhammer 2 then this mode will be available to you immediately upon starting a new game which significantly improves it in terms of value for money and as fans of series can attest an enormous amount of game time. If Creative Assembly stick to the model they used for the first game then there will be additional paid faction content released over the next year, which will add even more options to a game already stuffed to bursting like a Nurgling-infested corpse. I for one can’t wait to see what new ways to destroy or save the world the developers have in store for us going forward to the launch of Total War: Warhammer 3. If you’ve not already purchased either available parts of the trilogy yet then I strongly recommend that you do as Mortal Empires makes this a game with so much to offer that it might just be one more reason to wish for immortality.