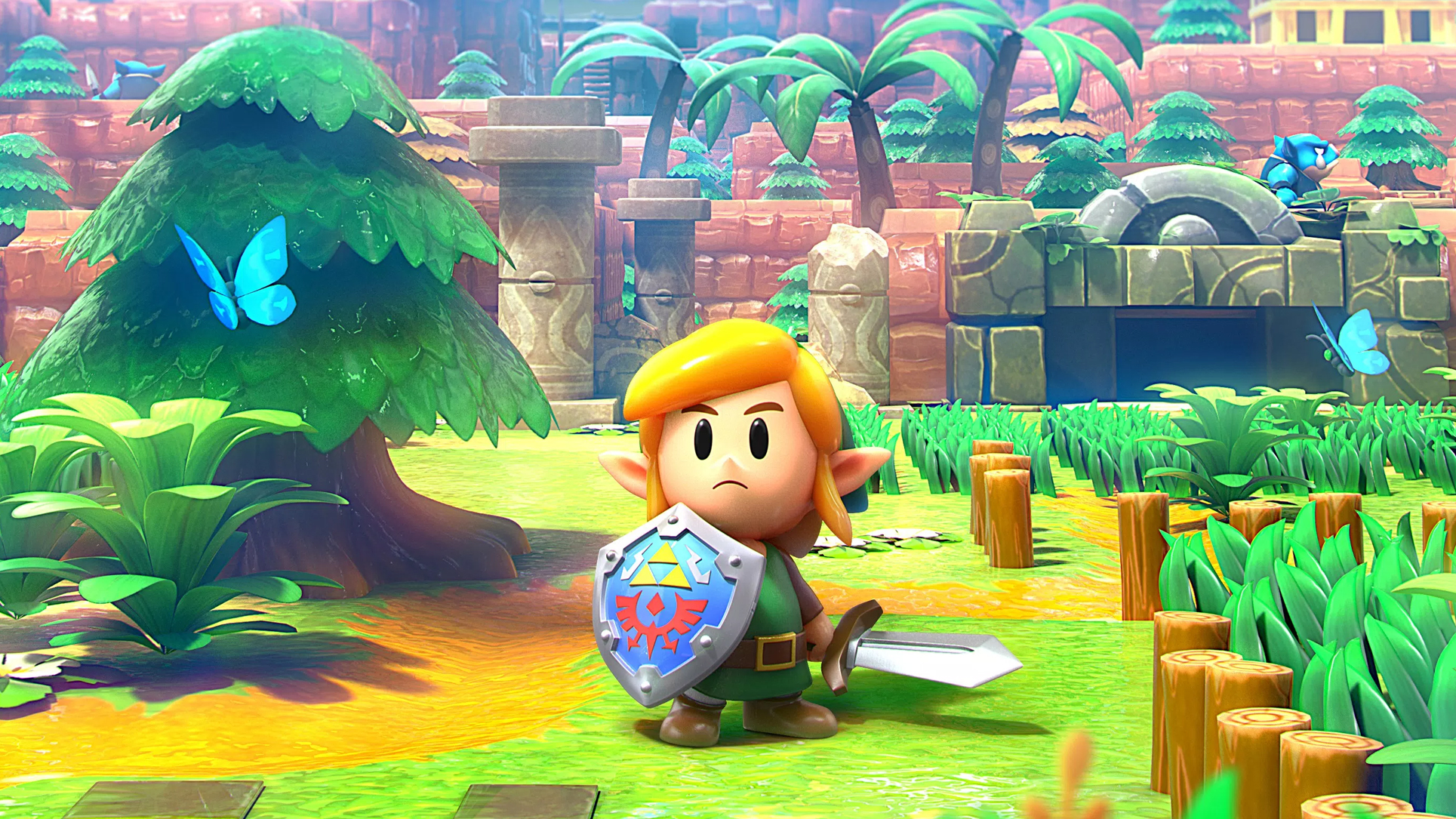 The Legend of Zelda: Link’s Awakening (2019) is a good remake. Although quite a few of its minor changes aren’t necessarily for the better, the remake clearly holds a considerable amount of respect for the 1993 original. Beyond just idealizing Link’s Awakening as it was and romanticizing itself, the remake shows an incredible amount of restraint. No major changes have been made to the pacing or the story’s scope. Link’s Awakening (2019) is a 1:1 remake as far as presentation is concerned, reinterpreting The Legend of Zelda as it was in 1993 for a modern audience– yet while it has an evident love and respect for Link’s Awakening (1993), it’s releasing under a much different context.

Zelda between 1986 and 1993 was a three-part epic chronicling the rise and fall of Ganon– starting with his death, before moving onto his failed resurrection, and flashing back in time to his rise to power. Nintendo has since shuffled around the timeline, but the first three games managed to tell a cohesive, comprehensible story. Logically, that’s the stopping point for any narrative arc involving Ganon; but that’s not how things worked for video games, especially not in 1993.

In spite of the Bowsers, Dr. Wilys, and Dr. Robotniks of the world, the fourth Zelda took a step back and indulged in a clean slate before Ocarina of Time would recontextualize the franchise’s origins in 1998. In an age where Ganon was dead and the Master Sword was just a sword, Link’s Awakening put an intimate, isolated spin on The Legend of Zelda. That’s not quite the case in 2019. The franchise has since established a very tight identity, to the point where Nintendo actually felt confident enough publicly releasing its internal timeline for the series.

For all intents and purposes, it seems Nintendo is intent on keeping the franchise’s image cohesive, comprehensible, and consistent for those paying attention. At the same time, this adoption of priorities also means that the series often indulges in its own iconography. In a post-Ocarina of Time world, Nintendo also doesn’t want to stray too far from what audiences perceive and understand as “Zelda.” The Master Sword, Death Mountain, the tunic. Different games experiment with the series’ icons in different ways– Breath of the Wild being the best modern example– but there’s been overuse of certain Zelda staples for a while, and the worst offender has been the Hylian Shield.

The Master Sword was just another sword in A Link to the Past, but its presence had narrative weight and scope. A Link to the Past doesn’t have much of an overt story, but much of what it does have revolves around the Master Sword. It’s just another sword in the sense that it’s one of many important swords, but it’s not devoid of meaning. The Hylian Shield, however, really is just another shield. Like any basic shield in The Legend of Zelda, it exists to fill a basic void. Majora’s Mask doesn’t even bring it back, more or less signifying that Nintendo never intended the Hylian Shield to be more than just Link’s second shield.

Flash forward to 2006. The most self-indulgent Zelda game to date, Twilight Princess relishes and does indeed thrive off of aping Ocarina of Time so much, but it also marked Nintendo taking the series’ continuity to the next level, so to speak. The Legend of Zelda was 20 years old by 2006, and with Twilight Princess the 13th game in the franchise, it only made sense to start referencing other games down to the minutia. Bringing back the Hylian Shield is one of Twilight Princess’ small ways of explicitly connecting itself to Ocarina of Time.

The Hylian Shield would make its next reappearance in 2011, and it’s here where its inclusion starts to toe a line. Basically, Ocarina of Time 2, it made sense for Twilight Princess to reference even the little things. That it coincided with the series’ 20th anniversary only makes that connection more appropriate in hindsight. As the (seemingly definitive this time) origin story for the franchise, it likewise makes sense for Skyward Sword to heavily reference the series’ most important titles, but where Twilight Princess romanticizes, Skyward Sword mythologizes.

It had appeared so often that it went from a minor thread connecting entries together, and became akin to what the Fire Flower is to Mario: a recognizable part of the brand. This is not inherently a bad thing, but in the case of the Hylian Shield, it makes it less special and less noteworthy. It doesn’t mean much when the Hylian Shield appears anymore. In the case of Link’s Awakening (2019), however, it’s plain distracting. Not because its presence is offensive in and of itself– it isn’t– but because it shines a spotlight on where Nintendo’s priorities were with the remake.

Despite how much love has been poured into the game, despite how faithful the presentation is, the remake ultimately prioritizes the brand’s iconography over Link’s Awakening’s independence. Link’s Awakening (1993) was not and is not just another Zelda game. It has always been one of the most unique entries in the series, abandoning so much of what The Legend of Zelda represented in favor of a small scoped, thought-provoking sequels to one of the greatest video games of all time– and the only ties connecting them together are minor visual references. Link’s Awakening stands on its own while existing in the series’ continuity. Its rejection of Zelda norms strengthens the overall experience.

And doing wrong by the original really is as asinine, as nitpicky, as simple as Nintendo including the Hylian Shield at all. It cheapens Link’s Awakening– a game whose identity was tied to how it disconnected itself from the concepts and icons that represented the series. There’s no Zelda to save, no Ganon to kill, and no Triforce to collect. The Master Sword was still resting forever, and the only visual cohesion the first games shared came courtesy of Katsuya Terada’s art. To present Link’s Awakening as faithfully as possible to a modern audience would mean once again disconnecting from the series’ familiarities, but the remake only adds more references.

The Hylian Shield is the clear offender, appearing in place of Link’s original shield as featured in 1993 concept art. Dampe, a character who was first introduced in Ocarina of Time, is added as the face for the remake-exclusive dungeon building mini-game. Enemies previously unique to Link’s Awakening, Boarblins, now share even more visual unity with Moblins. What’s worse is that there is a place to reference the series logically. The Mirror Shield looking exactly like it did in A Link to the Past is a nice touch, and the fight against Shadow Agahnim has been tweaked to better reflect his boss fight from said game.

They’re smaller details, and easy enough to overlook, but that’s what makes them more appreciable. They don’t detract from Link’s Awakening’s identity. They’re subtle threads, subtler than the Hylian Shield was in Twilight Princess, but it’s hard to see that when the remake adds so many blatant references to the series’ iconography. It’s certainly charming to see iconic Zelda fixtures reimagined in Link’s Awakening’s art style, but it’s at the expense of the game’s identity which is especially disappointing when Link’s Awakening is otherwise a good remake. The Hylian Shield’s inclusion doesn’t make Link’s Awakening (2019) a worse game, but it ends up disconnecting the remake from the original where it matters most.

The remake captures the original’s existentialist themes perfectly while adding an ethereal air to the already dreamlike Koholint Island. Grezzo’s staff clearly had a firm understanding of Link’s Awakening’s plot, going beyond just adaptation, but there’s no accounting for the original’s historical context and what its lack of iconography represented. There’s no real attempt to humor how independent Link’s Awakening really is beyond a surface level. Replacing details specific to Link’s Awakening’s identity in favor of substance-less references. Look at the brand, consume the brand, remember the brand. The Hylian Shield makes Link’s Awakening look like just another Zelda game.