The Awesome Adventures of Captain Spirit isn’t a video game in the traditional sense. That’s not intended as a pointed criticism of sedentary, choose-your-own-adventure-style titles in relation to more action-packed fare – I, for one, would much rather spend an hour or two playing Gone Home or Limbo for the dozenth time than yet another round of Fortnite.

What I actually mean is that Captain Spirit is, essentially, a prologue to another game: an introduction to the characters, themes, and perhaps even the events of Life is Strange 2; whilst, it’s important to note, engaging the player emotionally and creating an absorbing, stand-alone story that ensures DONTNOD Entertainment’s latest foray into the Life is Strange universe successfully carves out its own unique identity. 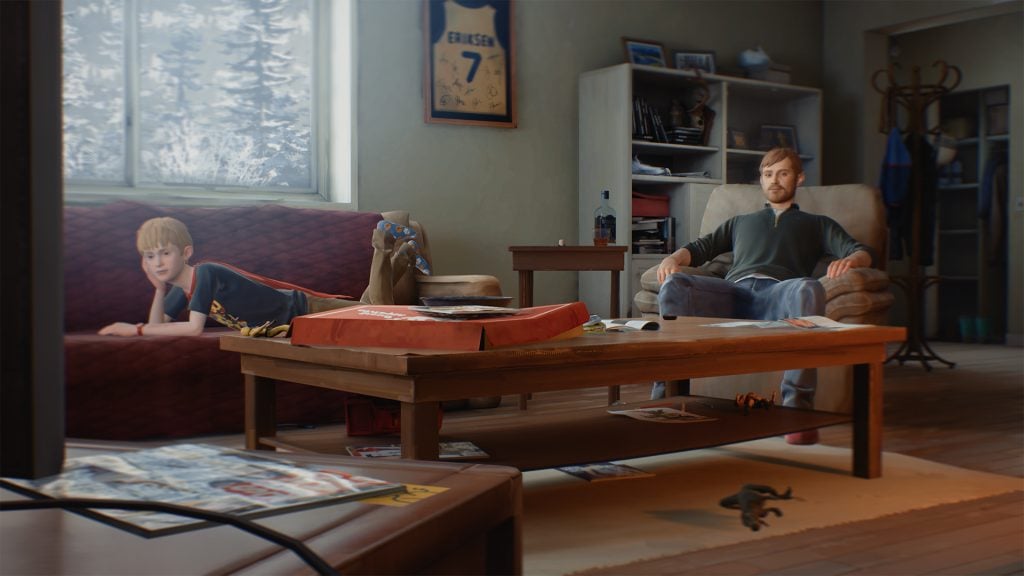 Set three years after the events of the original Life is Strange, The Awesome Adventures of Captain Spirit begins on an average Saturday morning in the snow-covered suburbs of Beaver Creek, Oregon.

With his homework already complete and no working console to enjoy, Chris Eriksen– a 9-year-old boy with a powerful imagination and indomitable spirit – decides to go on an impromptu adventure around the confines of his diminutive, slightly rundown home in the guise of his superhero alter ego ‘Captain Spirit’.

On the face of it, this could describe the premise to one of our favourite 90s cartoons or even a cherished childhood memory of holidays past. However, Chris isn’t simply indulging his imagination and childlike sense of wonder when he dons his custom-made cape.

Following a tragic hit and run incident that claimed the life of his loving mother, Emily, Chris’s father Charles Erikson spends his days drinking himself into a stupor and wallowing in self-pity, leaving his vulnerable young son little choice but to fend for himself and, occasionally, help take care of his increasingly negligent and volatile father. Consequently, childhood isn’t as straightforward and carefree as it should be for a boy of his age, so for Chris, becoming ‘Captain Spirit’ gives him an opportunity to escape his bleak reality and regain some semblance of control in an unpredictable and seemingly hostile world.

I can’t say much more without spoiling it for anyone who’s yet to experience Captain Spirit for themselves, but suffice it to say, the game’s relentlessly moving story captivates from the very first scene; dealing with delicate themes such as negligence and grief in a considered, mature manner that once again demonstrates DONTNOD’s inimitable skill when it comes to writing emotional narratives and complex, three-dimensional characters. The brief, nostalgia-fuel of make-believe that permeate the narrative tap into those lazy weekends of our childhood that seemed filled with infinite possibility and adventure, offering welcome relief from the game’s heart-rending central thread.

Naturally, Chris is the star of the show in every sense of the word, endearing himself to the player almost immediately. In the face of the tragic events that fundamentally altered his father and could so easily have crushed his own spirit, Chris retains an upbeat demeanour, vivid imagination, and innocence that only adds to his charm. In many ways, he forms a counterpart to Life is Strange’s Chloe Price who, having endured similar heartbreak at a similarly formative age, began to fall apart, developing a jaded and cynical outlook on humanity and life itself.

The game’s other main character, Charles, doesn’t quite resonate with the player to the same degree, unfortunately, coming across as the stereotypical grief-stricken widower who’s unrestrained anguish and increasingly self-destructive habits have rendered him completely oblivious to his son’s suffering, rather than something more nuanced or original.

In spite of the general disparity between the portrayal of these two characters, it’s only fair to say their interactions are very well handled. Oscillating between touching scenes of filial love and upsetting instances of unintentional negligence, DONTNOD makes sure we know Charles hasn’t always been this way; that he was once a loving father and husband who simply cannot cope with the death of his wife and the pressures of being a single parent. And perhaps this is why Chris still idolizes his father: he remembers what life was like before Emily was so suddenly and tragically taken from them. All of which adds another subtextual emotional layer to the story and characters, increasing our affection for Chris whilst giving his father’s slightly clichéd personality some much needed depth. 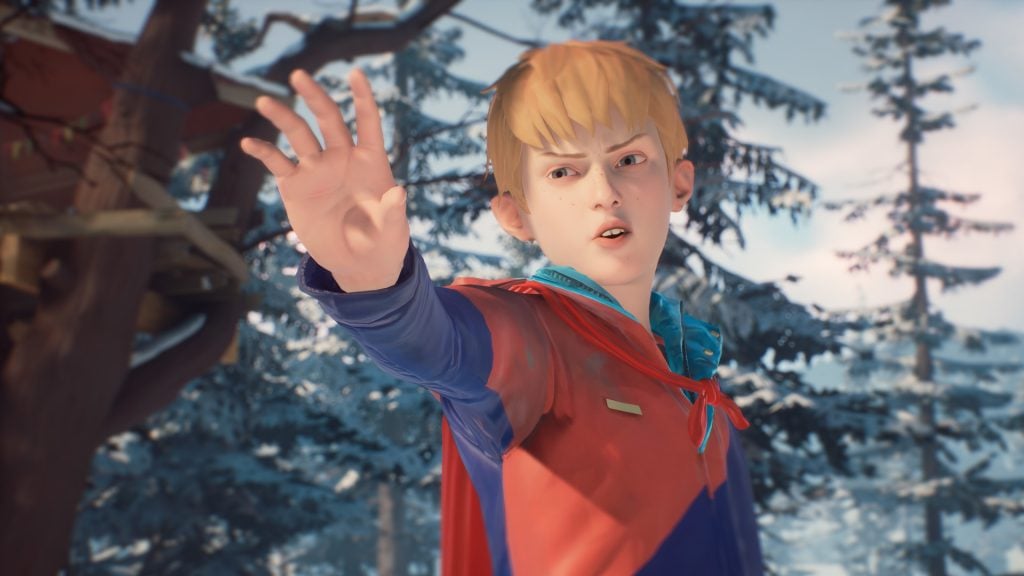 With the usual kind of rudimentary QTEs and dialogue wheels sitting alongside a boatload of documents that provide both additional background information on the characters/world of Captain Spirit and subtle references to the Life is Strange series past and present, the game’s core mechanics will be immediately familiar to anyone who’s ever played a narrative-driven adventure of this ilk.

There are a few small changes specific to Captain Spirit that attempt to differentiate it from previous Life is Strange titles, however. The player is free to alter Chris’s appearance in certain ways (specifically, his superhero attire) at the beginning of the game, for example, as well as complete a handful of separate ‘Quests’ as the story progresses. And, of course, Chris isn’t able to ‘Rewind’ time if something goes awry.

It might not provide the most hands-on kind of gaming experience, but, as I always say whenever I feel compelled to defend the genre, these seemingly simplistic mechanics are, in actual fact, perfectly suited to the ebb and flow of a narrative-driven adventure like Captain Spirit. More importantly, in the case of Captain Spirit specifically, the novel way in which Chris engages with the environment whilst in his superhero form delivers plenty of additional insights into his personality.

Whenever he uses his ‘powers’ to interact with certain household appliances, we gain a deeper understanding of his ability to derive joy from the most mundane of things; which itself captures the spirit of childlike wonder and the irrepressible imagination of our younger selves. But there are more serious inferences to consider here, too.

Chris’s approach to these everyday tasks, whether that be recycling his father’ disregarded beer cans, doing the laundry, cooking Charles’s breakfast, washing the dishes etc., quietly masks the fact that this is a 9-year-old boy who feels, subconsciously perhaps, that he has to sacrifice a part of his precious childhood to take care of his father. A tragic reversal of roles. Equally, the short snippets of commentary we hear while he’s completing his enforced chores give us an indication of how detached Charles has become in the months following Emily’s death, and how stifled for attention and companionship Chris really is.

Moreover, on the odd occasion, these same outwardly hands-off systems let us shape (at least partially) Chris’s very outlook on life. When he’s interviewing himself in the mirror, for instance, it’s up to us to determine whether he still views his father as a hero, despite his increasing aloofness, or if Chris has subconsciously learned to rely solely on himself.

It might not be as exciting as slaloming through traffic at 90mph in a bustling urban sandbox or emerging victorious from a dramatic multi-person firefight, but it’s utterly compelling nonetheless and strengthens the connection between the player, the characters, and the story.

Another stylish and visually evocative offering from DONTNOD 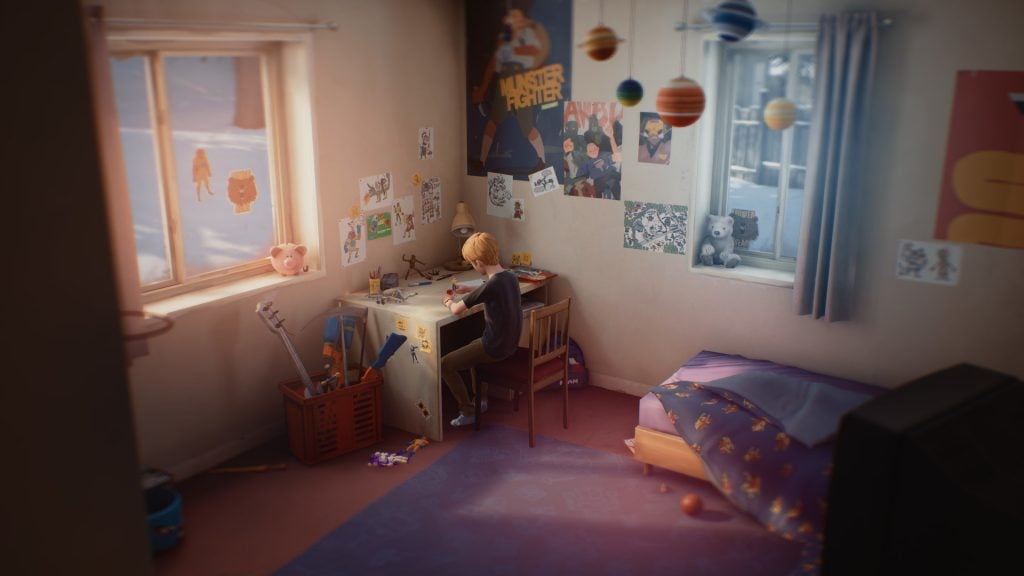 As well as broadly adhering to the same systems and mechanics as seen in previous Life is Strange titles, Captain Spirit also retains the stylized, cel-shaded graphics the series is known for. Built, this time around, in the Unreal 4 engine; a jump in technology that lets DONTNOD apply a fresh coat of paint in the form of brand-new dialogue options and generally improved visuals. However, it’s Captain Spirit’s use of color that really stands out.

The vibrant reds, blues, and yellows of Chris’s room and personal belongings contrast superbly with the dull greys, browns, and off-whites of the rest of the house – most notably in Charles’ unkempt bedroom: a visual juxtaposition of his father’s spiralling depression and alcoholism against Chris’s irrepressible imagination and childlike optimism. While elsewhere, Chris’s colourful artwork, including treasure maps and a handcrafted quest list, endows Captain Spirit with a light-hearted, cartoonish vibe that complement’s Chris’s creative personality in much the same way as photography and Max’s personal journal did in the original Life is Strange, whilst also providing some visual relief from the game’s occasionally oppressive and poignant themes.

From a musical perspective, although the brevity of the game leaves room for only the shortest of soundtracks, DONTNOD has once again hit gold in Captain Spirit, presenting a modest collection of songs that resonate with the story and gently manipulate our emotions in all the right ways. ‘Death with Dignity’ by Sufjan Stevens is particularly effective and will have all but the most hardened individuals fighting back the tears during one scene towards the end of the game I won’t mention for fear of ruining it. If you’ve already completed Captain Spirit, I’m sure you’ll know what I’m referring to.

The value of a review score is debatable at the best of times, but in the case of The Awesome Adventures of Captain Spirit, I’d go so far as to say it’s inappropriate.

Although it’s easy to see why DONTNOD would recognize Captain Spirit as a viable entry point into the wider series, the overwhelming majority of people who’ll be interested in this game are already Life is Strange fans, even if the 2015 original and Deck Nine’s popular prequel are currently sat neatly tucked away in their pile of shame.

Either way, Captain Spirit will be an automatic purchase for these individuals rather than something they need to be sold on. So, as heart-warming and touching as it undoubtedly is, the narrowness of the game’s prospective audience, relatively speaking, makes awarding it an arbitrary review score more than a little facile as far as I’m concerned.

It’s enough to say that Captain Spirit is every bit as moving and charming as you’d expect from a Life is Strange game. What’s more, it augurs extremely well for the upcoming sequel which, at the time of writing, is only a couple of months away.