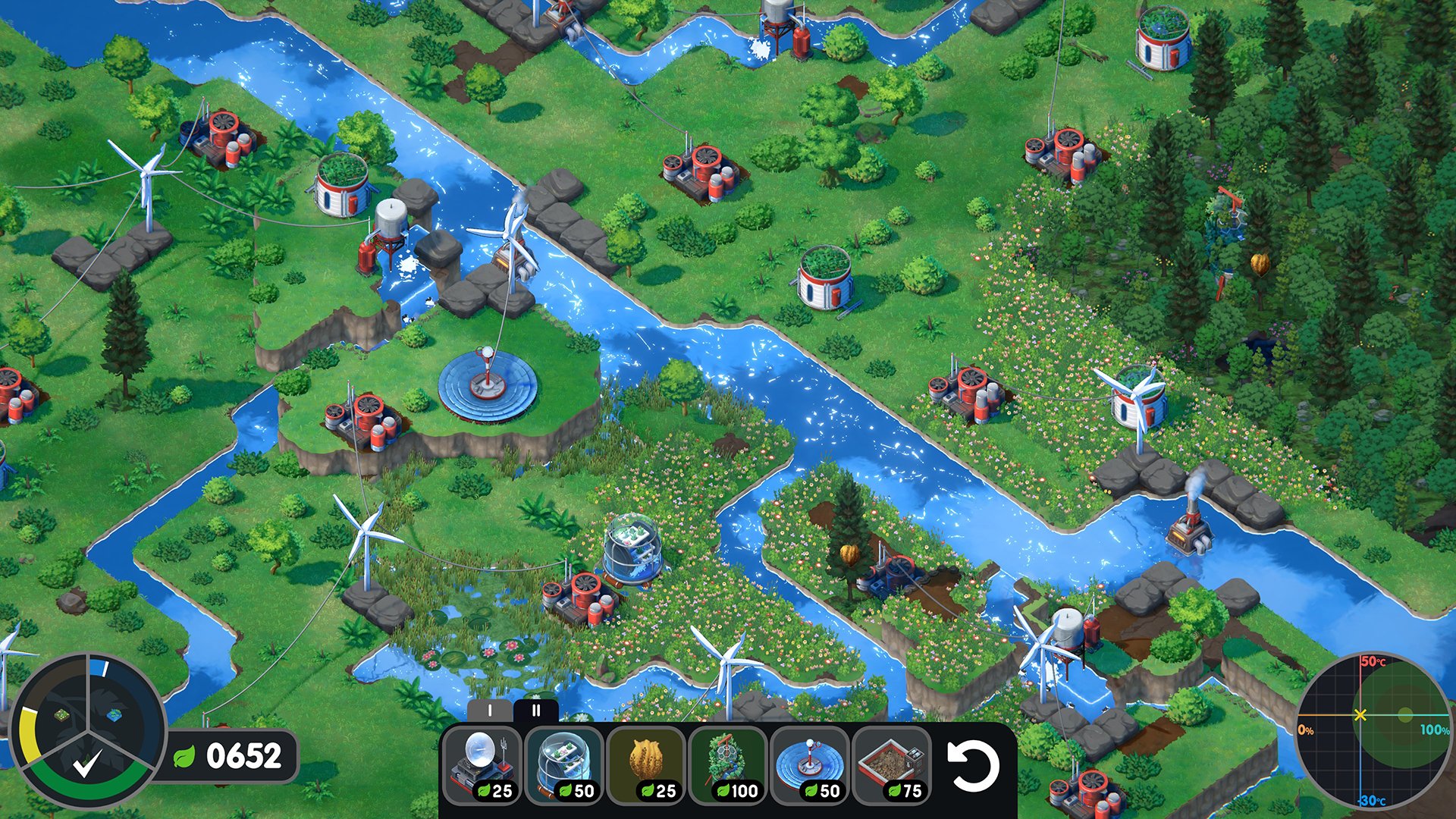 If one word could describe the experience of playing Terra Nil, it would be “serenity.” This newly-announced strategy title published by Devolver Digital advertises itself as a “reverse city builder,” focused on revitalizing and sustaining the natural world. Developed by Free Lives, the team known for creating Broforce and Genital Jousting (perhaps the most dramatic possible tonal opposites for this kind of game), Terra Nil aims to turn its genre on its head by tasking players with caring for a series of beautiful, procedurally-generated environments. After playing through its early demo, this restorative twist is a simple yet ingenious move to revitalize that looks set to only grow more exciting ahead of the game’s eventual release.

Even before the title screen, Terra Nil‘s ambiance makes a strong yet naturally understated impression. The first few soundbites wash over the player, its delicately constructed audio featuring soft piano chords, a gentle breeze, and chirping birds that all meld into a soft and welcoming aura. This early impression is no fleeting sensation—rather, it informs the entire experience of playing the demo from start to finish, teasing the natural revival to come toward the end. My demo began with a small square of a barren wasteland, with no signs of life or vegetation to be seen. However, an inventory at the bottom of the screen showed a selection of facilities to select and construct in this blank slate. Erecting a windmill on a piece of elevated stone was the first step, while installing irrigators turns the dried-up earth into fruitful grounds for growth. Continuing with this cycle of installations soon covered the landscape with grassy hills and verdant plains, a far cry from the initial desolation.

After sufficiently covering the level with greenery, the level fully opened up for areas of new development. More items appeared in the arsenal, allowing for improving the region’s biodiversity along with its plant life. With everything from controlled burns to beehives at my disposal, the world continuously expanded and burst into life as its biodiversity gradually improved. However, it is once the environment has burst into gloriously vibrant life that Terra Nil’s bigger twists emerge. After dotting the landscape with facilities that have revitalized the earth, the game doesn’t want the player to leave even the slightest footprints behind. The final step is to clean up your tracks. With a mixture of boats, airships, and other devices, I gradually recycled all the construction in the level to leave it largely pristine, natural, and free of any evidence of human tampering. Such a simple yet beautiful act perfectly concluded the gradual buildup to a natural revival that began in the demo’s very first moments.

Terra Nil’s mechanics might not add very much by way of inventiveness or originally to its genre. The gameplay features all the simple strategy and planning that defines games of its style, asking players to delicately pinpoint each new installation and development to get the most out of each piece. Terra Nil adds some wrinkles to the formula with the layout of its environment, including elements like forests and rivers that can affect which items players can use. Add this design trait to the fact that Terra Nil is entirely procedurally generated, and the result is an elegant title that makes the most out of simple concepts for effectively endless replayability.

Terra Nil’s wonderfully lush presentation complements its sustainable gameplay. Seeing the formerly empty slate of rock gradually grow into a living and breathing ecosystem crawling with plant and animal life is remarkably satisfying. The level in the demo was packed with little details like deer grazing near the woods and birds soaring overhead, making the scene feel that much more real. Its soft and nearly pastel-like visuals make things even more soothing. The performance did chug occasionally on my PC, but that issue may be related to my setup rather than any issues on the game’s part. Even then, such a slow-paced game hardly suffers from periodic stutters.

All too often, the city-builder genre is about subduing nature. It’s all about building bigger and grander concrete empires—and if a few forests have to get mown down in the process, then so be it. Terra Nil offers an opposite approach focused on sustainability and restoration, showing players the beauty of caring for the world around us rather than antagonizing it in the name of human progress. The seeds have only just been planted and Devolver has yet to reveal a true release window, but Terra Nil’s earliest leaflets are looking immensely promising and ripe for growth ahead of its eventual release on PC.