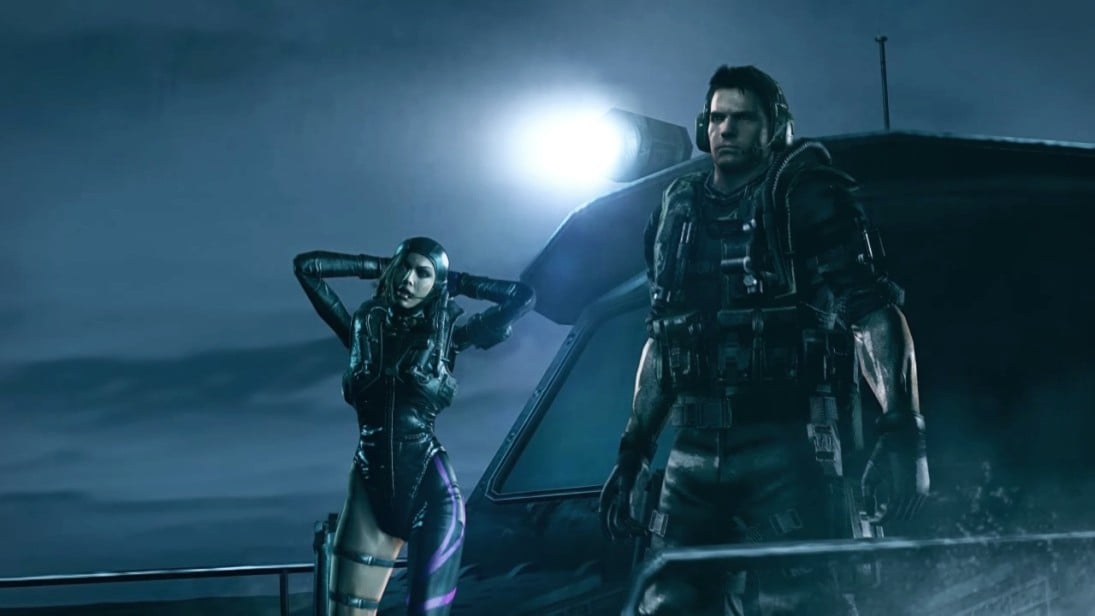 Ever just come crawling out of the black ocean at night, and feel the sudden need to strike a sexy pose when no one is looking at you? No? Well, Jessica has. In fact, there’s no shortage of embarrassing moments to look back at for this most cringe-inducing of characters, and with the anniversary of the series occurring this very month, it’s time to remind folks of one of the worst decisions ever made in regard to it, and it concerns Resident Evil: Revelations.

Jessica Sherawat is a terrible character, let’s just get that out of the way from the get-go. She’s placid, flirty, boring, and totally unnecessary as a character, third-act twist or not. However, if that was the only reason to bring her up again, then she’d have a lot of company from the RE franchise happily, and helplessly, joining her in this dressing down (pun absolutely intended).

No, Jessica isn’t the poster child for bad writing and gender dynamic problems in gaming because she’s a useless twit who only exists to be your forgettable AI partner in a game that never needed co-op in the first place. The problem with Jessica is that she’s only in Resident Evil: Revelations to give the (presumably) male audience something to look at and fondle themselves over between rounds of undead splattery. Don’t believe me? Well, that’s fine, you’re entitled to your opinion and all that. But you’re wrong, so stuff it for a moment and read on.

Early on in the game Jessica actually utters the worst, most offensive, and egregious dialogue of this entire franchise, and for anyone who’s had the patience to play through every installment of this series, that is saying a whole damn lot, particularly with the infamous masters of unlocking and Jill sandwiches of the original.

So here we are on a snowy mountain pass in Europe, where everyone’s favorite boring machismo leading man, Chris Redfield, finds himself in a bit of trouble when he falls a short ways and is attacked by an increasing number of infected monstrosities. It’s a pretty typical Resident Evil scenario, particularly with the focus on co-op and partner-based gameplay that has been the go-to gameplay style since RE5 dropped 8 years back.

Of course, he radios his partner, Jessica “sex appeal” Sherawat for help, which is exactly what you’d expect any sane person to do in such a situation The thing that stops this whole scene dead in its tracks though is how she responds and believe me, these are her exact words: “Me and my sweet ass are on the way!”

Wait-wait-wait, hold on a second. You’re a highly trained operative in an incredibly dangerous situation who has just been called upon to save your brother in arms, and your response is to remind him that you’ve got a great ass? How in the hell did this line get in the game? Just for context, this is a game that was released in 2012, a mere two years before the firestorm of GamerGate would be ignited. and somehow this absurd bit of dialogue still made it past every form of quality control that a major publisher like Capcom could throw at it.

And it doesn’t stop there. At least in this incredibly bad scene, Jessica has the decency to be fully clothed and not standing in ridiculous poses to remind you how damn sexy she is. For the rest of Revelations, we’re not so lucky. When she’s not mooning at you or making googly eyes in your general direction, she’s bending and contorting herself into the kind of photoshoot poses you’d find in Maxim, even when literally no one but the player could possibly be looking at her. Is Jessica breaking the 4th wall or is this just terribly, terribly, terribly short-sighted design and writing? Wait, don’t answer that.

You see, there exists a cabal of fools out there who still believe that this somehow has context in the story and let me get down to the brass tacks of how amazingly stupid and asinine that opinion is in pain-staking detail. Now, be warned, here come the spoilers for anyone who could possibly be bothered to give a shit. Still here? Okay, onward then: Jessica is a spy working for the me-too Umbrella wannabe, Tricell. So that’s why she’s trying to distract Chris with her sexy, sexy body, even when he’s not even looking at her. It’s a ruse you fools, and now it all makes sense! Except it doesn’t and if you still need me to explain to you how stupid that is, then let’s just drop it all here and you can go play a bit of Dead or Alive: Xtreme Beach Volleyball to let off some steam.

The thing is, this problem has existed in the RE series for a long while. Let us not forget the short-skirted, tube-topped Jill Valentine who graced RE3, after her fully, and properly, clothed appearance in the original game. And this isn’t just to pick on Resident Evil either, as Lord knows this problem even stretches to more progressive and better-written franchises like Metal Gear Solid. But Kojima, immature horndog that he is, at least has the decency to give a character like Quiet or Eva a reason to exist, and a characterization that grounds these ladies in some fathomable kind of reality. Characters like Jessica are walking spank banks and the time for these characters to go away, or at least be given more to do than strut around showing us their assets, is now.

In an age where every deviant with an internet connection can find something to titillate them without spending one red cent, the fact that developers still think they need to get our jollies off to sell their game, especially in a series with a demonstrated track record, is beyond ridiculous. When your best and most successful games include fully dressed characters wearing either jeans and a vest (Claire Redfield in RE2) or a girl in a sleeveless sweater and a lady in a red cocktail dress (Ashley Graham and Ada Wong in RE4), it’s time to take a look at what you’re doing, and what you’re saying, with characters like these, and if you can’t justify it within any conceivable realm of logic or reason–then it’s time to do away with them altogether. Either that or just start making erotica and be done with it.