Coming up with a fresh take on the puzzle genre is near-impossible nowadays. While classics like Tetris, Puyo and Picross were mainstays for years, puzzle games saw a massive new wave of popularity with the introduction of smartphones. Millions of Bejeweled clones later, the oversaturation of the market has left many core gamers wondering, “What happened to the fun, unique and challenging puzzle game experiences I used to know and love?”

Sushi Striker: The Way of Sushido might be exactly what you’re looking for. 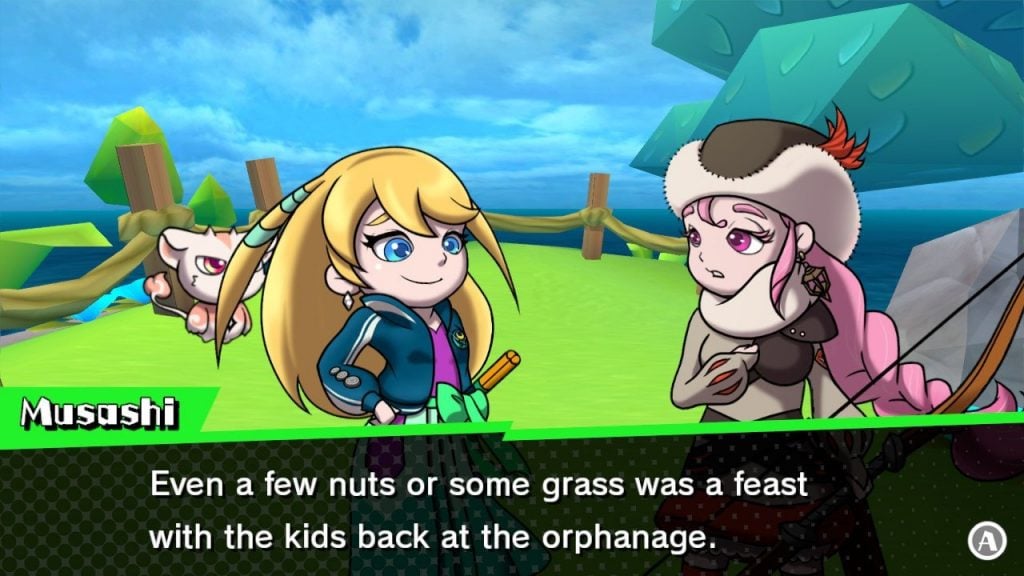 Sushi Striker takes place in a fictional world ravaged by bitter wars over…you guessed it, sushi. These appropriately-named Sushi Struggles pitted the Empire, who sought to horde all of the world’s sushi for the elite, against the Republic, who sought to make it available for everyone. The game starts years after the Republic lost, leaving behind a wealth of orphans and resulting in sushi being banned from the entire continent.

One such orphan is Musashi, a girl (or boy, the player can choose) who lost both of her parents during the war and does her best to take care of the younger kids in the orphanage. One day while scavenging for food, she meets a charismatic Striker who introduces her to the joys of sushi (like most younger people, she’s never had it) and sushi sprites, little Pokémon-esque creatures who can conjure sushi and fight in sushi battles. Before long, Musashi finds herself on a journey spanning multiple continents in the pursuit of taking down the Empire and making sushi available to everyone.

Absolutely crazy premise aside, the sentiment at its core is really heartwarming and happy-go-lucky in a Saturday-morning cartoon kind of way. The game does a good job of feeding players bits of narrative and backstory over time instead of throwing everything at the start, allowing players to get into the action fairly quickly. 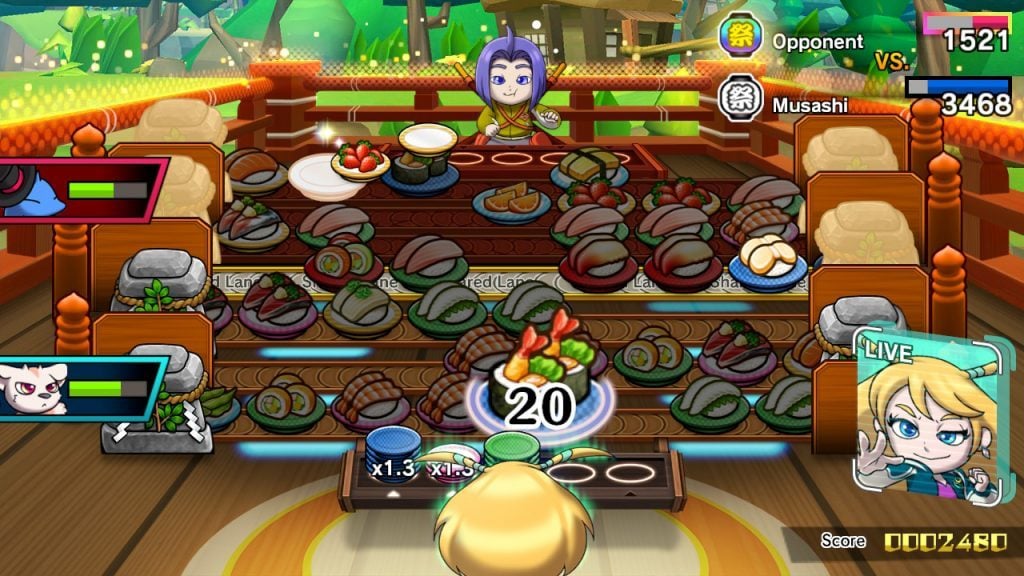 A Fresh Take on a Classic Idea

At its core, Sushi Striker is a puzzle game with RPG-elements. Players can either use the touchscreen or the control stick and buttons to link plates of sushi on a constantly-moving conveyor belt. Different plate colors denote different sushi quality; the higher the quality, the more damage those plates do. Stacking as many plates as possible is key, but so is utilizing the special skills granted by the sushi sprites you collect.

Want to take an aggressive approach? Call on Tigazo and temporarily charge your plates with electricity, causing extra damage. More worried about having a strong defense? Elekan is your girl, providing a strong shield that reduces damage for a limited time. There are dozens of these little guys, and each has its own unique skill that, if you time it right, can be a major factor in turning the tide of battle. Pair the variety with only being able to take three sprites into battle at a time, and Sushi Striker ends up offering a surprisingly deep puzzle experience. Some might be turned off by the chance of losing due to a perfectly-timed skill by an opponent, but every game that I played felt fair and balanced. 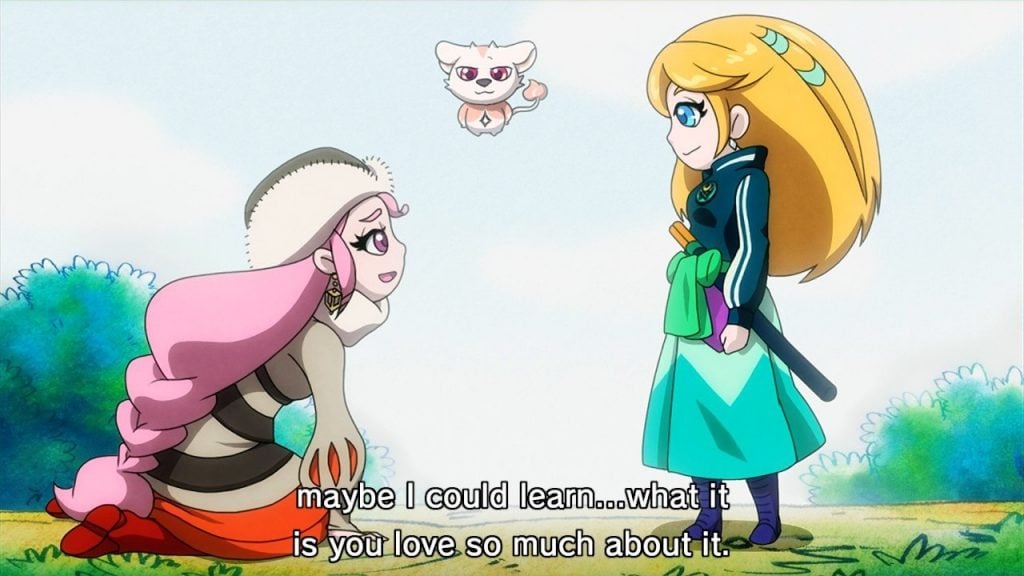 I’m a sucker for RPG systems in games, and the gameplay loop in Sushi Striker is straight-up addicting. Musashi and all of her sushi sprites can level up, increasing their HP/strength and defense/sushi quality, respectively. Stuck at a particularly tough match? Both wins and losses earn experience, so grind away! It’s a great way to keep the game beatable while still providing a stiff challenge to those who refuse to level up any more than they need to. Each match is graded on a letter scale and offers certain achievements players can aim for (“Win with 30% or more HP,” “Use less than 5 skills and win,” etc.). Your hard work won’t go unrewarded, either. Get enough achievements and you’ll unlock special hidden stages and other goodies for your trouble.

While all of these mechanics are great in their own right, the game does suffer from some strange formatting choices. The first few hours of the game are bogged down by extreme linearity and a distinct lack of features. The gameplay was tight, but there was hardly anything outside of it. No hub, no extra areas, no NPCs; just a linear path towards the next match. It was here when Sushi Strikers felt the most like a typical mobile game, and it was truly disappointing.

It isn’t until the third act when the game opens up (a little, at least) and gives players other things to do and people to interact with. That’s not the end of it, however. Players can start enjoying local multiplayer battles once they reach this point in the game, but they can’t unlock the online multiplayer functionality until Chapter 5! By that time, I’d begun to wonder if the game was improperly labeled as having online multiplayer. One could argue that it’s to ensure everyone online has the basic gameplay down, but it’s not practical. Friends who want to play each other online right away need to wait hours upon hours until they can do so, and the pool for matches with random players is extremely limited. Indeed, this decision might’ve severely hampered the game’s potential for a thriving online scene right out of the box. On the bright side,, though, the few matches I was able to enjoy online were buttery smooth. 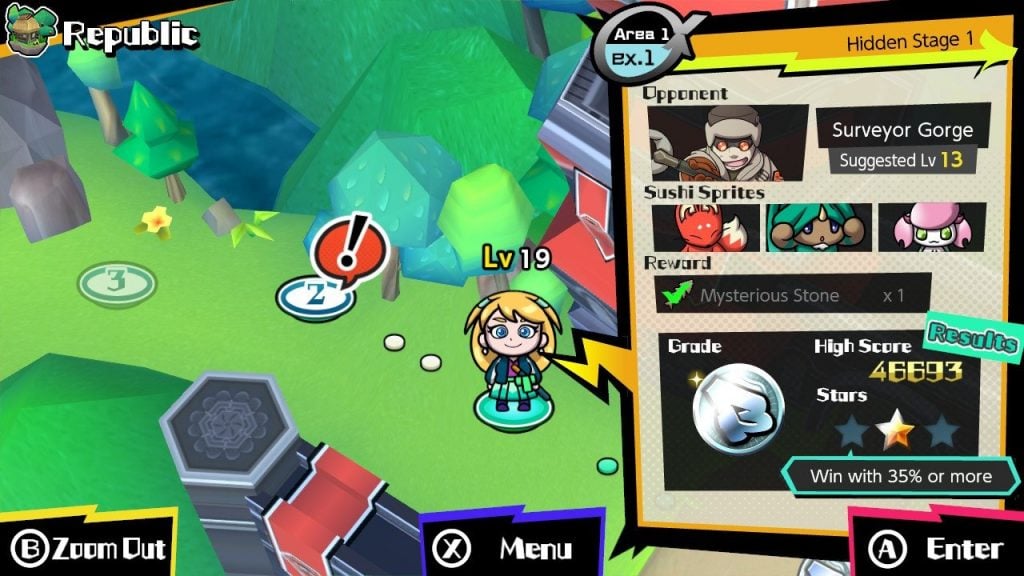 Formatting issues aside, Sushi Striker is one hell of a charming experience. From the character designs and expressions to the unique endcard dialogue that shows up for every win and loss, this game is brimming with personality. Though they’re pretty sparse, the fully animated cutscenes found throughout were just the right mix of campy and cute to feel like a treat every time a new one premiered. The Disgaea-esque skits preceding battles are just as silly and well-written, but lack full voice acting. Similarly to the recent Ni No Kuni 2 (though not quite as bad), the partial voice acting in these scenes hurts the overall experience a bit.

On the presentation side of things, the HD character portraits (again, reminiscent of Disgaea) are both sharp and colorful. In fact, all of the menus, battle screens and anything else 2D in the game look crisp and quite attractive. Where the visuals take a hit is in the overworld. One look at the map and it’s painfully obvious that Sushi Strikers originated as a 3DS game. While it’s colorful and charming enough in its own way, it’s an eyesore compared to everything else. The music is somewhat middle of the road–bright and enjoyable enough, but nothing really catchy enough to warrant listening to it over your own music. 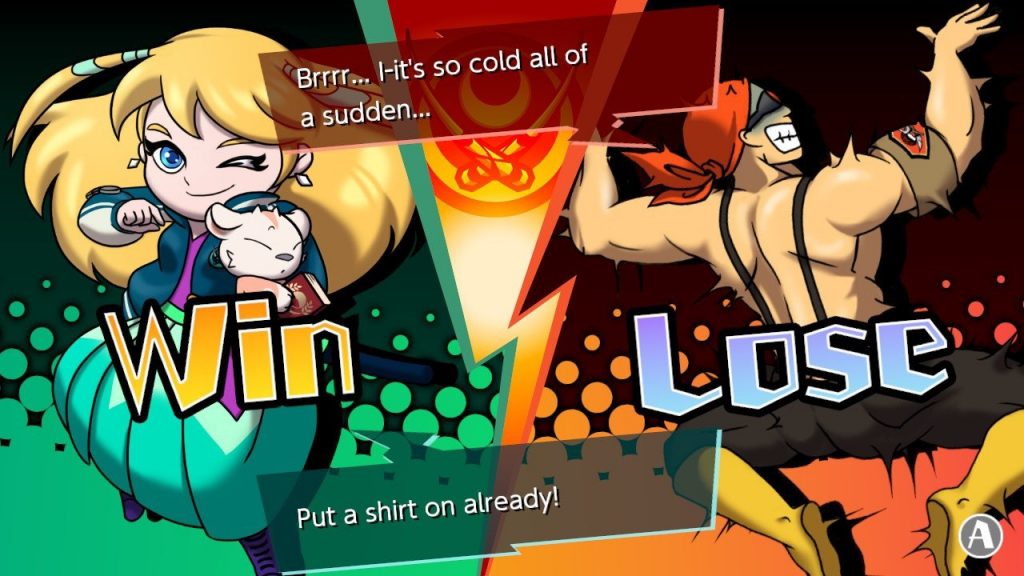 Sushi Striker is a game that many might’ve written off before getting a chance to play it. It wears its 3DS roots on its sleeve, but the core gameplay is addicting and the production values (minus the overworld) are top notch. What could’ve easily been a quick mobile-esque experience turned out to be a thoroughly enjoyable, full-fledged game that offers plenty of content for the discounted asking price. If you don’t mind waiting several hours for the game to open up and several more to play with your friends online, this one is well-worth a purchase. If nothing else, give the eShop demo a try!