Mario is a running, jumping fool who just won’t quit, and so Nintendo’s first foray into the mobile market for their iconic mascot naturally attempts to capitalize on that, those enjoyable athletic attributes on full display with Super Mario Run, a side-scrolling auto-runner for iOS (with release on Android devices sometime in 2017). Spanning 24 short levels, Run is a pleasant, if a little too safe, no-brainer from a company that excels at crafting platformers like almost no other, but the normal glee derived from guiding the nimble little plumber through the various obstacle courses that make up the Mushroom Kingdom is noticeably lessened by the lack of control and content.

The basics of Super Mario Run are easy enough to pick up; as soon as the level starts, Mario is automatically off to the races, dashing ahead left to right at a steady clip, stopped only when he reaches a wall that must be scaled, or at designated blocks that allow players to pause and perfectly time their next move (or even occasionally jump backwards). Small obstacles are easy enough for him to clear on his own, but for larger gaps or higher platforms, a simple tap of the screen makes him jump (holding it longer gives him some extra air). Though there are a few other timing-based moves, such as a momentary spin that briefly keeps him afloat, or a tuck and roll, the single action that Mario has done best over the decades is usually all that is needed to reach that flagpole at the end. 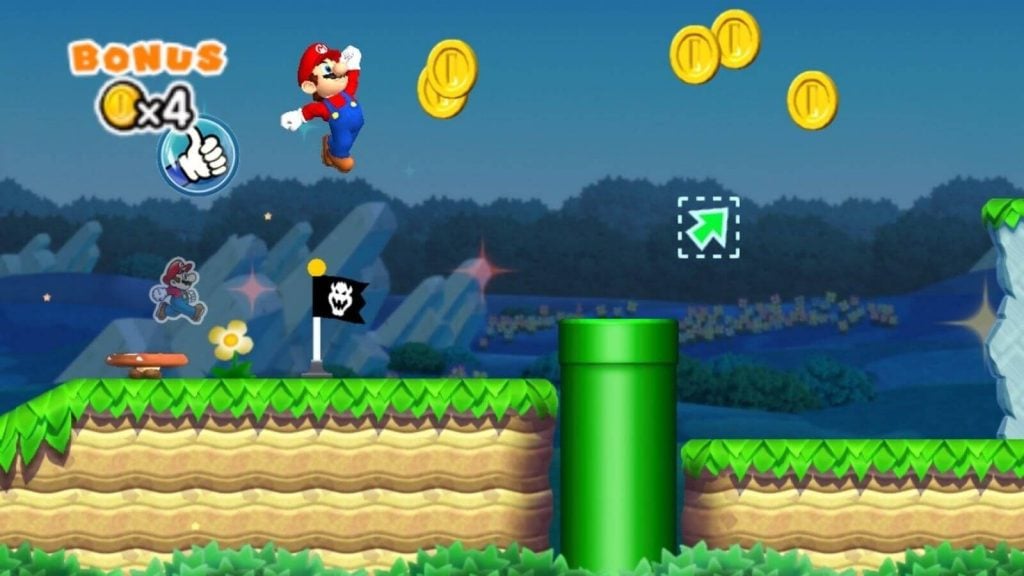 For the first few stages of the game’s main Tour Mode, this distilled gameplay works well enough, showcasing some creative possibilities, despite the lack of challenge. It’s a nice introduction to what Super Mario Run could have been, almost a puzzle-platformer, where inertia is one of the problems to solve, but instead the game quickly sprints down a road well-traveled in the series, widening the bottomless pits and increasingly packing the small screen with more and more baddies. It’s the usual chaotic ballet, which certainly provides some fun and tense moments that recall the classics, but the devolution of inventive stage design into uninspired gauntlets of Koopas and Bullet Bills, Monty Moles and cannon fire, or Lava Bubbles and Bowser bridges doesn’t feel quite like the right match for the limited inputs of the hardware. At times the lack of precision control over movement makes bouncing and spinning one’s way to Princess Peach’s holding cell more relieving than satisfying, like surviving a war zone you were forced to charge through instead of displaying platforming prowess voluntarily.

Shorter levels mitigate some of staleness, as well as the frustration that might be had from restarts, so nothing feels completely unforgiving or overwhelming, even for newcomers, but this otherwise smart decision for a mobile app is also the source of another deficiency: the lack of content. With each stage taking roughly a minute or so to complete, the twenty-four that come with the purchased version can be breezed through fairly quickly by veterans. Yes, there are various colored coins to collect that add some replay value, and it’s clear Nintendo expected people to enjoy tracking them all down, but the reward for doing so is mostly bragging rights. Though some may love the challenge these collectibles present (unlike previous Mario games, they must all be gathered during one pass of the stage), the hellish repetition required won’t appeal to others, and so those players are left with only a few secondary options with which to eke additional entertainment out of. 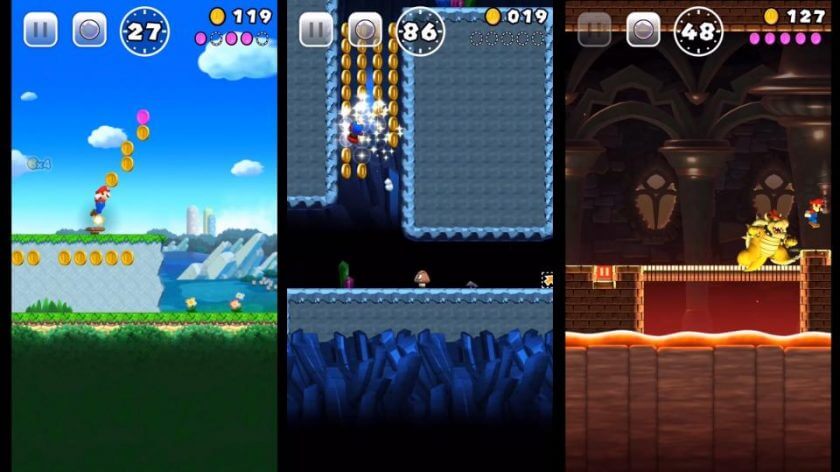 A Kingdom Builder mode offers various Mario assets to be purchased with in-game coins earned by running through levels, which can then be placed in certain designated spots to flesh out Peach’s castle’s environs. It’s shallow eye-candy, but pleasant enough for those whose hearts warm to the sight of question blocks and the like. Some items, like Toad huts that unlock usable characters, at least have some basic functionality, but most are purely cosmetic. The good stuff needs to be unlocked as well, by gathering Toads of all colors to the grounds, a task that is accomplished by playing the Toad Rally mode, where Mario goes head-to-head with the ghost of another player in a timed competition to see who can collect the most coins and “applause” over a stage, the prize of which is an uptick in one’s village population.

These competitions require Rally Tickets to play (earned by completing Tour stages and collecting coins), but losses will also cost Toads from one’s personal stock, a gut-punch that doesn’t exactly encourage players to take on higher-level opponents, for fear of eroding their already meager population even further. Having beaten the game’s stages fairly easily and collected roughly half the coins, I was nevertheless often smoked in these head-to-heads, a result of rarely being matched with anyone close to my skill level. It’s a funky system that feels far too weighted toward experts , and ultimately exasperates more than captivates.

The core experience of Super Mario Run is the main draw, however, and though it looks good and offers some average Mario-style gaming, it’s also definitely more a sprint than a marathon. Sure, you can play with one hand, and that’s a fine thing for simplicity’s sake, but the enjoyment of Mario on on mobile is a short-lived one.