Super Mario Maker is a fantastic game. Very few would argue against that, despite its shortcomings. Sure, the menus outside of the level creator are a bit clunky and hard to use, and the online experience has the classic Nintendo lack-of-charm, but the actual gameplay is solid. The level editor is easy to use and surprisingly powerful, and the gameplay feels like the classic Mario we all know and love. Mission accomplished, it seems. Those are all good aspects, but this article is about failure, so let’s complain!

There is a defining mechanic behind not just every Super Mario Bros, but most every 2D platforming franchise. This genre of game relies on education through level design. There are no tutorial or text fields filled with hints here. The player learns through play. The levels are designed in such as way as to teach the player how to overcome the events ahead. The original games which Super Mario Maker draws from are divided up into worlds, sets of levels all following a specific theme. The ice world, the desert world, and so on. These stages don’t just follow a visual theme, they also exhibit design cohesion. 2D Mario games are hinged on this very simple and effective design.

The unifying aspect of all the 2D Mario games is their steady implementation of game mechanics. A world in a classic Mario title starts out simple, introducing a new gameplay concept in a low pressure and easy to understand manner. As the player progresses, they find the same concept being used in new and more challenging ways. The stages are meticulously laid out as to teach the player how to overcome the new challenge, then ramp up the complexity and difficulty over the course of not just one, but a set of stages delineated as a “world”. Players learn new skills along the way, becoming better as a whole in the process. Each level establishes a concept, then moves on to gradually combine these designs into a challenging level. Teach the player how to complete a challenge, ramp up the complexity, establish a new design, then finally combine them into a final test of skill.

Here’s a platform, it swings back and forth. Now, here are 2 platforms swinging over a gap. If you fail, you can run back to the left and try again. I hope you’ve got that figured out now because the next section has 2 platforms swinging in a different pattern, suspended over a lava pit. Missing this one will kill Mario. Overcome the challenge, move to the next iteration, and repeat until you finish the level. The next level will teach you a new design, and so on, eventually combining everything you’ve learned into a final stage at the end of the world. This is the basis of a difficulty curve, a hugely important aspect of all gaming genres.

After teaching the player the basic concept behind pendulum platforms, the level then presents a difficult challenge to the player like this one in Lemmy’s Swingback Castle, from New Super Mario Bros. U

This is where Super Mario Maker fails. This game is based entirely around the “level”, not the “world”. Creators are locked into building one level at a time, now forced to jam this progression into one short play experience, or eschew it altogether in favor of brutally difficult stages with little to no difficulty curve to speak of. The player is assumed to be of a high skill level, in the know about the high-level techniques of Super Mario. This doesn’t bode well for the more casual audience, of which there are many, who look for content fitting into their skill set. It becomes difficult for him or her to find content they can complete, and there isn’t much improvement to speak of. It’s either levels which they can finish with their current level of experience or stages far above their pay grade. The middle ground is lost to limited design options. This is “level design”, not “game design”.

This problem could be solved by looking back on the aforementioned principles of Mario games throughout history. Allowing creators to build, not just a level, but instead, a set of levels meant to be played in a specific order would open up the game to real progression, as opposed to playing a set of unrelated and lightly curated levels in 100 Mario Challenge. This form of play does little to teach a player how to actually play Mario. Here it’s more about pure content than progression. Levels are provided under difficulty settings automatically generated based on the number of players who have completed the stage, with the ability to skip a level to avoid frustration. Most players take advantage of this skip feature quite liberally, as they continually run into content they are not equipped to handle. Players are not encouraged to practice or learn new concepts, instead just skip around until they find something in their wheelhouse.

Sets of levels designed to be played one after another would widen the appeal of Super Mario Maker while helping to teach and hone players skills. As it stands, Super Mario Maker is mostly for high-level players. The majority of levels created after the first few months of the game’s lifespan are of the “kaizo” variety. These levels have a very small audience due to their difficulty and use of abstract concepts. Kaizo is great for those who can overcome its challenge (and those who prefer to watch instead of play), but there are far more people who can’t and have no interest in doing so. 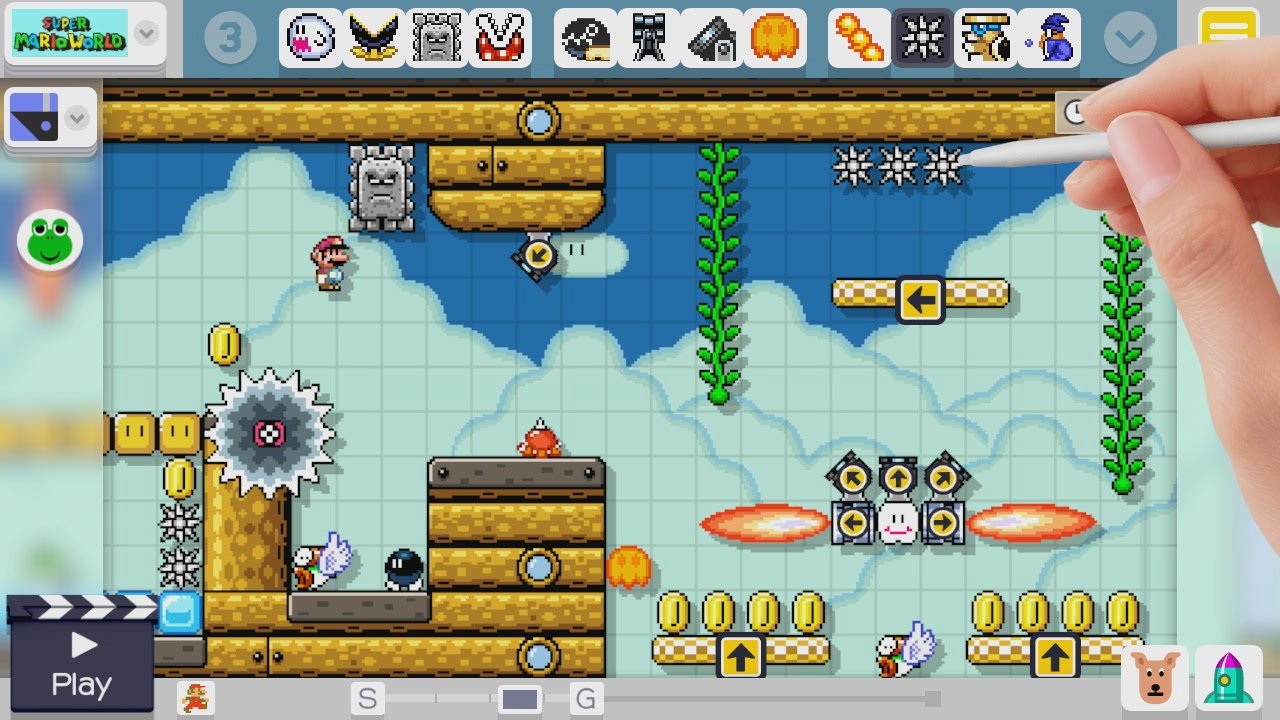 Super Mario Maker’s editing tools are vastly powerful and easy to use. Let’s hope Nintendo doesn’t throw away this innovation in level design.

Super Mario Maker has thrived long after its release thanks to Twitch and YouTube. “Worlds” would further this aspect by allowing creators to put together level packs made specifically for video content creators. Themed sets of stages and speedrunning packs would generate even more excitement, bringing in even larger audiences. It would improve the game’s longevity as well, by providing cohesive content for a longer lasting play session.

Worlds would open up more creative freedom without adding in new level editor tools. Now the creator can stretch and iterate on a concept across several levels, pushing an idea to it’s limits. Continuity through a long-running theme is established, rules are set and then broken, and a steady difficulty curve is implemented. Players are much more comfortable and motivated to keep playing as a result. Now the game is giving the players the opportunity to expand their skills, which opens up even more content. Over time, the players build up the skill set to tackle the more difficult stages. You’re grabbing consumers at the entry level, providing content to keep them playing, and opening up even more content over time via experience. That is how you build, expand, and retain an audience.

The biggest issue with Super Mario Maker is content distribution. Searching out quality levels which fit into your specific demographic is a frustrating experience, and 100 Mario Challenge does little to rectify the problem. It’s difficulty settings are less than consistent and the inbuilt search tools are lacking. Worlds would help out here as well, providing self-curated content designed for longer play sessions. No longer are players forced into playing one level at a time, then searching for a new experience through the provided online tools. Now a player can sit down and enjoy an hour long Super Mario Bros experience with little work required.

There really isn’t any drawbacks to including level packs in Super Mario Maker. Creating worlds would not be mandatory. Designing one level at a time is less daunting for a creator to be certain, but why not let those who envision something larger do so? Both audiences can be satisfied without sacrifice.

Implementation of content packs could be the standout innovation in a new Super Mario Maker entry. Nintendo operates on a “big innovation” principle. Unlike many other studios who approach sequels with smaller design iterations, Nintendo mostly sticks to the big ideas. Generally, they don’t make a new game in an established franchise If there isn’t a new idea to justify its existence. Ask any Pokemon Snap fan, they’ll tell you all about it. We waited a very long time for a new Star Fox game. Nintendo was waiting for a big idea, in this case, new hardware which could change the game at a fundamental level. Unfortunately, it didn’t turn out so well, but they took a risk on a big idea. That’s what Nintendo does, and they are successful more often than not. Super Mario Odyssey wouldn’t be nearly as compelling without its capture mechanic. If it was a typical 3D Mario game we would be happy but not nearly as jazzed as we are now.

Worlds might not seem like a large innovation on the surface, but it’s effects are long reaching and nothing but positive. New creative freedoms, audience expansion and retention, more convenient content distribution centered around long-form play while still allowing for short experiences made perfect for a handheld. That sure does sound like a big change to me.

Big enough to justify a Nintendo Switch entry though? I certainly hope so. Super Mario Maker has already made its way to both the Wii U and the 3DS and sold well over time. Adding a world building mechanic, complete with a simple overworld designer for good measure, could be the next big push towards creating the idyllic Super Mario Maker experience. Now let’s hope someone at Nintendo reads this article. If so, feel free to contact me for credit and residual payments. The best designers don’t work for free, you know.

NSFW – Strong (celebratory) language – In the video below, the great CarlSagan42 completes a “Kazio” stage based on exotic uses of the classic POW block. Kazio is a term used to describe complex and highly difficult Mario stages, first used by Super Mario Bros ROM hackers in the early 90s. Interested in ROM hacks? GoobmaStomp has you covered there too with a recurring series of articles all about the subject, written by yours truly.