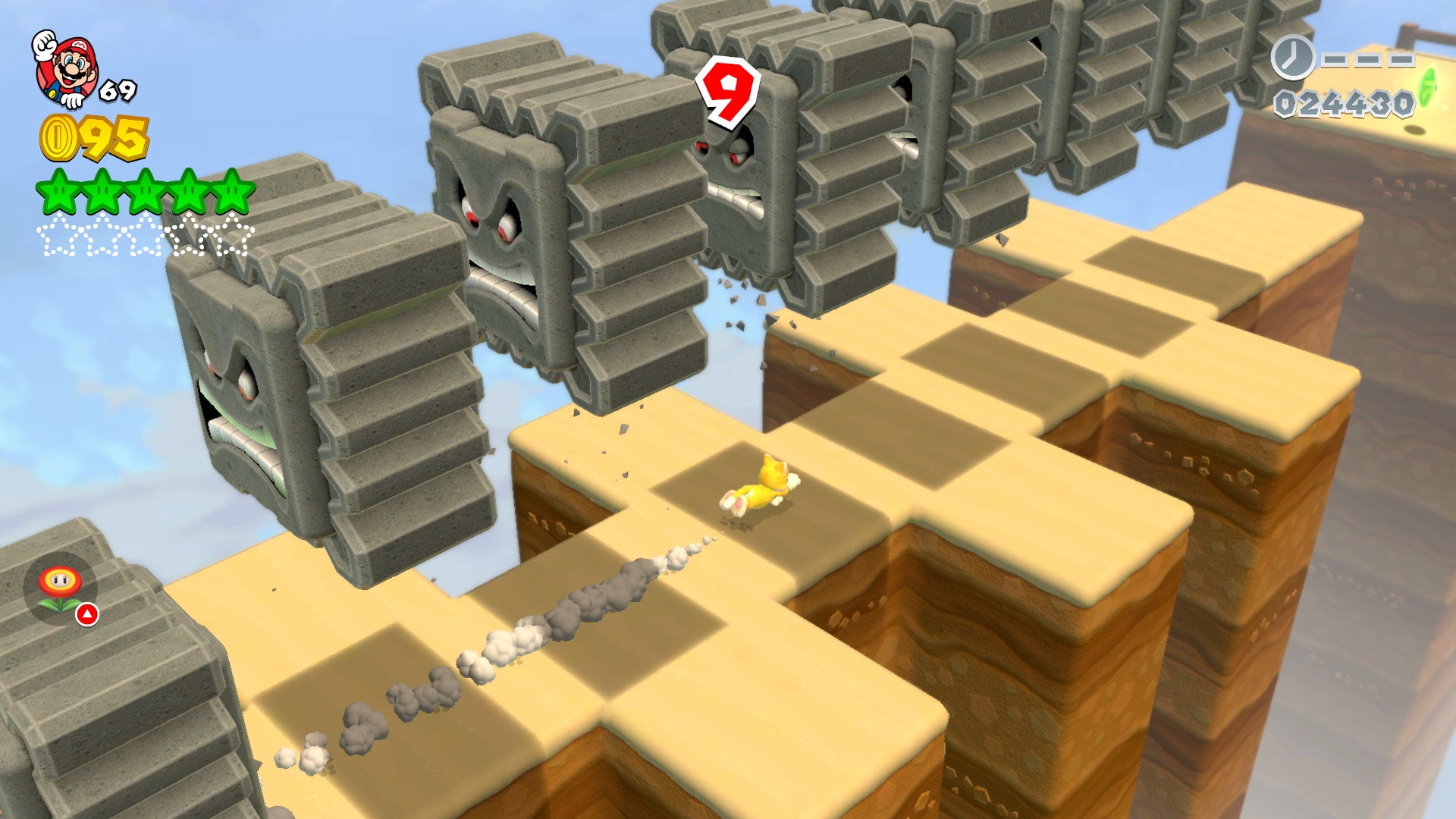 A relatively conventional Mario installment on the surface, Super Mario 3D World plays with the classic Mario structure in interesting ways. It isn’t afraid to, for instance, juxtapose a sprawling, open stage with a more condensed area that only provides 100 seconds on the clock. One such experiment, the Captain Toad stages, ended up being so novel that they led to an entire spinoff title dedicated to them. Of these myriad ideas, one in particular stands out: the Mystery Box bonus stages. Introduced in Super Mario 3D Land, these bite-sized challenges were drastically improved in 3D World to the point where they are some of the game’s most compelling pieces of side content. The Mystery Box stages are brilliant in their simplicity, and they are rife for further expansion and experimentation in future titles.

In Super Mario 3D Land, the Mystery Box idea had humble beginnings. Mystery Boxes can be found within levels and on the world map, and players are only given ten seconds to complete the challenge and grab the Star Medal and coins that spawn afterward. It’s an incredibly simple idea, but it’s one that demonstrates so much promise. The strict 10-second time limit turns what would otherwise be a menial task into a frantic scramble. Within those ten seconds, players are expected to quickly process the situation around them and execute the task as efficiently as possible if they want the reward.

These stages feature a kind of manic energy similar to what makes the WarioWare series, with its collection of seconds-long microgames, so enjoyable, and translating that premise into the easily-readable action of a Mario game feels like a natural fit. The challenges within these Mystery Boxes are almost a little too simple, however; most of them simply require the player to defeat a handful of enemies to nab the reward, and the ones that do not simply give away the reward for free. It was clear after 3D Land that the Mystery Box idea had plenty of room to grow, which it thankfully had the opportunity to do in the following installment.

Super Mario 3D World took the basic premise of the Mystery Box stages and expanded on it exponentially. Much like before, Mystery Boxes are placed in certain levels and the world map, but the mid-level Mystery Box challenges are now based on the specific mechanics of the stages they are found in. This means that, in addition to straightforward battle arenas, Mystery Box challenges can now take the form of miniature platforming challenges and other bite-sized objectives. One challenge may involve jumping on a row of Piranha Creepers to cross a gap, while another may require players to catch a rabbit using dash panels.

Once again, none of the challenges on offer are very complicated, but the greatly increased variety combined with the 10-second time limit means that they really test players on their ability to quickly process information, much more so than 3D Land ever did. The varied objectives also ensure that players are never entirely sure what to expect from a Mystery Box stage before entering it, although the mechanics featured in the main level prepare players sufficiently for what lies ahead. If the main stages can be compared to a class exam, then the Mystery Box stages can be seen as the bonus question—an optional way for players to prove that they have truly learned the material. These bonus stages feel much more purposeful than they did in 3D Land as a result of this design approach, and it helps that they are generally much more fun to play through.

The Mystery Houses placed on the world map take the Mystery Box concept to a whole new level. These contain a gauntlet of Mystery Box challenges played back-to-back, and players have to start from the beginning if they fail. These Mystery Houses are very akin to the rapid-fire microgame stages of WarioWare, and they feel like a logical evolution of the Mystery Box idea. Placing these ones after another really puts players on edge in a way that the mid-level Mystery Box challenges never do, and the Houses do an amazing job at challenging players on their consistency at processing information. Although the Houses are completely separated from the main stages, every challenge within most Houses adheres to a single theme, such as throwing objects or forward momentum, so players still have a general idea of what to expect with each challenge and are never thrown in a situation they were never prepared for.

In between each challenge, players are given time to rest without a time limit hanging over their heads. These moments are unusual since most levels in 3D World have a timer, and they are somewhat ironic considering how fast-paced the actual challenges are. These breaks in the action are, however, completely justified, as having only ten seconds to complete even a simple challenge is significantly more stress-inducing than spending upwards of 500 seconds to finish a longer stage. By including these breaks, the developers acknowledge that many players would likely get overwhelmed if they had to perform each high-intensity challenge uninterrupted, so they allow players to complete the Houses at a pace that suits them. These elements make the Mystery Houses feel like incredibly well-considered optional challenges, and the fact that they all culminate in a final, 30-challenge Mystery House at the end of the postgame makes them feel like more than just fun diversions.

How They Can Be Further Improved

Despite how well-explored and thought out the Mystery Boxes were in Super Mario 3D World, they still have room for further expansion. Although the Mystery Houses are great at testing split-second decision-making, they are arguably held back by the fact that the order of the Mystery Box challenges is the same every time. Upon further replays, players can simply memorize the placement of each challenge, which significantly lessens the need to quickly adapt to an unforeseen situation. Future Mario installments could randomize the challenge order so that Mystery Houses remain challenging even after multiple playthroughs. Of course, this approach would probably remove the sense of challenge escalation that the Houses currently have, so this could work best as a WarioWare-esque side mode. Just like they did with the Captain Toad stages, Nintendo could make a full game out of this idea and really make the most out of it. But in the end, these potential avenues for improvement serve to further highlight what a solid idea the Mystery Boxes really are. Hopefully at least one future Mario title will recognize the potential this idea has and give it another go.