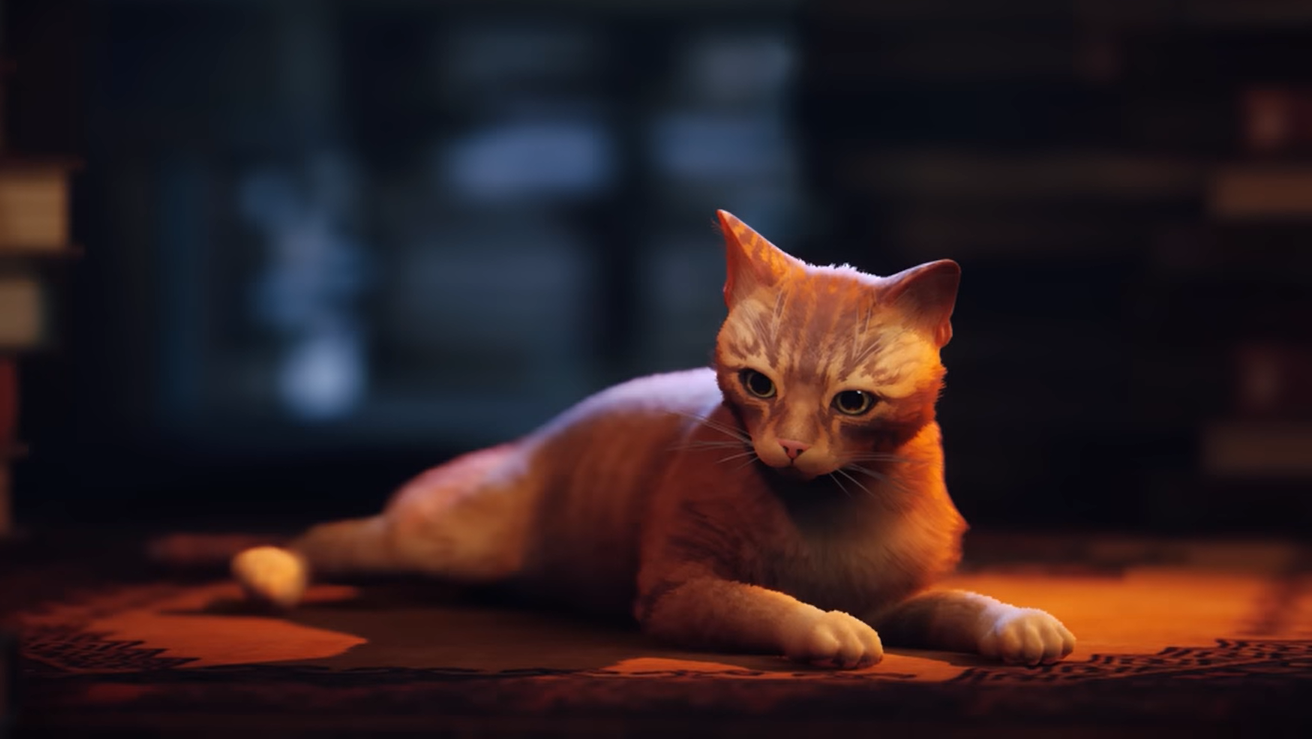 Last Thursday’s PlayStation State of Play showed off a number of exciting upcoming PlayStation releases, not least of which was a brand-new trailer for Annapurna Interactive’s STRAY, the upcoming indie adventure developed by BlueTwelve Studio about a stray cat that has to survive a mysterious world and make friends along the way. This isn’t the first time STRAY has shown off gameplay, as there is a narrated gameplay showcase from ten months ago, but this new June 2022 trailer shows off never-before-seen footage and a release date of July 19th, just over one month from now! For all the cat fans out there, let’s break down everything that happens in the STRAY release date trailer.

A Stray Far From Home

The trailer begins with a few shots of our feline protagonist navigating some dimly-lit streets, and one of the game’s robot humanoids can be seen mopping the floor in the distance. Upon seeing the cat approach, the robot stops ceasing its chores, steps back in fear, punches some kind of alarm on the wall, and flees the scene. Clearly, the stray cat isn’t supposed to be here, and this concerned citizen knows this all too well. What’s not made quite as clear is precisely what kind of threat the cat poses to the inhabitants of this city. Will the citizens face consequences for failing to report the feline incursion, or is that particular character simply terrified of the cat? The previous gameplay trailer revealed very little about the citizens’ attitudes towards the cat, apart from calling the city an “unfriendly” place, so it would seem to make friends is going to be harder than expected.

After the Annapurna Interactive and BlueTwelve Studio logos, we see another example of the mysterious city’s inhabitants fleeing in fear from their new stray visitor. This all but confirms that, for some unexplained reason, there is a legitimate sense of fear spreading among the population regarding the cat’s presence in this world. It’s entirely possible that cats aren’t generally seen in this region, which would explain why the robots hurry to hide away and close their doors. We then see a couple more shots of some beautiful scenery that fleshes out the dark gritty world of STRAY, including a subway station and a narrow alleyway. Nothing to analyze apart from some gorgeous world design, but much appreciated nonetheless.

The next shot is one of the most adorable in the whole trailer and is emblematic of much of STRAY’s appeal — its emphasis on having a realistic cat protagonist. The cat is seen licking and cleaning itself before staring into the camera with its vibrant yellow eyes, perfectly showcasing the importance of creating a feline character that behaves precisely as players would expect. These small details are a huge part of what makes the unnamed cat protagonist so endearing and cute, and the developers at BlueTwelve should be immensely proud of the result from this shot alone. Regardless of how compelling the rest of the game turns out to be, cat fans will rejoice at seeing this adorable little fellow’s realistic mannerisms.

The Stray Meets A Friend?

Armed with its fancy AI companion, the cat is now seen talking to one of the robot citizens using the AI as a translator. Here we can see the essence of the adventure gameplay that STRAY provides, including a button prompt to show items to the NPC as well as of course the dialogue box that lets players talk and learn new things from those around them. The robed citizen seems apprehensive, but is nonetheless the first vaguely friendly face seen in the trailer so far, and demonstrates that not everyone in this city will be unwelcoming to the protagonist’s adventures. The small details in this scene also reveal a surprising amount about the city’s culture, from the simple robes that the robot NPC wears to the painting on the wall of two humanoids holding hands. It’s a cosy vibe overall, and much friendlier than the harsh streets outside.

Following the short conversation with the Guardian is some footage of STRAY’s smooth parkour gameplay, with contextual button prompts clearly showing which surfaces can be jumped to and once again providing an opportunity to show off the realistic cat animations. The way our feline friend leaps across the rooftops is both elegant and satisfying to watch. The seamless transitions between surfaces look highly promising for delivering a smooth gameplay experience without any unnecessarily clunky animations that break the realism of the cat’s adventure. In contrast to the grim streets in the opening shots, this shows a more colourful and open area to explore, free from some of the hostility of the gritty world below.

Not only does the cat talk to friendly faces, but it gets to travel with them too! This charming scene shows a robot with a rainbow face rowing a boat through what looks like some kind of sewer, acting as a ferryman for the protagonist and aiding in its journey. Whether this is a reward for completing some kind of favour for the character is unclear, or if this is simply a common method of traversal that can be used to the player’s advantage, it nonetheless oozes charm. In a world full of spooky foes and frightened citizens, it’s nice to see someone being so kind and helpful to the stray cat.

Here’s where the adventure truly begins. It seems that items are hidden everywhere in the world of STRAY, and the key to solving the world’s puzzles and mysteries is to have a keen eye. In this shot, the cat has discovered a badge in the corner of a room inside what looks like a small refrigerator, and there’s a very obvious button prompt to pick up the item so it can’t be overlooked. This is good news in that it won’t be comically easy to miss items throughout the world, but at the same time, it has to strike a balance between hand-holding and allowing actual discovery by the players themselves. So far the execution looks sleek and convenient. The myriad cracks on the walls in this shot also go a long way to fleshing out the fairly gritty tone of the city.

The next two shots highlight the contrast between the light and dark sides of STRAY’s world. First is a shot of the cat carefully balancing on a metal beam suspended in mid-air bridging the gap between two ledges in the darkness, and following this is another look at the seamless jumping animations as well as the brighter colours of the rooftops. There appears to be a deliberate contrast between the dark underbelly of the city and the more colourful open environment of its rooftops. This is also a good opportunity for the game to show off its physics, with the metal beam reacting naturally to the cat climbing on top of it. This trailer is so far heavily emphasizing the traversal mechanics, which we can only assume are a core aspect of the gameplay and therefore are important to execute with finesse and precision.

The Stealthiest Stray Of Them All

While not every cardboard box in the universe is a reference to the Metal Gear Solid franchise, it’s admittedly difficult to avoid the comparison here. In a stealth mechanic shown off for the very first time, the stray cat must hide in the cardboard box to avoid being seen by a patrolling robot with a very clearly highlighted line of sight. This is an exciting addition to the gameplay that shows off more of the dangerous side of the world and the ways in which stealth can be used to the player’s advantage. Stealth in games often yields inconsistent results, so it’s nice to see something very straightforward here. There’s no ambiguity around exactly what the robot can see and how its sight can be avoided.

What follows from the stealth gameplay is precisely what many gamers will find most relatable — an example of what happens when you get caught. In this case, the result seems to be getting shot at by drones with laser guns. The threatening red light coming from the enemies is classic video game language for ‘run away from this!’ and this proves a larger point regarding how STRAY effectively utilizes colour and lighting to its advantage. The subdued grim-dark setting is immediately contrasted with the bright red light of danger and gives a strong sense of urgency. While the game is clearly not going for a horror vibe in general, this appears to be one of the more intense sections of its gameplay, as without the means to fight back our cat friend must simply flee to safety.

Our heroic feline finds itself in even more danger than before, this time under attack by mysterious blob monsters in a sewer, and is having to make good use of the game’s smooth jumping mechanic to reach safety. The nature of this threat is unknown, and it certainly contrasts with the robot drones from the previous scene, but in both cases, the method of success is the same — run! There appears to be some kind of growth on the nearby wall, suggesting that maybe these slime monsters are perhaps a diseased or mutated form of some other organism, but this could form part of a greater mystery waiting to be solved in the world of STRAY as the cat’s adventure progresses.

The Wonderful World of STRAY

The final shot of the trailer is a wide shot of an utterly gorgeous tower in the distance, with the cat slowly approaching in the foreground. This enticing shot gives a glimpse of some of the world that lies waiting to be explored in the game, and it certainly looks appealing. Once again the contrast between the darkness of the background and the warmth of the light in the foreground demonstrates that this will be a game of two halves. On the one hand, there will be some tense action and stealth gameplay in the depths of the world, but on the other hand, there will be a comfort to the serenity of the exploration. The full trailer can be watched below to see all these details and more.