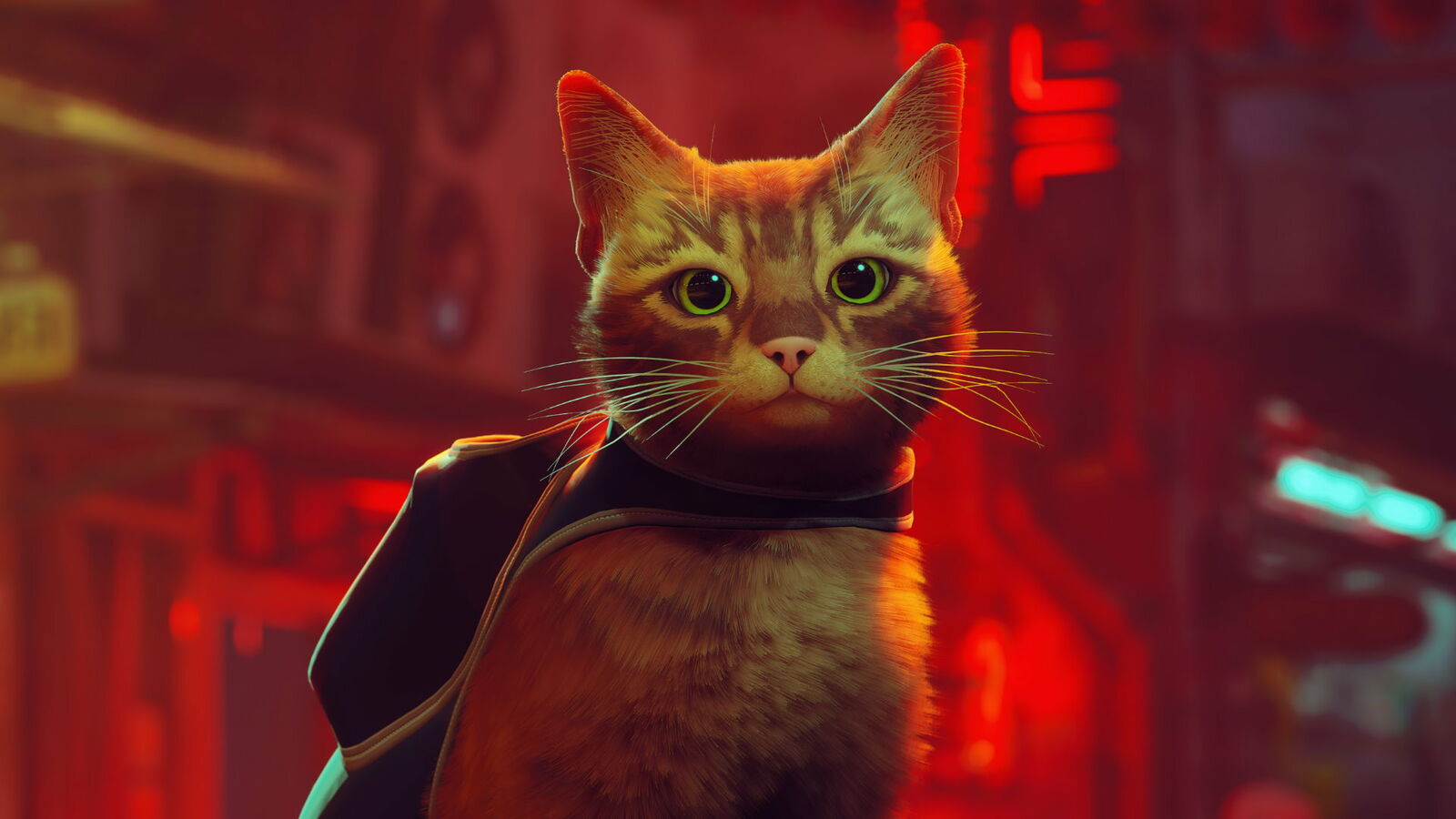 Ever since Stray was formally unveiled via a teaser trailer at PlayStation’s June 2020 Future of Gaming event, it became one of the most anticipated games of this generation. The appeal is easy to understand: who doesn’t want to control an adorable kitty as they explore a mysterious city? But Stray is more than just “the platforming game with the backpack cat”; it also features one of the most well-realized cyberpunk worlds of the last few years. Stunning art direction and immaculate vibes make Stray a journey worth savoring.

At its core, Stray is a 3D platforming game with some light puzzle-solving elements. In Stray, the player character is trying to escape the confines of an undercity and make it back outside. The only way in which the cat can do so, however, is by engaging with the robotic residents of the world. By sneaking into hard-to-reach spots, finding items, and presenting them to the right characters, the hero can progress to the next area as they climb closer to the surface.

The world of Stray feels incredibly mysterious as it presents an atmosphere that is simultaneously small and enormous. Urban areas are densely packed, reminiscent and comparable to the Kamurocho district from the Yakuza series. Alleyways are narrow and full of detail, and every resident feels like they have a distinct personality. From the eyes of a cat, it may seem overwhelming, but the player can take it all in stride. Cats are often seen as standoffish, but in Stray, the player character has the chance to be helpful and genuinely sweet.

The cat can jump, squeeze into tight spots, and digitize any useful items with the help of their drone pal. In specific circumstances and for a limited time, the drone can eliminate threats with a special flashlight, but ultimately, the cat never gains any other skills. The platforming is relatively simple, but Stray isn’t the kind of game to give the player more to tinker with in terms of mechanics. And though the puzzles are more or less extended fetch quests, they feel very well-designed and satisfying due to the environment and the storytelling told through debris and graffiti.

While it may hardly be action-packed, Stray manages to be incredibly compelling. What happened to the world is not exactly a concern of the cat, but it is certainly intriguing to the player. Early on in their journey, the cat encounters an AI consciousness named B-12 who has lost its memory. After helping the AI escape the confines of the network and upload into a new body, B-12 agrees to assist the cat on their way to the surface in hopes they can recover some of their lost memories. Finding these memories helps flesh out the world of Stray and teases the player with hints of what exactly occurred in the past that led to the downfall of humanity.

The world may be devoid of humans, but it is not completely empty of life and personality. Before leaving the planet or going extinct, mankind developed robots, initially as mindless servants. Over time those robots developed sentience and eventually their own society. The robots have hopes, fears, and genuine emotions as most of them are simply trying to survive. But a few believe that life can be different, that there are new opportunities beyond scrounging for fuel in the Slums. The outside world feels like a myth, at least until the hero cat falls into their laps after a traumatic separation from their pack. After tumbling down below the surface and into the slums, the cat is thrust into a world they know nothing about.

Despite its title, Stray focuses strongly on community. Gameplay focuses mostly on exploration and is at its best in populated areas. Not every NPC gives the player a sidequest or is integral to the plot, but everyone adds flavor to the world. The cat feels almost like a binding force, someone for the robots to rally around as they scrape by. Living in the Slums is dangerous, made even more so by one of humanity’s parting gifts: genetically-engineered monstrosities originally meant to eat and eliminate garbage called Zurks that prey on robots–and now cats, of course.

Stray is broken up into different chapters, and each one focuses on a new area. They vary in length, but the most interesting are the Slums and the Midcity, heavily populated zones where robots live, work, and play while our cat protagonist trots along. These areas are often where traversal is the most satisfying as there are dozens of nooks and crannies where the cat can stumble over B-12’s memories or find unique badges that display on their backpack. It is a genuine treat to simply lose oneself in a new area, made even more engaging by the lovingly animated player character.

As gorgeous and haunting as every new environment in Stray is, it truly is all about the cat. Like the silent protagonists that have come before, the cat is as brave and resourceful as any classic game hero. They are also unapologetically a cat, with all that entails. Cyberpunk and futurism as an aesthetic feel very fashionable these last few years, but all the neon and robots pale in comparison to just how lovingly the developers of Stray animated everything the cat can do.

Gamers love to know whether they can pet the dog in a given game, but Stray gives them a chance to solve futuristic mysteries using all the abilities and powers of a cat. That is, nonchalantly pushing things off a shelf, or scratching at a door until someone is annoyed enough to open it. The cat can meow to draw the attention of a patrolling security robot or distract Zurks, and can even make muffins on a rug (those who know, know). It is oddly joyous, even if many of these actions feel superfluous. Stray feels more immersive because the player can control how the cat interacts with their environment, right down to which robots they choose to nuzzle up against and where they fall asleep.

Producers and developers at BlueTwelve Studio went to great lengths to make sure that the cat’s motions and movements feel authentic to cat owners. It is safe to say they nailed it. Everything the player can do feels authentic, even in an unfamiliar, sci-fi environment. Also worth mentioning is the role haptics play in the mechanical experience. Though Stray is available on other platforms, using a Dualsense controller on the PlayStation 5 feels revelatory. Purrs reverberate through the speaker and the controller rumbles ever so slightly with every scratch of a piece of furniture.

There are calm places where the player can park the cat and enjoy the environment free from danger. The ginger tabby, curled up on a cushy pillow while neon lights flash outside the window, flicks its ears in its sleep. The camera slowly zooms out, lo-fi beats playing. Things feel safe, and peaceful. But at the touch of a button, the cat perks its head up, green eyes reflecting the ambient light of the cozy room, stands, and stretches. The camera suddenly zooms back in, and the journey continues. Players can even earn an achievement for having the cat sleep for an hour or more; since these places basically turn the game into a screensaver, it’s an easy one to earn.

These moments of tranquility are a perfect companion to the heavy themes of what happens to our world when we stop taking care of it or what to do when systematic systems of oppression grind down even our AI companions. Even in a world without humans, there are hierarchies and betrayals, secrets and lies. But the cat brings a little bit of hope to every interaction, and by the end of the game, might even change the way the robots live.

Everyone who has ever lived with a cat knows a few things to be true: they’ll sleep anywhere. They’ll jump on anything. They’ll scratch everything. And they’ll love you, in their own way, no matter what. Stray improbably captures this feeling. For a few hours, players can be a cat, and do a little good in a world that needs it.