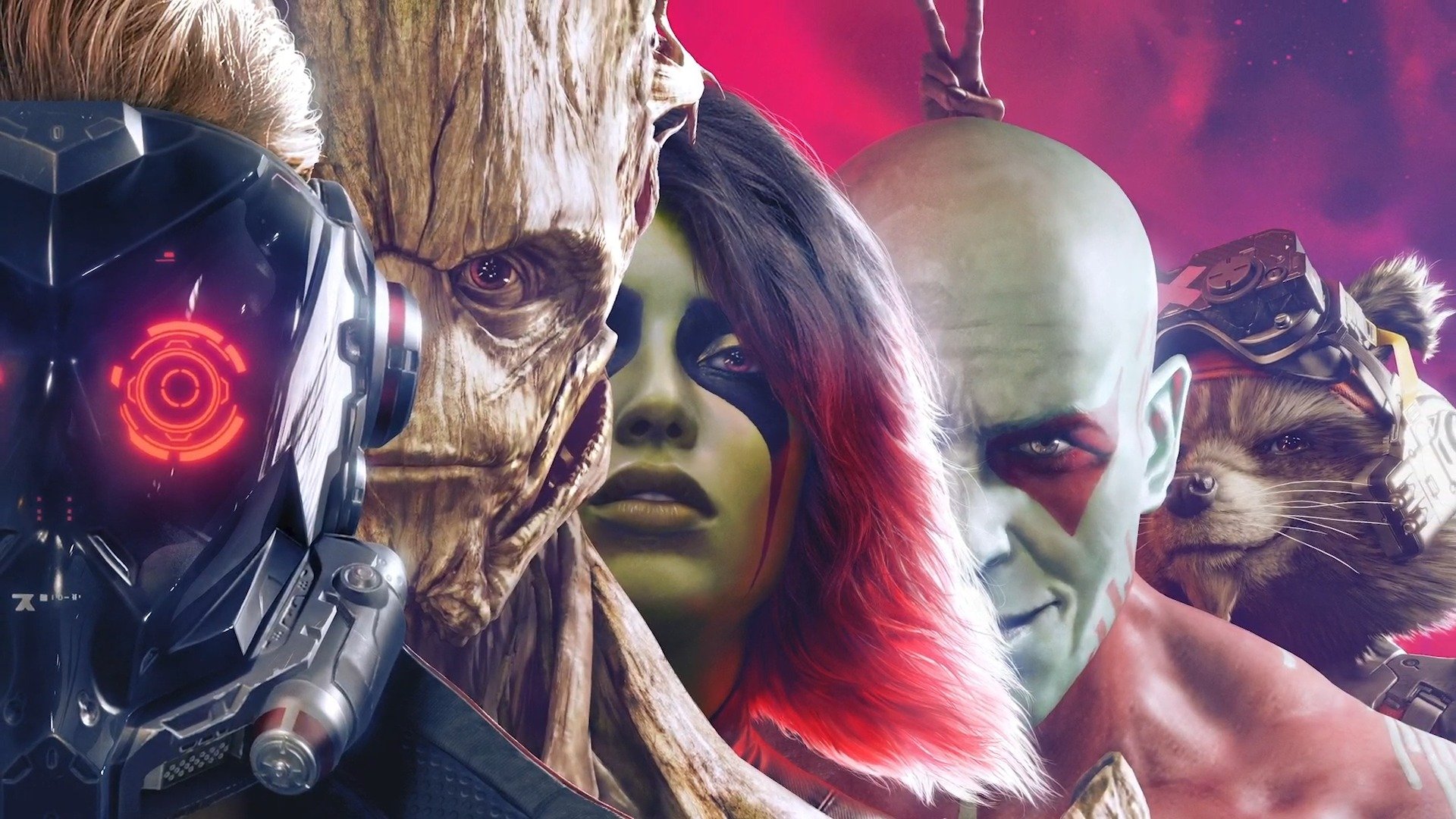 Square Enix focused a lot of time on their upcoming Marvel’s Guardians of the Galaxy game- being developed by Eidos Montreal- during the Square Enix Presents event (a quarter of the entire show was dedicated to it), presenting an eleven-minute gameplay demo that showed off how the combat works as well as dialogue choices, snippets of the narrative and the importance of music within the game. There was a lot on display and it seems that the developers are going all out with the game, but with the less than exemplary performance of last year’s Marvel’s  Avengers –also from Square Enix- is Guardians of the Galaxy going to be yet another flimsy cash grab or a genuinely fun and unique gaming experience? Let’s take a look at what we know about Marvel’s Guardians of the Galaxy and how it compares to Marvel’s Avengers so far.

All Images Courtesy of Square Enix and Eidos Montreal.

This is an element that Guardians of the Galaxy is offering but it was also promised and provided by Marvel’s Avengers. The single-player storyline was the most redeemable feature of Marvel’s Avengers but even that had flaws due to the repetitive nature of the gameplay (even if the combat itself was diverse and fun). Planning to focus the game on the narrative is always a plus in my opinion, as I am a person who will play a game purely for the story. That isn’t to shame video games such as Overwatch, Fortnite, and Call of Duty: Warzone (Overwatch was the first non-narrative based game that I got super into) that are more about the gameplay and online content, but story-driven games seem like the perfect fit for superhero properties such as those that come under the Marvel banner. Just look at Marvel’s Spider-Man from Insomniac Games. It was the perfect blend of an interesting story and fun gameplay. The campaign for Marvel’s Avengers was without a doubt its strongest element and so I think that a narrative-driven Guardians of the Galaxy game can only be a positive.

Marvel’s Avengers could also be played online and locally with others via co-op but Guardians of the Galaxy is forgoing this all together, opting instead for an entirely single-player experience with no online options. There is no local co-op either, with the focus being on the single-player experience in the same vein as Marvel’s Spider-Man. I personally think this is an incredibly encouraging choice for the Eidos Montreal team to have made. As much as online content and features can elevate a game and heighten the single-player aspects of it, this was not the case with Marvel’s Avengers. Whilst the single-player campaign was praised, the online multiplayer was thought by many to be repetitive, boring, and often frustrating loot grinding with many of the levels being the same “go here, fight this many bad guys, move on” set up and level designs that are clear copy and paste jobs. It isn’t by any means a bad game, I just feel like it defines a lot of what is wrong with the big-budget, triple-A video game studios, and the need to keep bleeding the player dry with loot boxes and online content rather than making a genuinely fun and enjoyable video game. Whilst it is arguable that Guardians could benefit from multiplayer- perhaps only local if not online- I think this is an interesting choice that will hopefully pay off.

Only One Playable Character

One of the more surprising elements of the game is that only one of the Guardians will be playable: human-born schmoozer Peter Quill a.k.a Star-Lord. Again, this is a decisive choice from the Eidos Montreal and Square Enix team, as the Guardians of the Galaxy are known for their roster of five characters, all of which are different aliens with their own quirks and personalities. So with all this variety, why would you choose the one human to be the playable character? Well, Quill is technically the leader of the Guardians and his perspective on the narrative could be closer to what we the player might feel, due to him being the lone human. Another strong point of Marvel’s Avengers was the different play styles of the Avengers, with the player being able to take on the roles of various Marvel heroes during the game such as Iron Man, Thor, Hulk, Black Widow, and Captain America. Each has a different feel as you play as them.  It could be argued that limiting the game to one playable character (although the gameplay demo showed how you direct the Guardians during combat and utilize their individual powers and abilities) might be a negative point, but I would argue that it keeps things grounded. By focusing on the one playable protagonist, you not only keep things focused- without the risk of overstuffing and confusing the gameplay- you can also put yourself into the shoes of the character more so than if you are constantly switching through playable personalities. Avengers did manage to pull off the multiple playable characters trope pretty well, but I am glad that Guardians of the Galaxy is opting for something different and a little more personal.

Thinking about Quill himself, his character across the various media forms- be it the comics or the films- is charming yet arrogant but with a genuine sincerity about him. My only hope is that this version of the character maintains that cocky, playboy space explorer persona that he is known for whilst also staying likeable. A likeable character is essential, seeing as that is who your player will be in control of for the whole game. There is nothing worse than playing as a character that you can’t stand because it is really hard to want to succeed in what you are doing.

I want to stress again that Marvel’s Avengers is by no means a bad game but it is certainly one that was bogged down by the online elements, the loot box system, and the mediocre multiplayer aspects. Guardians of the Galaxy is stripping away all of the online and multiplayer elements, which speaks volumes for the way that Square Enix clearly want to change up their Marvel video game properties. A lot of people online had much to say when Marvel’s Guardians of the Galaxy trailer dropped- from mocking the character designs to taking aim at the lack of multiplayer and no choice to play as the other Guardians- but personally, I love the direction that this game seems to be taking. I particularly enjoy the idea of incorporating music into the gameplay mechanics as that suits Star-Lord’s character so well (even if it might be a problem for streamers getting copyrighted but hopefully they will find a loophole for that somewhere). That being said, I felt positive about Marvel’s Avengers too. However, the lack of online money-grubbing tactics is something to be admired and I think it can only be a good thing for Square Enix’s Guardians of the Galaxy game.

Marvel’s Guardians of the Galaxy is releasing October 26th for PlayStation, Xbox and PC. Make sure to check out the press release for the game below.

SAVE THE UNIVERSE (PROBABLY) WITH MARVEL’S GUARDIANS OF THE GALAXY

Play as Star-Lord and Experience an Original Guardians of the Galaxy Story on October 26, 2021

MONTRÉAL, CANADA (June 13, 2021) – During the SQUARE ENIX® PRESENTS digital-showcase event, Eidos-Montréal and SQUARE ENIX today unveiled Marvel’s Guardians of the Galaxy, a bold third-person narrative action-adventure game that combines original storytelling with electrifying single-player gameplay. Developed by Eidos-Montréal in collaboration with Marvel Entertainment, Marvel’s Guardians of the Galaxy will release simultaneously on the PlayStation®5, PlayStation®4, Xbox Series X|S, and Xbox One consoles, and on PC, and streaming via GeForce NOW on October 26, 2021.

Fire up Star-Lord’s jet boots for a wild ride across the cosmos in this fresh take on Marvel’s Guardians of the Galaxy. With the unpredictable Guardians at your side, blast your way from one explosive situation to another, with both original and well-known Marvel characters caught in a struggle for the fate of the universe. You got this. Probably.

“The Eidos-Montréal team is honored to have the opportunity to work on such an iconic franchise alongside our trusted collaborators at Marvel Entertainment,” said David Anfossi, Head of Studio at Eidos-Montréal. “Our teams are known for revisiting IPs and bringing their own twists and craft to the stories and the art surrounding them. As you will experience, it’s no different for Marvel’s Guardians of the Galaxy.”

“A distinct mix of sci-fi, family drama, and rock n’ roll attitude with an edgy aesthetic is the foundation for our Guardians franchise”, said Jay Ong, EVP, and Head of Marvel Games. “We are thrilled to collaborate with Eidos-Montréal knowing they are the team that can deliver on this core promise. The team’s laser-focused vision for our beloved band of misfits shines in Marvel’s Guardians of the Galaxy. We are excited for our fans to play it this October.”

Master Star-Lord’s dynamic combat style to obliterate foes with his Element Blasters and call on the unique abilities of each Guardian to defeat a wild variety of interplanetary enemies. Also, as the self-proclaimed leader of the Guardians of the Galaxy, players will engage in select player-choice driven dialogue and interactions between Quill and the Guardians that further strengthens the bonds within this dysfunctional family.

Finally, Marvel’s Guardians of the Galaxy wouldn’t be complete without a killer soundtrack to rock out to while soaring through space in the Milano. The game is jam-packed with classic 1980s hits and kicking original tracks.

Marvel’s Guardians of the Galaxy will be available on PlayStation®5 console, PlayStation®4 console, Xbox Series X|S and Xbox One consoles, and PC digital, and streaming via GeForce NOW on October 26, 2021. Pre-orders are available now for the Standard and the Deluxe Editions. For full details on pre-order items and more information on Marvel’s Guardians of the Galaxy, please visit the official website and follow us on social networks.