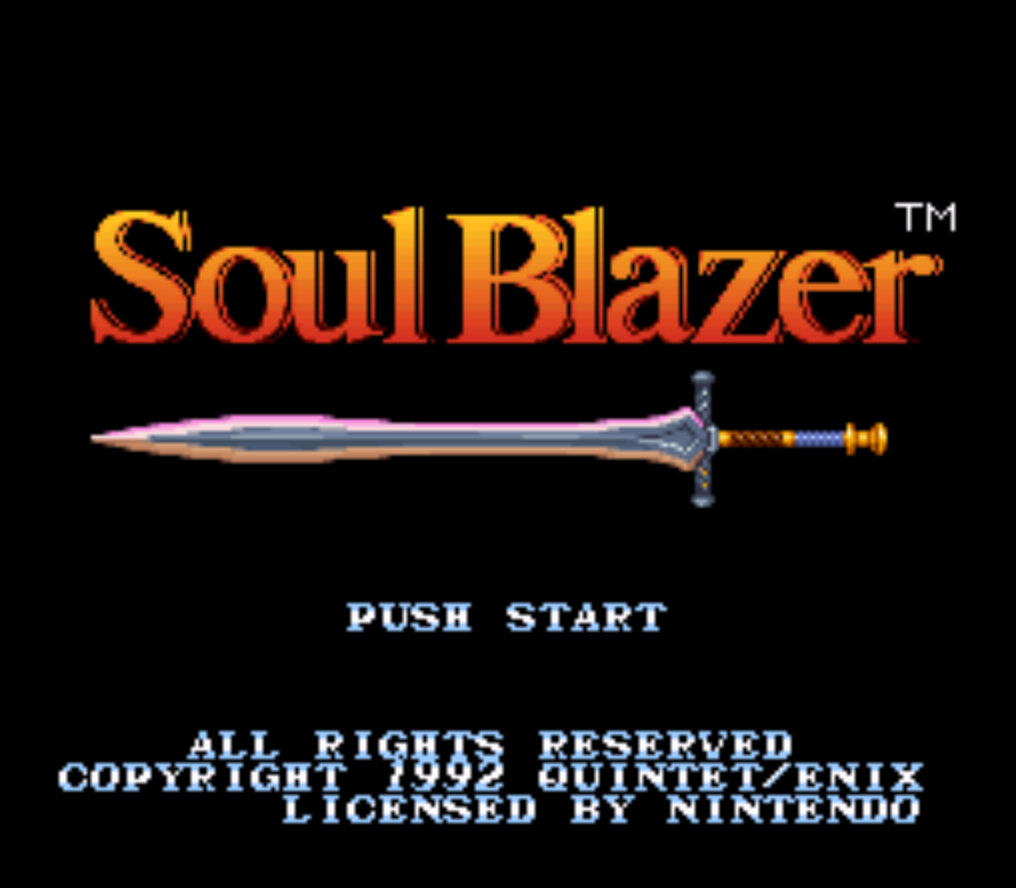 At first glance, Soul Blazer doesn’t leave much of an impression. After all, the Super Nintendo was never in shortage of top down action games. The Legend of Zelda: A Link to the Past, Secret of Mana, and even Soul Blazer’s sister game, Illusion of Gaia, catch the eye quicker than Soul Blazer every could. There’s a very isolated quality to Quintet’s sophomore outing. At the same time, it’s exactly this quality which makes Soul Blazer so compelling. On a platform so full of life, in a genre that— at the time— was so intent on creating full worlds, Quintet opted for an RPG completely devoid of life.

Starting up, the world is empty. There are no NPCs littering the overworld, there are no shops, and the only guiding point the player has directs them below the surface to slay monsters. Death has taken its toll on the land and left nothing but nature itself in return. Much of the game’s introduction is slowly spent showing the scope of death. Humans have died, animals have died, and plants have died. It is the onus of the player to reverse death and restore life to the land. For as morbid and twisted as the premise is, an easy to overlook opening actually shines light on the rest of the experience.

Soul Blazer’s frankly casual opening won’t elicit much emotion, but Quintet’s depiction of death and rebirth is not an emotional one. Rather, the introduction serves to showcase death as a natural part of existence. It isn’t so much that death is unavoidable— a fact the story does linger on quite frequently in passing— but that death often occurs without much fanfare. Truly, the opening cinematic grants no fanfare to how the world ends, instead stating it in a matter of fact manner, an approach Soul Blazer is quite fond of.

It can be easy to dismiss Soul Blazer’s casual approach to such a hefty subject as a sign of the times, an indication that developers weren’t quite treating their stories with as much respect as they should or could, but that would be a gross misunderstanding of the narrative’s style. Considering how matter of fact death is depicted, a more sensationalized or romanticized depiction would fly in the face of the core themes at play. The one major death that occurs on screen won’t strike up any tears, but that isn’t its purpose narratively. Soul Blazer is a title that takes the emotion out of death to show it in its purest form.

It’s fitting, then, that players take control of Blazer, a character who cannot die. Divine in nature, Blazer, too, is devoid of emotion, simply existing as an arbiter of life. In order to restore life to the world, Blazer must kill swarms of enemies in order to reclaim lost souls. Appropriately, enemies who breed new life do not respawn, instead remaining dead for the rest of the game. Death’s permanence isn’t shown through the player character, but through enemies.

Which, in turn, is a strange approach for an RPG. In a genre that often features grinding, said approach to game design effectively locks players from progressing further than they’re expected to. While not every enemy stays permanently dead, the ones that do respawn tend to offer the bare minimum in terms of EXP, hammering in the idea that death is omnipresent. If nothing else, the fact that only the loss of life can lead to the restoration of life makes for a powerful frequent concept in the context of Soul Blazer.

Although some NPCs return to life specifically to aid the player on their quest, most simply exist for flavor text. They don’t advance the plot, they don’t bestow the player with newfound power, and they don’t lead the way to a new area. They only exist for their dialogue. Where the majority of NPCs fail to linearly progress the game, they almost always expand the core theme of death. A character may lament about the finality of life. Another might take bliss in the idea that, despite their imminent death, they have no qualms as they live each day to its fullest. Some might just comment on the suffering that goes hand in hand with living.

What makes these moments powerful isn’t an emotional center or character attachment— in truth, even the most unique NPCs are as bland as they get— except in the candidness with which they discuss death. Death is a casual subject, one that almost feels inappropriate when compared to other games from the era. There is a distinctly mature approach to the script. Soul Blazer is comfortable in its subject matter in every respect and wants players to understand the sheer scope of death. Even though much of the game is spent reversing it, there is never a moment that shies away from reminding audiences that they will die.

With that in mind, what does it mean to die in Soul Blazer? As a game about death, it’s only fitting to break down how death is fully represented. Gods clearly exist in the world of Soul Blazer, but there does not seem to be a conventional heaven or hell. Reincarnation exists and is a natural course of life, but one’s memories don’t follow. Death is cyclical in a sense, coming and going like an ebb and a flow. When one’s life dies, another is born (or reborn.) Perhaps the most interesting approach to death comes through the Gnomes.

The wardens of the fourth area Blazer visits, the gnomes are born, live, and die within a single year. Spending time talking to said gnomes shines lights on their struggles, or lack thereof. The recurring thread tying the gnomes together is the fact that their culture openly embraces the idea that they will die within a year. With only one year to live and die, the gnomes choose to live their lives as blissfully as possible, taking comfort in their fate and pursuing their passions. It doesn’t matter that they’ll die in a single year. What does matter is that they choose to live as much as possible.

Life’s fullness isn’t tied to time, at least not in Soul Blazer. More time seems like a natural blessing, but the gnomes are proof that life can be fulfilling regardless of how much time is lived. This is a concept the final boss directly comments on, suggesting that Blazer’s eternal life is nothing short of misery. For as much time is spent reversing death, Soul Blazer wants its audiences to understand that death is by no means bad. It almost seems paradoxical, then, that the premise of the game is more or less a revenge story against death itself, but that’s fitting when taken into account the varied depictions of death.

It only makes sense to rebel against death, and who better to rebel than the person holding the controller? Soul Blazer is not a particularly difficult game, but players will still likely die at least a few times on their journey, another inevitability. When a player dies, loses, or gets a game over, the natural response is to overcome said failure. If the premature death of the world in Soul Blazer is a failure, it only makes sense that the core gameplay premise will resonate with anyone familiar enough with the medium. Soul Blazer’s story could be told in any medium, but only a video game medium showcases the weight and scope of such a premise.

Which more than makes up for the cold approach to storytelling at play. Regardless of how deliberate Soul Blazer’s presentation is, audiences naturally resonate more when they can directly relate to the characters and conflicts at play. Even other RPGs from the time were already playing up more traditionally gripping narratives. Just a year prior, Square released Final Fantasy IV, complete with full character arcs, an emotional center, and more than its fair share of plot twists. Soul Blazer, by comparison, doesn’t come off in the same league.

At the same time, it isn’t trying to and that in itself is important to recognize. Soul Blazer didn’t follow the trend of increasingly dramatic RPGs. Rather, Quintet saw an emphasis on narrative rising and chose to embrace the style and little else. At the end of the day, the plot is hardly the most important aspect of the narrative. What gives Soul Blazer pathos is the casual philosophies NPCs are more than happy to share. Life may be impermanent, but that hardly has to be a bad thing.