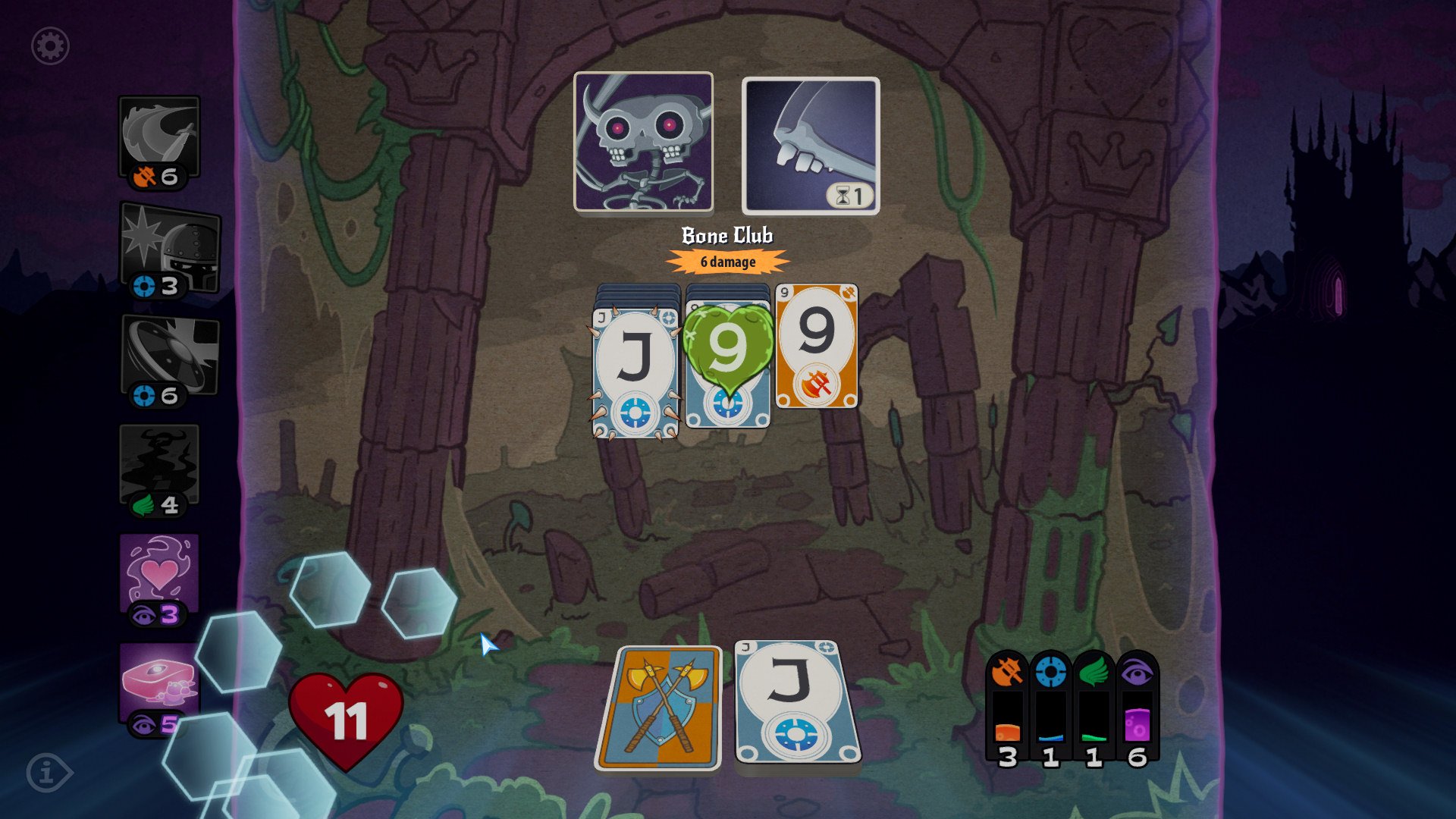 Interesting crossover games always intrigue me. I was incredibly curious (and briefly addicted to) Puzzle Quest when it first came out, which combined match-three puzzle gameplay with RPG mechanics and character progression, and I would likely have taken a deep dive on Pocket Card Jockey, a game that tasks players with matching cards as they race horses, if horse racing wasn’t a morally bankrupt institution. Thankfully for me, Righteous Hammer Games decided to create their own spin on the solitaire-crossover.

Solitairica pits players against a variety of simple opponents with whom they duke it out over playing cards. It makes claims about a “roguelike progession system” which may be somewhat overstated, but does offer a semi-random series of battles through various environments up to a final confrontation. The randomness comes from the enemies fought, the spells and items made available between battles at the shop, and of course the cards themselves. Managing spells and dealing with enemy skills while matching cards is the core of Solitairica’s gameplay.

The basic premise is simple and fun. The card suits come in four flavors of energy, and this energy is gained by successfully removing cards from play in a style somewhat typical of Patience variants—match any cards, regardless of suit, either numerically up or down, to get them off the board. The goal is to remove all the cards from play, which act as both the player’s source of energy and the enemy’s health. Once enough energy is gathered, spells can be cast which have a wide array of different uses, from attacking and removing cards in various ways, to healing your hit points or adding armor (lose all your HP and it’s game over), to stunning the enemy or adding extra turns to the cooldowns of their abilities. These spells are purchased using gold, which is earned through combat, but the selection available to buy is randomized between each battle. Trying to build a deck of spells and items to best deal with various situations is fun and satisfying, though the random selections can make it hard to wrangle the most perfect spell combinations.

Players begin by selecting a starting deck (though only Warrior is available at the outset), then attempt to get as far as they can in contests against various enemies. These come with random modifiers that vary them slightly from encounter to encounter, but the play itself is straightforward. Tactical considerations come from carefully selecting different items and spells for each individual battle, trying to get the energy needed during the fights to continue using spells to best effect, and being careful to avoid the variety of enemy skills that will be brought to bear any time a play can’t be made. Turning over that new card in your deck to try again counts as the end of a turn, giving enemies a chance to draw ability cards of their own. The shop lets you gear up and get new spells, which changes the way matches play out.

It all works well, and the game presents its cute art style with plenty of visual aplomb, though music and sound are largely forgettable. Special effects are simple and pleasing, though never particularly impressive, which works in the game’s favor. Solitairica never gets in its own way, or in the way of players looking to simply enjoy a few rounds of cards.

The game’s biggest problem lies in the fact that it doles out rewards too slowly. The core game is fun, but ultimately somewhat repetitive, and persistent rewards that carry between games only come after a run has been finished, successfully or not. When players are defeated, a special currency is awarded which can be used to upgrade existing decks by adding effects to certain cards, or entirely new decks can be purchased instead which have a few unique cards that focus on different energy types. Yet this currency drips in at probably half the speed your patience may support, which is a shame, as the slight changes in gameplay provided from the card buffs and new decks help freshen up the gameplay from game to game. If they came more quickly and consistently, they’d go a long way toward keeping players engaged for the long haul. Enemies come in a variety of flavors, and modifiers change each match as well.

On the whole, Solitairica is a great little game that sets out to do something very specific, and it does it well. The scope may be narrow, and its rewards may require a little more persistence than some players will be willing to give it, but it should appeal to anyone who wants to add a few layers of complexity to the quiet, enjoyable pastime of solitaire. It provides a fair challenge, and while randomness will occasionally lead to a frustrating loss, the simple act of playing cards and calculating small probabilities is a great fit for this lighthearted world of magic and mischief.