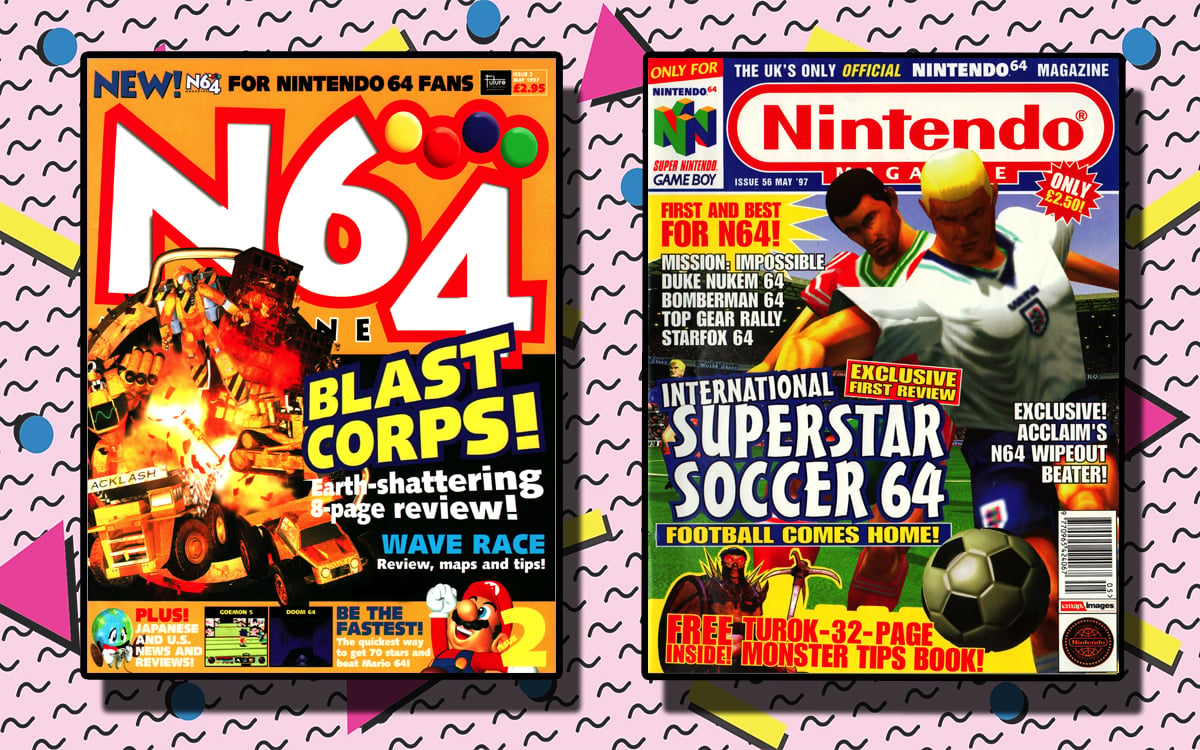 May 1997 was only month three for the Nintendo 64 in Europe, and already was its launch fully overshadowed by yet more price drops in other markets. Following on from last month’s drop in Japan, the US – despite having sold more than two million units since launch – was also about to shed $50, with the price falling to $149.95 (while we Brits were still having to pay £250). The key reason, states Nintendo Official Magazine (NOM), is to gain price parity with the PlayStation and Saturn.

Those competing consoles’ adoption of CD-based games was also putting pressure on Nintendo to lower cartridge prices, as they couldn’t afford to fall behind even further after launching the console later than everyone else. Rumors abound of a UK price drop following suit in the coming months – something that would be almost unheard of so quickly nowadays.

The price wasn’t the only change on the cards, as my confusion from last month was neatly tied up thanks to NOM’s reporting of a renaming of the Jolt Pak to the Rumble Pak – a little tidbit I had previously been unaware of. Of course, the first game to use the Rumble Pak would be the upcoming Star Fox 64 – another beneficiary (or, in this case, victim) of some virtual deed-polling, as it would soon be forced to change to Lylat Wars over here in Europe thanks to its similarity to the name of German company ‘StarVox’.

Speaking on the subject of things I’d never heard of before, NOM reports on a ridiculously cool initiative set up by Nintendo of Japan they called ‘Nintendo Swop Shop.’ I have scoured the internet for this since reading the news here and have found absolutely no mention of it anywhere, but apparently from summer ’97 Nintendo would be running a Super Famicom game exchange system. You’d buy a blank SFC cartridge for 5000 yen and could then copy any new games for 1000-2500 yen (rather than the 3000-6000 the original games cost) as many times you like at stores like Toys-R-Us. With a reported 10,000 stores signed up, I can’t see that it would have been scrapped, but I’ve never seen any copied carts out in the wild – even in Tokyo.

Tokyo had also just hosted the Far East’s biggest gaming event in early April – the Tokyo Game Show. N64 magazine regretfully reports that N64 owners were barely catered for at the event, with Nintendo deciding not to show up at all. There were apparently ‘only around 25 new N64 games’ at the show compared to, ‘the PlayStation [accounting] for about 45% of the 459 games on display,’ and the Saturn at 31%.

The list of N64 games on show at TGS does not make for particularly exhilarating reading either. N64 Mag lists titles like Aero Gauge, Battle Dancers, Wild Choppers and Mahjong Classic in what I would describe as the Irrelevant Section, but they did have good things to say, rightly, about Go Go!! Troublemakers (later named Mischief Makers in the west) and, wrongly, about Castlevania 64. The magazine describing the future flop as, ‘dripping with gothic atmosphere’ and noting they’d ‘placed [it] near the top of our Eager Waiting list’. Those poor, wide-eyed fools.

Waiting wasn’t needed for the magnificent Wave Race 64, however, as N64 ran with it as their big review of the month. A tongue-in-cheek peek behind the curtain hints at what must have been a regular frustration in the age of purely print media, as the game’s incredible water effects don’t easily translate over to small screenshots. On pondering how to get said effects over to readers, the mag poses, ‘short of cover-mounting a small sachet of brine, with instructions to spray its salty wetness across the brow while sitting on a friend’s revving motorbike reading the issue, we drew a blank.’

We all know how good the waves in Wave Race 64 were – ‘they break, they rise, they ebb and flow’ – but the character animations were also key to its impressive visuals. Last issue’s Champion of Words, Zy Nicholson, eloquently puts it best, ‘your actions are perfectly represented on screen by the twisting, leaping ski and its subtly animated rider … you’re actually able to perceive the turbulent effect on your speed and steering and to compensate accordingly with a gentle shift of the thumb.’

The game scored a 90%, with Zy rounding it off stating, ‘Wave Race parallels the ground-breaking brilliance of Super Mario 64 in a way that Mario Kart 64 doesn’t. Unless you’ve actually seen it and played it for yourself, you won’t truly comprehend a 3D gaming experience that’s only possible with dedicated 64-bit hardware.’

Secondary in praise to the brilliance of Wave Race was N64 Mag’s cover game – the Rare-developed explode-‘em-up Blast Corps. If that’s a description of the game’s genre on my part, you can put your pitchforks down because it’s Nintendo and Rare’s fault. Apparently claiming they’ve created ‘an entirely new genre of game,’ the review notes ‘it’s this inability to be labelled that makes Blast Corps so immediately appealing.’ Reviewer Jonathan scored the game at 88%, calling it ‘inspiringly original, and fun from start to finish,’ despite also noting he ‘got frustrated from time to time … a couple of times I said some rude words.’

Undeniably increasing frustration would be the infamous FIFA 64 – made to look even worse in the wake of the imperious football champion of the previous month, ISS 64 (which NOM gave 93% this issue after N64 handled the JP import last time). NOM decry it as ‘one of the biggest disappointments in the history of videogames,’ its 67% score punctuated by stating that, ‘if ISS 64 is a Premier League title, this would struggle to compete in your local Sunday morning league.’ Trust me, I used to play in those, they’re terrible.

N64 mag notes that the poor quality is likely because ‘much of what made FIFA ’97 on the PlayStation so disastrous remains in this N64 incarnation.’ Nintendo consoles getting lazy versions of FIFA games? Turns out that’s been going on for over 20 years. As mentioned last time, N64 Magazine is enamored with the lower half of its scoring pyramid like no other, apathetically tossing out a dismal 39% to this shower of soccer shite and signing off with ‘the more you play, the more you realise how thoroughly dreadful things are.’

Interview With a Legend

Rounding off the issues, there’s just time for a pretty wild interview with Shigeru Miyamoto, who gave a lot of insight into that big ol’ brain of his, although some of his thoughts don’t seem all that prophetic in hindsight. The great man admitted that Japanese users didn’t see cartridges as viable compared to CDs, although he naturally remained defiant that Nintendo had proven there was life left in the older medium. Expanding on this argument, he also felt that musicians disappointed with the lack of CD-quality sound capabilities on N64 should ‘brush up their skills in producing interactive music, and eventually technology will allow [the N64’s] type of sound composition to match today’s prerecorded music.’ Erm… no?

He also said he expected players to ‘master’ the N64’s analog stick after two hours’ playing time, casually threw out the phrase ‘two-and-a-half dimensional game’ when talking about Yoshi’s Island (way before I’d heard that used before), admitted he doesn’t play many games himself, and absolutely blanked Sony’s existence when asked about Nintendo’s competition in favor of spitting some serious flames on Sega. ‘Unfortunately, our competitors seem simply to try and imitate the surface and just end up making very badly balanced games,’ he says, ‘[Sega] imitates Nintendo and tries to produce research and development on products that Nintendo is going to sell … Sega is always thinking in terms of the market.’

And on that bombshell, it’s time to close the pages on another dive backwards in history. Next time we’ll take a look at June 1997 to revisit what the reviewers of the day had to say about Star Fox 64.