First-person shooters had been out a long time before Rare’s Goldeneye 007 came along and were already popular in college dorms via LAN or kids whose parents allowed them to play games on the family PC, but for the rest of us dependent on our dedicated consoles for our gaming entertainment, the particular charms of running and gunning in more than two dimensions were lost. Navigating a 3D space was a challenge for controllers limited by a d-pad and six buttons (try playing Doom or Wolfenstein 3D on the SNES). With the N64’s analog stick and c-buttons, however, developer’s were able to actually make the concept enjoyable, and though several shooters had released earlier, like Turok: Dinosaur Hunter and Doom 64, it was really Goldeneye 007 that ignited massive interest in the console shooter, and shares a large part of the credit for the genre’s enormous appeal today. Not bad for a game originally planned as both a side-scroller and an on-rails shooter.

Of course, the multiplayer was largely responsible for this, and Goldeneye was just another reason why the N64 was THE party console. How else could four friends sit around a television and hunt each other down like the most dangerous game that they were, popping off headshots (with the help of the extremely generous auto-aim) and navigating labyrinthine corridors, ganging up on the most skilled (or lucky) player out of pure spite. Goldeneye required no internet connection (a strange, exotic thing in 1997)- just knowing three people who liked either you or your games enough to come over and play. And thus, a mass of gamers were introduced to what all those college LAN kids had already figured out: shooting each other is as fun. As long as there aren’t any Odd-Jobs. 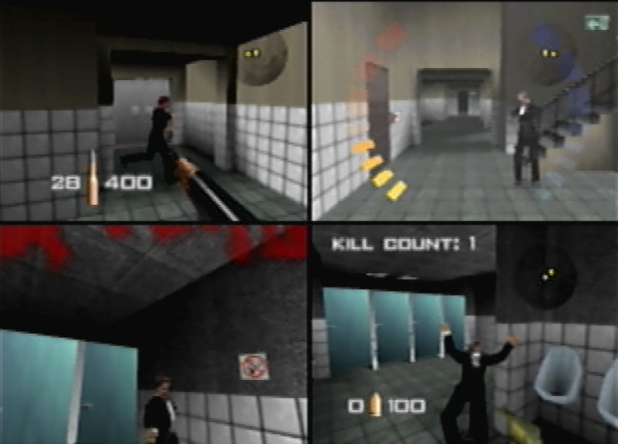 No, you don’t need glasses. This is how the game actually looked on most TVs.

What makes Goldeneye 007 stand out even further from the competition, however, was something that first-person shooters today could take a note or three from: a deep, compelling campaign. Sure, I loved screaming at my friend who kept beating me about how surely he must be cheating, throwing my controller down in disgust, and vowing to never play another match with him ever again, but sometimes I play games for different reasons than anger, and so it was really nice to have a way to relieve stress instead of cause it. Goldeneye‘s campaign was ultimately why I kept coming back, to explore a world that looked just like the one in the movie, to try out the different difficulty levels that added extra objectives, and to once again sneak through the air vents and hear the satisfying “thump, thump” as my silenced Walther PPK dispatched some poor Russian soldier sitting on the toilet. Seriously, I would often hit the restart button just to do this again. And again and again.

I loved everything about Goldeneye at the time; everything played so natural. Zooming in on some unsuspecting sap with the sniper rifle was a revelation, inspiring a horde of annoying campers to this very day, levels were designed using various patterns and colors to ensure players unfamiliar with the perspective wouldn’t get lost, and even all the various gadgets, like timed mines or the laser watch all worked great, giving the game that real “spy” sense. And the tiniest details were burned into our brains, like putting a bullet in different body parts to elicit different animations, from hopping up and down on one leg to a gentle sail to the ground. Of course, those impressions are time-stamped, based on memory, and may be slightly rose-tinted. To the modern gamer Goldeneye 007 will feel archaic and nearly unplayable, limited to only one analog stick and those awkward c-buttons. But without it, the first-person console shooter may not be what it is today.

For more thoughts on Goldeneye, check out our NXpress Podcast review of the game.