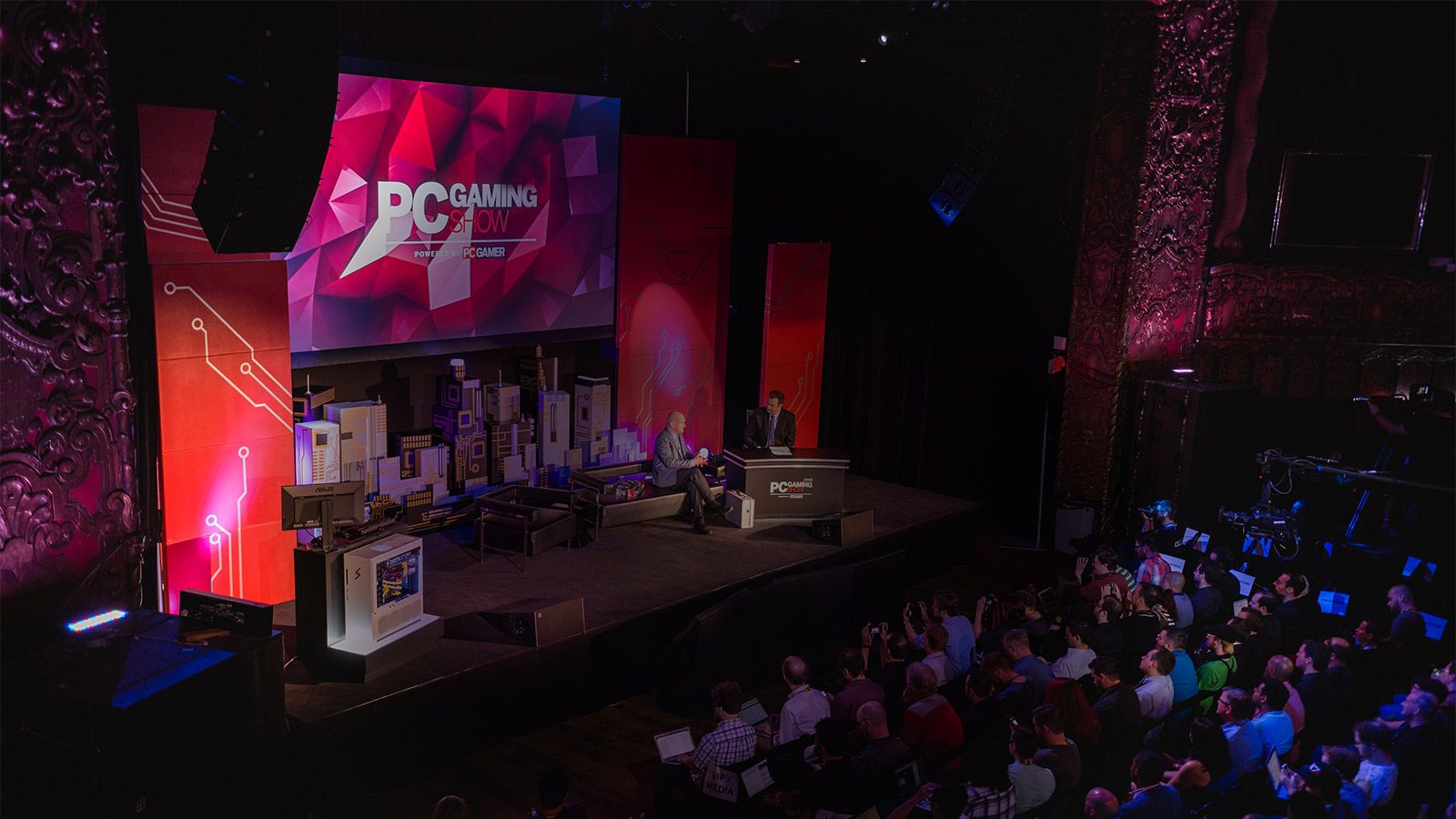 Like Bethesda before it, PC Gamer and AMD made a second outing at this year’s E3. Here’s a rundown of everything they announced.

Starting the show was the world premier of footage for Dawn of War 3, as well as an interview with the developers of the game. It seems like the game seeks to meet a middle point between DoW 1 and DoW 2, mixing base building and massive armies with the tactical movement and strategy of the two games. Also shown off was the new Titan unit and a tease for the Space Marine’s orbital weapon.

After that we got a brief look at Oxygen Not Included. Based on the fact that it’s from Klei and the short trailer showed off space-based survival, expect a mixture of Don’t Starve and Space Colony.

Following that we got new info on the future content for Ark: Survival Evolved. The dinosaur-based survival is going to add a new biome type with trees to allow for tree forts, as well as a new dinosaur so big you can build a base on it. Also announced was the integration of some of the game’s most popular mods, now officially sponsored content. Dawn of War 3, one of the most anticipated games and a great way to start the show.

Then we got a brief look at Giant Cop, an upcoming VR game that sees you as…a giant cop keeping the peace. It’s kind of all in the name, but the short trailer implied a darker alien operating in the background, never mind shutting down hippies with a gas truck. Laughs all around.

Then was a look, finally, at Mount and Blade 2: Bannerlord’s gameplay, mostly showing off the new siege gameplay. Players will be able to control siege engines like catapults this time, as well as battering rams alongside the signature melee combat we loved from the first game.

We also got a quick look at The Surge from the team behind Lords of the Fallen. It’s another Dark Souls-type game, but this time in space. Lords of the Fallen was an honest to god attempt to ape the action-RPG gameplay, so maybe a completely different setting will help the team find their own feet.

After that was a look at Lawbreakers, the new game from Cliff Bleszinski. Lawbreakers is yet another hero-based shooter in the vein of Team Fortress 2 and the recent Overwatch, with players moving around a map shooting each other. When asked about Overwatch, Bleszinski remarked that Lawbreakers has a more mature feel to it. Whether or not it has the stones to take on Blizzard and Valve will be seen when the open alpha kicks off June 18.

The show then took a break from the games to bring out show sponser AMD, who were more then happy to show off their new cards, previously talked about here. They spoke mostly about how powerful their new cards, using DOOM as a direct comparison to Nvidia’s previous footage on the shooter. Also shown was their experimental, and frankly goofy looking, VR Backpack PC, to remove the need for wires from a VR setup. The idea is still in alpha, so here’s hoping it gets a bit better.

Speaking of VR, three games were announced for VR throughout the show. First was Serious Sam: The Legend, a remake of the venerable shooter in VR, now with dual-wielding. After that was Killing Floor: Incursion, a survival horror based on the Killing Floor ip. Finally, there was Superhot: VR, a remake of the action-shooter in VR, which makes nothing but sense considering the context of that game.

Speaking of Killing Floor, more content was announced and released for Killing Floor 2 with the new Sharpshooter pack, which adds in new sniper weapons to kill the Zeds. Also released was Zeds V Player mode, allowing PVP. Finally a release date of later this fall was slipped in, indicating the game is nearly finished.

We got to see a game called Vampyr by the guys that made Life is Strange. It didn’t look like Life is Strange, but it did involve killing vampires, or killing people as a vampire, not totally sure. Details were really slim, so here’s hoping more details come soon.

We also got a look at Observe, a first person horror game involving cyperpunks. And a quick look at Dropzone, an RTS-MOBA hybrid about fighting robots. Not a whole lot of info on either at this time.

What we did get some more info on was Arma 3: Apex, the upcoming expansion to the FPS military sim. Included was an extended look at the new landmass, as well as a quick glimpse at the new weapons and vehicles to be added. Also teased was early access to anyone that pre-orded the expansion, so if you were planning to do so, now is the time. Next in the seemingly endless parade of games was The Turing Test, a new first person puzzle game reminiscent of Portal. Given the name there’s likely to be plenty of questions about robots and the meaning of humanity, as well as puzzles involving the weird looking electro gun shown in the demo.

Speaking of questioning humanity, we got a look at Overland, an isometric survival game that tasks the player with making a roadtrip across the post-apocalyptic USA. The idea is certainly neat, and it lends itself well to the rogue-like gameplay Overland promised.

And on the note of survival in an alien environment, we got a look at Dual Universe, which bore a striking similarity to Space Engineers. However, there seemed to be an overwhelming simplicity to the game, and a lack of annoying realism, as well as the promise of seamless space and planet gameplay, as well as one persistent world for all players. Whatever it is, the idea of space sims making a comeback makes a lot of people pretty happy, this writer included.

In the same vein of Dual Universe was an extended look at Halo Wars 2, this time hitting PC as well as X1. The Halo series lends itself well to the RTS genre, and with Creative Assembly behind the wheel this game promises massive battles with a quick, console based focus on speed of deployment for maximum fun.

Finally, or at least here’s hoping because at this point the Ubisoft show has started, was a new announcement from the team behind Insurgency: Day of Infamy, a standalone version of the popular Insurgency mod. It’s World War 2 on a massive scale, the sort we’ve seen from the mod with more maps, more weapons, and more ways to play.

That was the PC gaming show for 2016. Not as long as last year’s legendary 3 hour show, but it did feel a bit slow. Still, AMD and host Sean “Day9” Plott did a great job of once again keeping it PC centric at all times.