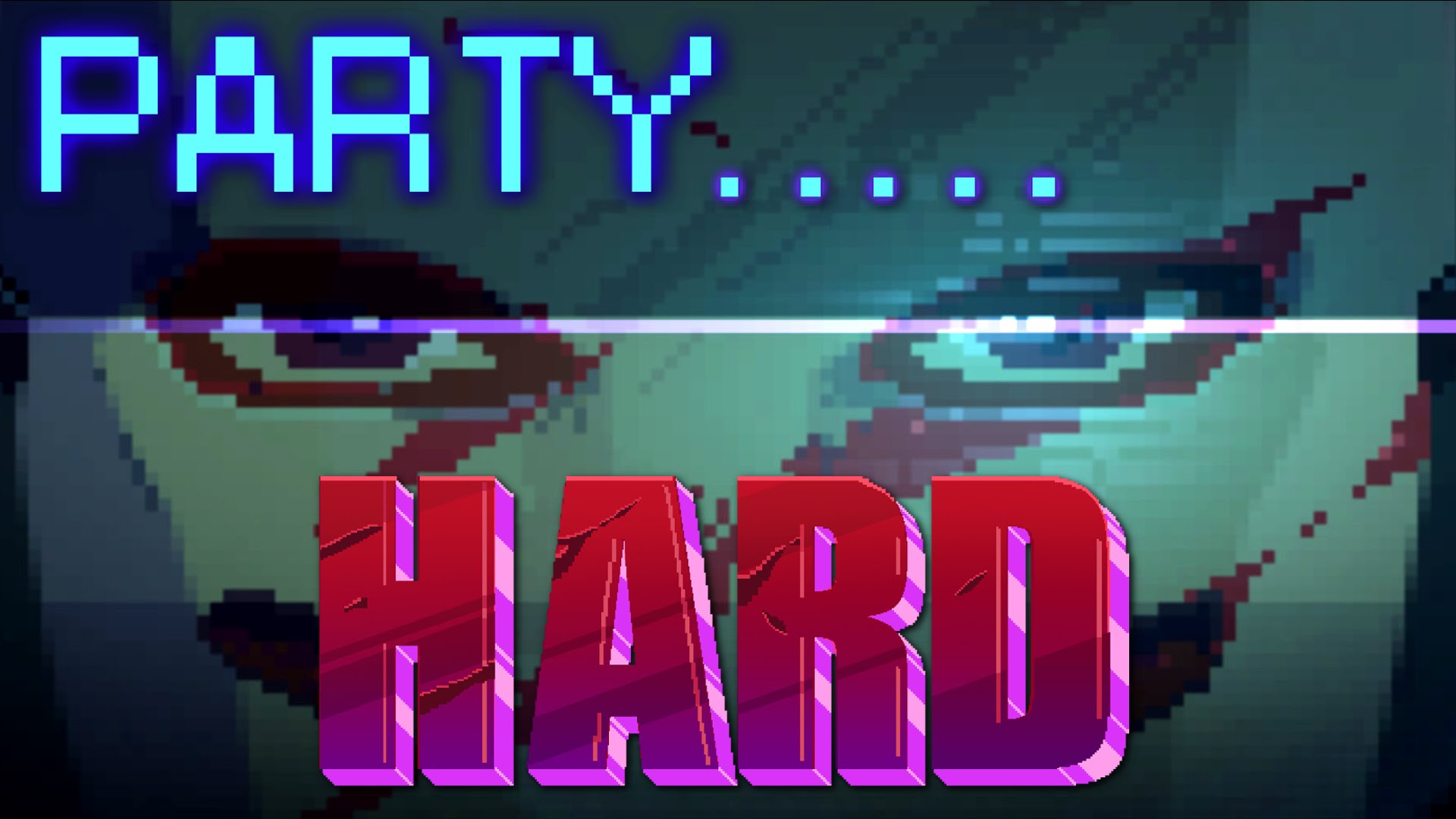 Originally released on the PC in August of 2015, Party Hard is now available on both the Xbox One and PS4. With a top-down perspective and gameplay that feels like a mash-up between Hotline Miami and the Hitman series, has Pinokl Games created a must have for stealth junkies?

The plot is rather simple: you play as a character who can’t sleep due to incessant noise coming from a nearby house party, and once the clock strikes 3 AM, our “protagonist” decides that the only resolution to his problem is going on a murderous rampage. After quelling the initial party scene, we take a tour around the United States, visiting various other parties, and senselessly murdering all attendees. Between missions, the player is treated to short cutscenes in which we see a back and forth discussion between police officer John West and an interrogator, as they discuss West’s investigation of the so called “Party Hard Killings”. Both the script and voice acting during the cutscenes are incredibly weak; the direction and outcome of the narrative are so easily discernible after the first cutscene that there’s virtually no suspense, intrigue, or payoff, leaving me to wonder why the developer even bothered including the story elements at all. 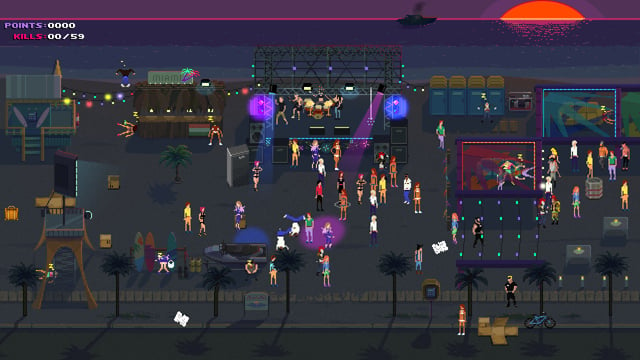 Like countless other indies, Party Hard uses a pixelated art style, and while many would argue that said style is timeless, with so many other developers opting to adopt a similar aesthetic, any game going the pixel-route needs to have its own unique flare if it’s going to stick out, and Party Hard just doesn’t have memorable imagery. While games like Hyper Light Drifter and the aforementioned Hotline Miami make pixels look “next gen”, looking at Party Hard only gives off the impression that its just another pixelated game. With that said, for fans who enjoy the art style, while definitely unimaginative, the game still looks good for what it is.

There’s minimal variance in the level design throughout the campaign, and considering the main questline only consists of 11 missions, it’s disappointing that 2 levels share virtually the exact same rooftop location and layout. Perhaps the coolest part of the game is how each time you re-load a level, the general layout of the party-goers and the type and location of traps may change. For example, when doing the night club level, sometimes there’ll be a huge line up at the door, and other times there’ll be a huge crowd in the indoor pool. This element of randomness certainly adds a layer of replayability and unpredictability to the game. There are also completely random events that occur, like a UFO appearing and dropping some aliens into the party zone. These events don’t add all the much to the experience, but they give the game some charm, and they’ll make you laugh from time to time.

All of the levels are packed with people to murder, with most maps having well over 40 party-goers roaming around. Unfortunately, the game’s frame rate can’t keep up with all the action happening on screen, as frame rate drops are common, sometimes plummeting all the way to zero and freezing for a few seconds when you set off an area-of-effect trap that hits multiple people. I also experienced various glitches ranging from minor to exceptionally frustrating, such as comical instances of dead bodies getting up and dancing, and an extremely annoying occurrence on one level where the final person I needed to kill was invisible, forcing me to roam around blindly stabbing the air until I found them. I cannot attest to whether or not the PC version of the game has these issues, but the console version is certainly riddled with bugs. 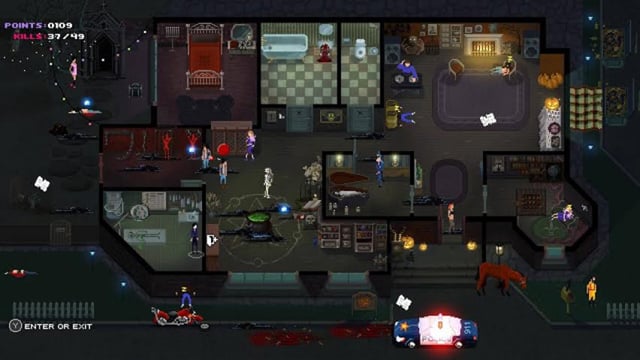 Contextually the game is just a mess. Described as a stealth-action game, the player must navigate around each level, eliminating party-goers sneakily, while not getting caught. The player is equipped with a knife which can instantly kill victims, and each level has several traps lying around, ranging from torture devices to firepits. If you’re seen stabbing someone, the witness will rush to a telephone to notify the authorities, but if you walk into a group of people and push someone into a camp fire, for some illogical reason, no one will identify you as the perpetrator. One level  has an illuminated dance floor which can be rigged to explode, killing anyone on it. While it makes some sense that no one saw me fiddling with the floor’s electrical box, why is it that none of the surviving party goers go on alert, even for a short while, after 20+ people just died in the middle of the party? Instead, everyone just keeps dancing, as if nothing happened. You can set up a bomb right out in the open and no one will bat an eyelash, but the cops will arrest you if you pick up a sleeping person and gently put them down on the other side of the room. It’s pretty obvious from the get-go that Party Hard isn’t a game that takes itself seriously, but even so, the way the AI reacts to you and your actions is just so illogical and inconsistent that I found myself never being even slightly immersed or invested in the scenarios the game tried to sell me.

When you get caught committing murder, a single police officer will attempt a one-man raid, but all the player needs to do is jump through a window (or one of the other shortcuts that the police can’t use for whatever inexplicable reason) and the officer will simply give up and go home. Using a shortcut to dodge the fuzz will cause an unkillable NPC dressed like Nintendo’s Mario to appear and block the shortcut, but luckily the police can be easily avoided by simply walking away from them for long enough. In most stealth games the player is penalized for leaving a trace, but here the player can kill people and freely leave bodies out in the open as there’s next to no punishment for doing so. There’s no sense of escalation either; no matter how many times the police are called, only one officer at a time is sent to the scene of the crime. Apparently if you kill enough officers eventually the FBI will send agents after you, but I never felt the need to kill the cops, since they’re too lazy to even chase me across the screen. 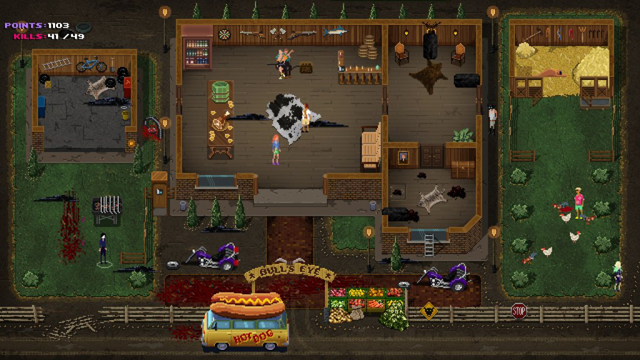 The game’s core mechanics range from poor to incomprehensible. Even after my 6~ hour play through, I still don’t understand how some things work, simply because they seem completely random and irrational. Countless times I’d kill an isolated individual, completely out of sight of anyone, and then rush off into a crowd to mingle inconspicuously, only to have a cop single me out as the killer for absolutely no reason. Sometimes bouncers will attack you on sight, and other times they’ll completely ignore you. There’s simply no way to know how they’ll react, leading to extremely frustrating encounters. Perhaps these issues would be excusable if the gameplay was fun enough to cover up all the flaws, but unfortunately that’s not the case. Party Hard is excruciatingly repetitive,  and it’s not helped by the fact that nothing you do in the game is actually fun. Most of the time you’re just waiting for targets to isolate themselves, or setting off traps, which may sound exhilarating, but it’s really not. All the animations in the game are incredibly dull, giving the player no satisfaction through execution.  To top it all off, the game’s musical soundtrack is decent, but the ambient noise and the ear piercing non-stop screeching that occurs when people get frightened led me to have my TV on mute more often than not when playing.

Upon completion of a level, you’re given a numbered score, but seeing as the game doesn’t have online leaderboards, how are we supposed to know if our score is even respectable? The least they could have done is implemented a letter grade, because getting a B+ on a mission actually has meaning, unlike a random number like 5659. Overall, the game feels much like its own scoring system: hollow, confusing, and a waste of time.