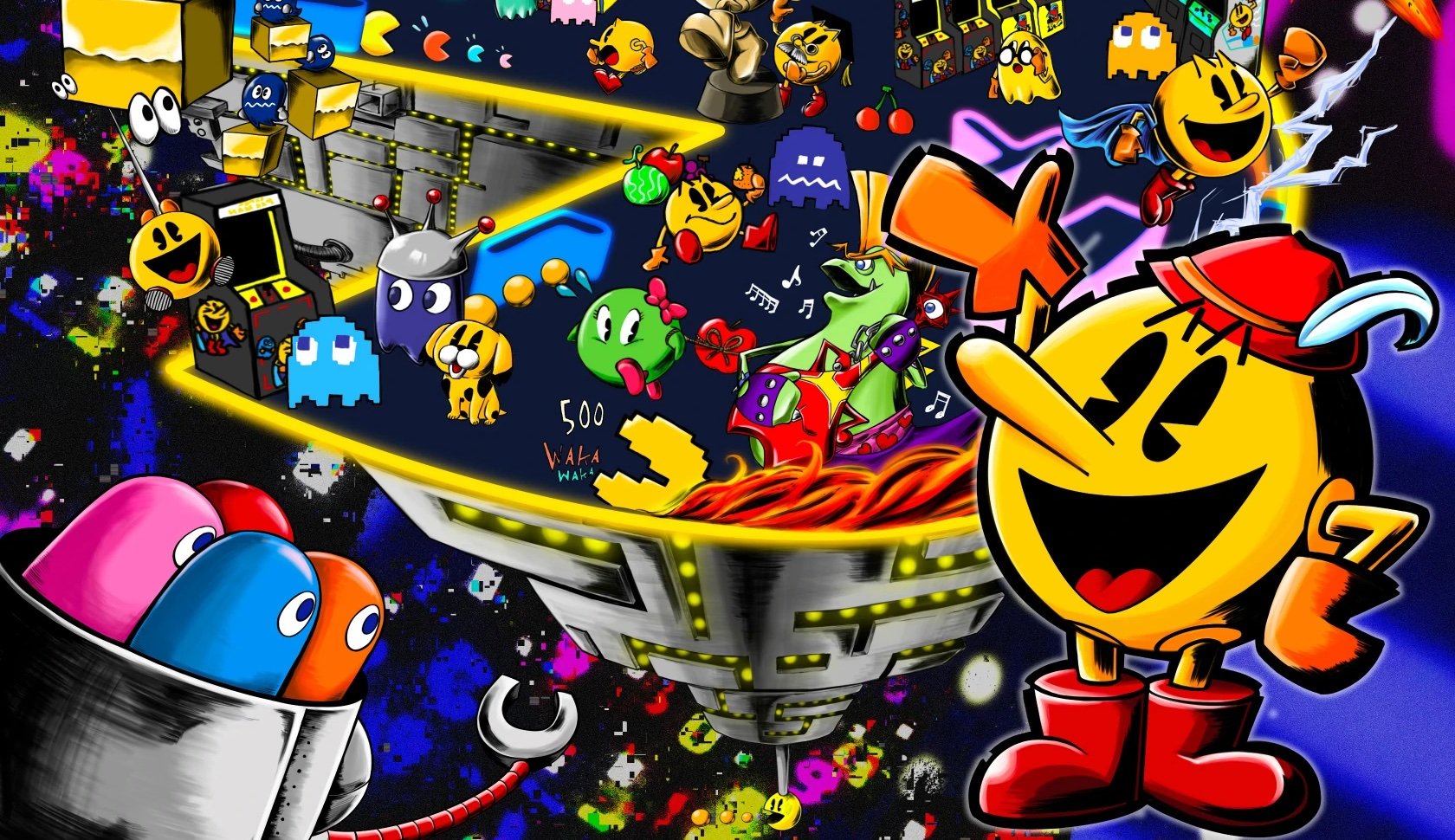 For over five years, Bandai Namco has become consistent in rereleasing their retro catalog. It may be hard to believe, but there has been a Bandai Namco compilation released every year since 2016. While each compilation has stuck to representing the retro Namco brand as a whole, Pac-Man Museum+ is here and ready to diverge from the company’s usual practices amidst an earned celebration for the fan-favorite arcade icon. It may not be the most refined Namco compilation title there is, but Pac-Man Museum+ is a worthwhile palooza featuring some of the character’s greatest outings. It’s a messy yet enjoyable party hindered by limitations and technical issues.

Pac-Man Museum+ is essentially another iteration of 2014’s Pac-Man Museum; the game is a reimagined collection of 14 classic titles that came from both arcade cabinets and home consoles. Pac-Man, Super Pac-Man, Pac & Pal, Pac-Land, Pac-Mania, Pac-Attack, Pac-In-Time, Arrangement, Championship Edition, Pac-Motos, Pac ‘n Roll Remix, 256, and Battle Royale are all included here with a handful of extras. In the same maze as the other previous Pac-Man compilation, the games Bandai Namco is providing in the new collection can range from fine to amazing as they dabble into Pac-Man’s vast history.

Without objectively diving into each game, what Pac-Man fans will care about most before picking up this collection is how the compilation holds up by itself. In terms of game variety, Museum+ is a surefire hit for its price. Players are getting more than enough game variety here even if some of the ghost muncher’s most beloved and desired titles like Pac-Man World are not included. The obvious standouts like Pac-Man Championship Edition and Pac-Man Battle Royale practically justify a purchase by themselves, and titles like Pac ‘n Roll Remix and Pac-Motos are welcoming gems of the franchise.

If you are looking for a bang-for-your-buck Pac-Man package, the compilation does not disappoint with its offerings. Each title in Museum+ has in-depth online leaderboards, challenging missions, and plenty of competitive aspects that will leave completionists satisfied. The only shame to having all these games stuffed in one place is the emulation technicalities and collection structure. Pac-Man Museum+ can slip when attempting to be the definitive Pac-Man experience for a multitude of rather silly reasons. Museum+ is far from being the best compilation title Bandai Namco has published in the last few years due to how its games can sometimes run and are overall presented.

While the flaws are not big enough to derail the entire experience, they are quite noticeable and, on select, occasions even questionable.

This Maze Has Problems Beyond the Ghosts

There are quite a few weird emulation quirks that can be seen throughout the compilation. From controls to picture quality, a handful of the games have their own bearable and bothersome issues. During my time playing the game, I noticed these issues: Pac-Land noticeably has some V-sync problems, Super Pac-Man’s controls can be imprecise, Pac-Man Championship Edition is not running in a perfect HD resolution, Pac-Man Battle Royale’s gameplay elements do not look completely clean, and Pac-In-Time can occasionally not save the player’s progress. Aside from Super Pac-Man, every game’s problems never affect the overall enjoyment to be had.

Additionally, it should be mentioned that Pac-Man Museum+ completely lacks button configuration and the ability to change the bezel on each game–the majority of the bezels do have fantastic art, though! Many of these games are as simple as an arcade game can get, but a handful of options to make the experience more accessible and visually pleasing would be appreciated. At the end of the day though, customers are getting what is arguably one of the most effective ways to play through a good portion of Pac-Man’s catalog–the keyword being “effective.” Pac-Man Museum+ strays a fine line between content and convenience. The package is trying to be more than what it can handle.

The best aspect of any gaming compilation is convenience, yet Pac-Man Museum+ can often muddle the player’s experience by getting too complicated. Museum+ was not designed to be so much a pick-and-choose compilation; the game forces players into experiencing each game multiple times. Players do not begin Museum+ with every title available to them. The game has its own progression system.

To unlock every game in the compilation, players have to see a game over screen in almost every title about two times. If you are not a fan of the Pac-Man platformers and experimental arcade titles part of this collection but are interested in seeing everything the package has to offer, this can be rather frustrating. Players should prepare themselves to waste quite some time loading into a level and immediately attempting to lose if they wish to get to some of the game’s best titles.

Getting into each game can be quite a hassle from the customizable hub, as not every title has its own arcade cabinet. Pac-Man Museum+ already has a clunky user interface to work with. Not being able to conveniently find all fourteen games while running around as Pac-Man can be frustrating. Clicking the start button to scroll through the full list of games is a far more effective option than running around to different machines attempting to find the game you want to play. The hub world itself is quirky and cute but provides nothing special in terms of experience.

The only actions players can partake in when walking around their customized arcade are simply looking around and strolling up to the different cabinets. There are no interactive aspects in this virtual arcade. It is hard not to wish there was more to the hub world, but considering Pac-Man Museum+ is focused on games and challenges, and the title is priced at less than half the average triple-A game, there is quite a bit of room for forgiveness. Nonetheless, the whole arcade is an unnecessary addition that feels tacted-on, rather than a true celebration of Pac-Man’s history. It’s a feature that players will not shun, but something they also won’t spend too much time in.

Still, Get Your Tokens Ready

Amongst all of its problems, Pac-Man Museum+ is still packed with some of Bandai Namco’s best Pac-Man titles. It may contain some of the franchise’s lesser received games, but the 14 being offered here still provide plenty enough to satisfy. For longtime Pac-Man fans and casual players wanting more from the yellow puck, there is a lot of great content to chew on with Museum+. It may not be even one of the most well-structured or articulated Bandai Namco compilations players can experience, but Museum+ does everybody’s favorite arcade mascot a modern service.