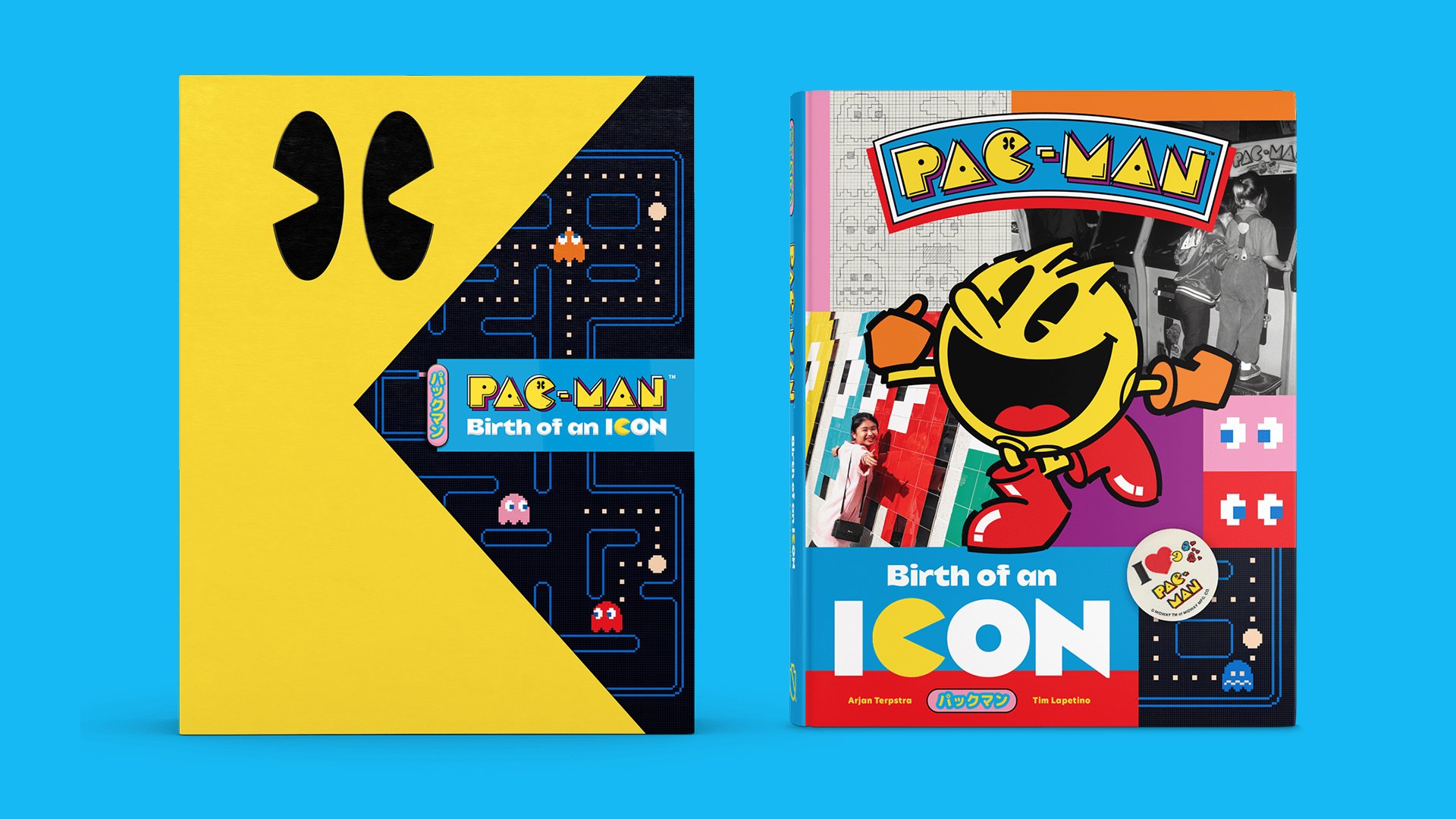 Pac-Man: Birth of an Icon Review

For those unaware, Pac-Man has been having a wonderful yet underrated year that has just kept on giving. As Toru Iwatani’s creation celebrates his 40th birthday around the globe and far outside the arcades where he first began, it almost seems like Bandai Namco is undermining some of the fantastic Pac-Man content fans have been getting recently. Publisher Cook & Becker’s Pac-Man: Birth of an Icon, by co-authors Arjan Terpstra and Tim Lapetino, is yet another addition to the cream of the crop of Pac-Man products fans can pick up this year. The beautiful new extra-large coffee-table-sized compendium is by far one of the best Pac-Man and video game archival features ever to be officially released.

Pac-Man: Birth of an Icon is a celebratory work of the unstoppable yellow puck’s origins to worldwide fame. With well over 300 pages of history and plenty of extra features to spotlight, Terpstra and Lapetino’s latest piece contains an entire board of nostalgic and newsworthy power pellets worth eating up. It elegantly tells the tale of how the Japanese coin-op industry took off overseas thanks to Toru Iwatani’s loveable pizza with a missing slice and a couple of large quarter-swallowing cabinets. The book is focused not only on the evolution of the games industry and arcade business, but it also brilliantly shows how Pac-Man changed contemporary culture as a whole.

Cook & Becker left no stone unturned with Birth of an Icon as they went out of their way to ensure that their book was the ultimate Pac-Man feature for his big year. Birth of an Icon is littered with known Pac-Man facts and untold stories from across the world mostly in regards to the debut arcade game. It flaunts its knowledge exceptionally through a careful stream of text and images. From higher-ups at Midway and reporters digging into the fever to Bandai Namco’s own team of game designers and tournament winners from across the globe, the pool of interviewees, facts, and photos throughout the book is strikingly thoughtful. Not a single page is wasted from both a textual and visual perspective.

Interviews from games industry veterans, the media, and notable public figures are included in almost all of the book’s nine chapters as Terpstra and Lapetino take readers on a surprising journey through Pac-Man’s power slide to popularity. Every interview further enhances the reader’s understanding of Pac-Man’s legacy and provides insightful information as to how exactly the original arcade game drastically changed the world over time. It never misses a beat on its journey to submerge readers in the past as it intricately tackles the subject from all sorts of angles such as designing, marketing, commercializing, and just being an ordinary Pac-Man fan.

While Birth of an Icon does a wonderful job exploring Pac-Man’s earliest days on the market, it is a shame that it never takes the opportunity to fully visit the character’s years well beyond the arcade boom. The book’s title is quite literal; many of the character’s later appearances including the Pac-Man World trilogy and even Toru Iwatani’s final effort part of the franchise, Pac-Man World Championship, are never touched upon outside of the “Pac-Man Gameology” section. Perhaps the focus on the 80s is justified and well-placed, but ignoring the character’s later years during the closing chapters when he was exploring new markets and physical ventures does make the book feel as if it is leaving behind an important part of Pac-Man’s legacy.

However, the excellent archival content being presented here just makes the complaints against the available timeline irrelevant. The focus on the first arcade game never hinders the title’s total content. It is hard not to be impressed by everything Pac-Man: Birth of an Icon hands over to readers.

If there is one key aspect of Pac-Man: Birth of an Icon that fans will absolutely relish, it is the high-definition scans and imagery. As if the book’s high-quality pages were not already exceptional enough, the premium documentation done here is astounding. Readers who are into the preservation of video game history will have so much to dig into with Birth of an Icon. From the various versions of the original Pac-Man arcade cabinet and Iwatani’s game design documents to store advertisements and nuggets of product placement, there is such an overwhelming amount of retro content to explore. It is hard not to look at Pac-Man soup cans or Halloween costumes from the early 1980s without smiling.

As if there was not enough to highlight, the book also comes included with the first-ever English translation of Toru Iwatani’s original 2005 “Pac-Man’s game study manual” (subtitled as the “Pac-Man Method”). If you ever have had the slightest curiosity as to how the creator came up with the arcade game or his philosophy behind playing it, the two-chapter manual that only spans 20 pages is well worth reading. It would be an understatement to say how incredible of a bonus this short-ending section of Birth of an Icon is as it gives fans a faithful deep dive into Iwatani’s thoughts. The fact that Pac-Man’s creator gets the spotlight for the closing pages of the book feels appropriate — and once again, celebratory.

Cook & Becker has shown the absolute utmost care for Pac-Man. Just one skim through their latest book will speak for itself. Out of all the physical goodies the arcade giant’s 40th anniversary has had to offer, Pac-Man: Birth of an Icon might be not only one of Bandai Namco’s best items to highlight this year but their most important. The entire production of the book is clearly out to honor Pac-Man’s history, and it does so successfully as it creates an educational and engaging documentary of the character’s early years. Co-authors Arjan Terpstra and Tim Lapetino have helmed a must-have work. Whether you are purchasing a standard copy or doubling down for that limited edition and its extras, Pac-Man: Birth of an Icon is something all Pac-Man fans should have on their shelf or table.

Editor’s Note: A review copy of Pac-Man: Birth of an Icon was provided to us by Cook & Becker. For those interested in purchasing a copy of the book, you can visit the publisher’s website.