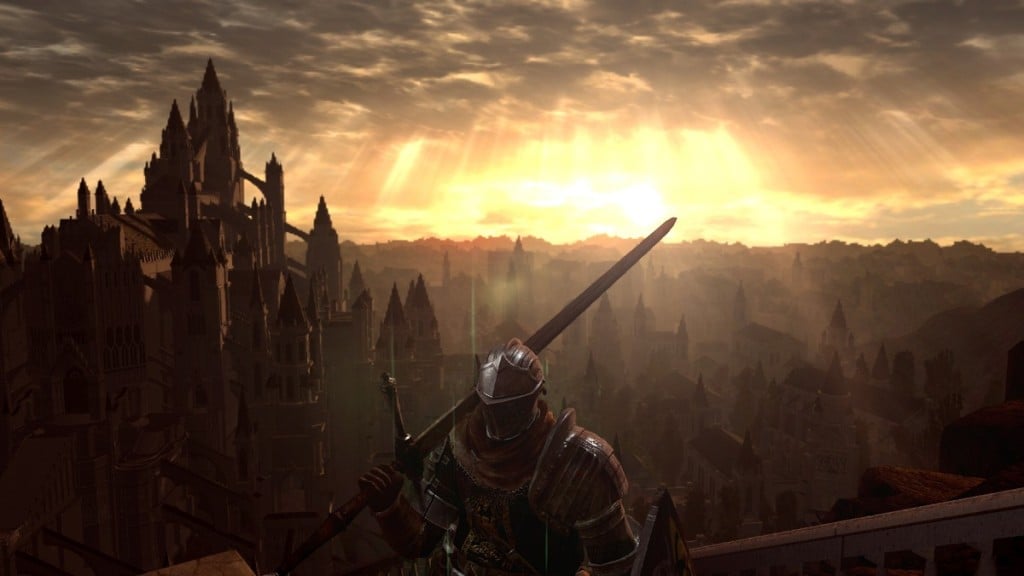 In the brutal gauntlet of Dark Souls boss encounters, there are a daunting amount of epic and memorable battles to consider. From the soul-crushing difficulty of battling four undead kings in the darkness of the void to the haunting duel with a fallen hero in a blasted coliseum to the tragic encounter with a giant wolf who is simply guarding his master’s grave, this is a game rife with intense boss moments, but none carry more nerve-racking danger than the encounter with the former heroes of the kingdom, Ornstein, and Smough.

From the moment you reach the area of Anor Londo, it’s clear that something major has changed narratively in Dark Souls. The notoriously oppressive and dark atmosphere of the game shifts to a world which is bright with sunlight, and rich with gorgeous ivory architecture and the mythic towers of legend. However, much like the rest of the game, there’s not much for company in the area…well, friendly company, that is.

Anor Londo is filled with things that want to kill you, and badly. Lightning wielding gargoyles, living statues, and a legion of well-trained knights are all vying for your head in an attempt to keep you from reaching the center of this city, which, of course, only makes you want to get there even more than you already did.

Your final obstacle before you reach the throne room, though, is easily the most daunting and formidable of all. When you enter the vast hall of Anor Londo’s palace, you are greeted by the perfect storm of destruction and decimation in the form of Ornstein and Smough. Ornstein is a spear-wielding, electrically-charged gladiator who moves as fast as the lighting he wields while Smough is a hulking, massive behemoth with a pillar-smashing sledgehammer that’s larger than your entire body. Together they make for the most dangerous and devious battle of your life.

When you’re not dodging Ornstein’s deadly serpent-like spear strikes and electrical attacks, you’ll be barely evading Smough’s weighty girth and deadly hammer blows. The smallest mistake or miscalculation can lead to instant death, and the escalating length of the battle only further solidifies the intensity and fatigue of this brutal showdown.

Now, video game logic might have you assert that the battle will get easier when you eliminate one of these terrible foes and are left to focus solely on your remaining adversary. Yeah, From Software thought of that. Far from becoming easier after you take down one member of this gruesome two-some, the battle actually gets monumentally harder, as the surviving warrior will absorb the powers of his fallen comrade to become even more terrifying. Kill Ornstein first and you will be left with a lightning-charged giant in Smough. Conversely, if you make the regretful mistake of taking down Smough first, you will have to deal with an over-sized Ornstein, with his initial speed still firmly intact.

It’s the ultimate lose-lose situation, and it forces players to adapt very quickly depending on how they play the game. There is one through-line for everyone, however. Regardless of whether you’re a speed player or a magic user, whether you’re strength-based or stamina-focused, Ornstein and Smough will take everything you’ve got to put them down for good.

Even if it’s not the final battle in Dark Souls, or even the most meaningful one from a narrative perspective, the sheer power, and fierceness of this fight is unmatched by any other in the game, and really, very few from gaming in general. The closest approximation we could conjure would be in the form of a Game of Thrones reference: imagine, for a moment, that instead of fighting each other, the Red Viper and the Mountain were both focused on you. That’s essentially what you’re up against here.

With soaring stakes, thrilling music, and dozens of close calls, Dark Souls‘ Ornstein and Smough will keep you on your toes from the moment you meet them, to the endlessly satisfying second that you finally achieve victory.