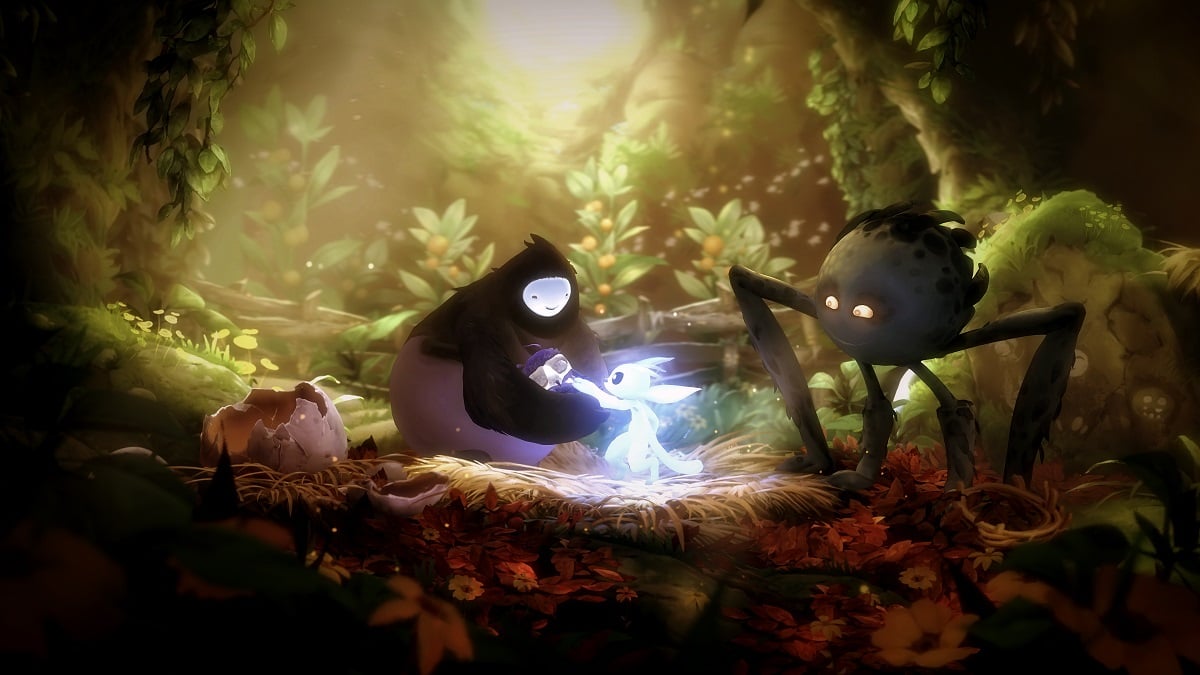 In an era where big-budget puzzle-platformers are few and far between, the Ori franchise stands as an anomaly. Not only did the first game debut on a console with an unproven audience for that type of game platformers, but it managed to thrive there and subsequently receive some of the highest accolades of any title this generation. Moon Studios’ follow-up, Ori and the Will of the Wisps, is both a love letter to fans and the genre itself.

Ori’s new adventure begins shortly after the birth of a new family member: an adorable little owlet named Ku. The ragtag bunch each play their part in raising her, and when she eventually yearns to fly and see the world, Ori accompanies her on a quick trip through the skies. However, it’s not long before a violent thunderstorm appears and sends the pair flying in different directions. Thus begins the journey to find Ku and bring her home safe and sound.

These opening cutscenes set the stage for what can only be described as a next-gen visual experience. Every environment is painted with such painstaking detail that it’s frankly overwhelming at first–and that’s on a 1080p display. What’s more impressive is that every bit of these backdrops (save for a few cavernous sections) are constantly in motion and feeding into the action in the foreground. Be it a massive waterfall, the vile bubbling of a murky swamp, or the gentle sway of decaying trees in the distance, there’s never a part of Ori that doesn’t feel lived in.

This is to say nothing of Ori himself, whose nimble acrobatics and buttery-smooth attack animations are in a league of their own. Controlling him feels second-nature, but the fluidity with which he transitions and maneuvers around the screen is unlike anything I’ve ever seen. This goes for several of the enemies as well; some stand proudly and prance about before slamming into the ground with so much force that it buckles their knees, while others are hulking humanoid beasts who stalk their territory with a bloodthirsty gait full of menace. Jaw-droppingly gorgeous cutscenes aside, it’s these fully-realized character designs that truly breathe life into Ori.

With how good it looks, it’s easy to assume that the Ori franchise is all flash and no substance; thankfully, that couldn’t be further from the truth. In fact, it’s rather methodological in its metroidvania approach: players start out with little-to-no abilities, come across seemingly insurmountable obstacles, gain new powers, and forge both ahead and backwards to discover every secret the world has to offer.

This classic formula is anchored by rock-solid platforming mechanics. Over the course of his adventure, Ori will learn to double-jump, stick to walls, air dash, glide, and more, and every level is meticulously crafted to take full advantage of his abilities. Much like the best parts of Shantae and the Pirate’s Curse, these mechanics are gradually pushed to their absolute limits in a way that empowers players to navigate complex death traps with the utmost grace. Wall jumps, disappearing platforms, mid-air maneuvers, projectile manipulation; it’s all here, and it’s all incredibly satisfying to master.

This mechanical depth feeds directly into the exploratory focus of Ori and the Will of the Wisps. Though the world is clearly divided into themed nodes–a sand-filled desert area, a murky underground area, and so on–visiting each of these ignites feelings of pure wonder and curiosity. Simply put, the level design is phenomenal from both a structural and artistic standpoint. There’s rarely a set piece that seems unnecessary or a platforming challenge that feels haphazardly thrown together. Though the levels demand ingenuity and skill in equal measure, they never felt unfair, and it only takes cracking one particularly difficult puzzle for it to become clear just how out of the box Ori expects its players to think.

That said, make no mistake: Ori and the Will of the Wisps can get brutal, even on the recommended Normal difficulty (Easy and Hard options are available as well, but they can’t be toggled after starting a file). This is a platforming enthusiast’s platformer; it’s constantly experimenting with new concepts and requires players to adapt on the fly. Thankfully, the ramp-up is gradual enough to just skirt the line between immense satisfaction at overcoming obstacles and frustration at barely missing the mark.

Ori starts out as one might expect: powerless, weak, and without much in the way of a moveset. His core method of attack is a spirit sword that can be swiftly brought down upon enemies in a brilliant shower of sparks and light. Felled foes drop gold, which can, in turn, be used to buy a range of weapons from a traveling blacksmith. These run the gamut from a massive hammer to a bow, and each comes with its uses in and out of combat. Furthermore, certain augmentations can be bought elsewhere that grant buffs like giving the bow a higher firing rate or making Ori 15% more powerful in exchange for taking 15% more damage.

While it might be a bit disappointing to have to save up money and find the blacksmith to unlock or upgrade equipment, the wait is well worth it. Each weapon compliments the other perfectly and they’re all surprisingly tactile to use. The sword feels light as a feather while swings of the hammer are slow, lumbering, and devastating by comparison. The game can be finished by using the sword alone, but the addition of other options makes the moment-to-moment gameplay that much richer and the wide variety of enemies that much more fun to take down.

The bosses, on the other hand, are an entirely different matter altogether. These grand spectacles live up to their name in every sense, providing what are easily the most difficult (and sometimes flat out frustrating) sections of the game. Each towers above the comparatively tiny Ori and takes over the entire screen with their relentless attack patterns and massive health bars. The only solace disheartened players might find is that there’s an “Abandon Challenge” button that can be used to exit out of boss battles and respawn at the latest save point, freeing players up to travel elsewhere and return down the line.

A Symphony for the Ages

The connecting tissue that permeates everything I’ve mentioned thus far is the absolutely astounding score by returning composer Gareth Coker. From the rambunctious theme of Inkwater Marsh to the ominous violins of Kwolok’s Hollow, every piece of music fits its environment like a glove and does wonders in setting the mood for each area. Special mention goes to the blissful tunes of Luma Pools, the composition of which should single-handedly earn Ori and the Will of the Wisps a nod for best soundtrack of the year alone.

And it’s not just the tracks themselves; it’s the crackle of the light sword as it collides with an enemy, or the gravely creak of a rock as it’s pushed around to complete a puzzle. It’s how the soft pitter-patter of Ori’s feet on the grass turns into crisp footsteps on harder surfaces, and how everything suddenly becomes muffled and soft when underwater. It’s these satisfying little details that make everything every bit of the audio experience for Ori so special.

At times, playing Ori and the Will of the Wisps genuinely feels surreal. It’s a tight puzzle-platformer boasting some of the highest production values of any game in the medium. Every slice of a sword and swing of a hammer feels visceral in a way few action games have mastered, let alone metroidvanias, and the level design on display is some of the best in the industry as far as platformers are concerned. In short, this is an incredibly easy recommendation to any fan of the genre or anyone interested in trying out. This has cemented Moon Studios as one of Xbox’s premier first-party developers, and one can only wonder what great feats they’ll accomplish from here.