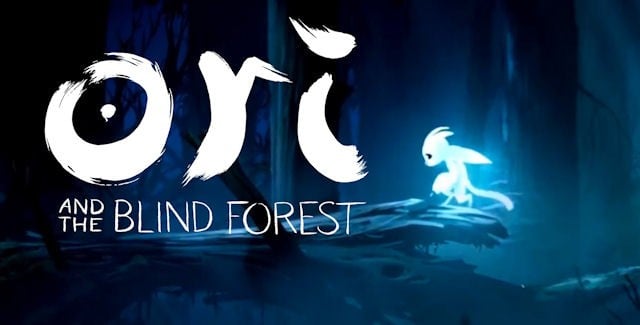 Recently there have been many notable platformers–in an industry with an immense history of them. So how does one go about making a platformer that feels unique, fresh, and original?  Look no further than Ori and the Blind Forest, the first collaboration of Moon Studios and Microsoft Studios.  By combining “Metroidvania” exploration, smooth controls, cinematic action sequences, genuine heartfelt moments, and a gorgeous score, Ori transcends the typical platformer and will likely be a fan favorite for years to come.

The opening chapters of the game depict a small creature, Ori, being separated from the tree on which it grew only to be found by a larger, black-furred creature, Naru, who lovingly raises Ori.  Immediately the game demonstrates its penchant for storytelling.  In a semi-playable montage of tender moments, we’re given a glimpse of the life Naru and Ori share together, one that’s mutually beneficial, plays out like a mother/son relationship, and is brimming with emotion.  When things go awry in the forest, however, Naru and Ori’s lives together come to a tragic close.  If the tender moments prior to the conflict don’t pull at your heartstrings, then the heart-rending moments of Ori remembering the best of her and Naru’s shared time will.  Ori, along with a little spirit named Sein, are left with the task to restore order to the forest by returning three elemental artifacts to their proper places and reviving the dying Spirit Tree, the source of Ori’s origin. At first, it might seem like you are playing through a touching storybook in game form, but that’s becauseOri is so artfully told.  At its core, it is an exploratory action-adventure.  The previously mentioned Sein, for example, operates as a guide through a series of gorgeous, well-designed environments while also operating as your first means to attack enemies.  Think Navi from The Legend of Zelda: Ocarina of Time, but with the ability to shoot fire.  The result is some unique gameplay that works well.  While this Spirit Fire might seem a little weak toward the end of the game, it is only one of a number of abilities you will acquire over time which simultaneously help you further explore the terrain and vanquish your foes.  An RPG-esque series of upgrade trees further enhance these abilities, making it easier to both fight and explore.

It is here that Ori truly shines.  Each ability helps not only reach previously inaccessible areas on the games large map, but also truly enhances the gameplay experience.  Whether referring to the ability to crawl up walls, ground stomp weak surfaces, or slingshot through enemy attacks and the enemies themselves, each ability has a distinct purpose while expanding the arsenal of the player. With one, large world map as opposed to separate worlds, these abilities make revisiting areas and traveling across the map, quick, easy, and even enjoyable, providing a great opportunity to reach previously out of range collectibles and practice the trickier power-ups.

This will largely help the player prepare for the game’s three dungeons, which contain some of Ori‘s most challenging portions.  Each dungeon implements fun new mechanics generally specific to that dungeon.  They also contain within their walls some of the most satisfactorily formidable puzzles, resulting in a fun, diverse break from the tasks and play outside of the dungeons.  Unfortunately, each dungeon concludes with an escape event, requiring the player to perform at their best with virtually no mistakes.  With no checkpoints, and the “Soul Link” ability disabled, which is how the players saves and often heal their character, these events, despite being short, often come off as over-demanding and present an almost cruel difficulty spike.  This is lamentable as these portions would be exciting and exhilaratingly cinematic otherwise.  With hardly any room for minor error, and some difficulty gauging how to proceed, these events hardly play like the enjoyable dungeon conclusion they were intended to and result in something often bordering on infuriating. At times it can also be challenging to discern what’s going on as Sein is vigorously shooting fire, glowing enemies are shooting their attacks, and health and experience are being absorbed by Ori, resulting in “wait, I died?” moments.  Perhaps a little too frequently making a slight mistake while attempting a platforming challenge results in an incredulously difficult recovery or the inability to right the situation at all.  Getting caught in a bramble of thorns isn’t the worst issue, as long as you saved your progress recently.  Perhaps a more critical mistake made by Moon and Microsoft was that certain areas are closed off to the player late in the games, meaning Ori can’t make his way back to collect some of those last Ability, Life, or Energy orbs.  Not to mention that if you complete the game, that file is no longer accessible, so if you intend to 100% Blind Forest, which should take no more than ten to twelve hours and is nicely assisted by some of Ori’s upgrades, make sure you do so before completing the final dungeon.

Combining smooth combat, exploration, heartfelt storytelling, beautiful visuals, and practical, enjoyable abilities that make the game more fun as it progresses, Ori and the Blind Forest is far more than the average platformer.  Veering away from cartoonish narratives frequently used in platformers, Ori weaves a tale as beautiful as its visuals, and, accented by its brilliant score, often feels like playing a storybook or an animated film.  Don’t turn a blind eye to Ori and the Blind Forest, it’s guaranteed to be one of the better-remembered platformers of the decade.