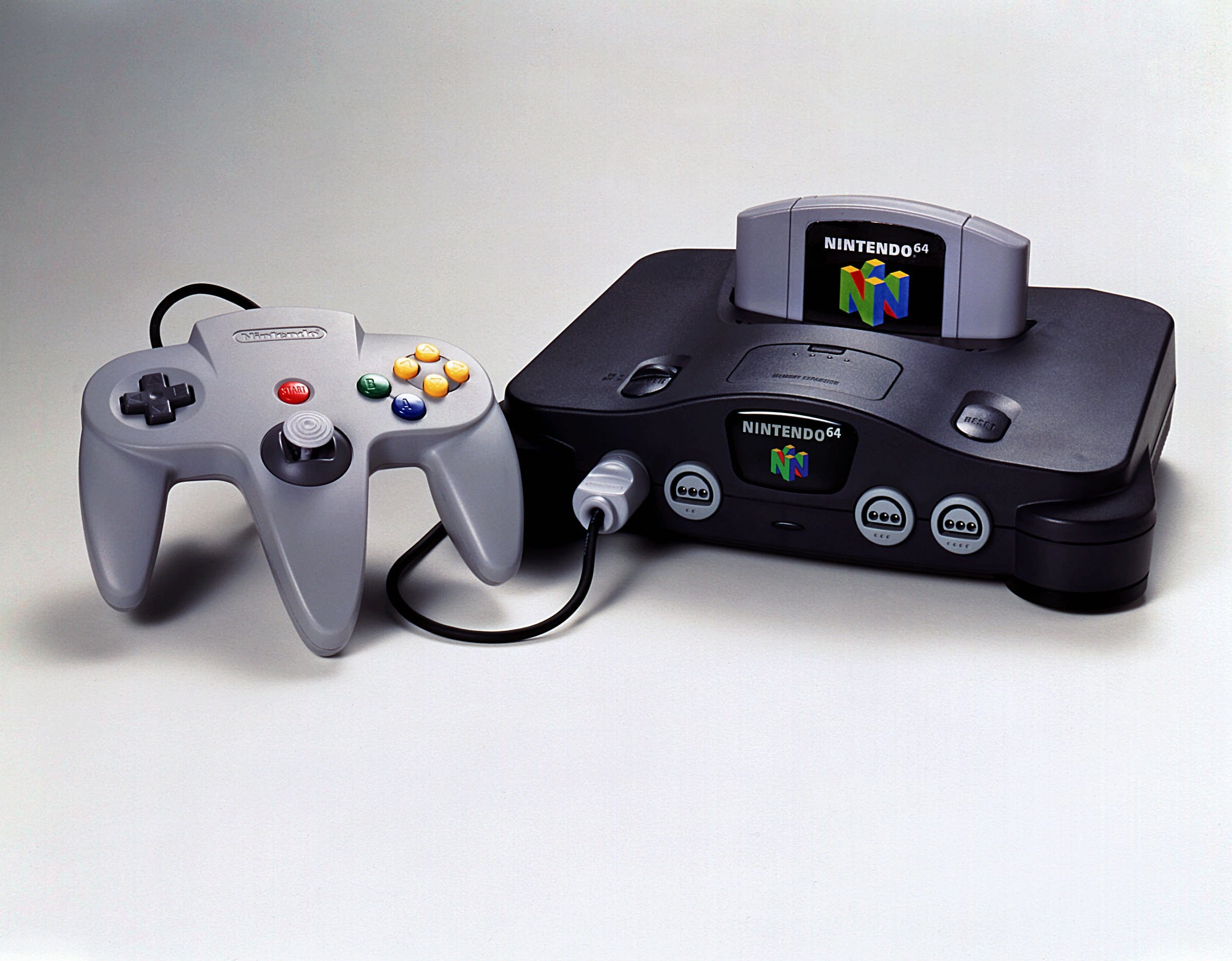 It was on June 23, 1996, that the Nintendo 64 made its hotly-anticipated debut in Japan. Before that, it was known as Project Reality or the Ultra 64 (if you read Nintendo Power) and it was shrouded in mystery. It didn’t make its way stateside for another three months, and when it finally did arrive, Nintendo’s final cartridge-based home console was something of a disappointment. The Big N had ambitious plans for the system including revolutionary control mechanisms, cutting-edge graphical processing power, and exclusive contracts with third-party studios like Rare, but the Nintendo 64 failed to match the sales of its predecessors, the Super Nintendo, and Nintendo Entertainment System and was utterly clobbered by Sony’s debut console, the PlayStation.

Nintendo 64 was projected to be the favorite in the console war, with the catchphrase “The 64 will change gaming,” but due to constant delays, it was released nearly two years after its main competitors, the PlayStation, and the Sega Saturn. At the time, the PlayStation was already dominating the Japanese market and by the end of the original PlayStation’s run, it had sold over 100-million units compared to the N64’s 33 million. Sony didn’t just win the console war, they wiped the floor with Nintendo. To be fair, a host of consoles crashed and burned in the 90s, such as the Atari Jaguar, Panasonic 3DO and Amiga CD32, which all became flops; meanwhile, Sega was desperately trying to catch up, but not even Nintendo could catch up to Sony. Superior third-party support and CD technology gave Sony the edge, not to mention PS1 titles were priced in the $40 range while N64 cartridges would sell for two to three times the price due to the high production costs. Yet, despite all of this, decades later the N64 seems like the most beloved console of the fifth generation of gaming.

The Nintendo 64 was launched with three games: Super Mario 64 and Pilotwings 64 (both released worldwide) and Saiky? Habu Sh?gi (released only in Japan). The 64’s suggested retail price at launch was US$199.99 and marketed with the clever slogan “Get N, or Get Out!”. It came with a unique controller that introduced an analog stick to Nintendo gamers, and while the Big N may not have been the first company to launch a peripheral with an analog stick, the N64 pad popularized the concept, paving the way for a host of similar hardware, including those made by its competitors. Built around three grips, the N64 gamepad resembled a lowercase letter m, and was designed alongside Super Mario 64, reinforcing Nintendo’s philosophy that software and hardware should be created in tandem.

Unfortunately, few games took full advantage of the controller. Those that did, though, were all among the very best of the generation. The N64 pad was also the first home console controller to feature force feedback capabilities, via the Rumble Pack that plugged into a slot on the peripheral, and it allowed up to four controllers to be plugged in at the same time. Nintendo even released a range of different colors and designs, and an assortment of limited-edition controllers was sold or used as contest prizes during the system’s lifespan.

IGN named it the 9th greatest video game console of all time; and in 1996, Time Magazine named it Machine of the Year. Yes, Sony may have stolen the crown from Nintendo but 33 million units sold is not a failure by any stretch of the imagination. In fact, the Nintendo 64 was mind-blowing and revolutionary at the time. It showcased 3D graphics and more importantly demonstrated how 3D worlds could deliver incredible gameplay. It changed the entire industry moving forward. 3D was the new way to go, and the Nintendo 64 made that possible, with a technological leap that was – back in 1996 – remarkable. When Super Mario 64 launched, it changed the face of gaming. And this is no exaggeration. There’s a reason why the genre-shaping platformer is considered to this day to be one of the greatest and most important video games ever made. The N64 boasted a 93.7 Mhz 64-bit CPU chip with a 62.5 Mhz RCP and 4MB of RDRAM on board at launch, making it the most powerful console of its generation, and while N64 titles still appear as blocky as any other 3D game of the time, PS1 and Saturn releases were noticeably more pixelated in comparison. More importantly, Nintendo’s classics have stood the test of time.

The biggest reason why the N64 is perhaps so fondly remembered is because of the library of games. It was simply a case of quality over quantity. Nintendo and second-party devs like Rare strengthened the N64’s library with hit after hit, many of which pushed 3D game development. Nintendo didn’t have the likes of Tomb Raider, Metal Gear Solid and Tekken 3 – titles that helped the Playstation find an audience with a more “mature” crowd than its Nintendo counterpart, but when the N64 was at its best, it exceeded its rival. There aren’t too many releases on the Sony platform that I would put in the same league as Rare’s Conker’s Bad Fur Day, Banjo Kazooie or Perfect Dark, and nothing came close to the brilliance of The Legend of Zelda: Ocarina of Time.

I love my PlayStation, but Ocarina of Time was the most critically acclaimed title of its generation for a reason. The N64 may not have played host to too many all-time classics, but it has more than it’s fair share of hits that reinvented genres. The N64 introduced the first, first-person shooter game designed for console systems in Goldeneye. It did for the console shooter what Super Mario 64 did for platforming. The game’s controls, intricately crafted campaign objectives, and multiplayer modes paved a path for console shooters that would later dominate the market. Yes, losing the backing of RPG studio Square proved particularly costly for Nintendo but Nintendo’s record in software development and its first-party releases did not disappoint. Wave Race 64 featured realistic sound effects and ground-breaking water effects while Mario Kart 64 brought depth and verticality to the popular racing franchise. Castlevania 64 is certainly a step down from Symphony of the Night, but it is still a classic Castlevania game through and through with its great set-pieces, action, and exciting gameplay and Diddy Kong Racing is full of great ideas and fantastic boss battles. The N64 is constantly touted as hosting the greatest Wrestling games ever created, thanks to THQ and other superb third-party titles such as Spiderman, Tony Hawk, and Resident Evil 2. Add in Donkey Kong 64, F-Zero, Star Fox 64, Super Smash Bros., Majora’s Mask, and of course the Rare library, and you have yourself one of the greatest libraries of video games ever assembled for any console.

The N64 was and still is a solid platform and an important work in the history of gaming. It gave us classic titles that pushed the boundaries of what was expected of games and played a major role in introducing a new generation of kids to digital technology at the tail end of the 20th century. The Nintendo 64’s influence on modern games cannot be overstated. From first-party juggernauts to the advent of new technologies, Nintendo’s 64-bit machine has earned its place among the pantheon of gaming platforms.

And, lastly, the build quality is actually really sturdy. My N64 still works. I can’t say the same about my PS1.