My Hero One’s Justice spells the first major game adaptation of the popular manga and anime. Sure, there’s My Hero Academia: Battle For All on 3DS, but that never left Japan. My Hero One’s Justice is the first worldwide home console heavy hitter, and it shows, being more fleshed out than its bare bones 3DS predecessor. Unfortunately, whilst fun, it doesn’t come close to the heights of its source material. 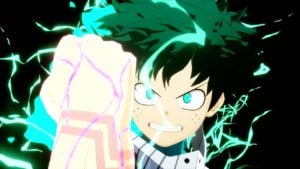 The simple mechanics, easy to perform moves and customizable controls means hopping in and kicking ass is a breeze. Like Dragon Ball FighterZ, Mortal Kombat and Super Smash Bros., complication is absent, resulting in pick up and play fun. Fights are satisfyingly tense too, and anticipating opponents’ decisions and countering successfully feels great (as does nailing a Plus Ultra move). Unfortunately, the quantity of time said opponents bound around the arena, as if wearing spring shoes, to avoid getting hit is irritating.

Unlike certain fighting games, My Hero One’s Justice offers lots to do. Story Mode is a retelling of the story (unsurprisingly), beginning with Izuku’s training under Gran Torino. Getting that elusive S rank and discovering the secret challenge in each fight is absorbing, but a retry option after battle completion would be welcome (especially considering the long load times). Make believe ‘What If’ scenarios are intriguing, but a peculiar way of padding Story Mode. 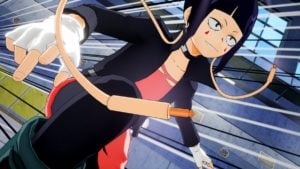 Missions are more score-centric, with gameplay tweaks like character exp. The usual suspects of Local Match, Training, Online Mode and Arcade do what they say on the tin, but really, the ace up the sleeve of My Hero One’s Justice is its bevvy of unlockables. From Gallery bits ‘n’ bobs to character outfits, playing different modes in different ways will net oodles of treats, incentivising giving every branch of My Hero One’s Justice a whirl.

But at the end of the day, it all loops back to the fighting. No matter the mode, it’s punches, kicks, quirks and tricks, which isn’t necessarily a bad thing. The problem though is My Hero One’s Justice, whilst fun, lacks the top-tier gameplay to justify its repetition. In bursts, it’s a blast, but in prolonged periods of play, tedium rears its ugly head. Personally, even with “I need to review this” bellowing in my brain, I was never itching to jump back in. 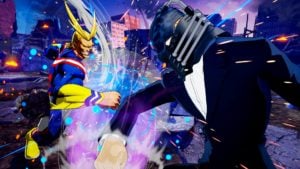 The mileage of My Hero One’s Justice depends on one’s tolerance for repetition. Huddle on the couch with your mates, because multiplayer’s great fun, but don’t expect its depth to rival other fighters on the market. Even for My Hero Academia’s gigantic fanatics, My Hero One’s Justice leaves something to be desired.