The idea that a game can be considered brilliant without offering a particularly memorable gameplay system seems almost controversial. While many RPGs are praised for their emotion driven stories and attractive art themes, exciting or enjoyable gameplay is a typical staple of this genre. Yet, this contradiction is exactly what Freebird Games’ To the Moon accomplishes. This is a game that is deceptively simple, but complex enough to create a meaningful experience. To the Moon’s roughly four hour story follows the mental struggle of a pair of scientists who work for a company that creates artificial memories for its clients. The subject throughout the game is a dying man, named Johnny, who has a simple wish: to go to the moon. The player is thus tasked with accomplishing this by travelling through Johnny’s memories in order to discover why he wishes to go to the moon.

The simplest thing about To the Moon is the way that it is played. Most of the game functions as a traditional point and click adventure would. Players are free to wander the available area until they are able to collect enough relevant memory fragments to activate a memento, a significant item that allows for travel in between memories. These sequences of exploring are interrupted by various puzzles that must be completed to progress. The majority of this gameplay, though, is unengaging by traditional standards. There are hardly any tense, exciting moments that require the player to act quickly. Nor is there an impending sense of risk or fear, as it is actually impossible to fail any of these sequences. However, the game does not require skill-based or provoking gameplay in order to be successful. It can consistently keep the attention of players through masterful thematic development. Clicking across the screen in wonder of what secrets each memory sequence could contain is a genuinely interactive experience that allows players to truly feel the weight of their environment. 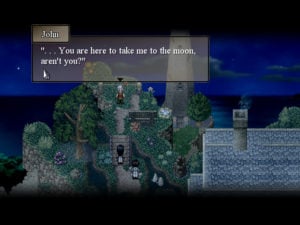 This is where the complexity of To the Moon is at its clearest. The use of the RPG Maker XP engine allows for a world of retro charm that can compete to immerse players. Even the game’s simplest animations are heavy with tremendous detail, such as rippled bark on trees and notched floorboards. The game’s audio is an even stronger force. From simple, two-note ambient sounds and emotionally invasive piano pieces, it is difficult to not feel a rushing chill during many of the story’s thematic music. To the Moon is partly successful because it exceeds the representative quality that is expected of RPGs. It should even be considered criminal to play To the Moon with muted sound. 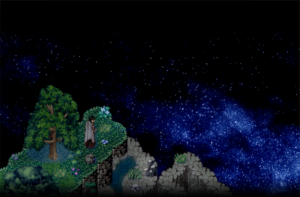 Clever writing is undoubtedly the game’s greatest feature. Almost every piece of dialogue in To the Moon is either emotionally or comically powerful. The most influential moments of any playthrough will be inspired by the interactions of the characters. Being an excellent example of tragic comedy, the more psychologically impacting moments are met by equally hilarious antics among the cast. This game is not afraid to dissect or pause its thematic structure in order to cause players honest laughter. The breakout comedians of the game are assuredly its playable characters, Dr. Eva Rosalene and Dr. Neil Watts. Viewing the commentary that each offers, usually in regards to the misfortunes of Johnny’s past, ensures an enjoyable break from a serious tone. Moreover, these self-aware characters are able to deliver lines that range from simple wordplay to comments that are referential of real-world culture.

Of course, it is these serious moments that make up the majority of the game. Despite this, never does this game feel as if it is forcing characters to express emotions through awkward or clichéd speech. The game feels dedicated to challenging players’ expectations of what will be said and done by each character, constantly delivering fresh material. For this reason it is not rare to find an investment in a character that was only portrayed for even a few minutes. The narrative of the game is outstanding in its ability to be effective. While several plot points were not difficult to predict, To the Moon offers many cryptic, surprising moments that are sure to entertain even the most critical of players. The entirety of the plot will be difficult to separate from, on an emotional basis, and will issue players a craving for more work of this quality.

To the Moon is a wonder in gaming because it achieves a feat that similar games struggle with: it is a game that takes charge in engaging players. Playing this game is an effortless adventure that is rewarding in its own league. It can be expected to discover a product that is not only story driven, but also interpretive. Creating an atmosphere such as this affirms the fact that this is an age where complexity is still achievable with simple tools. This is a game that reminds society of the artistic potential of video games as interactive story-telling tools. Playing the game’s short campaign is not only a recommended experience, but also one that is required of any individual that enjoys viewing a captivating story and a refreshing encounter.